A Trump administration official went to Hungary to speak about anti-Semitism. Another speaker delivered an anti-Semitic rant. 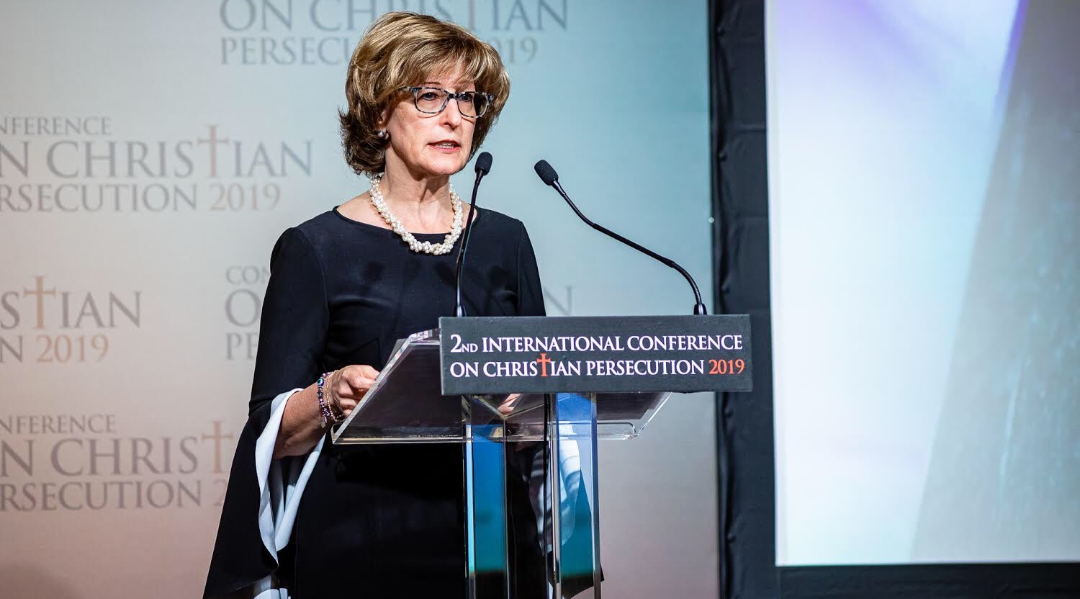 Bonnie Glick, the deputy administrator of the U.S. Agency for International Development speaks in Budapest to a conference on the persecution of Christians, Nov. 27 2019. (U.S. State Department)
Advertisement

WASHINGTON (JTA) — A Trump administration official went to a conference in Hungary on persecuted Christians in part to remind attendees that Jews also face threats, but someone else did the job for her.

Bonnie Glick, the deputy administrator of the United States Agency for International Development, was horrified at a 13-minute speech by Gebran Bassil, the Lebanese foreign minister, who claimed that Israel is a malign theocracy akin to the Islamic State and Al Qaeda.

Glick, who is Jewish, saw it as an opportunity to illustrate a point she was making in her own speech, that Jews in Europe and elsewhere are targets of a broadening anti-Semitism.

“Its when it’s mainstreamed like that it’s so toxic,” Glick said.

The Second International Conference on Christian Persecution was held in Budapest Nov. 26-28, and included a speech from Hungarian Prime Minister Viktor Orban. In an interview, Glick said she attended to make a point she suggested that the conference’s Hungarian government organizers were missing: It’s not just Christians who are persecuted.

“If I’m going to Hungary the week before Thanksgiving I want to talk about something that is of interest to the broader U.S. government rather than the narrow scope of Hungary,” she said. Her intention, she said, was “amplify that the plight of religious minorities is not uniform.”

Glick’s speech was of a piece with President Donald Trump’s recent efforts to more aggressively counter anti-Semitism after facing accusations from Democrats and some Jewish groups that he had neglected — and even encouraged — bigotry against Jews. Earlier in December, Trump signed an executive order targeting campus anti-Semitism.

Glick’s speech focused on joint Hungarian-U.S. aid programs targeting Christians in Iraq. And she praised the Hungarians for recently expanding their assistance to a non-Christian minority in the region, the Yazidis.

But she also devoted a chunk of her speech to the growing threat of anti-Semitism around the world, including the United States. She scorched European nations for distinguishing between anti-Zionism and anti-Semitism, particularly the policy — common across most of the continent — of distinguishing between the military and civilian wings of Hezbollah, the Lebanese militant group.

On Dec. 12, the day after Glick spoke with the Jewish Telegraphic Agency, Bloomberg News named Glick as part of a group of hard-liners within the Trump administration withholding aid from Lebanon.

Tensions over the role of Iran in the region appeared to inform the stark differences between Bassil’s speech and Glick’s speech.

Bassil’s speech was, in effect, an attempt to avoid naming Iran as one of the bad actors making life miserable for the Middle East’s minorities. Instead, he blamed Sunni extremists, Jews, Israel and, in a singular leap of logic, western nations for accepting as refugees Christians fleeing the violence, which he argued, was depleting the region of its ancient Christian minority.

“Domestically, remember, inside Iran, the Islamist regime persecutes not only Jews but also Baha’is, Christians and even Muslims who dare to question the government,” she said in her speech. “Globally, Iran is the world’s No. 1 sponsor of terrorism.”

Glick felt she won the argument.

“It was incredibly positive,” she said. “I had people, mostly Christians, Europeans, Middle Easterners, thanking me for speaking about anti-Semitism.”

Glick did not address tensions between western countries, including some in the U.S. government, and Hungary’s government over its own treatment of minorities, including Roma, and the perception that under the leadership of Prime Minister Viktor Orban, expressions of anti-Semitism have increased.

“I wasn’t there to zing the Hungarians,” she said.

But she pointedly noted that she visited a small museum, the Holocaust Memorial Center, dedicated to the horrors of the Holocaust, and not the House of Terror, an institution that likens the Nazi Holocaust to the predations Hungarians suffered under communism, and which has been criticized by human rights and Jewish groups. Both institutions are state-funded.

“This is a legitimate museum,” she said of the Holocaust Memorial Center. “The Terror House is designed to evoke emotion and,” she said with a sigh, “it gets far more visitors.”