What is causing the rise in anti-Semitism in New York? 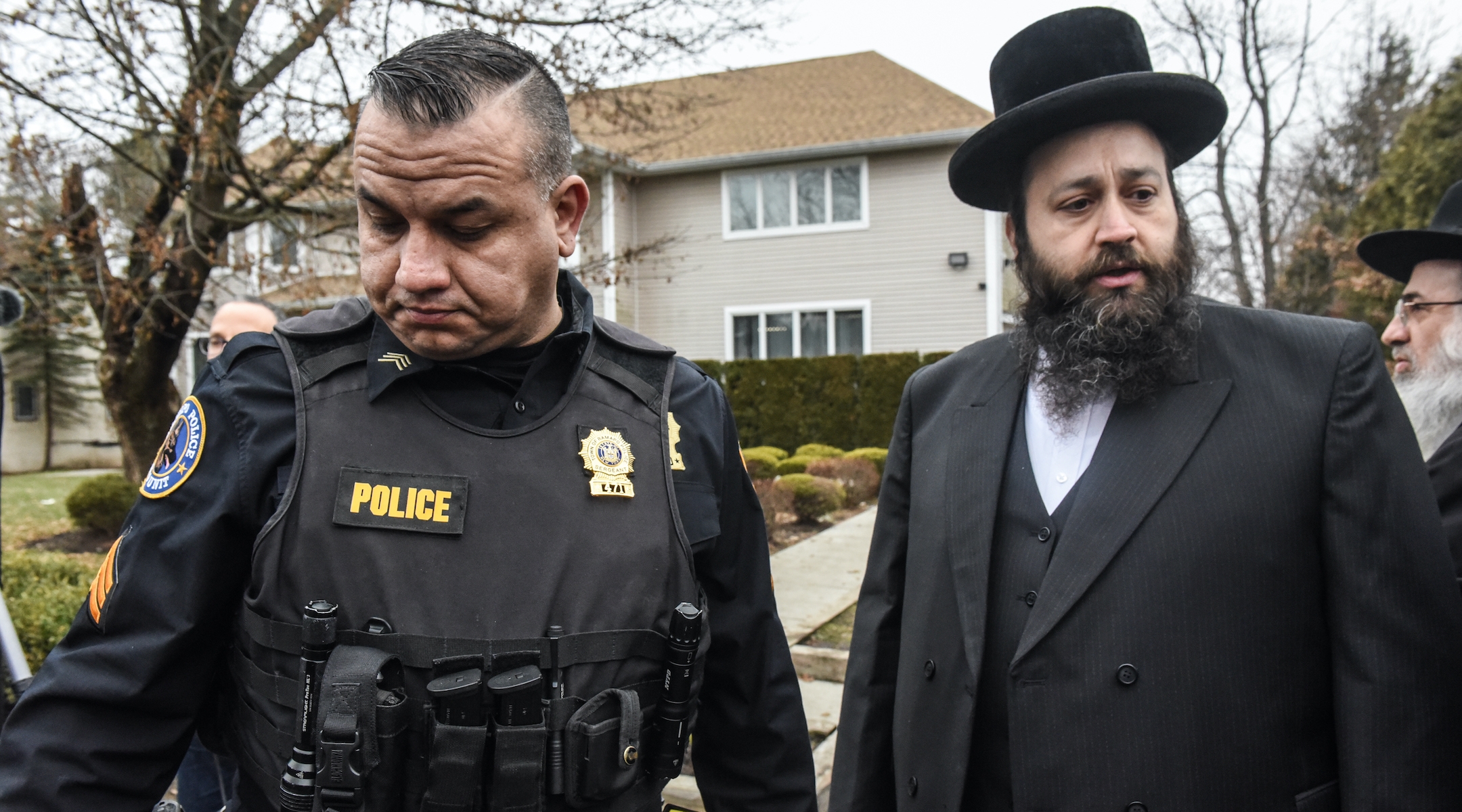 A member of the Ramapo police stands guard in front of the house of Rabbi Chaim Rottenberg in Monsey, N.Y., Dec. 29, 2019. (Stephanie Keith/Getty Images)
Advertisement

NEW YORK (JTA) — For weeks, anti-Semitic attacks have been surging in and around New York City — from assaults in Brooklyn to the shooting in Jersey City to the recent stabbing in Monsey on Hanukkah.

What’s still unclear is why the spike is happening now — and whether the attacks are connected.

But in most cases, the attackers have not stated a clear reason for their attacks. Unlike the anti-Semitic gunmen in Pittsburgh and Poway, who both wrote white supremacist manifestos before the shootings, the attackers in Monsey, Jersey City and elsewhere have not tried to justify their anti-Semitism with an ideology.

“They all had one common theme, which was the hatred of Jews and that’s the common thread here and that’s what we have to keep our eye on,” said Evan Bernstein, the New York/New Jersey regional director at the Anti-Defamation League. “It’s not any one particular group, it’s a myriad of people. Anti-Semitism is affecting all parts of our society.”

That lack of clarity has left law enforcement, officials and communal leaders with the task of trying to piece together motives based on clues, context and the suspects’ backgrounds. In the Jersey City shooting, the attackers had expressed sympathy with the Black Hebrew Israelites, a movement of African-Americans who believe they are descended from the biblical Israelites. Some of the movement’s adherents espouse virulently anti-Semitic views.

The suspect in the Monsey attack also referenced the movement in his journal, according to a criminal complaint, as well as Hitler and the Nazis.

The anti-Semitic attacks in Brooklyn, meanwhile, have occurred in neighborhoods, like Crown Heights, where there has been historical tension between black and Jewish residents. That peaked during the 1991 Crown Heights neighborhood after a car in a motorcade carrying Chabad Grand Rabbi Menachem Mendel Schneerson struck two black children, killing one and severely injuring the second. Some black youths responded by attacking Jews in the area, killing a young Orthodox man, as well as looting and damaging Jewish homes.

NYPD data obtained by the Jewish Telegraphic Agency show that 60% of people arrested in New York City from January through September of 2019 for committing anti-Jewish crimes were white. A third of those arrested were black. The NYPD data does not break down incidents by type of crime, such as vandalism, which represents the vast majority of incidents, as opposed to to assault. JTA has made multiple requests to the NYPD to get a breakdown of the type of incident but has not received the data.

While police data is not available, judging from news reports and other sources it appears that many — but not all — of the assailants in the incidents of harassment and assault in Brooklyn have been African-American.

Eric Ward, an anti-racist activist who is African-American and frequently speaks about the danger of anti-Semitism, says Orthodox Jews in Brooklyn live in many of the same neighborhoods as black people and are sometimes turned into scapegoats for racism and other societal challenges.

“Black people aren’t in poverty and racial segregation because of the ultra-Orthodox community,” he said. “They are facing those things because of longstanding white supremacy in New York, in terms of policies and in terms of values. The problem is that there is a segment of black population who believes that Jews can be targeted out of those frustrations, and when bad interactions happen between the ultra-Orthodox and the black community it reinforces to that smaller part of the black population that their anti-Semitic beliefs are justified.”

Earlier this year, the ADL found that 2018  saw the third-highest number of anti-Semitic incidents since 1979.

“We’re seeing in the United States a general rise in the acceptance of anti-Semitism, and it is playing out across the political spectrum and across society,” Ward added.

Some of the assaults may be copycat attacks. Michael Masters, the director of the Secure Community Network, a group that coordinates safety issues for the Jewish community, said there is always a concern of social contagion, in which individuals may be influenced by the views of prior attackers — such as the Black Hebrew Israelites — to also commit assaults.

“I think that we have to recognize that there is not a monolithic individual or group that dislikes us,” he said, noting that threats come from both domestic and international terror groups as well as those inspired by Islamist extremism, white supremacy and the Black Hebrew Israelite movement.

Black and Jewish community leaders have attempted to bridge divides between the two groups with mixed success. Pastor Gil Monrose, who leads Mt. Zion Church of God 7th Day, a predominantly black church in Brooklyn, has worked for years to bridge ties between black and Jewish Brooklynites, and has organized Israel trips for Brooklyn pastors. He draws comfort from the longstanding relationships he has been able to build.

“We are confident that we will get through this together,” said Monrose, who serves as the director of faith-based and clergy initiatives for Brooklyn Borough President Eric Adams, “because we’re working on these types of issues for many, many years together.”