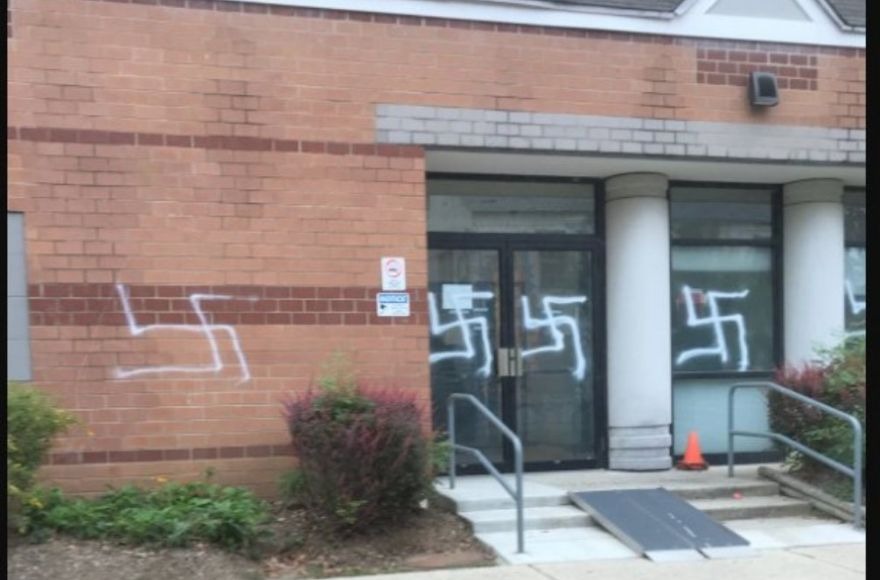 Swastikas spray painted on the outside of the Jewish Community Center of Northern Virginia, in Fairfax, Va. on Oct. 6, 2018. (Courtesy/World Zionist Organization)
Advertisement

(JTA) — Last year saw the third-highest number of anti-Semitic incidents since 1979, despite a decrease from the previous year, according to a new report by the Anti-Defamation League.

Though the 1,879 incidents in 2018 dropped from the 1,986 incidents in 2017, according to the ADL’s annual survey of incidents released Tuesday, the number of anti-Semitic assaults more than doubled, to 39 from 17.

The report counts cases of assault, harassment and vandalism. The vast majority of the incidents last year were harassment or vandalism — 1,066 and 774, respectively.

According to the report, the last three months of 2018 were “unusually active” in terms of incidents. The shooting at Pittsburgh’s Tree of Life synagogue at the end of October “likely drew more attention to anti-Semitic activities,” the ADL said.

The highest number of anti-Semitic incidents occurred in 1994 and the second highest in 2017. Last year’s number matches the total for 1991, the third most recorded in one year. The organization has been measuring anti-Semitic crimes annually since 1979.

The report referenced the shooting at a Chabad synagogue in Poway, California, on Saturday, in which an assailant killed one and wounded three.

“We’ve worked hard to push back against anti-Semitism, and succeeded in improving hate crime laws, and yet we continue to experience an alarmingly high number of anti-Semitic acts,” ADL’s national director, Jonathan Greenblatt, said in a statement Tuesday. “We unfortunately saw this trend continue into 2019 with the tragic shooting at the Chabad synagogue in Poway.”