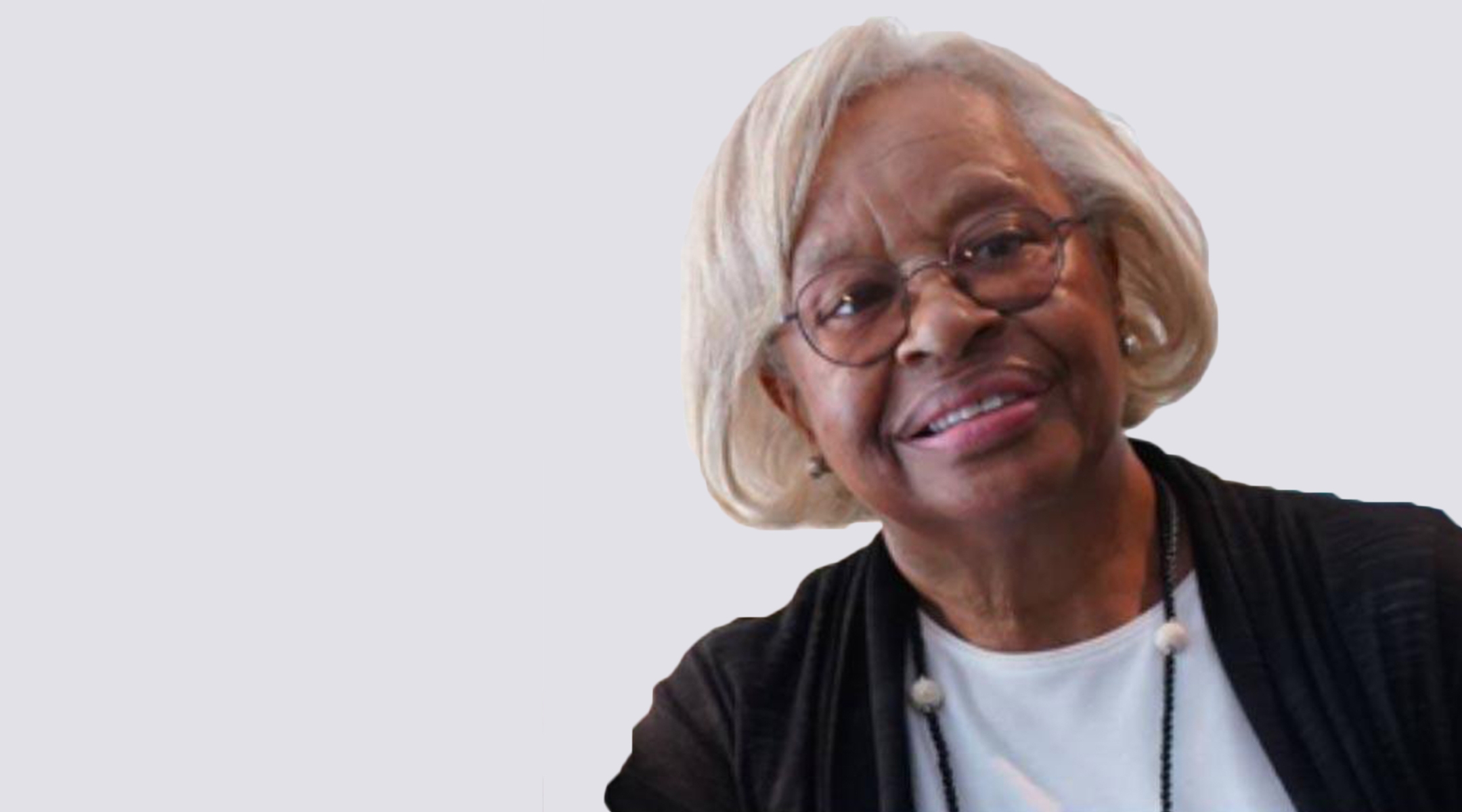 NEW YORK (JTA) — In the days after a local official responded to the Jersey City shooting by calling local Jews “brutes” and expressing sympathy for the shooters, it appeared that pressure was quickly mounting for her to resign.

Jersey City Mayor Steven Fulop called for her to step down. So did New Jersey Gov. Phil Murphy. The president of the Board of Education, Sudhan Thomas, told reporters he would introduce a resolution at the next meeting censuring her and asking her to resign.

Three weeks later, Board of Education member Joan Terrell-Paige is still in her post and it doesn’t look like she’s going anywhere.

Terrell-Paige’s staying power comes from a mix of neighborhood support and circumstance. Local politicians and residents have spoken out in her defense, while her opponents are powerless to oust her as an elected official. At its meeting last week, the board took no action to remove her. Her term runs through the end of the year.

Terrell-Paige’s comments came five days after the Dec. 10 shooting, in which two attackers entered a kosher supermarket and killed three people after having already killed a policeman. In response to an article in Insider NJ titled “Faith and Hope to Fight Hate,” Terrell-Paige wrote that Jewish residents of Jersey City were harassing and intimidating their black neighbors, threatening to bring drug dealers and prostitutes to the neighborhood. She referenced a case from 2009 in which a Jewish man named Solomon Dwek pleaded guilty to participating with rabbis in a scheme involving the illegal sale of kidneys.

“Where was all this faith and hope when Black homeowners were being threatened, intimidated and harassed by I WANT TO BUY YOUR HOUSE brutes of the jewish community?” Terrell-Paige wrote, according to a screen shot of her post that was circulated on social media. “They brazenly came on the property of Ward F Black homeowners and waved bags of money.”

Terrell-Paige wrote that she was speaking as a private citizen, not in her capacity as an elected official, and later deleted the post. She has not responded to multiple calls and emails for comment. 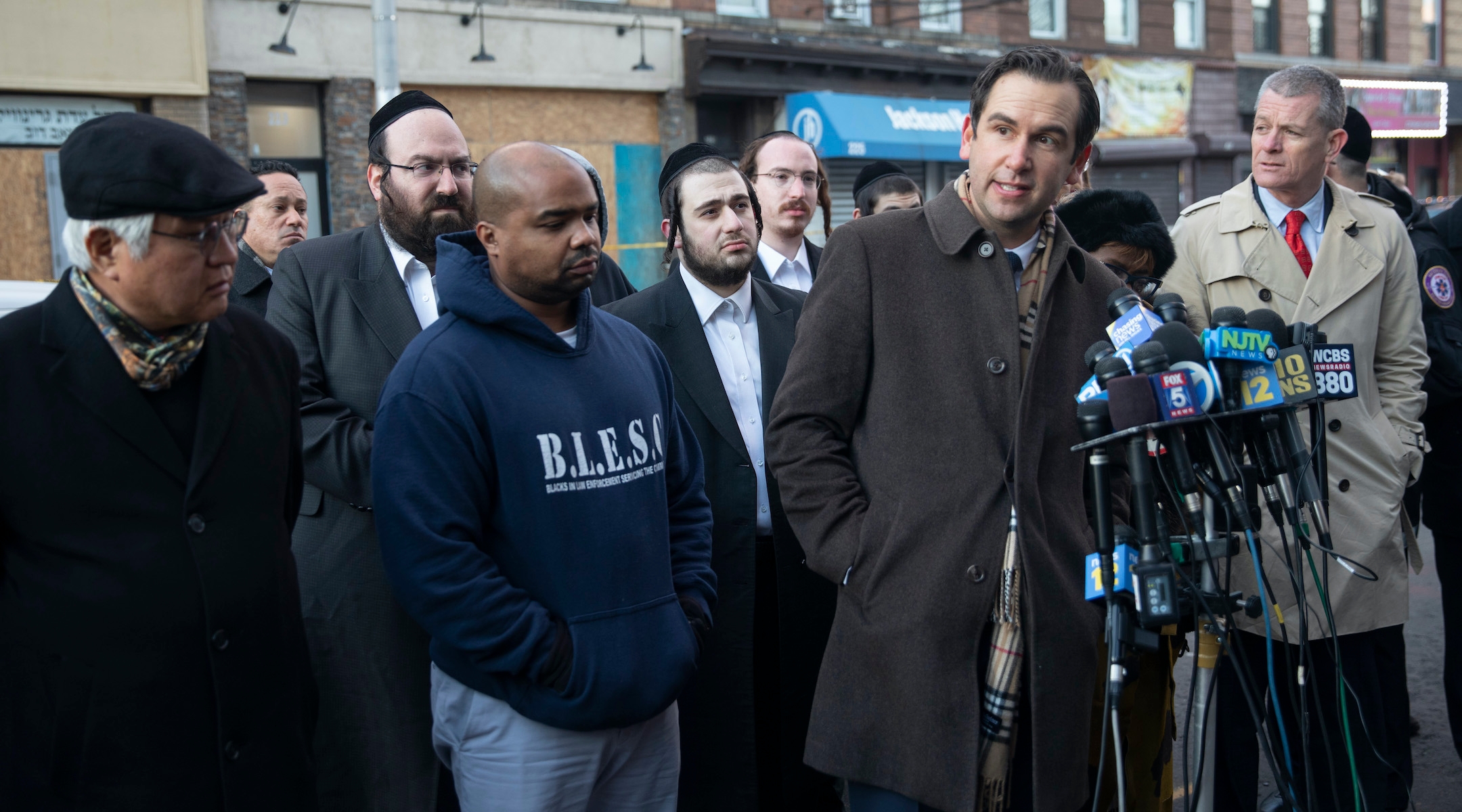 Jersey City Mayor Steven Fulop speaks to reporters at the scene of the shooting at a kosher market, Dec. 11, 2019. (Jennifer Brown/City of Jersey City)

Calls for her resignation came quickly, and the governor tweeted that “We will not let anti-Semitism and hate go unchallenged in our communities.” Thomas, the Board of Education president, said he would introduce a resolution asking for Terrell-Paige’s resignation at a Dec. 19 meeting.

But then Thomas announced that the meeting would be canceled for “security” reasons. Some 50 children were scheduled to perform at the meeting and Thomas said the cancellation was “made in their best interests.” Both supporters and opponents of Terrell-Paige were planning to attend and voice their concerns, according to the Hudson County View, a local paper.

“Rather than hastily demanding her resignation, this was an ideal moment for our locally elected to sit down with Mrs. Terrell, clarify her statements, and be prepared to demonstrate empathy,” said John Flora, a Democratic candidate for Congress, according to Insider NJ.

“While we do not agree with the delivery of the statement made by Ms. Terrell-Paige, we believe that her statement has heightened awareness around issues that must be addressed and should be a topic of a larger conversation by two communities that have already and must always continue to coexist harmoniously,” the caucus said in a statement posted to Facebook and signed by several local and state lawmakers.

When the Board of Education meeting did take place on Jan. 2, it was under new leadership. Thomas has been forced off the board after being charged with bribery. The new board president, Lorenzo Richardson, has not taken up the mantle of censuring Terrell-Paige and did not introduce any resolution to that effect at the meeting. In an email exchange with JTA Monday, he twice declined to say whether he planned to do so in the future.

The meeting did feature extended discussion of Terrell-Paige’s comments — most of it in her defense. According to video of the meeting from a the Hudson County View, a succession of speakers defended her from charges of anti-Semitism. Some endorsed the comments in the Facebook post. One speaker, Darren Martin, called Terrell-Paige the “Rosa Parks of this era.”

“She has an impeccable record in this community,” Martin said. “The anti-Semitic label is a bunch of crap, throw it away, and she’s not resigning.”