Teens at a mostly African-American school in Brooklyn have questions about Jews. A Holocaust class provides some answers. 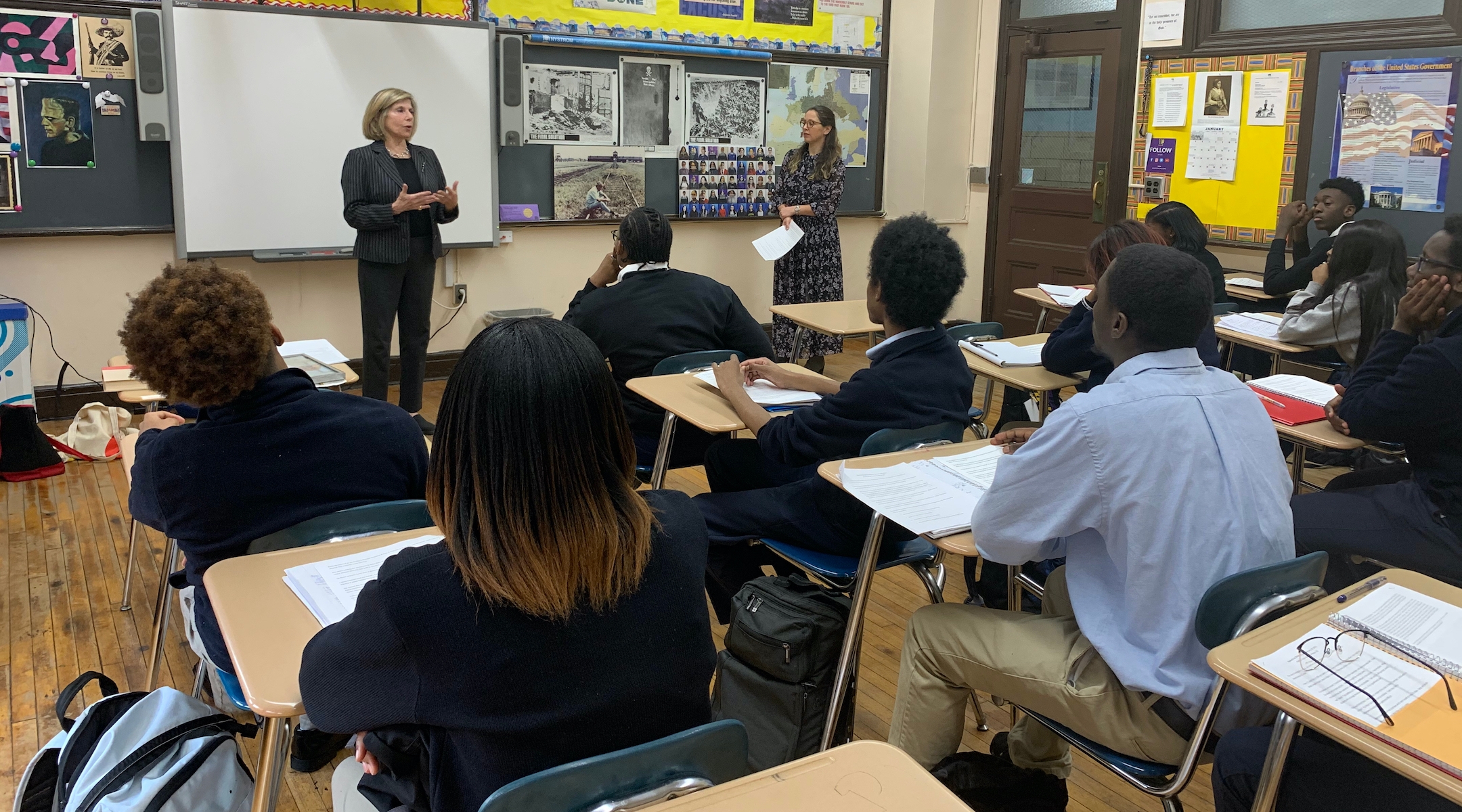 BROOKLYN (JTA) — Though Naisha Couamin walks through a heavily Jewish neighborhood near her home in the East Flatbush section of Brooklyn most days, she had never actually talked to a Jewish person until recently.

The 17-year-old had plenty of questions about the Hasidic Jews who were her neighbors. She wondered why they wore distinctive clothing and why the men kept their side locks long. But a sense that the community was insular and concern about the language barrier — many Hasidic Jews in Brooklyn speak Yiddish better than English — kept her from inquiring.

“You always see Jewish people, they always had a secluded area, they were never with other people,” said Couamin. “You see they have their own school bus, their own ambulance, and I always wondered why.”

Couamin began to get some answers after enrolling in a Holocaust class at Bishop Loughlin Memorial High School, a majority African-American Catholic school in the Fort Greene section of Brooklyn. The class exposed her to lessons about the history of the Holocaust, including hours of recorded testimony from survivors. But it also gave her a chance to ask questions about Judaism she had never had a chance to before.

“A lot of our students live in Crown Heights and Williamsburg, on the borders of Orthodox Jewish communities, and they notice the friction between the two groups and they don’t understand why,” said William Mason, a social studies teacher who started the Holocaust class five years ago. “So they’ll have a lot of questions about Jewish culture and Jewish ideas.”

The class is a popular one — Mason says it fills up every semester and has a waiting list — and is based on curriculum provided by the Anti-Defamation League and Yad Vashem, Israel’s national Holocaust memorial in Jerusalem. In the spring, students in the class meet a Holocaust survivor in person during a visit to the Museum of Jewish Heritage — A Living Memorial to the Holocaust, in Manhattan.

On Wednesday, the 14 students in the class listened respectfully as Amy Goldberg, the wife of the late Holocaust survivor Ernest Michel, related her husband’s harrowing story of surviving Auschwitz and two death marches. Students heard excerpts from a speech Michel had given in 2012 about witnessing the Kristallnacht riots in his hometown and how his talent with calligraphy helped him survive. Goldberg offered personal anecdotes about what it was like for her husband to cover the Nazi trials at Nuremberg as a journalist and why he refused to cover up his Auschwitz tattoo. 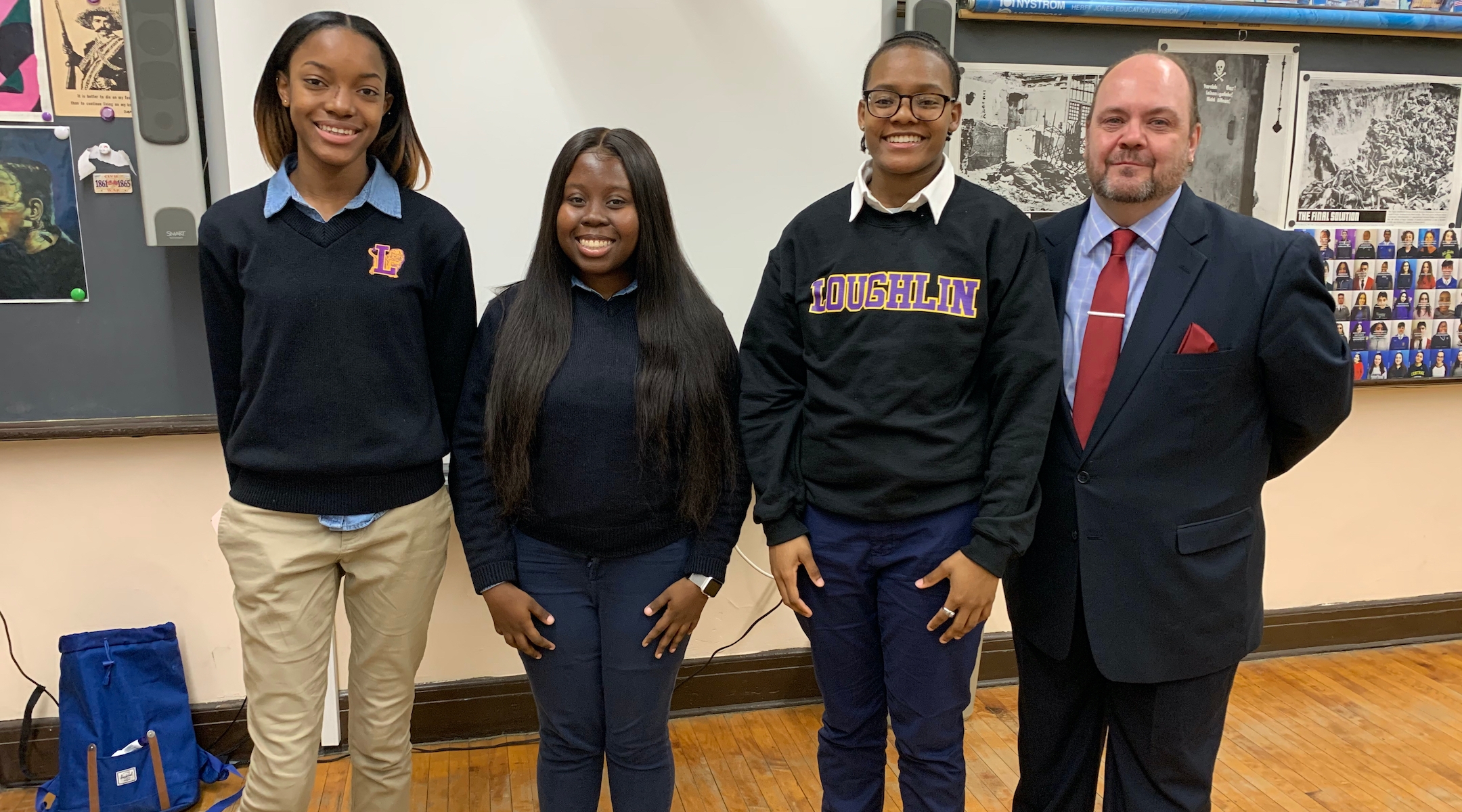 “I used to think that it was really a long time ago and then when I got into this class I was like ‘Oh, there’s people still alive that this happened to,’” said Jermeria Pantoon-Whitehead, 17. “And it made it different for me when I was learning about it.”

Mason doesn’t steer away from discussing recent instances of anti-Semitism, including the attacks on Jews in Brooklyn, Monsey and Jersey City in the last month. Learning about anti-Semitism in the past also helps students feel closer to the Jewish community today, Mason said.

“They relate to that because they’re also subject to all this nonsense that goes on, and you’re no longer at odds. You’re now allies,” he said. “And we talk about the concept of ally, and remind the students during the Civil Rights era, who was the biggest supporter of the African-Americans? The Jews. It was like this from day one, and the kids understand that now.”

Goldberg’s visit was organized by Lindsay Bressman, the director of Civic Spirit, which supports civic education in Jewish and Catholic schools. Bressman believes teaching students about the Holocaust is especially important today.

“This is part of a bigger story,” Bressman said. “And I think it’s important for these students who never learn about that to understand that when Jews see in the news these targeted killings, they think about the Holocaust, they think about the Spanish Inquisition and the many times that thousands of Jews were killed.”

Lessons about the Holocaust also have a personal impact on many students. Nah’eema Walker, 17, says she was inspired by Goldberg’s description of her husband’s ability to enjoy life despite the suffering he endured and having lost most of his family.

“For him to be able to live a life not angry shows a lot of courage and strength,” Walker said. “Because me being African-American and I see what goes on today — it’s not physically happening to me, but sometimes I get angry and I hold on to that anger, and I may judge a random police officer or regular Caucasian people. So for him to be able to live his life with no hatred is amazing.”