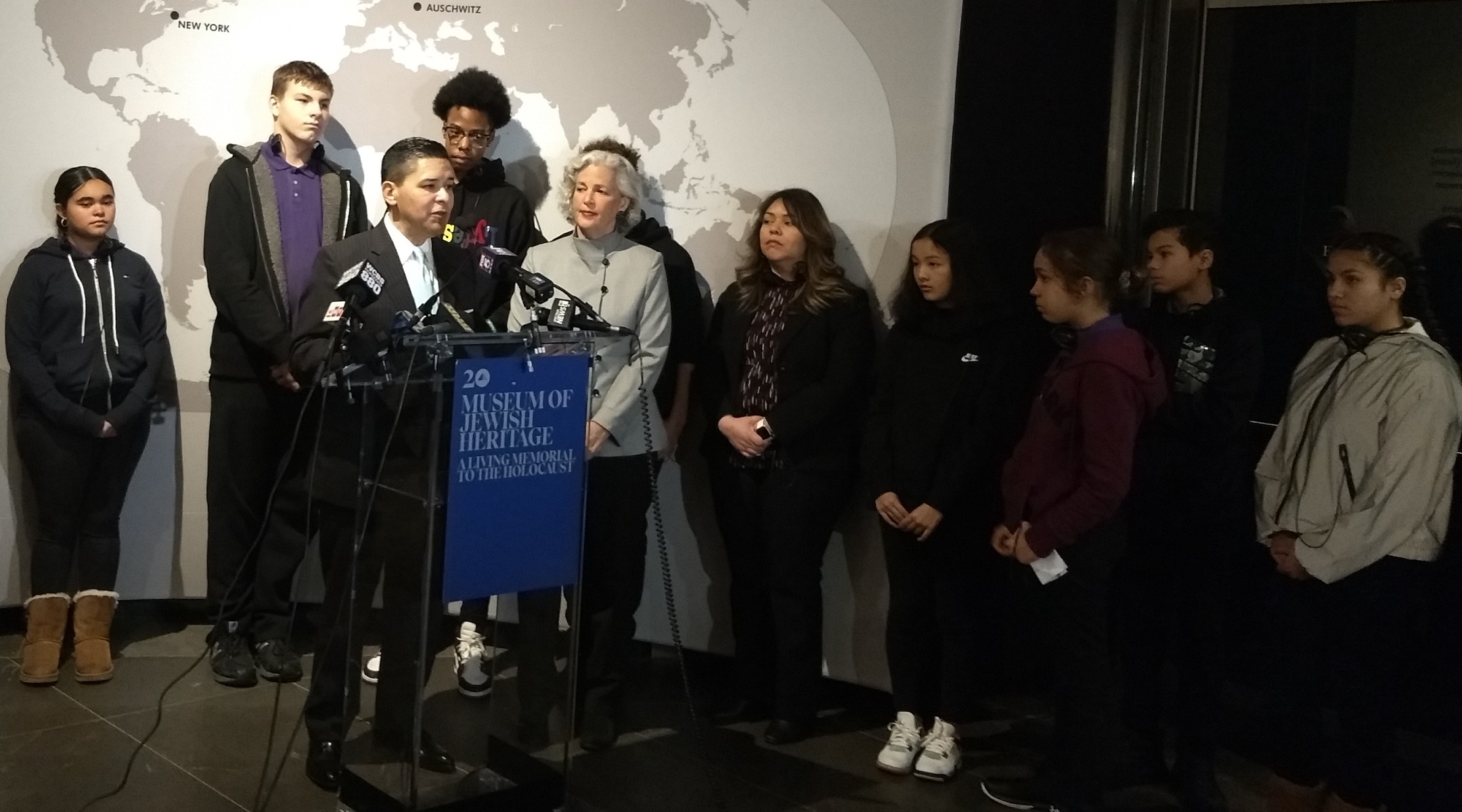 NEW YORK (JTA) — Jyrell McGriff, an African-American eighth-grader who lives in the Williamsburg section of Brooklyn, doesn’t interact much with the many Orthodox Jews who share his neighborhood.

He sees them on the street or on buses. He also has fond memories of a Jewish teacher from years ago.

Jyrell has trouble understanding the current wave of anti-Semitism cresting over New York City, much of it in his home borough.

“I know about what Hitler and the Nazis did to them, and I felt bad actually for them because they’ve been through a lot,” the 13-year-old said of the Jewish people.

Regarding the current anti-Semitism, Jyrell said, “They’re basically getting attacked for no reason and they didn’t do anything to people who were attacking them. They’re good people. There’s no reason to do that to them.”

On Wednesday, Jyrell was among the dozens of eighth-graders from a Williamsburg public school who toured this city’s Holocaust museum. They viewed artifacts like the shoes of victims or an SS helmet, and heard about how economic uncertainty in Germany led to anti-Semitic discrimination and then genocide.

Nearly two-thirds of the anti-Semitic incidents in New York are committed by young people, according to Mitchell Silber, UJA-Federation of New York’s top security official. The goal of the field trip was to give Jyrell and his classmates a deeper understanding of the Holocaust in the hopes that education will help prevent anti-Semitism in Brooklyn and elsewhere.

It was the pilot of a program that will bring public school students from three heavily Orthodox neighborhoods to the Museum of Jewish Heritage-A Living Memorial to the Holocaust in downtown Manhattan. Eighth- and 10th-graders from Williamsburg, Borough Park and Crown Heights will take the tours, and the museum will also offer free admission to any New York City public school student and three family members.

Teachers have been given resources on how to teach about hate. The museum also will provide professional development to teachers.

“What you’re going to learn today is critically important to who we are,” New York City Schools Chancellor Richard Carranza said at a museum news conference announcing the initiative, adding that he first understood the impact of the Holocaust after appearing in a grade-school play about Anne Frank as the famed diarist’s father, Otto.

“We expect you to lead the way in creative, thoughtful and productive dialogue about the value of living in a diverse and accepting city,” he said.

Carranza was not aware of empirical data showing that Holocaust education leads to a reduction in hate crimes. But he did say that the museum shows students how hateful words and symbols can escalate. He said one of the motivators of the current string of attacks is ignorance of anti-Semitism’s lethal history.

“The first step is just understanding that symbols have meanings,” he said. “Don’t use these kinds of symbols if you don’t know what they mean. When you use a swastika, it has a very specific meaning, it stands for something.”

Deborah Lauter, who heads the city’s Office for the Prevention of Hate Crimes, turned to the students, who were mostly people of color, and asked if they have ever been slurred by an epithet. A few raised their hands.

Some of the students were guided on their tour by Abraham Foxman, the former longtime director of the Anti-Defamation League. Foxman, who was hidden as a child during the Holocaust, told the Jewish Telegraphic Agency that the visit should be seen as a first step toward understanding hate, not as a cure-all for juvenile anti-Semitism.

“It’s a virus that can be infected very quickly,” he said. “Unlearning is a much longer process. Education is a patient, long-term process.

“Can one visit undo it? No. But we hope that the personal experience of confronting what hate can do will impact students to say, ‘It matters to me as well.'”