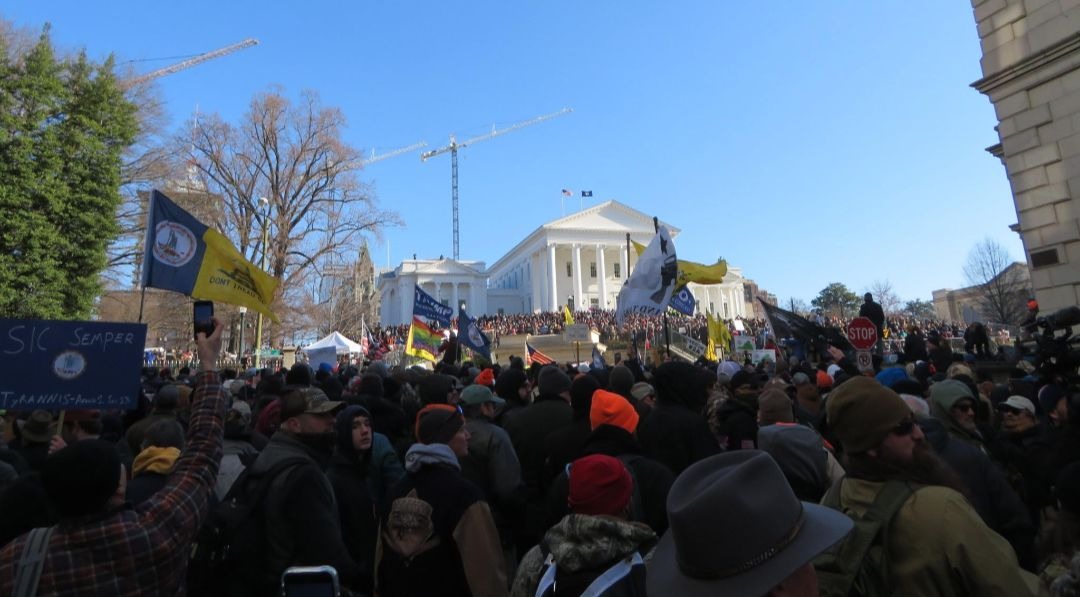 RICHMOND, Va. (JTA) — Hedy Lapkin’s boyfriend wanted to attend the pro-gun rally in this capital city, but she had reservations.

Lapkin was busy anyway: She was volunteering at the annual Richmond Jewish Food Festival at the Jewish community center about five miles up the road from Capitol Square, the site of the rally. Some 20,000 people met there on Monday, Martin Luther King Jr. Day, to protest gun control proposals by Virginia’s newly Democratic legislature.

She explained to her boyfriend, a Republican, why it made no sense for her to go: She’s a liberal, she votes Democratic and she’s Jewish.

There were reports before the rally that white supremacists would disrupt it, and there were fears the demonstration would turn violent — possibly even deadly, like the far-right rally about an hour away in Charlottesville in 2017.

The fears did not materialize. A Jewish Telegraphic Agency reporter at the rally saw just a single poster using a racially charged term, one  Confederate flag and a scattering of camouflage-clad militia members armed with assault rifles. Social media turned up a couple of white supremacists.

Infowars, the conspiracy-mongering website beloved by the far right, and its armored vehicle turned up, but one of its “reporters” pushing through the crowd talked mostly to himself.

The vast majority of protesters were peaceful and armed only with the conventional slogans of activists whose agenda is upholding the Second Amendment, the right to bear arms. Virginia, which already has a Democratic governor in Ralph Northam, flipped its House and Senate in November elections to Democratic.

In the first weeks of this year, Northam and the Democratic majorities proposed a number of restrictions on gun purchases and possession, including increased background checks and the ability for localities to enhance restrictions on ownership.

“We will not comply” and “Don’t Tread on Me” proliferated among the banners on display. “USA!” was a repeated chant. There was plenty of material lauding President Donald Trump for upholding gun ownership protections. 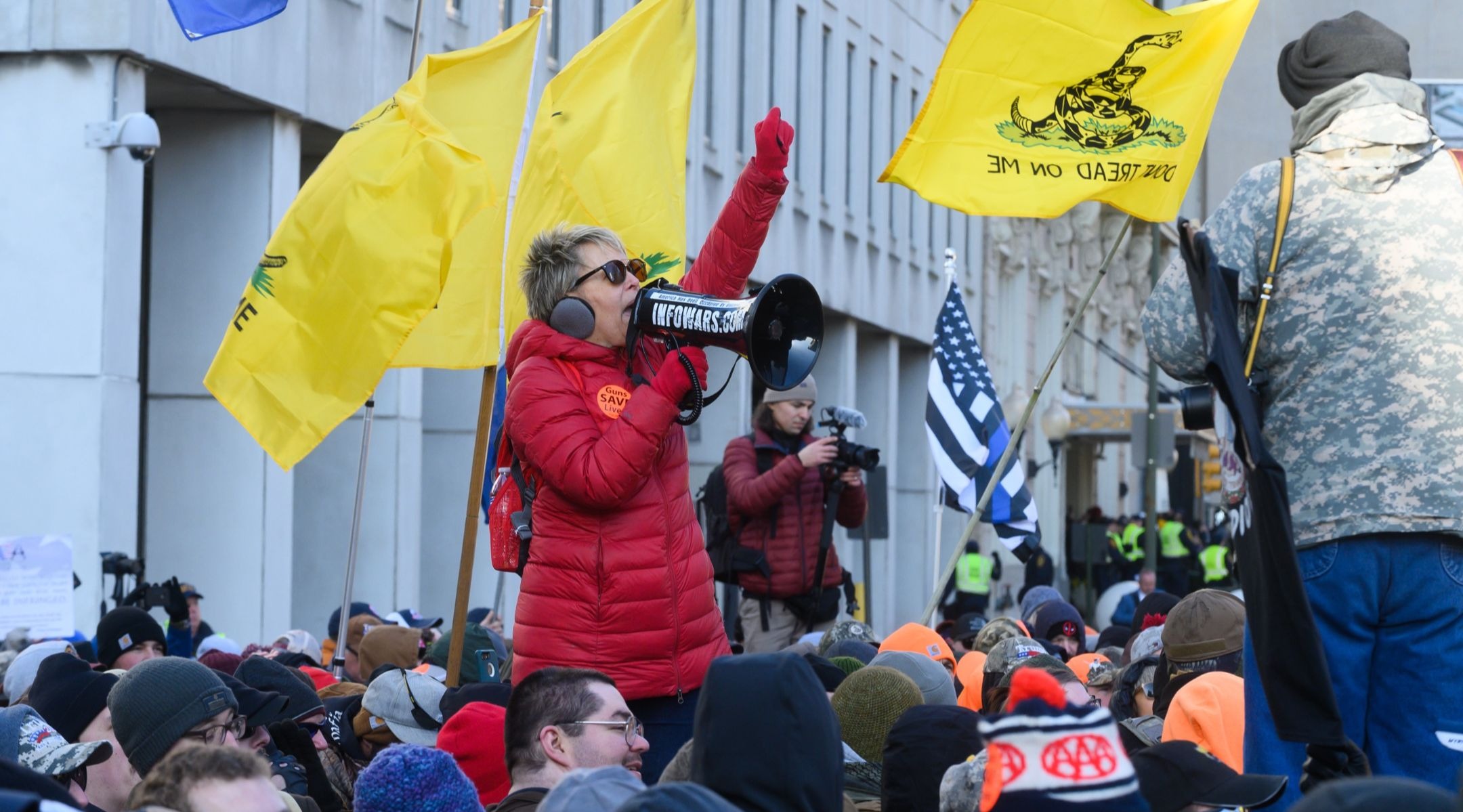 A pro-gun rights demonstrator in Richmond speaks into a megaphone featuring the web address of the far-right Infowars site, Jan. 20, 2020. (Zach D. Roberts/NurPhoto via Getty Images)

To the degree that there was a race component to the rally, it was in efforts by some of the protesters to co-opt anti-racist rhetoric as compatible with gun rights. A number of banners referred to Alabama’s rejection in 1956 of King’s application for a concealed carry permit after his house was bombed. (King later said that he reconsidered and thought that possessing guns was counter to his message of nonviolent resistance.)

The organizer of the rally, the Virginia Citizens Defense League, urged participants ahead of the rally to be peaceful and respectful.

“We cannot stress enough that this is a peaceful day to address our Legislature,” a guide for participants said. “IF YOU SEE A BAD ACTOR flag down a police officer and point it out.”

“I think the media tried to beef it up to make it look like we’re all that way — and we’re not,” said a protester named Wendy, who was holding up a sign noting King’s troubles with concealed carry. “The Second Amendment is a unifying force whatever your sex, your race.”

Wendy, from West Virginia, did not give her last name in order to avoid trouble with her employer.

Will Wampler, a Republican lawmaker in the Virginia House of Delegates, urged the crowd to “keep up the energy” and pledged that his party would retake the state’s government in 2021.

Concerns were stoked in part because a number of violent white supremacists were arrested ahead of the rally, some of whom had planned to disrupt it. Northam declared a state of emergency and banned weapons from the immediate vicinity of the state Capitol.

National Jewish security officials were on alert and coordinated with Richmond Jewish officials to enhance security.

Daniel Staffenberg, the Richmond Jewish Federation’s CEO, said the JCC briefly considered whether to cancel its food festival, but decided against — it’s seen as a key annual moment of outreach to the wider community. The majority of the festival’s participants, which numbered some 10,000 this year, are not Jewish.

So the food festival went ahead with 1,600 pounds of brisket, 500 pounds of shawarma, 150 gallons of matzah ball soup and a pumpernickel-flavored beer manufactured specially by a local microbrewery.

For the first time, said Diane Goldberg, who has organized the festival for 13 years, bomb-detecting dogs patrolled the event — part of the enhanced security triggered by the gun rally.

“The dogs did a double-take at the pickles,” she said. “Apparently pickles set them off.”

Marge Pritchett, a retired librarian who is not Jewish, was grateful for an opportunity to hang out with her husband and another couple, and not think about the political tensions five miles away.

“I loved the latkes!” she said. “It takes my mind off the rally.”