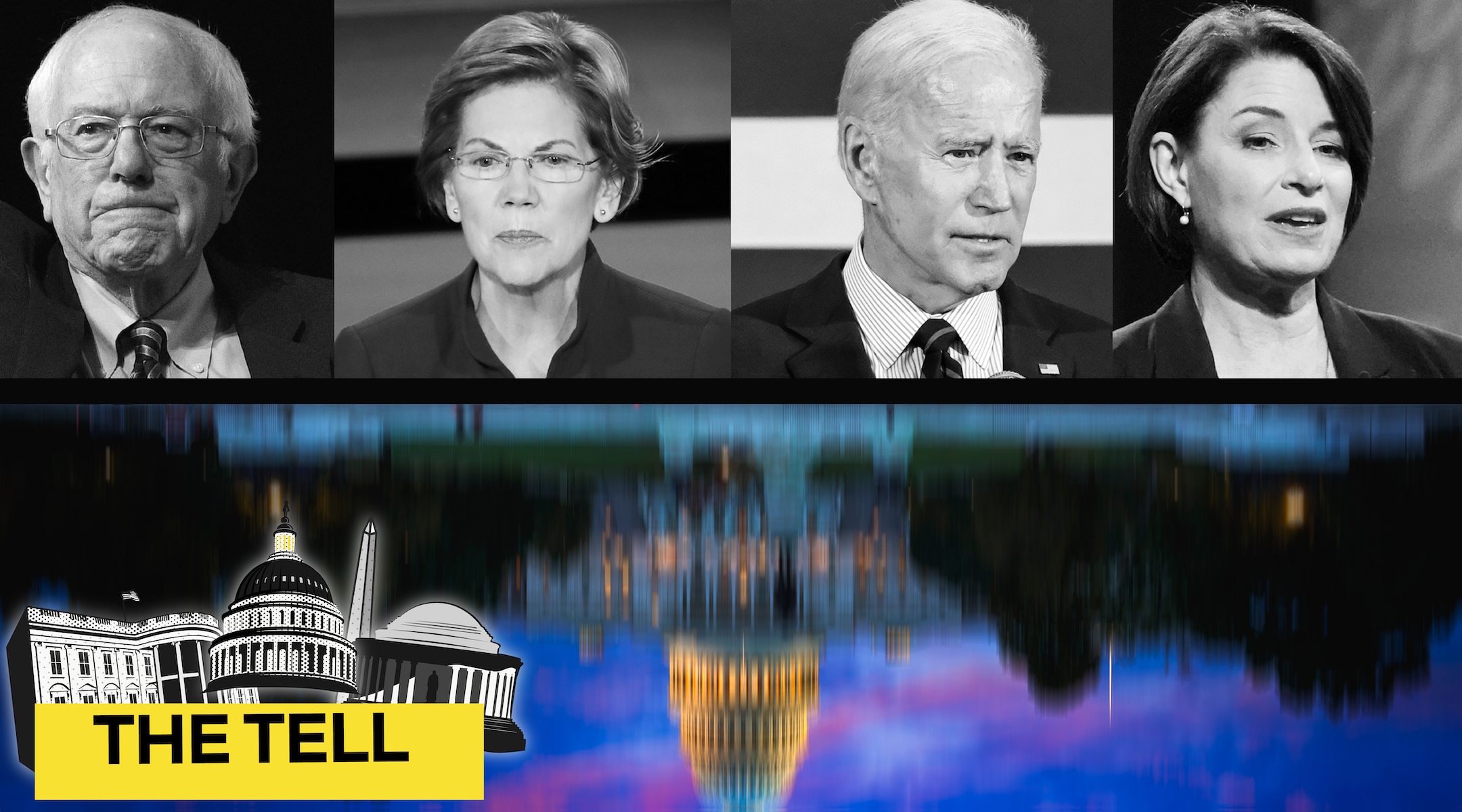 WASHINGTON (JTA) — It’s less than two weeks to the first nominating contest, the Iowa caucus, which means that congressional endorsements of presidential candidates are beginning to trickle in.

A lawmaker backing a candidate this early in the race may reflect a desire to tap into the White House wannabe’s support system or a bid to be considered for a top job in the next administration. If the lawmaker is in a position of leadership or prominence, it’s also a means of shaping the race at a critical juncture. Sometimes it’s simply a function of being from the same state as the candidate.

Nine Jewish lawmakers have made their choices known — that’s not counting the two who are running — Sens. Bernie Sanders of Vermont and Michael Bennet of Colorado, whose mother is Jewish but who does not identify as Jewish.

There are 28 Jewish members of the U.S. House of Representatives, 26 Democrats and two Republicans, and nine Jewish Democrats in the Senate with Bennet included.

More endorsements will come as the crowd of 12 Democrats thins in the wake of early nominating contests in Iowa (Feb. 3) New Hampshire (Feb. 11), Nevada (Feb. 22) and South Carolina (Feb. 29), and then the 16 primaries on March 3, Super Tuesday.

The two Jewish Republicans, Reps. Lee Zeldin of New York and David Kustoff of Tennessee, are like the vast majority of the GOP caucuses solidly in the camp of President Donald Trump, who faces just two long-shot primary contenders.

The seven Jewish Democrats who have endorsed don’t follow such a homogenous pattern:

It’s a grouping that reflects the subtle division that the Massachusetts senator has forged between herself and Sanders, the other candidate who is a flag-bearer for party progressives. Warren has made peace with the party establishment in a way that Sanders has not: Former President Barack Obama has talked Warren up to donors, while Hillary Clinton, the 2016 nominee, has made clear that she still holds a grudge against Sanders for his challenge.

Warren has the endorsement of 13 lawmakers overall, while Sanders has eight.

Schakowsky, Levin and Raskin are each in their way progressive royalty within the establishment. They are also in easy-win districts, meaning their endorsement of Warren is less a matter of mutual back-scratching — they won’t really need her in November — and more a matter of signaling to their followers whom to back at this early stage.

Schakowsky and Levin also are from the Midwest, already perceived as a must-win battleground in November’s contest against Trump, and are useful endorsements ahead of the Iowa caucus. Levin’s endorsement emphasized the economic insecurity that helped drive Trump to the presidency.

Schakowsky, who was first elected in 1998, wields considerable power as the chief deputy whip in the House and has been a mentor to younger progressives. In her Warren endorsement video posted Dec. 12, Schakowsky comes across very much as a party elder, saying that her closeness to the senator dates back to 2008, when Warren first advocated for a Consumer Financial Protection Bureau. Schakowsky also reminds viewers that she was among the first to see potential in “a skinny guy from Chicago,” a reference to Obama.

In 2018, Levin inherited his Detroit-area district from his father, Sander, who had served since 1983. The younger Levin has attracted attention for his ability to work with Rashida Tlaib, the Palestinian-American congresswoman who has rattled the party establishment with her anti-Israel views and confrontations not only with Republicans but her party’s leadership. (Tlaib has endorsed Sanders.)

Raskin also has a progressive pedigree — his father, Marcus, founded an influential progressive think tank, the Institute for Policy Studies. He has shone since his 2016 election as a constitutional scholar on the House Judiciary Committee and has taken a lead in impeaching Trump.

Of the three Warren endorsements, Raskin’s was the only one to emphasize a specifically Jewish issue: combating anti-Semitism.

“All over the world authoritarianism, anti-Semitism, racism and fascism are on the march and the forces of democracy and freedom and equality are under siege everywhere,” Raskin begins. “And our president in his bottomless stupidity and greed finds very good people on both sides in this struggle and repeatedly aligns our country with the despots and dictators, from Putin in Russia and Orban in Hungary and al Sisi in Egypt.” (Viktor Orban, particularly, has come under fire from critics who say he is allowing anti-Semitism to fester in his country.)

Raskin, Schakowsky and Levin also all have been endorsed by the political action committee aligned with J Street, the liberal Jewish Middle East policy group.

The former vice president has garnered the endorsements of Rep. Elaine Luria of Virginia and Sen. Dianne Feinstein of California.

For Luria, the endorsement is at least in part payback — Biden endorsed the freshman in 2018 ahead of a close race in a district that had voted Trump in 2016, and where she has faced some backlash for supporting Trump’s impeachment.

It also sends an early and clear signal to her voters that she remains very much in the center that is the former vice president’s stomping ground. It’s not a coincidence that she announced her endorsement on Jan. 5, the same day as two other freshmen in Pennsylvania districts that Trump won, Conor Lamb and Chrissy Houlahan.

Luria’s endorsement says that Biden is more likely to win “in tough districts like mine,” but also alludes to the foreign policy hawkishness that is popular in her district, which includes the largest Navy base in the world (Luria is a former U.S. Navy commander). She calls Biden “battle tested” and predicts he will “restore our standing on the world stage.”

Feinstein’s Biden endorsement in October set tongues wagging — the prediction had been that she would endorse her old friend, but as a courtesy would wait until Sen. Kamala Harris, the state’s junior senator, had dropped out of the presidential stakes. (Harris quit the race in December.) Feinstein certainly didn’t need to endorse anyone: She was re-elected easily in 2018 and, at 86, is not likely to seek a Cabinet post.

In her endorsement, Feinstein cited her years working with Biden in the Senate — she was first elected in 1992, two decades after his election — and his support for gun control. The issue has defined Feinstein since she became mayor of San Francisco following the assassination of the incumbent.

Another factor might be their shared belief in a robust American foreign policy, a contrast with the retreat of an American presence overseas that Trump has embodied — and which to a degree Sanders and Warren have embraced.

Biden also has the majority of congressional endorsements overall: 36 in the House and five in the Senate.

Like Luria, Rose is a military veteran seeking centrist traction in a district that he first won in 2018, but that Trump won two years earlier. Rose’s district encompasses Staten Island and a patch of Brooklyn. For Rose, though, Bloomberg — who in 2018 gave money to Rose’s Republican opponent — makes more sense than Biden. Bloomberg was a popular, thrice-elected mayor who entered City Hall as a Republican and on some issues is to the right of Biden. Rose has pugnaciously taken on not only Trump but at times his party’s leadership.

“I have no problem with people who are independent thinkers and who choose to support people who are at times across the aisle,” Rose told NY1 last month.

Amy Klobuchar’s campaign on Tuesday announced that freshman Rep. Dean Phillips, also of Minnesota, would join other Minnesotans, including USA curling gold medalist coach Phill Drobnick, in organizing “Hotdish House Parties” — apparently a thing in Minnesota — for the U.S. senator. Phillips’ endorsement appears to be in the “she’s from my state” category.

Much of the coverage of the Senate’s impeachment trial of Trump has focused on the rancor. The Washington Post captures the notorious early Wednesday morning back-and-forth between New York Rep. Jerry Nadler, one of the Democrats managing impeachment, and White House lawyer Pat Cipollone, culminating in an admonishment by Supreme Court Justice John Roberts, who gets to say “pettifogging.”

Here are two moments of comity, or something approaching it. NBC News caught Sen. Lindsey Graham, R-S.C., one of Trump’s most strident defenders, telling Rep. Adam Schiff, D-Calif., that he was doing a “good job” as the lead impeachment manager, a role that Graham held during the 1998 impeachment of President Bill Clinton. (Schiff and Nadler are Jewish.)

And Halie Soifer, the director of the Jewish Democratic Council of America, got a much coveted seat to watch the proceedings live and saw senators paying close attention and taking “copious” notes. Soifer credited “both sides of the aisle” for “understanding the gravity of the moment,” a tonic — from a partisan, no less! — to reporting that Republicans are not taking the proceedings seriously.

The first time giving press credentials to TruNews, an outlet that deals in anti-Semitic conspiracy theories, may have been a White House oversight. A second time — for a major event like the World Economic Forum in Switzerland, and after multiple news outlets (including the Jewish Telegraphic Agency) explicitly pointed out the toxicity of the TruNews content to the White House — and you gotta wonder.

The fire this time … didn’t happen

Did right-wing extremists make good on a promise to show up and disrupt a pro-gun in Richmond, Virginia? A few showed up, but there were no disruptions of consequence. The vast majority of protesters were conventional, and peaceful, Second Amendment enthusiasts. It was not Charlottesville 2.0. The town’s JCC was running a Jewish food festival, which some locals preferred to the Capitol goings-on.

We wrote last week about where the leading Democrats are on Iran policy. A spokesman for former New York Mayor Mike Bloomberg updates us with more detail: Hizzoner didn’t like the Iran deal, but also didn’t like how Trump pulled out of it.

Pete Buttigieg contributes the second piece in our solicitation from leading presidential contenders on how they would combat anti-Semitism and relate to Israel. The first was by Biden.

A fabulist insinuated herself into a group of formerly Orthodox Jews and persuaded her new friends that she had a similar upbringing … and was dying of cancer. Neither claim was true. At Longreads, Dvora Meyers writes about the devastation her former friend left in her wake.

At the risk of getting in the middle of it — I like @BernieSanders.

Tom Steyer, a billionaire, keeps on trying to get the attention of Bernie Sanders, who does not love billionaires, and keeps getting the brush-off. Steyer wants America to get over it.