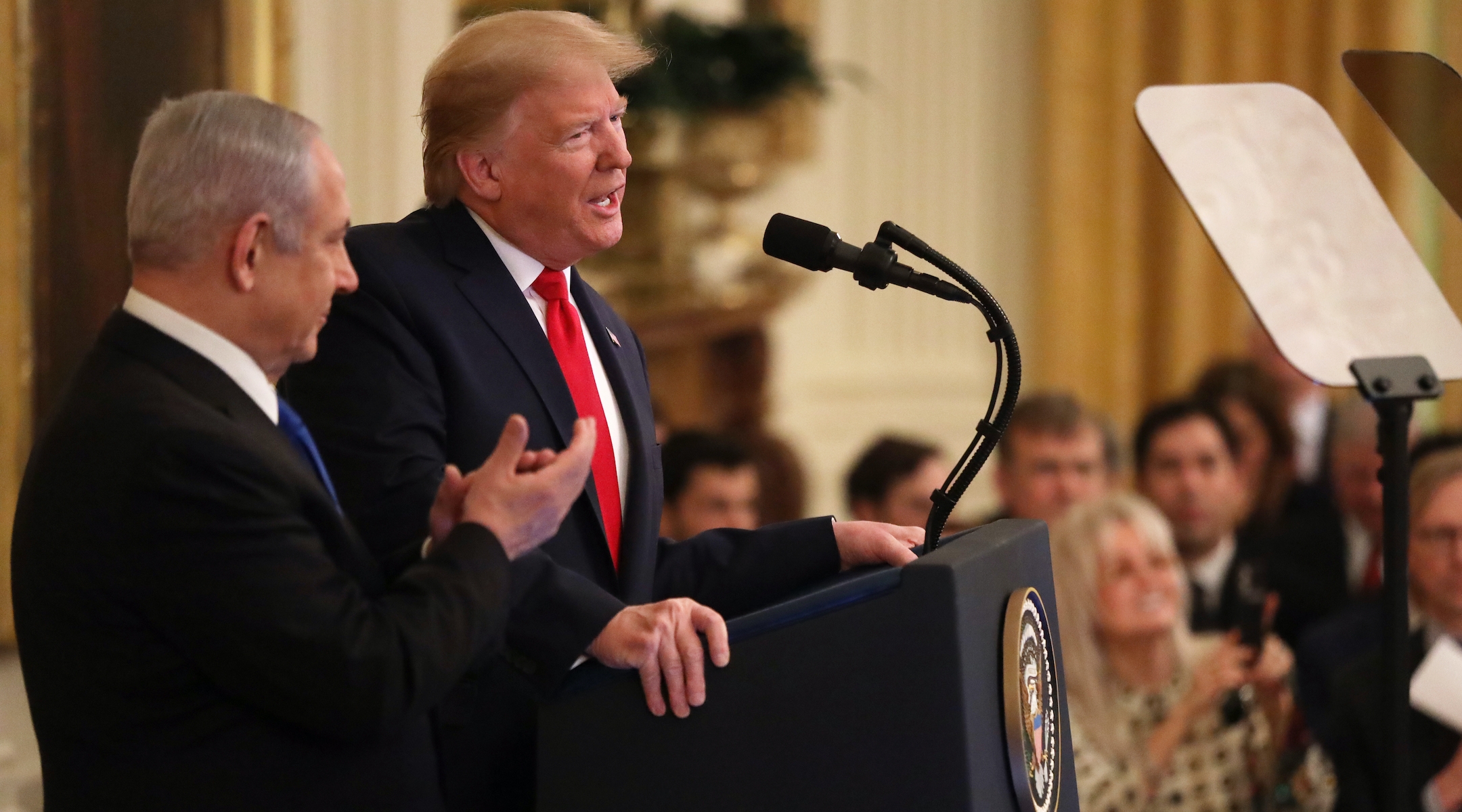 (JTA) — Reactions to President Donald Trump’s Israeli-Palestinian peace plan unveiled Tuesday took a predictable path, with Jewish groups on the right praising the much-anticipated proposal and those on the left criticizing it.

The proposal, which Trump presented at a news conference with Israeli Prime Minister Benjamin Netanyahu, would give Israel the Jordan Valley and parts of the West Bank while freezing for four years the areas that the U.S. proposes as part of a future Palestinian state. A Palestinian state would be made up of Gaza and the majority of the West Bank, which would be connected via high-speed rail, and have East Jerusalem as its capital.

Israel would also get “overriding security responsibility and control over entire territory from the Jordan River to the Mediterranean Sea,” U.S. Ambassador to Israel David Friedman said in a follow-up call with reporters. The White House released a 180-page document that elaborated on the details of the plan.

Here’s what Jewish groups have to say about the proposal (JTA will add add reactions as they come in).

THOSE WHO ARE HOPEFUL ABOUT THE PLAN:

The Republican Jewish Coalition endorsed the plan. Executive Director Matt Brooks said “[t]he President and his team have put together a bold and nuanced proposal that is deeply rooted in America’s core values of liberty, opportunity, and hope for the future.”

The American Israel Public Affairs Committee said it “appreciate[s] the efforts of President Trump and his administration to work in consultation with the leaders of the two major Israeli political parties to set forth ideas to resolve the conflict in a way that recognizes our ally’s critical security needs.” AIPAC urged the “Palestinians to rejoin Israelis at the negotiating table.”

StandWithUs CEO Roz Rothstein said the group “hope[s] this will be a step towards a better future for both peoples” and that “it is ultimately up to Israeli and Palestinian leaders to resolve their conflict through direct negotiations.”

THOSE WHO DISLIKE THE PLAN:

Halie Soifer, the executive director of Jewish Democratic Council of America, said the plan “is a green light for Israeli annexation of the West Bank, an intentional undermining of a viable two-state solution and another example of Trump using Israel to further his domestic political agenda.”

J Street described it as “the logical culmination of repeated bad-faith steps this administration has taken to validate the agenda of the Israeli right, prevent the achievement of a viable, negotiated two-state solution and ensure that Israel’s illegal occupation of Palestinian territory in the West Bank becomes permanent.”

The Israel-based group Peace Now said “[t]he insistence of a small and extreme minority to cling to every piece of land is dragging our country to perpetuate this protracted conflict to the point that it is critically threatening Israel’s character as a Jewish and democratic state.”

Daniel Sokatch, CEO of the New Israel Fund, said the proposal “threatens to make the occupation permanent” and “is not the vision of Israel’s founders.”

IfNotNow co-founder Emily Mayer slammed the plan as “totally and utterly bankrupt,” saying it “reveals the shameful way that our government has catered to the Israeli right — at the cost of Palestinian freedom — for our entire lives.”

Rabbi Alissa Wise, the acting co-executive director of Jewish Voice for Peace, called it “an apartheid plan” and “a distraction ploy by two warmongers who are prioritizing their personal election campaigns over any semblance of statecraft.”

Israel Policy Forum described the plan “as an annexation roadmap” and “an Orwellian exercise in doublespeak in which one side gets to talk about peace and two states while actually carrying out a plan that will ultimately end with a single state between the Jordan River and the Mediterranean Sea.”