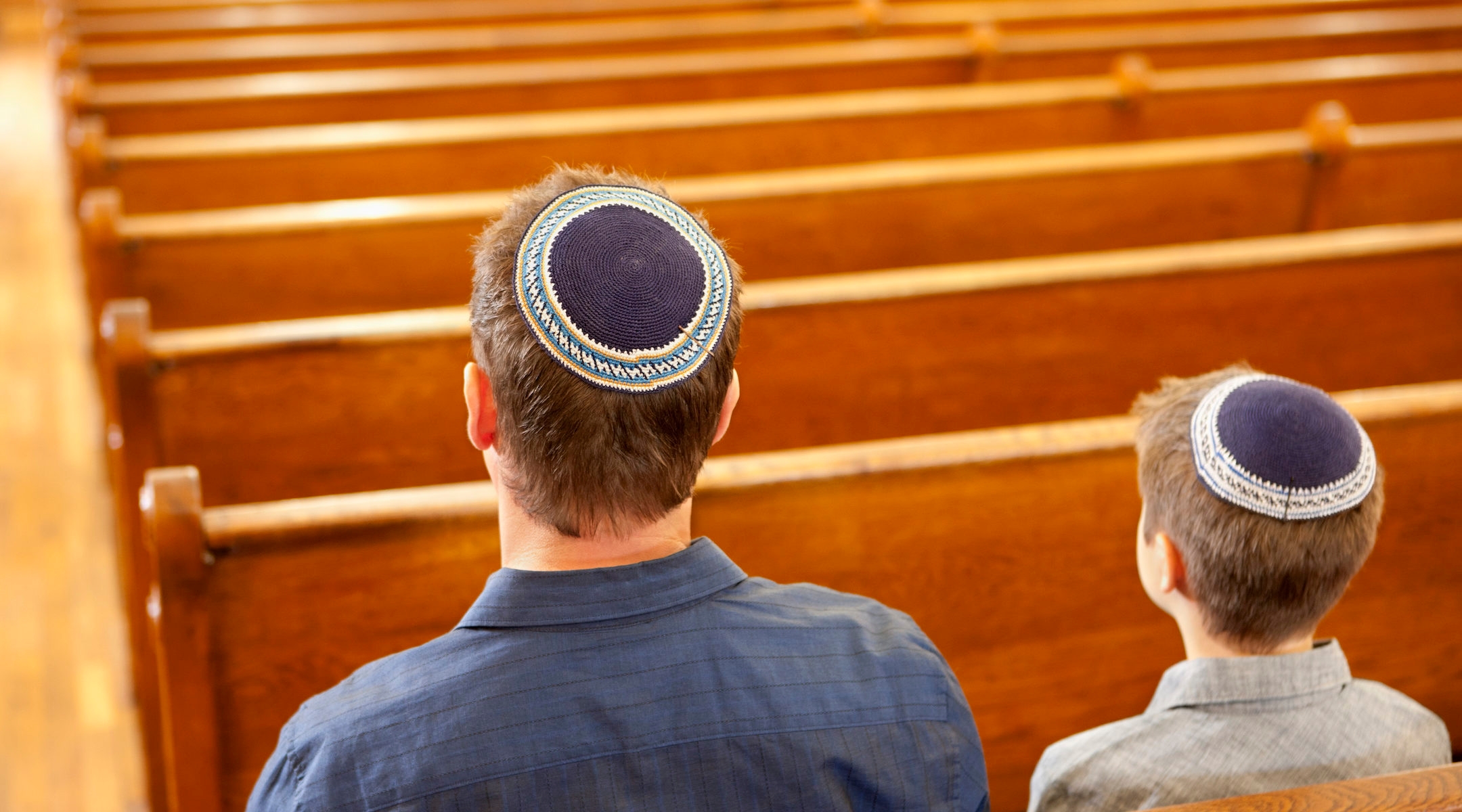 Father and son in a synagogue (iStock via Getty Images)
Advertisement

Among the keynote speakers were the co-chair of the Republican National Committee and the House minority leader, Rep. Kevin McCarthy, R-Calif. The audience cheered while a few members waved signs supporting President Donald Trump.

Multiple polls suggest that the Orthodox Republican majority is slim but growing. But it’s not that simple: A new survey of Orthodox political views found a deep divide between two segments of Orthodox Jewry — and within one of them.

Previous surveys tended to “kind of lump all of Orthodoxy together,” said Mark Trencher, the founder and president of Nishma Research, which conducted the new poll. Trencher, who is Modern Orthodox, said he sensed a divide between his community and his haredi relatives.

Are you a Jew whose political outlook has changed over time? Take our survey to share your story.

“We tried to not look at Orthodoxy as a single homogenous whole,” he said. “We tried to split it first of all between the Modern Orthodox, which of course are very integrated with American society, and then the haredi … who are more insulated.”

After reaching out to three major synagogue and rabbinic organizations last month, Trencher garnered 1,264 responses — a significant sample considering that data about Orthodox voters are typically drawn from larger opinion surveys of the Jewish community and can rely on as few as a dozen Orthodox respondents.

What he found surprised him.

“The political differences within Orthodoxy between the Modern Orthodox and the haredi are huge,” Trencher said. “They are larger than the difference between the bluest blue state and the reddest red state.”

The survey, provided early to the Jewish Telegraphic Agency, found that 66% of haredi voters report having voted for Trump, compared to just 32% of Modern Orthodox voters. As of January, similar percentages approve of the job he is doing.

The survey was conducted Jan. 14-26 — before Trump released his proposal for Middle East peace.

There are reasons to interpret Trencher’s results skeptically.

While financed and conducted independently, Nishma relied on the groups — the Rabbinical Council of America, the National Council of Young Israel and the International Rabbinic Fellowship — to generate survey results rather than engineering a random sample, which is considered the gold standard in opinion polling. And the order of the questions on highly controversial issues, which were not rotated, also could have affected responses by “priming” respondents’ subsequent answers.

Despite these methodological concerns, this is perhaps the most robust survey on Orthodox political opinion in the United States.

“There actually is no mailing list or telephone calling list to conduct an opt-out survey of the Orthodox Jewish community, so it’s difficult to split the group,” Trencher said. “So when people do these surveys and they get several thousand respondents, they end up with a couple of hundred Orthodox, and that gets reported. But then to actually split that Orthodox into smaller groups, you end up with small samples.”

To community insiders, the Modern Orthodox numbers are surprising. Trump has embarked on an agenda that is staunchly supportive of Israel’s government and driven by Modern Orthodox Jews such as his son-in-law, Jared Kushner; his Israel ambassador, David Friedman; and his former Middle East negotiator, Jason Greenblatt.

That agenda includes actions that are thought to command broad support in the Orthodox world — such as moving the U.S. Embassy to Jerusalem and recognizing the Golan Heights as part of Israel.

“There are definitely people in the Modern Orthodox community who are more liberal and some who are more conservative,” Nathan Diament, executive director of the Orthodox Union Advocacy Center in Washington, D.C., told the Jewish Telegraphic Agency. “But if you go to some of the largest Modern Orthodox communities like Teaneck, or Woodmere, or Beverly Hills, if you speak with people, they will say they are quite happy Trump moved the embassy.”

Yet Trencher’s survey found that just 51% of Modern Orthodox Jews agree that they fully support the Trump administration on its “recognition of Jerusalem as Israel’s capital and move of the U.S. Embassy to Jerusalem,” as opposed to 73% of haredi respondents.

Trencher’s findings are largely driven by the 32% of Modern Orthodox respondents who identified as “Liberal Modern Orthodox.” Just 14% of these Jews approve of Trump, and only 31% support the Jerusalem embassy move.

At the other end of the spectrum, 27% of the Modern Orthodox respondents identified as “to the right.” Among these Jews, whose religious norms more closely align with the haredi world, approval of Trump is at 60%, and 75% strongly support the Jerusalem embassy move.

Among the middle 41% — they identified as “Centrist Modern Orthodox” — 45% approve of Trump and 64% support the embassy move.

Trencher also asked haredi respondents to identify whether they identified as “yeshivish” or “hasidic” but found no significant differences in political orientation between those subgroups.

Trencher’s findings may reflect that for many Modern Orthodox Jews today, a wide array of issues are influencing behavior at the ballot box.

“If Modern Orthodoxy really does have more of a modern component to it, what [the survey is] saying about the voting would make perfect sense,” Kwall said. “Your patterns of observance do reflect the extent to which you embrace the outside culture, and that includes the political culture.”

In addition to revealing a split within Orthodoxy, Trencher says that the survey illustrates heterogeneity even within the small percentage of Jews who identify as Modern Orthodox.

“Simple descriptions of Modern Orthodoxy overall just are inadequate given the diversity within,” he wrote in an email to JTA.