Jews fleeing Cuba made Miami their home. Now a synagogue they built is struggling. 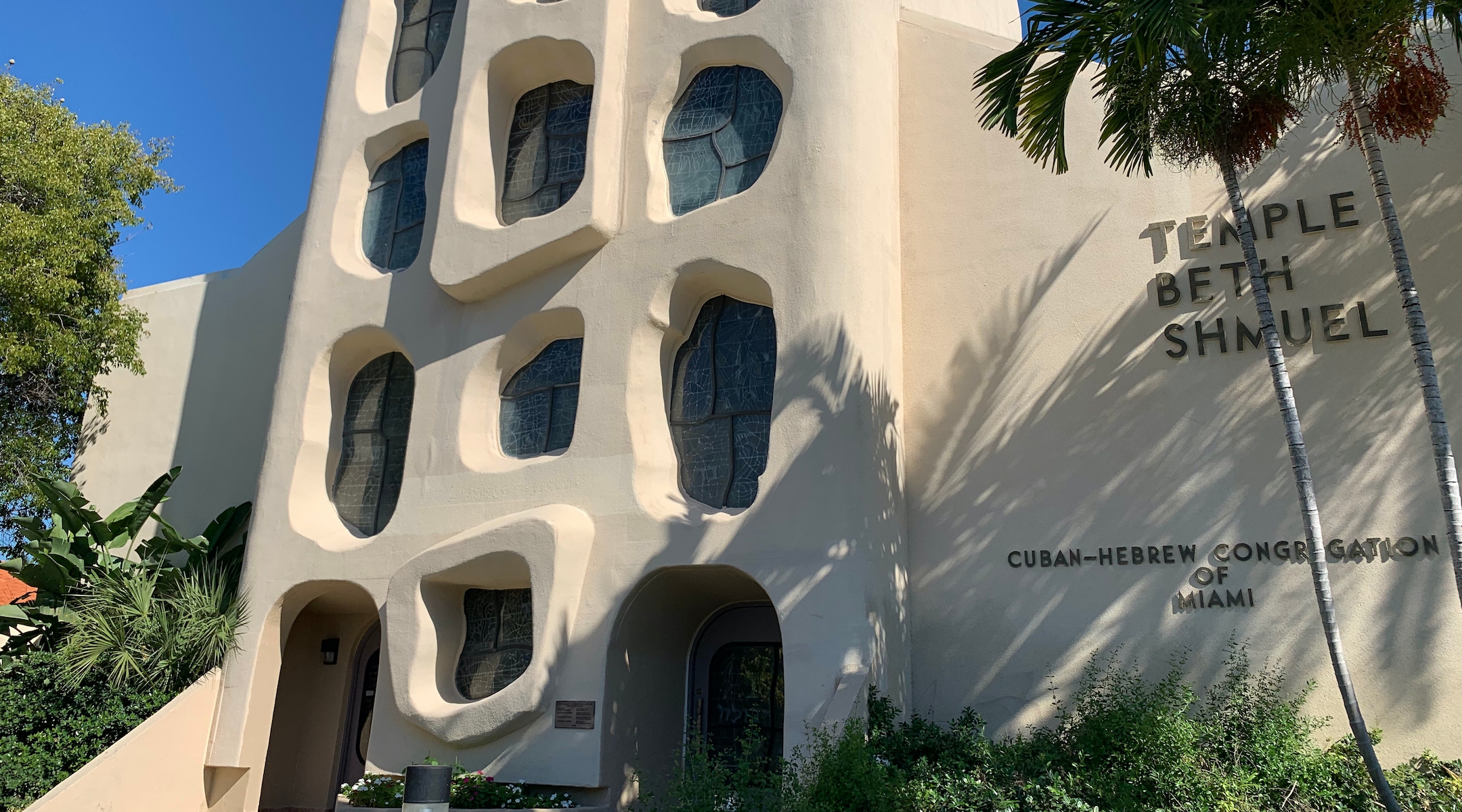 MIAMI BEACH, Fla. (JTA) — Palm trees line the entrance to the Cuban Hebrew Congregation, where on a recent Saturday morning, about a dozen elderly people gathered for services.

Congregants greeted each other in Spanish inside the building, whose Western facade features an impressive Gaudi-esque wall with irregularly shaped stained glass windows. At the front of the sanctuary, the flag of Cuba hung from a pole beside those of Israel and the United States.

Cuban Jews founded this congregation in 1961 as immigration from the island nation surged following Fidel Castro’s rise to power in 1959. Membership peaked in 1980, when more than 1,000 people were affiliated. But the membership has since dropped precipitously to just about 180 today, calling the synagogue’s future into question.

As its membership shrunk, the congregation struggled financially. Seeking alternative income sources, the synagogue offered tours and rental space to outside groups. A museum about Cuban-Jewish history also is under consideration.

“Everything is a challenge,” said Gena Gutman, who became involved with the synagogue shortly after moving from Cuba to Miami in 1965. “We have to manage and we have to survive, and we have to leave this legacy to our children, grandchildren and great-grandchildren, and that’s what moves us to continue.” 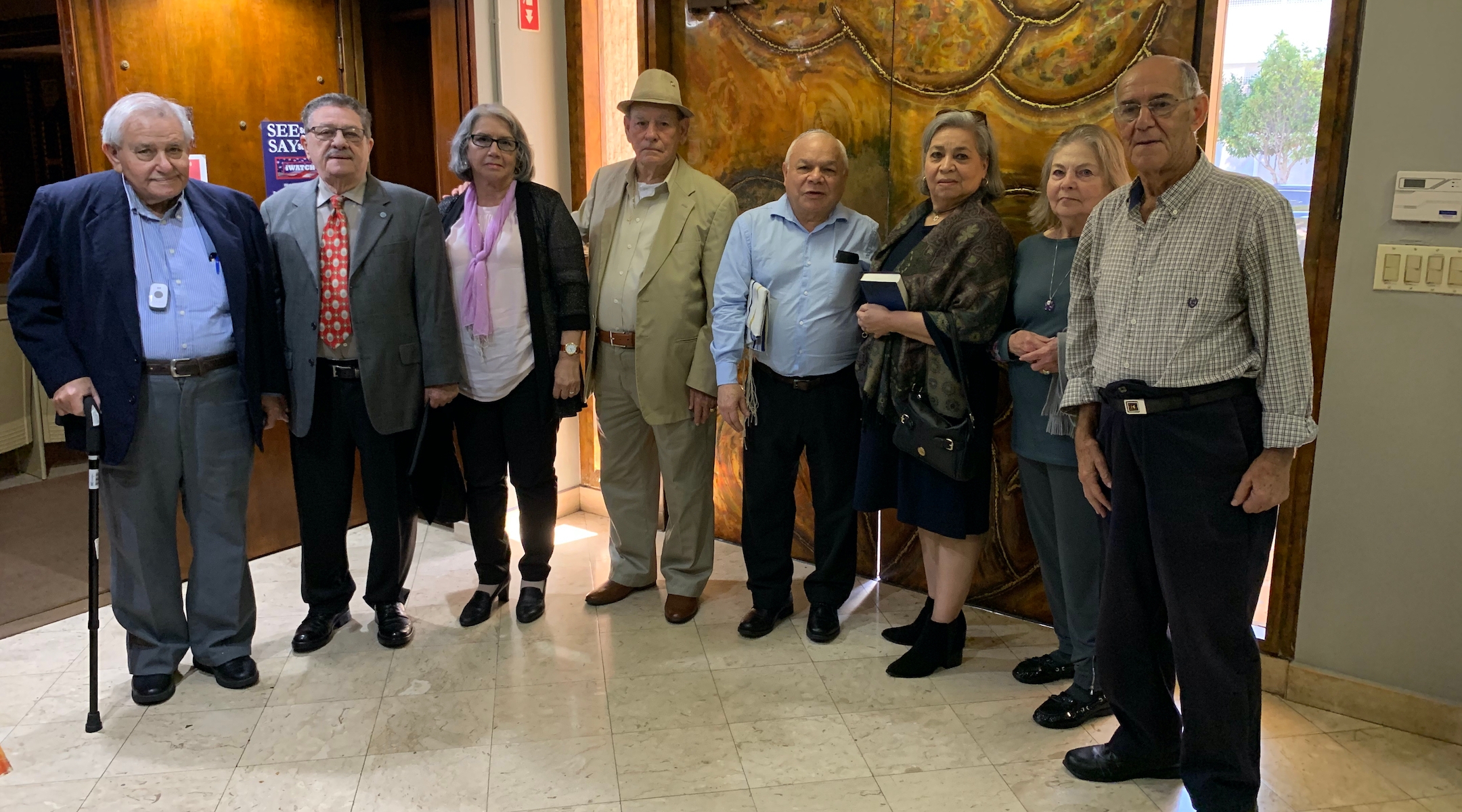 Gena Gutman, second from right, together with other members of Cuban Hebrew Congregation. (Josefin Dolsten)

Cuba was once home to a diverse Jewish community. Sephardi Jews from Turkey and Ashkenazi Jews from Eastern Europe settled there in the early 20th century. More Jews arrived seeking refuge during the Holocaust. Before the 1959 revolution, about 20,000 Jews called the country home.

But the vast majority departed in the early 1960s after Castro declared the country communist. Ruth Behar, a Havana-born anthropologist and author of the memoir “An Island Called Home: Returning to Jewish Cuba,” said they left because Castro’s nationalization program cost many their businesses. Jews also worried about their ability to freely practice their religion under a communist government.

Most of the emigres settled in New York or Miami Beach, which was a far cry from the luxury tourist destination it is today.

“When they arrived, it was still an area that was very affordable and there were lots of rental apartments,” said Behar, an anthropology professor at the University of Michigan.

Gutman, 85, remembers the struggles her family faced when they arrived in Miami in 1965. She and her husband opened a store “the size of a closet,” first selling clothes and later electronics.

“The youngest of my children had to sleep on the floor in schmattas while I was working and my husband was outside trying to get us some merchandise,” she recalled, using a Yiddish word for rags.

Still, things were much better than in her native country, where Gutman struggled to find basic necessities.

“We didn’t had food, we didn’t had medication. When a child gets sick, nothing to do,” she recalled. “It was hard and at that time  — thanks God my husband and me were young, strong — and we decided we had to do whatever is the best for my family.” 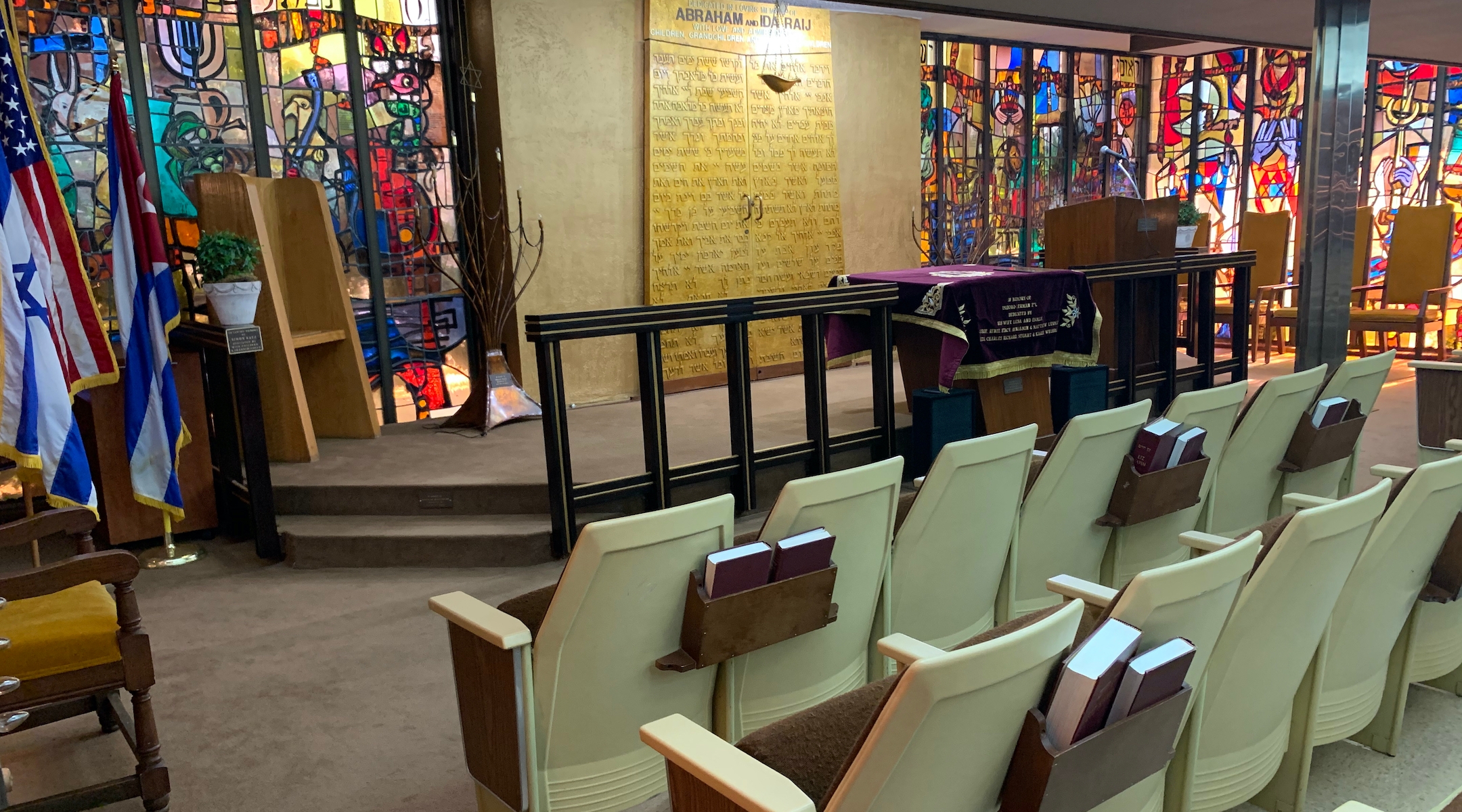 The flags of Cuba, the United States and Israel can be seen inside the Cuban Hebrew Congregation. (Josefin Dolsten)

The Cuban Jewish community had been a tight-knit one, and many who arrived in Miami Beach settled near one another in an effort to re-create the community they had lost. In 1961, they founded Circulo Cubano-Hebreo de Miami, a social group for Cuban Jews. El Circulo, as it was called, eventually became the Cuban Hebrew Congregation.

“It was a place that anchored all of the Jews so that they have a place to go,” said Dubelman, whose family left Cuba in 1961 for New York and later moved to Florida.

The Cuban Hebrew Congregation, which is affiliated with the Conservative movement, was founded by Ashkenazi Jews, which Behar says make up the larger portion of Cuban Jews. Sephardi Cubans founded their own synagogue, today known as Temple Moses Sephardic Congregation of Miami.

The establishment of Cuban synagogues was driven in part by a desire to recapture something of island Jewish life in America. But the new arrivals also weren’t exactly welcomed with open arms by the existing Jewish community.

“They formed the Cuban Hebrew Congregation precisely because they were having a hard time fitting into the Jewish community in Miami,” Behar said.

“There wasn’t really a concept yet of Jewish multiculturalism, so I think the first reaction [from American Jews] was, ‘Are these people really Jews?’ They spoke Spanish, they ate black beans, they had very different customs from American Jews.”

Today, many of the children of the original immigrants have assimilated into the larger American Jewish community. Some have moved away, while others have joined synagogues locally.

“A lot of synagogues [here], even if they’re not completely Cuban Jewish, they have a lot of Cuban Jews integrating” Gutman said. “The ones that moved out belong to other synagogues. It’s a mix of the American Jews and the Cuban Jews, and we mix very well with everybody.”

Despite the economic struggles Gutman, who volunteers in the synagogue office, said she doesn’t spend too much time worrying about its future. Instead, she focuses on making sure she can make it to services as much as possible.