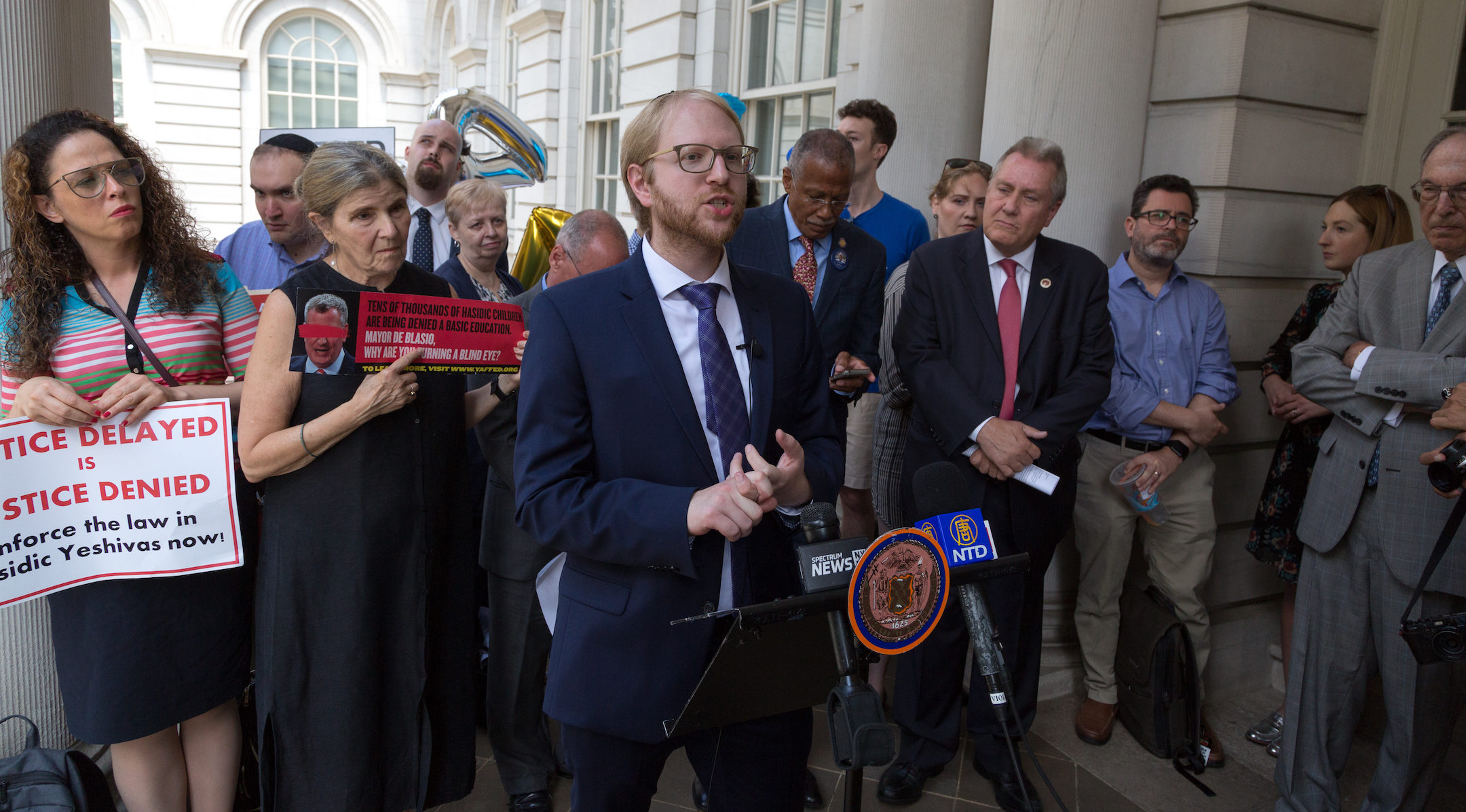 NEW YORK (JTA) — What do murderous anti-Semites and yeshiva education activists have in common?

Nothing at all. But you wouldn’t know that from recent comments by prominent members of the haredi Orthodox community, who have taken to connecting the recent spate of anti-Semitic attacks to those who advocate for improved curricula at Hasidic yeshivas, including myself and others whose entire elementary and high school education took place within such schools.

At the recent Unity Rally in downtown Manhattan, with 25,000 in attendance, Orthodox community activist Chaskel Bennett told the crowd that efforts to improve yeshiva education were “as dangerous to the safety and well-being of my community as ‎the threats we are rallying against here today.”

That same week, New York City Councilman Kalman Yeger asserted in a speech that those who stand with yeshiva graduates pushing for reforms are responsible for an influx of anti-Orthodox hate.

An article in the Daily Wire by an Orthodox writer suggested that we are “intent on destroying” Orthodox communities, and that our efforts are “as much an existential threat as the madmen who storm their grocery stores with guns and rush their homes with machetes.”

Were these comments offered by just an eccentric figure or two, we might write them off as isolated remarks. They would probably strike most readers as utterly absurd, even comical, if they weren’t so vile or about a subject so serious.

However, these are not fringe voices but part of a coordinated vilifying campaign against yeshiva critics by prominent and mainstream voices in the haredi community in a clear attempt to silence us.

It is telling that some of these writers have chosen to refer to me as “Nicholas” (a name I have never used) rather than Naftuli, clearly intending to portray me as an outsider whose message is invalid and irrelevant.

It is Shafran’s piece that is the most troubling. In his op-ed, he claims that I called Orthodox Judaism “crooked” and “absurd,” relying on comments I made about particular stringencies in the Orthodox world and taking them wildly out of context.

Shafran and I certainly disagree on many things.  I disagree with his organization’s official position that one should consult a rabbi before reporting suspected cases of sexual abuse to authorities. I disagree with Agudath Israel’s position that Conservative and Reform Jews will be “relegated to the dustbins of Jewish history.” And I disagree with remarks made at an Agudah event that claimed the Jewish congressmen involved in the impeachment proceedings are responsible for the rise in anti-Semitism in America.

But let us be clear: The real issues are not Shafran’s abhorrent remarks about those with whom he disagrees. The real issue, from which Shafran and his colleagues would like to distract you, is the tens of thousands of Hasidic Jewish children being denied an education, in violation of New York state law, and in violation of Jewish law — the latter of which requires that “a father must teach his son a trade.”

His shameful tactics are employed not only toward yeshiva advocates but also parents of the children for whom we advocate.

Shafran notes the high volume of comments from yeshiva parents opposing stricter oversight of private schools to ensure compliance with the law. What he fails to note is that yeshiva leaders have used misinformation and fear-mongering to compel yeshiva parents to submit comments to New York state’s education department bolstering the yeshiva leaders’ case.

Shafran then attempts to minimize a crucial city Department of Education report that found that of the 28 yeshivas reviewed, only two were fully providing the entire spectrum of mandated secular studies.

He points out that many New York City public school students are failing to achieve proficiency in math and English, too. But what Shafran ignores is that a school with the necessary curriculum — even if students do poorly on exams — is still better than a school that does not teach the core subjects at all.

Shafran also fails to point out that the city’s abysmal findings took 4 1/2 years to produce after Mayor Bill de Blasio stalled the investigation in order to appease haredi constituents. As for the handful of schools that have shown some improvement, the evidence suggests, in fact, that this was largely in response to Yaffed’s advocacy on the issue.

Shafran suggests that my own persistence in bringing the issue to wider awareness proves that I couldn’t have been harmed by my own grossly deficient yeshiva education. That’s like saying Malala Yousafzai’s successful efforts on behalf of girls in Pakistan are proof, ipso facto, that the issues facing them do not exist. For one so keen on touting the superior “critical thinking” skills produced by a yeshiva education, such faulty reasoning is all the more conspicuous.

By vilifying us, such writers hope to silence us — and by silencing us, they hope to maintain the decades-long educational neglect that has gone on in many Hasidic yeshivas, where secular studies barely suffice for students to reach adulthood with basic English literacy.

The claim that our work leads, directly or indirectly, to attacks against Jews is at once dangerous and perverse. To make such an argument in the service of further depriving children of a basic education is a mind-numbing and cynical exploitation of recent tragic events. Jewish leaders and the general public would be wise to recognize this and call out what is plainly an attempt to exploit tragedy.

Naftuli Moster
is the executive director of Yaffed, a nonprofit advocacy group committed to improving secular education in ultra-Orthodox and Hasidic yeshivas.
The views and opinions expressed in this article are those of the author and do not necessarily reflect the views of JTA or its parent company, 70 Faces Media.