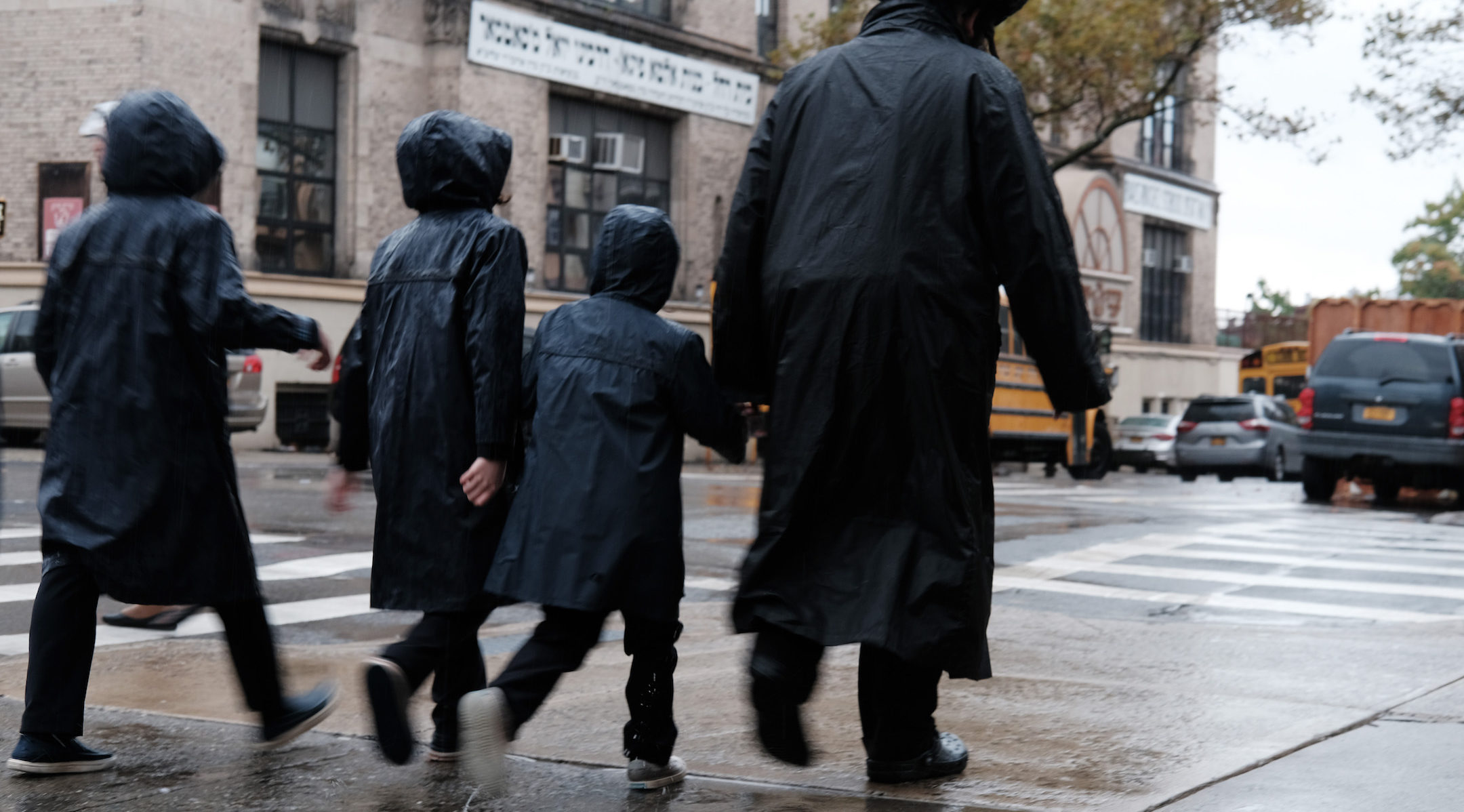 NEW YORK (JTA) — Relentless campaigns calling for curricula reform in the nation’s yeshivas. Misleading headlines about educational standards at Orthodox schools. Zoning efforts aimed at keeping large Jewish families out of suburban towns. Some see a direct link between such things and the anti-Semitic violence that has erupted on the streets of Brooklyn.

But links can be indirect.

Groups that smear yeshivas, and suburbanites who assail observant Jews for daring to want to move into their towns, thicken an expanding cloud of hostility against Jews who wear their Jewishness openly. Denying that subtle but significant link should not be an option.

Since 2012, an activist group called Young Advocates for Fair Education has accused a number of Hasidic yeshivas of neglecting secular studies and thereby handicapping their students, preventing them from becoming productive members of society.

The group’s founder and executive director, Naftuli Moster, would himself seem to belie his claim. He has mounted a tremendously successful, if misleading, public relations campaign against those yeshivas, and convinced a wide assortment of media to parrot and embrace his claims — an impressive accomplishment for a graduate of what he insists is a school that didn’t prepare him for a career.

Moster insists that his only concern in championing state control and radical overhaul of all yeshivas and private schools in New York State is to ensure that Hasidic children will be able to make decent livings. But some observers, who note that he has characterized Orthodox rules governing family purity as “absurd” and “crooked,” feel that Moster may be motivated by the antipathy he harbors for the community in which he was raised.

He also claims that many Hasidic parents are overjoyed by his crusade but are too cowed by nefarious community leaders to register their chagrin.

The truth emerged when New York State released proposed regulations calling for tight state oversight of private schools. YAFFED reportedly managed to amass 2,000 comments of support for the measure. Opponents, though — actual parents and grandparents of yeshiva students who went on record against the regulations — numbered more than 140,000.

Still, the New York City Education Department investigated YAFFED’s charges. It did not locate the thousands of students reputed to be barely able to sign their names in English.

Of the 39 allegedly deadbeat yeshivas YAFFED had pointed to, only 28 were found to in fact be K-12 schools — the others served older students and were thus outside of the department’s purview.

In the letter detailing the findings, New York City Department of Education Chancellor Richard A. Carranza noted that “The DOE recognizes and applauds the significant progress made as a result of the proactive steps many schools have taken.”

Carranza also pointed out that a group called Parents for Educational and Religious Liberty in Schools “has developed and expanded… secular curriculum materials it has made available to yeshivas in mathematics, English Language Arts, and STEM.” He added, too, that “substantially equivalent instruction does not necessarily require that a school meet each and every item in the Education Law” and that “a strong argument has been made that Judaic Studies can be a powerful context in which to cultivate critical thinking and textual analysis skills.”

Then came the inflammatory headlines from national and Jewish outlets alike, which erroneously proclaimed that only two yeshivas provide basic secular education.

Pivot, now, to upstate New York and northern New Jersey, where Orthodox Jewish families from Brooklyn have been migrating since the 1970s, seeking a less urban and more affordable place to live.

A number of towns have enacted zoning changes forbidding new houses of worship.

In several communities in N.J., including Tom’s River and Jersey City, officials have pushed back against an influx of Jewish families by enacted so-called “no knock” ordinances, barring real estate agents representing the Hasidic community from offering to buy homes.

James has called the town’s actions “blatant anti-Semitism.” She warns that “some people find it easy to present Orthodox Jews as the source of all their problems. That’s just wrong.”

Last year, a video produced by the Rockland County Republican Party began with dark clouds rolling in and ominous orchestral music swelling as large text flashes slowly across the screen warning that “a storm is brewing” and “if they win, we lose.”

The “they,” the production makes clear, are the Orthodox Jewish residents of the county’s villages and towns.  After an outcry, the video was removed. But its creation was telling.

The previous year, Councilman Pete Bradley of Clarkstown, a Rockland County town, encouraged local residents to call or text him if they “suspect that non-residents are using our Town Parks.” Orthodox families from neighboring towns had apparently been bringing their children to play in Clarkstown’s parks.

In Jackson Township, New Jersey, Councilman Robert Nixon was accused of orchestrating the creation of several ordinances aimed at curbing the activities of Orthodox Jewish residents, of spying on Jewish residents and of coordinating his efforts with “Jackson Strong,” a group that has demonstrated deeply anti-Orthodox sentiment. After becoming the subject of two federal civil rights lawsuits, Nixon resigned.

In the Ocean County town of Toms River, the town’s mayor once called the growing Orthodox presence “an invasion,” and residents posted unfriendly comments online, including one referring to the Orthodox Jews as “stinkin cockroaches.”

There is no direct line from seeking to undermine yeshivas and seeing Hasidic Jews as targets for physical violence. Stupid thugs don’t know a yeshiva from a yurt.

And there is no direct line, either, between those who don’t want Jews moving into their towns and jerks who take pleasure in knocking off Jews’ hats or punching them.

But people who promote the perception of Orthodox Jews as “the other” add to a nebulous but very real animus against such Jews.