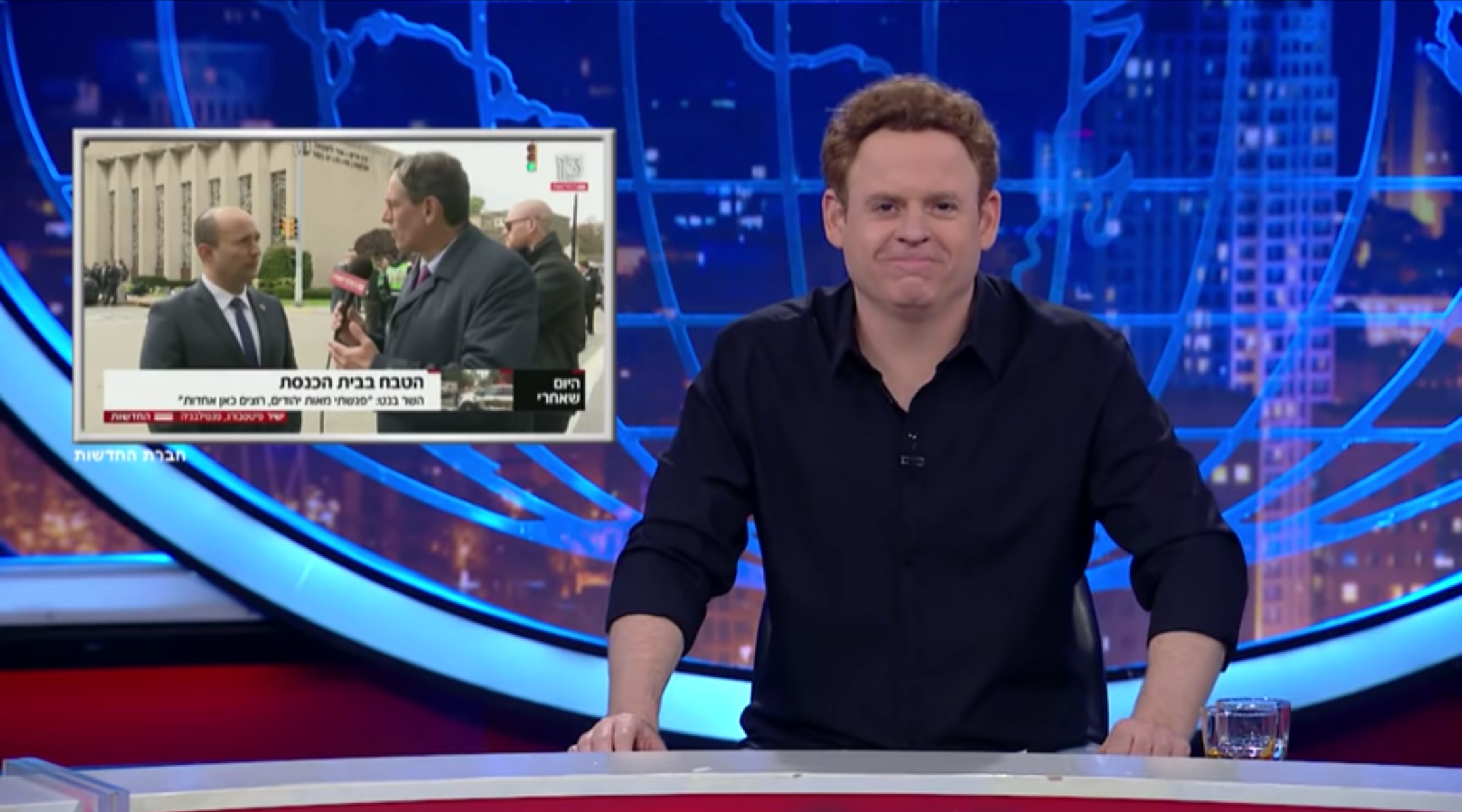 Lior Schleien, shown here in a 2018 segment, is the host of the Israeli satirical show "Gav HaUma." (Screenshot from Facebook)
Advertisement

He acknowledged that there was “nothing funny” about the shooting, in which a gunman killed 11 Jews at prayer at a Conservative synagogue in the most deadly attack ever on an American Jewish institution.

But what was funny to Schleien? Israeli Diaspora Minister Naftali Bennett’s comments outside the synagogue at the time.

“A Jew is a Jew is a Jew and we embrace them all,” Bennett told an Israeli reporter in a video clip that Schleien ran on his show. “Every Jew in the world is welcome and loved.”

Schleien pointed out that Bennett is an ally to many Israeli politicians who have built careers denigrating non-Orthodox Jews.

“Uhhh, no,” Schleien said. “‘Every Jew in the world is welcome and loved’ is a message I saw in a restaurant in a fortune cookie once. But it’s not the message of the current Israeli government.”

He then rattled off a stream of video clips showing Bennett’s allies saying insulting things about non-Orthodox Jews, calling them “fakers of Judaism,” “the toughest problem hurting the Jewish people,” and “not a Jewish religion.”

“Except for the 11 Conservative Jews in Pittsburgh,” Schleien cut in. “They have been promoted to the rank of ‘Jew’ — posthumously.”

For the past decade, Schleien has been the host of the twice-weekly show “Gav HaUma” (literally, the back of the nation), the closest thing Israel has to the American comedy program “The Daily Show.”

Schleien has become a kind of Israeli Jon Stewart — a thorn in the side of Israeli Prime Minister Benjamin Netanyahu and a voice for the country’s secular liberals.

Like Stewart, Schleien has been accused of promoting a liberal agenda. And like Stewart (who left “The Daily Show” in 2015 after 16 years as host), Schleien has responded that his primary goal is creating good comedy — whether at Netanyahu’s expense or anyone else’s.

“I have one job: to give my opinion in the most interesting and funny and intellectual way that I can,” Schleien told the Jewish Telegraphic Agency. “We don’t go into the staff meeting and say, ‘How are we taking Bibi down?’”

Schleien, 41, was raised in the liberal mecca of Tel Aviv. After earning an advanced degree in law, he got his start in comedy in 2002 as a satirist on Yair Lapid’s news program. (Lapid, a former news anchor, is now a prominent member of parliament.) Schleien counts Stewart, Stephen Colbert and David Letterman among his influences.

On his show, Schleien invariably wears a shiny black button down shirt, his red hair either close-cropped or in a mini Jewfro. He is surrounded by four panelists — comedians, pundits, and recently, the award-winning dramatic actor Lior Ashkenazi — who mostly riff on the issues of the day or do a group interview with a public figure.

Each show ends with Schleien doing a monologue that is especially Stewart-esque. One of his favorite moves is to show a politician saying something foolish or hypocritical and then stare deadpan at the camera as the audience laughs. The show has begun posting some of his monologues with English subtitles to reach Israelis in America.

The acrimony is mutual. In 2017, Prime Minister Benjamin Netanyahu accused Schleien and other journalists of trying to “undemocratically overturn the government.” But Schleien says he is almost as frustrated by Netanyahu’s opponents as he is by the prime minister himself. A recent segment mocked Gantz, Netanyahu’s main rival, for confusing the terms “Dominican Republic” and “banana republic.”

Schleien especially enjoys mocking Lapid, his former boss. He loves to show an old photo of Lapid looking more like a sultry model than a government minister, as well as a clip of the avowedly secular politician dancing with Orthodox Jews at the Western Wall.

“They obfuscate and suck up and kneel down to the settlers and the right-wing religious population and the haredi Orthodox population,” he told JTA, referring to Israel’s center-left opposition. “The [opposition] leadership is supposed to oppose those things, and Yair Lapid is the symbol of that weakness and opportunism. He’s a wuss against those forces.”

Schleien regularly savages the left despite being intimately connected to one of its most prominent leaders. Meirav Michaeli, a onetime columnist for the liberal daily Haaretz and former panelist on “Gav HaUma,” is now a senior Labor Party lawmaker — and Schleien’s longtime romantic partner.

Schleien says he and Michaeli have erected a “Great Wall of China” between their personal and professional lives — and noted that their relationship predates her political career. When Michaeli appeared on the show in 2016 after Labor’s election loss, panelists tore into her. She still will appear on the occasional episode of the show.

“I love her, I don’t agree with everything she believes,” Schleien said. “We have other things to talk about besides my show.”

Naturally, many of Schleien’s segments focus on the prime minister. He has made incessant fun of Netanyahu’s demonization of the press, his showmanship, and his alleged corruption. The mocking extends to Netanyahu’s wife, Sara, who is often portrayed as self-absorbed, materialistic and aggressive toward her husband.

“We don’t hate Bibi,” Schlein said during a characteristic bit. “We don’t just criticize him, embitter his life, needle him incessantly, give him no rest. We do all of that out of love. Just like Sara.”

But while Schleien says his top priority is comedy, he is sincerely worried that Israel’s secular, liberal, democratic values are collapsing in the face of a “messianic” religious right-wing. He called President Donald Trump “a good student of Bibi” for his demonization of the press.

“There are no more obstacles,” he said of Netanyahu. “Everything is on the table. He attacks journalists personally, he calls for the boycott of TV channels. It’s getting worse and worse.”