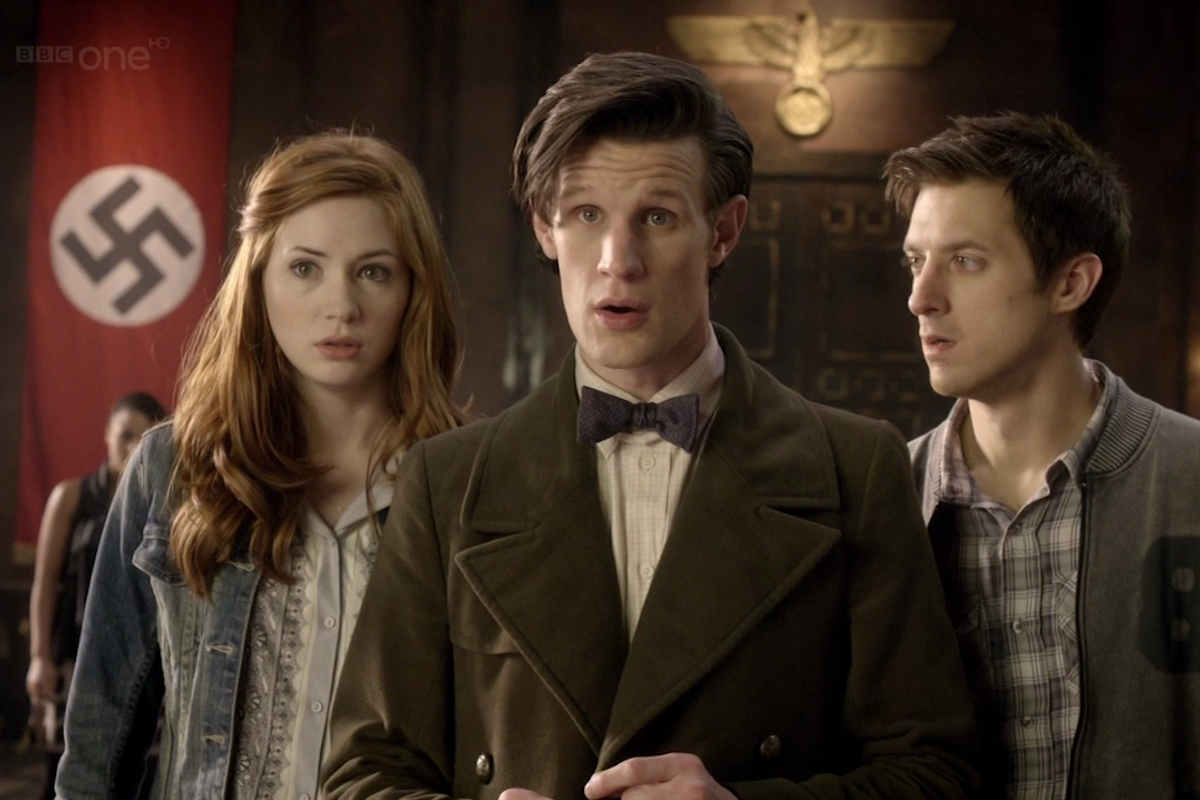 (Screenshot from BBC One)
Advertisement

I’ve been a huge fan of “Doctor Who” for years, so when I saw in the trailer for the new season that the iconic time traveler’s adventures were going to feature a story set in Nazi-occupied Paris, I thought — finally. After 57 years since the first episode aired, and 15 years since the show was revived, it looked like “Doctor Who” was going to try its hand at a Jewish story.

Unfortunately I was wrong. While a good bit of the second episode did take place in occupied Paris, and there were a few tense confrontations with Nazis and Nazi-affiliated characters before the series returned to the modern day, again there were no Jews featured onscreen. This isn’t to say the episode didn’t make some excellent dramatic choices — particularly the decision to cast Aurora Marion as British Muslim war hero Noor Inayat Khan was inspired and poignant, and I would not have wanted to see any version of this story done without her. However, it does sting to see another “Doctor Who” episode set in this time period that fails to include a Jewish perspective.

For nearly 60 years, “Doctor Who”  has made a point of fighting Nazis. One of the show’s most famous recurring characters, the Daleks, a warlike alien species genetically engineered to hate and destroy anything that is not like themselves, were deliberately designed as a Nazi allegory. Designer Terry Nation, who grew up during World War II, based his concepts for the Doctor’s iconic enemy off aspects of Nazism – their distinctive salute, their use of the catchphrase “exterminate” and their wholehearted belief in their own genetic superiority.

The Doctor and their traveling companions have also met and fought a handful of human Nazis over the years. A particularly memorable episode in 2011 features Hitler himself getting punched in the face and locked in a closet, which I’ll admit was a little cathartic to watch.

However, by failing to include Jewish characters in both their allegorical and historical episodes, “Doctor Who” simply continues telling stories about triumph against indiscriminate hate rather than strengthening the heart of any Nazi-fighting episode by seriously exploring what it would look like to face an enemy with such a very discriminate hatred.

In fact, the show has only made specific references to Judaism twice in its entire modern run, and I’ve felt somewhat let down by both. In one far-future episode, “The Satan Pit,” the Doctor is facing down a beast claiming to be the devil and asks which religion it belongs to, mixing real and imagined possibilities: “The Archiphets, Orkology, Christianity, Pash Pash, New Judaism, San Klah, Church of the Tin Vagabond. Which devil are you?”

I don’t know what “New Judaism” would have to say on the subject, but contemporary Judaism doesn’t tend to treat this literal concept of Satan — a giant beast with horns in a fiery pit — as a particularly prominent part of religious practice or belief. Like most things in Judaism, it’s more complicated, with Satan often being understood as a general “opponent” or “adversary,” or simply “the inclination to do evil.”

The other time Jewish culture has come up in the show is that former “Doctor Who” composer Murray Gold’s leitmotifs in the Dalek chants have Hebrew lyrics, which could have been cool and subversive, but in practice landed as an unfortunate choice for the Nazi-coded villains.

I would feel differently about the lack of Jewish inclusion if the show had been generally secular. However, it has never shied away from overt religious content. Until Series 11, every modern character who has traveled with the Doctor — our audience surrogate — has come from an identifiably Christian background. Over the years, many episodes have included Santa, monks, nuns, angels, even the pope and the Vatican.

The way “Doctor Who” has historically centered Christianity also raises some uncomfortable questions. In the episode “Gridlock,” where the survivors of a planet-wide disaster have been unwittingly trapped on an underground highway for years, they all sing “The Old Rugged Cross” together, and when they eventually escape, a second hymn plays. These are beautiful, moving scenes, but are we meant to assume that everyone on this planet is Christian? If so, what happened to everybody else?

In the past two seasons, the show has prioritized a more inclusive view of religion, most notably by featuring Muslim police officer Yasmin (Yaz) Kahn, played by Mandip Gill, in a leading role. This has already opened a new frontier of rich storytelling possibilities that the writers have only begun to take advantage of. For example, “Demons of the Punjab,” an episode from Yaz’s first season, saw her travel back in time to her grandmother’s first wedding — exploring the religious and cultural tensions affecting a Muslim woman, marrying a Hindu man, the day after the 1947 Partition of India.

If “Doctor Who” were to apply this same spirit of inclusivity to Jewish religion and culture, I can imagine the show including characters like an alien Jewish mechanic who saves a crashing spaceship by repurposing the device they use to figure out which way to pray toward Jerusalem, or a minyan facing down the next Dalek invasion of Earth on the steps of their synagogue. Maybe, someday, a Jewish companion could think about their decision to travel with the Doctor specifically in terms of “tikkun olam,” or repairing the world (or, as my rabbi likes to put it, “repairing the space-time continuum”).

Like other companions with marginalized identities, Jewish characters traveling back through Earth’s history would have to navigate questions of whether they want — or are able — to pass as a gentile at that historical moment, balancing the risks of visibility with the joy, defiance and reality of their existence. And there would also be wonderful historical episodes to be had if the Doctor ever met someone like Rube Goldberg or Emma Lazarus.

The “Doctor Who” universe is vast, complicated and ever-expanding. And while I was disappointed to see the show sidestep another excellent opportunity for Jewish inclusion, I am still holding out hope for the future: Maybe next year in the TARDIS?