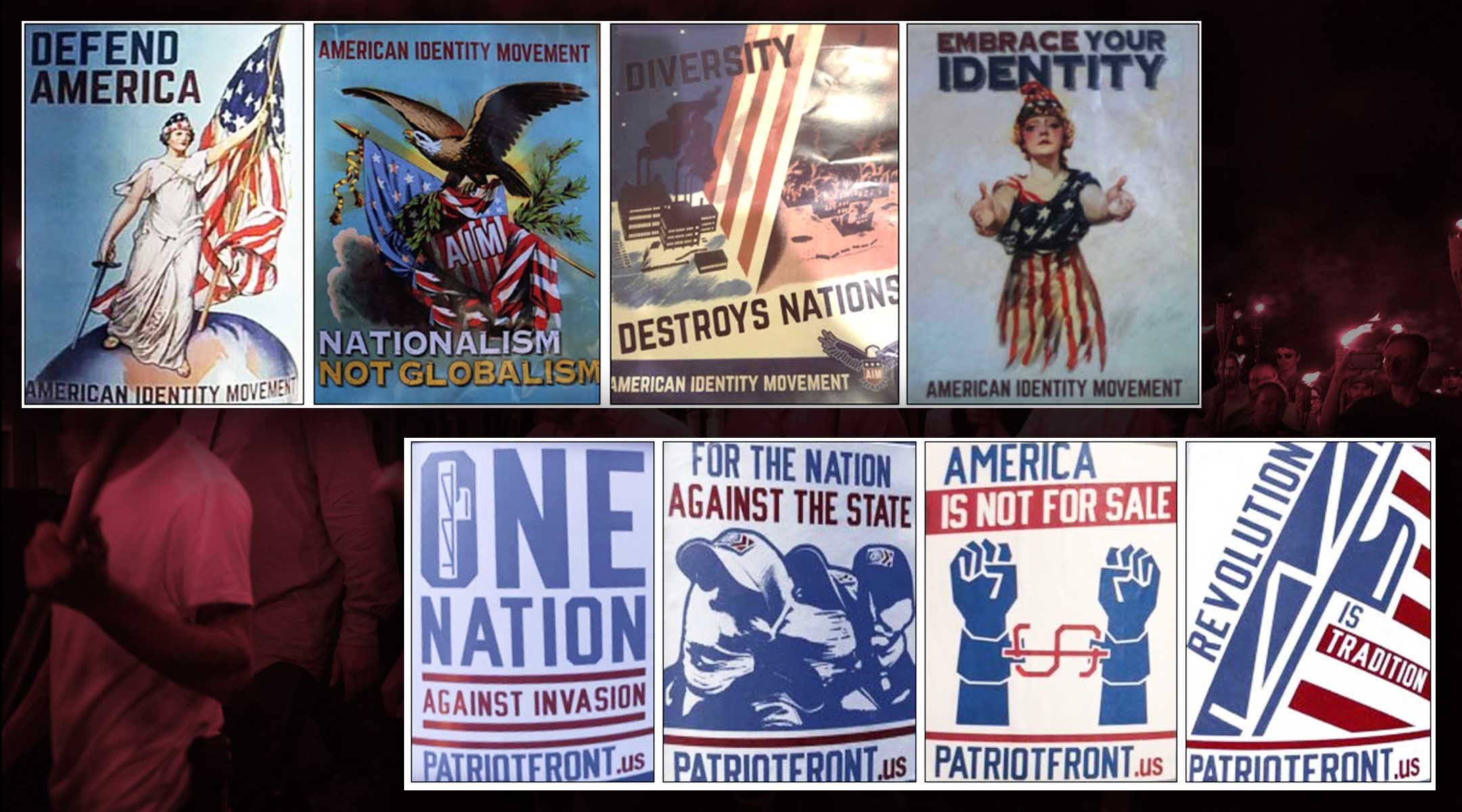 Some examples of flyers from hate groups noted in a report by the Anti-Defamation League on propaganda incidents in 2019. (Courtesy of ADL). The background is of Charlottesville protesters at the Unite the Right rally in August 2017. (Evelyn Hockstein/Getty Images)
Advertisement

Another says “America is not for sale.”

And another: “Diversity destroys nations.”

These are just a few of the 2,713 pieces of propaganda distributed in the United States by white supremacist groups in 2019, according to a  report published Wednesday by the Anti-Defamation League. The flyers, posters and bumper stickers — many using traditional American color schemes and iconography to advance racist, anti-Semitic and anti-LGBTQ ideas — appeared in every state except Hawaii and touched hundreds of college campuses.

The number of incidents recorded in 2019 is more than double the tally from the previous year, in which the ADL documented 1,214 incidences of propaganda, and were concentrated mostly in large states like California, Texas and New York.

“Propaganda is the gateway into broader white supremacist activity,” Oren Segal, the vice president of the ADL’s Center on Extremism, told the Jewish Telegraphic Agency. “It starts with reading a narrative or posting material on a poll, and maybe that leads to joining a march and more. And we have to remember that these are fundamentally narratives that inform violent extremist movements.”

The rise in propaganda, however, comes alongside a 20 percent drop in events held by white supremacists, to 76 from 95, according to the report. Most of the events were not publicized in advance, as groups opted for so-called “flash demonstrations” in which protesters gathered quickly without notice.

Pre-planned events were poorly attended, the report said. Some drew fewer than a dozen participants and attracted larger counter protests. In one instance, a white supremacist activist gave a lecture to an empty room.

But Segal noted that on Saturday, 150 members of a white supremacist group marched, their faces masked, in Washington, D.C.

“One of the things white supremacists are aware of are efforts to expose them, and so they want to be able to amplify their hateful messages without necessarily taking responsibility,” Segal said. “They’re able to have perhaps more impact by putting up a flyer or a banner and maintaining their anonymity while creating fear and anxiety in the community.”

About a quarter of the propaganda incidents were on college campuses, though nearly all of those campuses were targeted only once or twice. The ADL says that shows “white supremacists seem to have failed to gain a sustained foothold on campus.”

During the fall semester of 2019, the number of campus propaganda incidents was particularly high due to a campaign by the Patriot Front, which the ADL describes as a fascist, white supremacist group. The ADL said the group hung banners — featuring block letters in red, white and blue — over overpasses or buildings reading “Deport them all,” “Reclaim America” and “Revolution is tradition.”

The Patriot Front posters have the same style as propaganda from a white supremacist group called the American Identity Movement, which has been spreading its materials for years. Its posters feature traditional American icons like Lady Liberty and the bald eagle with the slogan “Nationalism not globalism.”

Another group, responsible for the distribution of 82 pieces of propaganda, was Daily Stormer Book Clubs, which is affiliated with the white supremacist online publication of the same name. Its propaganda was cruder, with one piece featuring a classic anti-Semitic caricature under the message “Why do Jews push pornography and degeneracy on our children?”

Another flyer from the Daily Stormer Book Clubs displayed a cartoon image of “the squad,” the group of four progressive Democratic congresswomen, under the slogan “Send them back!” A similar slogan was chanted in reference to a member of the group, Rep. Ilhan Omar, at a rally last year with President Donald Trump.

“I think it underscores the need for people to be very careful about their language,” Segal said, regarding the “Send them back” flyer. “You can’t blame elected officials for the way that extremists may exploit their language. To the degree that public officials more broadly may be leveraging more extreme tropes, at some point these things will meet in the center.”