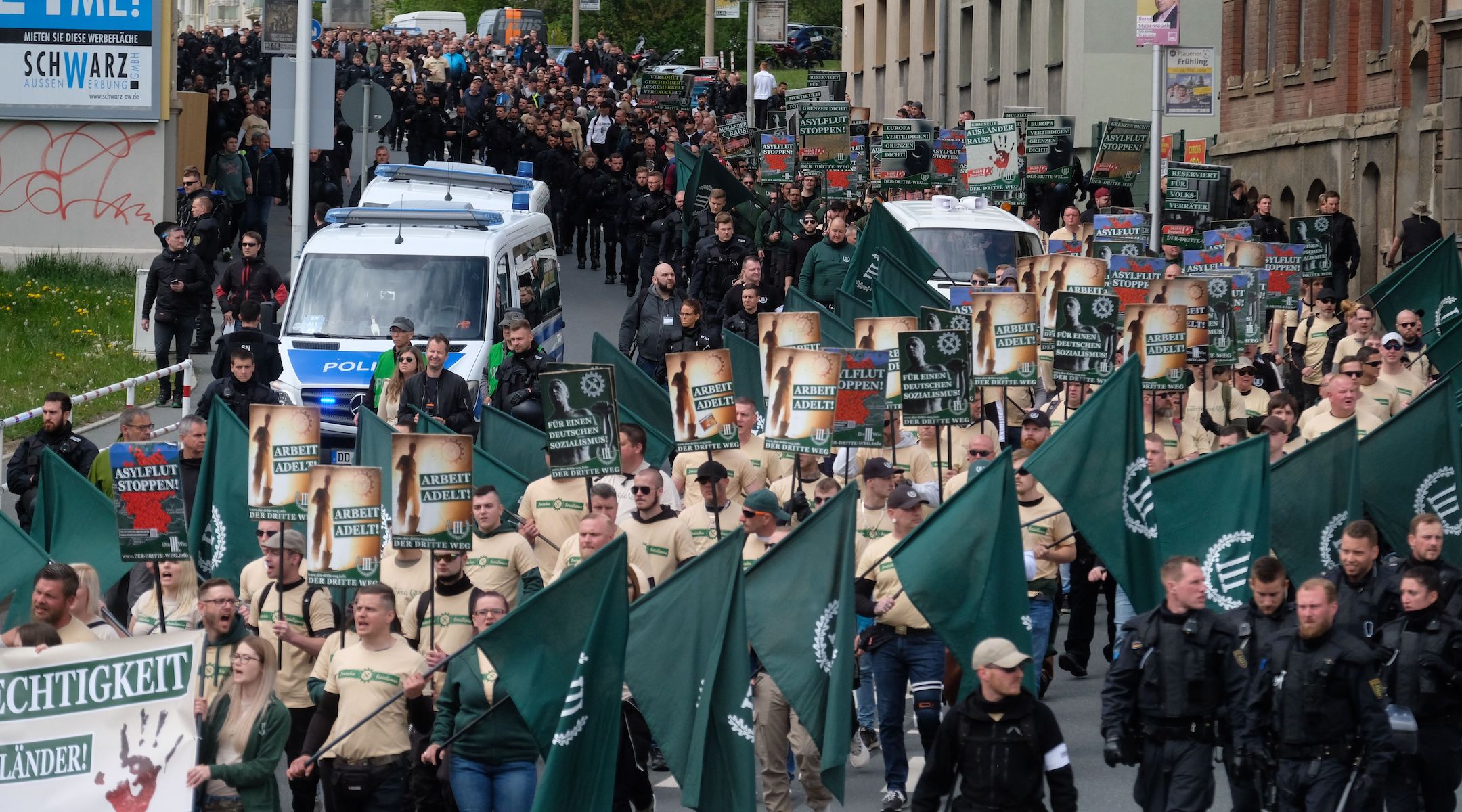 BERLIN (JTA) — Following multiple high-profile attacks by far-right nationalists, German officials are ramping up their efforts against extremists in a move that Jewish leaders in Germany are carefully watching.

Both the Yom Kippur attack on a synagogue in Halle last October and the assassination in June of a pro-refugee politician, Walter Lubcke, were carried out by assailants affiliated with the far right.

Those high-profile events happened against a backdrop of anti-Semitic attacks that officials say have been mostly motivated by far-right ideologies — not by Islamic extremists who have preoccupied most of the government’s recent anti-terrorism efforts.

In 2018, there were five reported physical or verbal attacks daily against Jewish people in Germany, according to the country’s Federal Criminal Police Office — numbers that are widely seen as undercounting the true number of incidents.

Meanwhile, a far-right political party, Alternative for Germany, or AfD, has gained influence in the nation’s governing body. (An official considered likely to succeed Chancellor Angela Merkel resigned earlier this month amid revelations that her party had collaborated with AfD.)

Sigmount Konigsberg, a specialist in combating anti-Semitism for the Jewish Community of Berlin, says Jewish people in Germany are feeling uneasy.

“Ten years ago, no one Jewish would say, ‘I can imagine leaving Germany,’” Konigsberg said. “But today many Jews are prepared. Even if they won’t do it, they are going to be prepared.”

Those promises are welcome to those who have been monitoring the situation, who say the government has done too little for too long — in part because far-right extremists have been looked at as lone actors, not part of organized networks.

“The problem is that for years, the focus was only on Islamic extremists,” said Matthias Quent, an expert on far-right extremism and a director of the Amadeu Antonio Foundation, a group working to eliminate anti-Semitism and other discrimination in Germany. “There’s no other way to say it: The authorities have, for years, trivialized and delayed their reactions to the far right.”

Mourners embrace in front of the entrance to the Halle synagogue in Germany a day after a deadly attack near there, Oct. 10, 2019. (Jens Schlueter/Getty Images)

U.S. authorities have faced the same criticism. It was only last September that the U.S. Department of Homeland Security revealed a new strategy prioritizing efforts against domestic terrorism and far-right extremism after years of focusing almost exclusively on Islamic extremism. This trend continued even amid a reported rise in anti-Semitism and other hate crimes.

Earlier this month, officials raided 13 locations in six German states in a probe into an extreme-right group. A police officer was among the 12 men arrested, and officials said four core members had allegedly planned attacks on politicians, refugees and Muslims with the goal of inducing a civil war-like situation.

In January, police in six German states searched the homes of Combat 18 members, a neo-Nazi group that was banned recently by Interior Minister Horst Seehofer. Officials said the raids were a direct response to the Lubcke murder and the Halle attack. Lubcke’s killer is suspected to have been a part of Combat 18, but the United Kingdom-based group has a much longer history in Germany, where an official chapter has existed since 2012.

Many of these extremist groups have ties to the German military, politicians or police force. The German newspaper Welt Am Sonntag revealed last month that over 500 German Bundeswehr soldiers are being investigated for ties to the far right. Among these cases, the vast majority of the cases, 360, were discovered in 2019.

And last week, Welt reported that over 100 guns have disappeared from various security agency branches over the past decade. Among the lost weapons, 58 went missing from the Bundeswehr. One of the weapons, a submachine gun, was discovered in the home of man who was part of Germany’s elite police unit — and also a far-right chat group under investigation.

The findings suggest that the government has been failing to look “at the broader perspective, at the networks that may exist,” Thomas Haldenwang, president of the Federal Office for the Protection of the Constitution, said at a December news conference detailing a restructuring of security agencies meant to facilitate scrutiny of far-right groups.

At the time, Seehofer said that German agencies were hiring more personnel to tackle what he referred to as a far-right crisis. The Federal Criminal Police Office and the Federal Office for the Protection of the Constitution each aim to add 300 positions to research far-right extremism in a move that Seehofer said would “mirror” the approach already used to tackle radical Islamists.

But those positions could take years before they are operational, said Quent, who added that even once they are funded, getting the new jobs filled could be an additional challenge. Police assist the Halle shooter from a helicopter after its landing at the Federal Supreme Court in Karlsruhe, southern Germany, Oct. 10, 2019. (Uli Deck/dpa/AFP via Getty Images)

Any delay could allow an even greater spread of far-right extremism. Another far-right prepper group, Uniter, has members across Germany and ties to the military, according to recent reports in the British newspaper The Guardian.

Uniter’s founder, Andre Schmitt, himself a former elite Bundeswehr soldier, organized the group as a support network for military, police and other defense personnel, according to reports by the German broadcasting network ARD Monitor.

Raids on houses belonging to Uniter members have turned up military items, and Monitor obtained footage of Uniter holding military exercises in southern Germany in June 2018. Schmitt said the exercises were carried out with airsoft guns, which shoot pellets through a spring-loaded barrel, but an ex-soldier interviewed by Monitor described the drills as “combat training.” This would be illegal for a private group like Uniter to organize in Germany. Schmitt has been fined for possessing military items like practice grenades taken from Bundeswehr reserves.

Two politicians from one of the country’s largest right-wing parties, the Christian Democratic Union, have connections to Uniter. Robert Moritz and Kai Mehliss from Anhalt-Bitterfeld, near Halle, have now publicly cut ties with the group.

Janina Findeisen, one of the reporters who reported the Uniter story for Monitor and The Guardian, is now focusing solely on the far right after a decade of concentrating on Islamic extremism — including a one-year period where she was held captive by jihadists in Syria.

“There is a much bigger problem in Germany, something that up until now was concealed,” she said. “It’s terrifying that the security agencies are a part of this process of concealment. Every country has far-right groups. In America, too. But in Germany, where National Socialism had its start, they supposedly don’t exist.”

Uniter was founded while Findeisen was in captivity in Syria. She sees the group and others like it as more dangerous in some ways than Islamic terrorists.

Findeisen said Uniter “has such a good network and members have military backgrounds.”

“They have access to weapons, ammunition, infrastructure. It just goes so much farther,” she said. “In comparison, the Islamists were badly organized.”