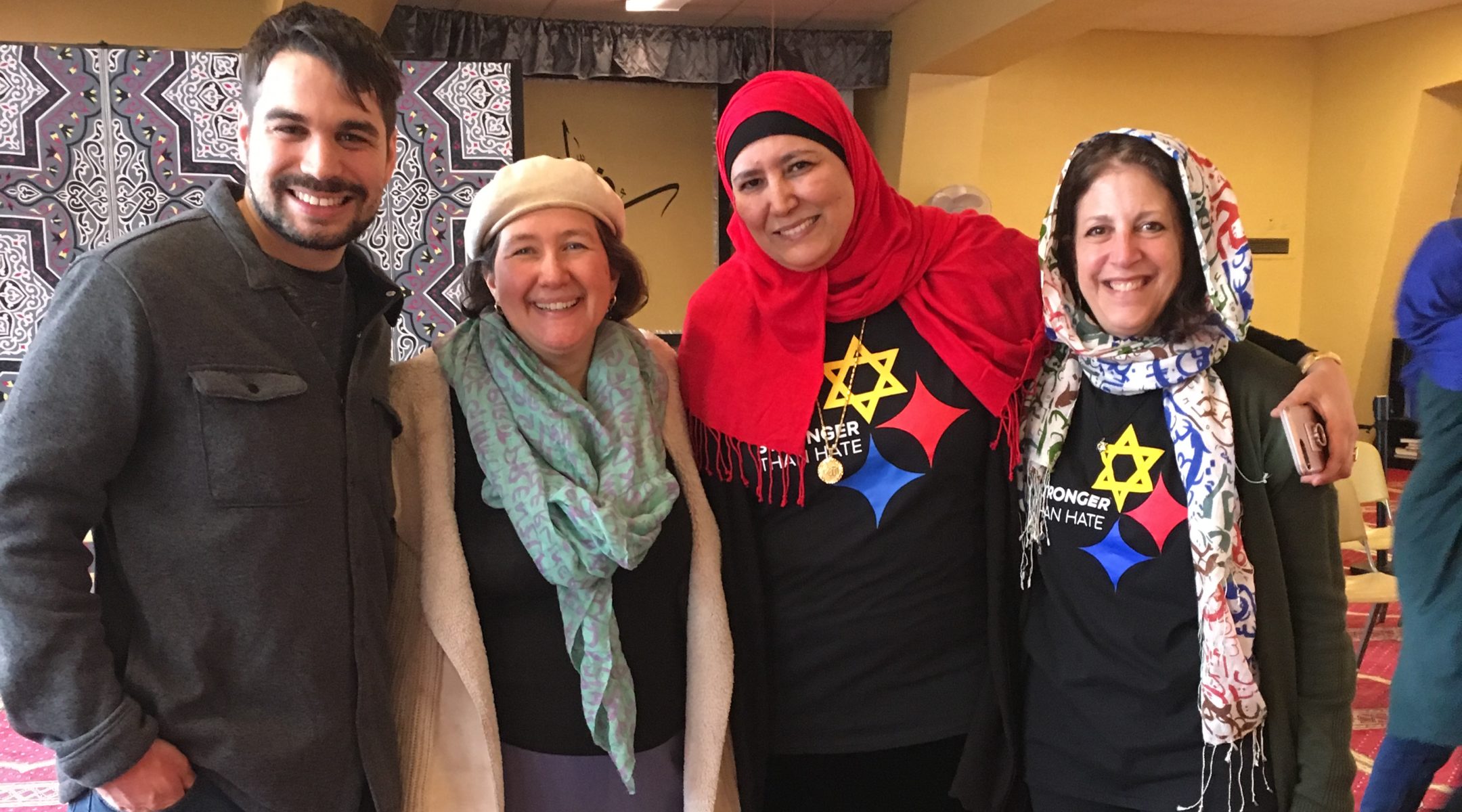 The author’s nephew Joshua Hoffman, Beth Kissileff, a member of the mosque, and Cindy Goodman-Leib at The Islamic Center of Pittsburgh. (Courtesy Beth Kissileff)
Advertisement

PITTSBURGH (JTA) — “The Quran tells us red and yellow are the most distracting colors, the ones that should not ever be used for a prayer rug,” the imam tells us, looking down at the red and yellow rug beneath our feet in the mosque. He adds, “It was a donation, there was nothing I could do about the improper coloring.”

“Why don’t people know what the Quran has to say about these things?” my teenage daughter asks.

My daughter and I exchange glances; his words and complaints seem so familiar. Our husband and father is a rabbi who also wishes that his congregants had more knowledge about their own religion.

So many things about the mosque’s Friday afternoon jumah services feel familiar to us: No one pays attention to the announcements about blood drives and registration for Sunday classes because they want to get to the kiddush — or in their case, the afternoon meal; little kids are running around when everyone else is solemn; so many different kinds of people are packed together in the worship space.

The first time I came to this mosque, in the Oakland neighborhood of my hometown of Pittsburgh, was Nov. 4, 2018, less than 10 days after the attack at our synagogue, New Light, which rented space at Tree of Life. We were there at the invitation of the mosque. Four men who had survived the January 2017 attack on their mosque in Quebec had asked the Pittsburgh mosque to arrange a time to sit with members of all three of the synagogues housed at Tree of Life in order to comfort us, to advise us on how to put security arrangements in place in our worship space and tell us what their community had done to foster healing after Islamophobic attacks. The men from Quebec drove 12 hours each way at their own initiative, just to be with us.

To be able to cry with someone who had an experience similar to mine, and who shared concerns I shared, was invaluable. One of the Canadian visitors told me how his son was afraid to go to the mosque and that he and other children underwent therapy to help them cope with their trauma. I told him that the first thing my daughter had said after the attack was that she hoped people would not be afraid to go to synagogue.

Knowing that others with similar experiences and concerns were strong enough and generous enough to provide comfort was a kindness we never would have expected and it was immeasurably powerful to our traumatized souls.

Before that day, I had never been inside a mosque, nor had I thought it was a place I should go or would feel comfortable.

But since then, I returned after the March 2019 New Zealand mosque attacks to greet members of the mosque as they picked up their children from Sunday classes with other members of my Pittsburgh Jewish community. A mosque member who is a psychiatrist spoke gently and clearly to the assembled children, and us, to reassure us that though there are bad people in the world, the good ones outnumber them. I was grateful for her words, which I felt resonated for me personally, as much as for the Jewish and Muslim children there.

Members of the mosque came to the Purim meal at our synagogue shortly after the New Zealand shootings and helped us drown out the name of Haman as the story of Esther was read. They were unable to participate in the mitzvah of drinking until one is unable to distinguish between “blessed is Mordechai” and “cursed is Haman,” as alcohol is not on the menu for a religious Muslim. Although some of them said they did not fully observe this prohibition, I refused to serve them my homemade etrog vodka.

The former director of the mosque, Wasi Mohammed, came to a meal for Iftar breaking the Ramadan fast at my daughter’s school in May and explained some of the ideas behind Ramadan. In August, he spoke to a group from her religious Zionist summer camp about lessons he had learned after the shooting.

Mohammed also spoke at the one-year commemoration of the synagogue shooting, and my daughter shared that her counselors and group leaders quoted his words about hope frequently during the summer.

Here in Pittsburgh, we Jews and Muslims realize the need for cooperation and mutual aid and respect even though this is not the case in other parts of the world.  Still, to be able to share humanity and vulnerability with others is one of the ways to be most fully human. As the Mishneh in Sanhedrin 4:5 teaches: “A human being mints many coins from the same mold, and they are all identical. But the holy one, blessed by God, strikes us all from the mold of the first human and each one of us is unique.”

To heal from the cruel loss of 11 Jewish lives, I choose to value and respect all humans of all religions. Many reached out to us when we needed help, and I hope to have the privilege to continue to relate and learn from them. By fostering ties and mutual respect with others of different faiths, I can testify — as a Jew — to the presence of holiness in the world, imperfect and shattered as it is.