Fred Guttenberg, whose daughter was killed in Parkland, has emerged as one of America’s most vocal gun reform activists 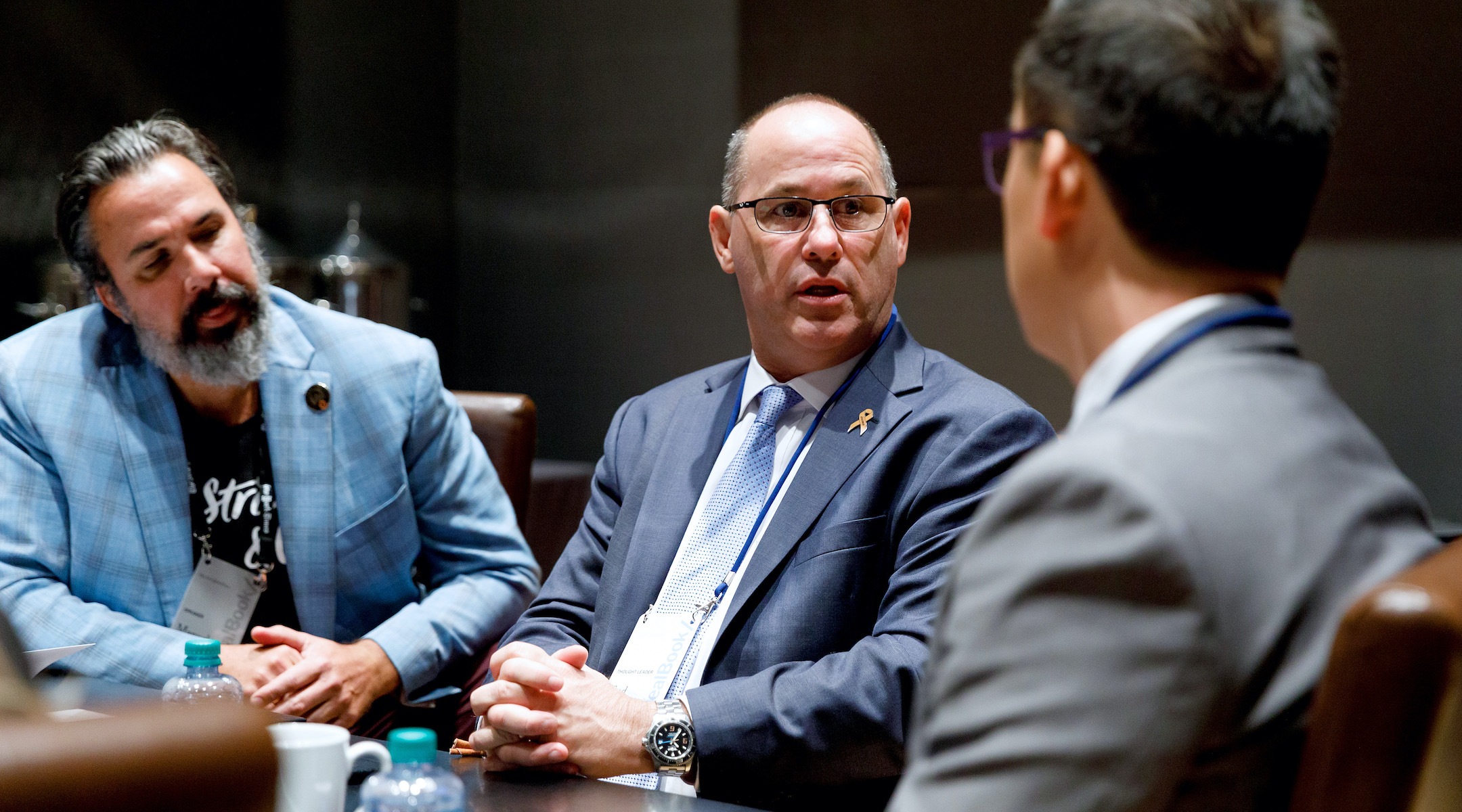 Jaime, a bright-eyed 14-year-old who loved dance and wanted to be a pediatric physical therapist, was one of the 17 people killed in the mass shooting at the Marjory Douglas Stoneman High School in Parkland, Florida, on Feb. 14, 2018.

“Normally people look at life milestones with children, and they smile and they laugh and they get excited,” Guttenberg said in a phone interview with the Jewish Telegraphic Agency hours after visiting his daughter’s grave on the second anniversary of Jaime’s burial. “And I am recognizing my daughter’s life milestone today, her burial, by having gone to her cemetery this morning.”

Most patents look at life milestones with children and smile. As the parent of a wonderful 14 year old daughter who became a victim of gun violence, milestones are different. Today's milestone is two years since I buried my daughter. I will be going to the cemetery today. pic.twitter.com/cIibvuYhVp

Less than two weeks earlier, Guttenberg had been ejected from President Donald Trump’s State of the Union address after yelling out in protest as Trump spoke about gun rights. The moment offered a stark reminder of how dramatically his life had changed.

Before the shooting, Guttenberg had sold a company that owned 19 Dunkin’ Donuts franchises and was dabbling in a number of fields, including real estate and auto brokerage. He also was caring for his brother, who was suffering from cancer.

Everything changed after Jaime was murdered in one of America’s deadliest school shootings. Guttenberg set aside his business plans. He also stopped attending synagogue, finding it impossible to understand how his daughter’s death could have been part of God’s plan.

And he emerged as one of the nation’s most vocal gun reform activists in a country where guns cost nearly 40,000 people their lives the year before the Parkland shooting.

He spends all his time on the cause, traveling to meet with elected officials across the country, doing media interviews and writing to his more than 250,000 followers on Twitter. His wife, Jennifer, and son, Jesse, also have spoken out on the issue.

Guttenberg says he tries to remain calm while speaking about his daughter and his anger about the lack of national policies to stem gun violence.

But sometimes, like when he listened to Trump declare an intention to protect gun rights at the State of the Union, his anger can’t help but spill through. He later apologized and said he “should not have yelled out.”

“I don’t ever want to do things that detract from what my purpose is, which is to lower the gun violence death rate,” he told JTA when asked about the incident. 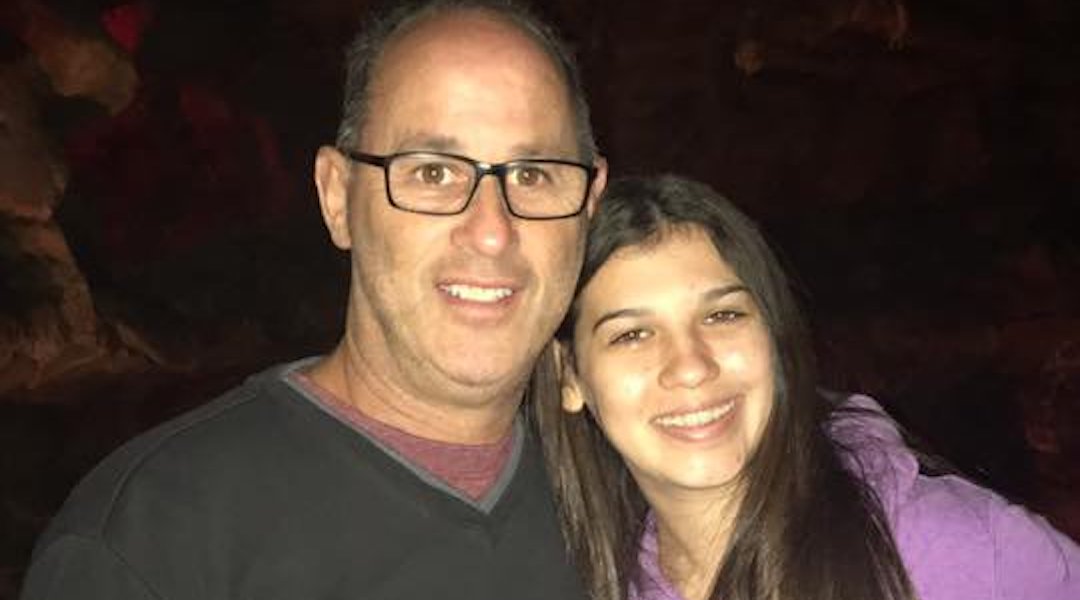 Guttenberg with his daughter Jaime, who was killed in the Parkland school shooting. (Courtesy of Guttenberg)

As the general election looms in November, Guttenberg says he has a singular focus: putting in office a president and lawmakers who will flout the country’s powerful gun lobby and instead enact laws that keep Americans safe from gun violence.

“The way I see it, this is the most crucial year in this country’s history,” he said. “This is the year that can determine whether or not this country will ever be able to pass real gun safety legislation.”

Guttenberg says local gun reform measures give him hope, but he blames the country’s most influential senator, Senate Majority Leader Mitch McConnell, for a lack of broader change. McConnell, a Kentucky Republican, has said he would not allow any gun-related legislation to be put up for a vote unless Trump says he would sign it into law.

“It’s the job of the House and the the Senate to pass legislation to the president and to force the president to either sign it or not, and Mitch McConnell has refused to do his job, so we need to fire him,” Guttenberg said. “And I am confident and optimistic that we’re going to, and I am confident and optimistic that after the next election, we will see gun safety legislation pass on a national level.”

Though Guttenberg has yet to endorse any presidential candidate, he has praised several Democratic contenders on Twitter and appeared in campaign ads for Joe Biden, the former vice president who, like Guttenberg, has experienced searing losses.

Biden lost his first wife, Neilia, and infant daughter Naomi in a 1972 car crash and his son, Beau, died of brain cancer in 2015. He called Guttenberg after the shooting, and the two later met and talked about how to cope with grief.

“I’ve talked openly and publicly about how, to be quite honest, some of the things he said to me have been the most important parts of my path forward in terms of healing and mission and purpose, so I’ve been very thankful to him,” Guttenberg said.

One Democrat he isn’t a fan of is Bernie Sanders, the Jewish senator who is considered the front-runner for the party’s presidential nomination. Guttenberg has criticized the Vermont senator’s track record on guns, and in turn has been harassed by Sanders supporters.

Sanders has drawn criticism for not doing more to disavow backers who have gone after progressives who do not support him. Guttenberg says he has reached out to Sanders’ campaign but has not been satisfied with the response.

.@BernieSanders, you have campaign surrogates who know how to reach me. For the good of this country, and in order to ensure the current occupant of the White House is defeated, I would like to speak with you. Done engaging with online surrogates of yours. Call me.

Guttenberg has also struggled with his faith. Raised in a Conservative Jewish family, Guttenberg and his family used to belong to Temple Beth Chai, a liberal independent synagogue in Parkland, a heavily Jewish suburb about an hour north of Miami.

But Jaime’s death, which came just months after Guttenberg’s brother passed away, made him question God. Though he’s still on good terms with his rabbi, Guttenberg decided to leave the synagogue.

“I’ve not yet come to peace with my struggles with religion,” he said. “What I will say is my faith is stronger than ever, but it’s placed elsewhere. It’s placed in the people around me. I’m so amazed by how amazing people have been that my faith in humanity is strong.”

Guttenberg says his optimism and activism shouldn’t be mistaken for healing.