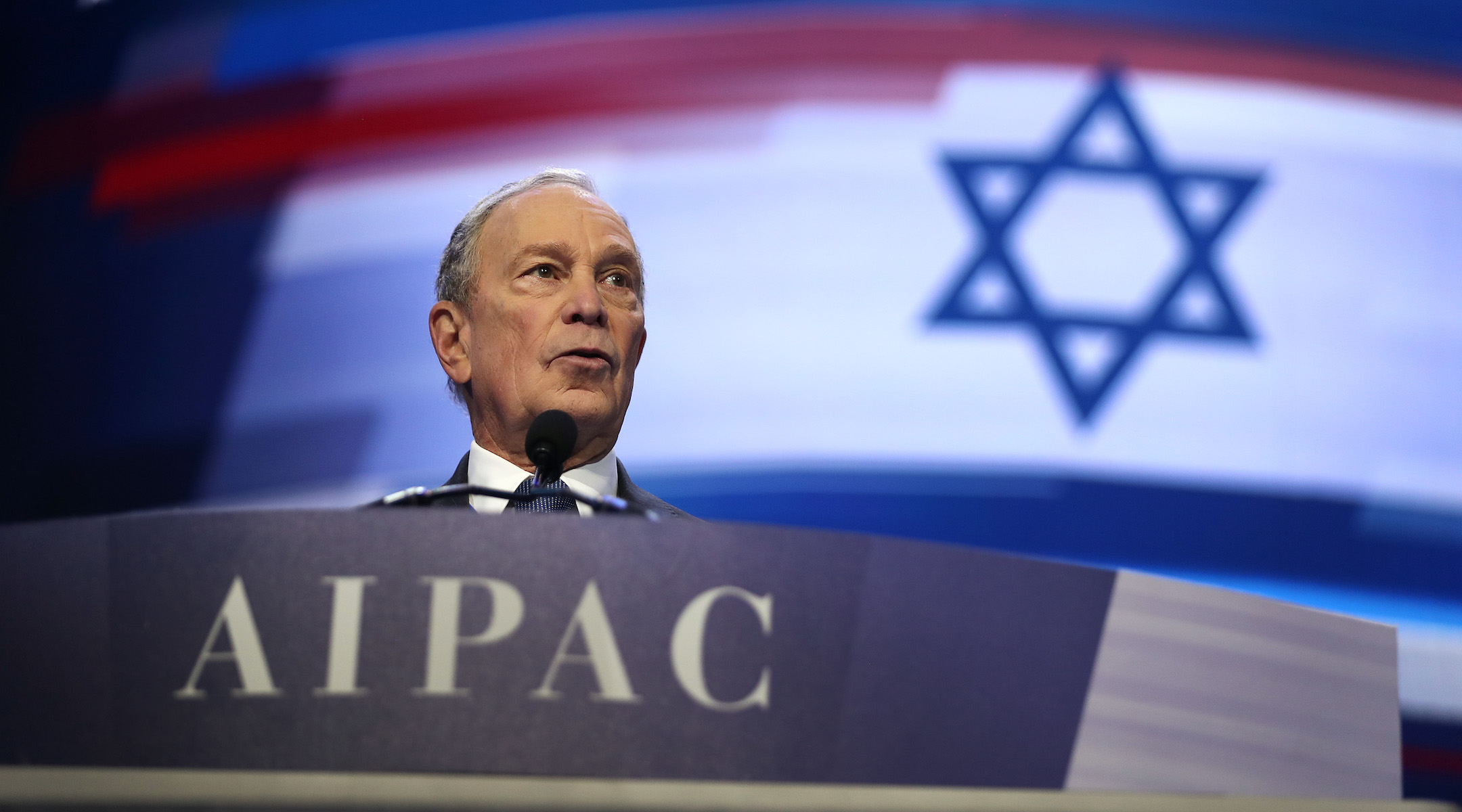 WASHINGTON (JTA) — Joe Biden made an appearance via video and Mike Bloomberg turned up in person. So did Mike Pence. Even the coronavirus got a shoutout.

Despite threats of a boycott by Democrats and anxieties about communicable diseases, this year’s annual policy conference of the American Israel Public Affairs Committee was a busy, bustling and bipartisan affair.

Still, the names that loomed largest were the ones that did not make an appearance: Bernie Sanders and Donald Trump.

Sanders, the Vermont senator who is currently the front-runner for the Democratic presidential nomination, announced last week that he would boycott the AIPAC conference, saying the organizations provides a platform for “leaders who express bigotry and oppose basic Palestinian rights.”

Trump has snubbed AIPAC since 2016, when its leadership rebuked the then-presidential candidate because he had directly attacked President Barack Obama in his speech. Attacking a sitting president is a major no-no for a lobby that makes bipartisanship and a willingness to work with all administrations its brand.

Their absences this week underscore the increasing threat to the viability of a pro-Israel posture that depends on bipartisanship. Trump who has probably had the closest relationship of any president with an Israeli government, does not need to appear at AIPAC to burnish his pro-Israel credentials. And Sanders is nurturing a wing of the Democratic Party willing to redefine the U.S.-Israel relationship in ways antithetical to traditional pro-Israel postures.

AIPAC always asks conference participants — an estimated 18,000 this year — to keep it civil. But this year, in addition to the recorded requests at the outset of plenary sessions, two top board members took to the stage and pleaded for comity.

One was Amy Friedkin of San Francisco, a past president who is close to House Speaker Nancy Pelosi. The other, Alan Franco of New Orleans, has been a major giver to Republican campaigns.

“The best way to persuade us is with facts, not fire,” is what Friedkin said AIPAC had told its speakers, and she and Franco urged activists to refrain from cheering those who attacked political rivals.

Fire at times overwhelmed the facts.

Pence listed Trump’s Israel-related moves — moving the U.S. Embassy to Jerusalem, cutting funding for Palestinians and leaving the Iran nuclear deal — and accused Sanders of “openly and repeatedly attack(ing) Israel as a racist state.” Sanders has said that Israeli Prime Minister Benjamin Netanyahu is a racist, but has never said Israel is a racist state. The Jewish lawmaker said recently that denying Jews the right to self-determination is itself racist.

Pence culminated his speech with a call to re-elect Trump.

The call for Trump’s re-election earned Pence a standing ovation — a display that was likely to unsettle the leadership of a lobby that cultivates a careful distance from direct politicking at its events.

But Trump also found himself on the wrong side of an applause line from Bloomberg, another Democratic presidential hopeful. Anti-Semitism “can be found both on the right and the left,” the former New York mayor said, “but there is one fact that we cannot ignore: Presidential leadership matters. It sets a tone. It is either inclusive or exclusive, divisive or uniting, incendiary or calming.”

Throughout the passage — clearly meant as a swipe at Trump — the crowd applauded.

There were some moments that bolstered AIPAC’s efforts to navigate a bipartisan path in a time of profound division. Sen. Cory Booker, D-N.J., who dropped out of the presidential stakes last year, got what was until that point the most extended applause for a barnstorming speech upholding U.S.-Israel ties.

“I see it as my duty to protect the bipartisan nature of this relationship of Israel with the United States,” said Booker, who peppered his speech with Hebrew phrases. “As long as the people of Israel have to live under the threat of indiscriminate violence … we must always as a matter of human values stand for Israel’s security and defense.”

Following Sanders’ scorched earth statement last week, there was a rush of announcements from moderate Democratic candidates that they would attend or speak at the conference. Bloomberg spoke at the conference. Biden, the former vice president, addressed the throng by video, as did Minnesota Sen. Amy Klobuchar, who dropped out of the presidential race on Monday. Pete Buttigieg, the former mayor of South Bend, Indiana, was set to deliver a video address but dropped out of the race before his scheduled remarks. Elizabeth Warren, the Massachusetts senator, had already said she would not attend.

The difficulties of sustaining a robust relationship with Democrats were in evidence on the main stage and in side panels. On Monday morning, four strategists — two Democrats and two Republicans — delivered predictions on what the coming year would bring.

One of the Republicans, Brad Todd of Tennessee, predicted Pelosi would no longer be speaker of the U.S. House of Representatives in January, which drew loud applause — a startling response considering Pelosi’s closeness to an array of AIPAC-aligned figures like Friedkin.

A side panel titled “African-American Leadership in the U.S.-Israel Relationship” was mostly preoccupied with the difficulties of pitching pro-Israel to the black Democratic constituency.

“The reaction of some of my family members was really visceral and I was in shock,” Sherry Boston, a Democrat and a county prosecutor in Georgia, said of the time she told friends and family that she was set to tour Israel.

Rabbi Rick Jacobs, the president of the Union for Reform Judaism, had urged Sanders not to boycott, but said the tone of the conference helped validate the lobby’s critics.

“That two states for two peoples is controversial is extremely troubling,” Jacobs said, referring to the reluctance at the conference to address what critics say is the failure of Trump’s recent peace plan to preserve the two-state outcome. The plan nominally refers to two states but also sanctions Israel’s annexation of part of the West Bank.

An AIPAC-sponsored off-site session for “peace builders,” or backers of two states, was well attended and drew appearances by AIPAC CEO Howard Kohr and President Betsy Berns Korn — but was closed to press.

Korn, in an opening speech that praised Trump for his Israel-related moves, thanked the administration for “releasing a peace proposal that was developed in consultation with the leaders of Israel’s two major political parties” — phrasing that lauded the process and elided over the plan’s content.

The difficulty of garnering bipartisan support was evident as well in the legislative agenda that AIPAC activists are taking to Capitol Hill on Tuesday. AIPAC generally unveils new initiatives with its agenda, but none of the measures this year are new or innovative: support of defense assistance to Israel, AIPAC’s sine qua non; a letter and a resolution urging an expansion of Iran sanctions (the Trump administration has expanded sanctions nonstop); and letters decrying the International Criminal Court for targeting Israel.

Kohr in his address — mostly a broadside against Sanders that did not name the candidate — said that “our deepest desire is that Israel reaches an enduring peace with the Palestinians, leading to two states for two peoples,” but Palestinians were for the most part absent from the conversation.

A side session called “Promoting Palestinian Prosperity” included four panelists who were American or Israeli. When a questioner asked why no one on the panel was Palestinian, one of the panelists — Brad Gordon, a top retired official of the lobby — agreed that it would have been a good idea to invite one.

Ahead of the event, there was anxiety among conference organizers that the coronavirus scare would depress turnout and leave the impression that people were staying away because AIPAC was unpopular.

Those fears were not borne out: The halls were packed and AIPAC boasted of preparing 25,000 hot dogs among other kosher delicacies for those attending.

Activists were alerted ahead of their arrival that AIPAC had consulted with health experts and taken appropriate measures like “increasing the number of hand-sanitizer dispensers, adding additional cleaning crews to disinfect high-traffic areas, and deploying signage to encourage hand-washing and other recommended behaviors.”