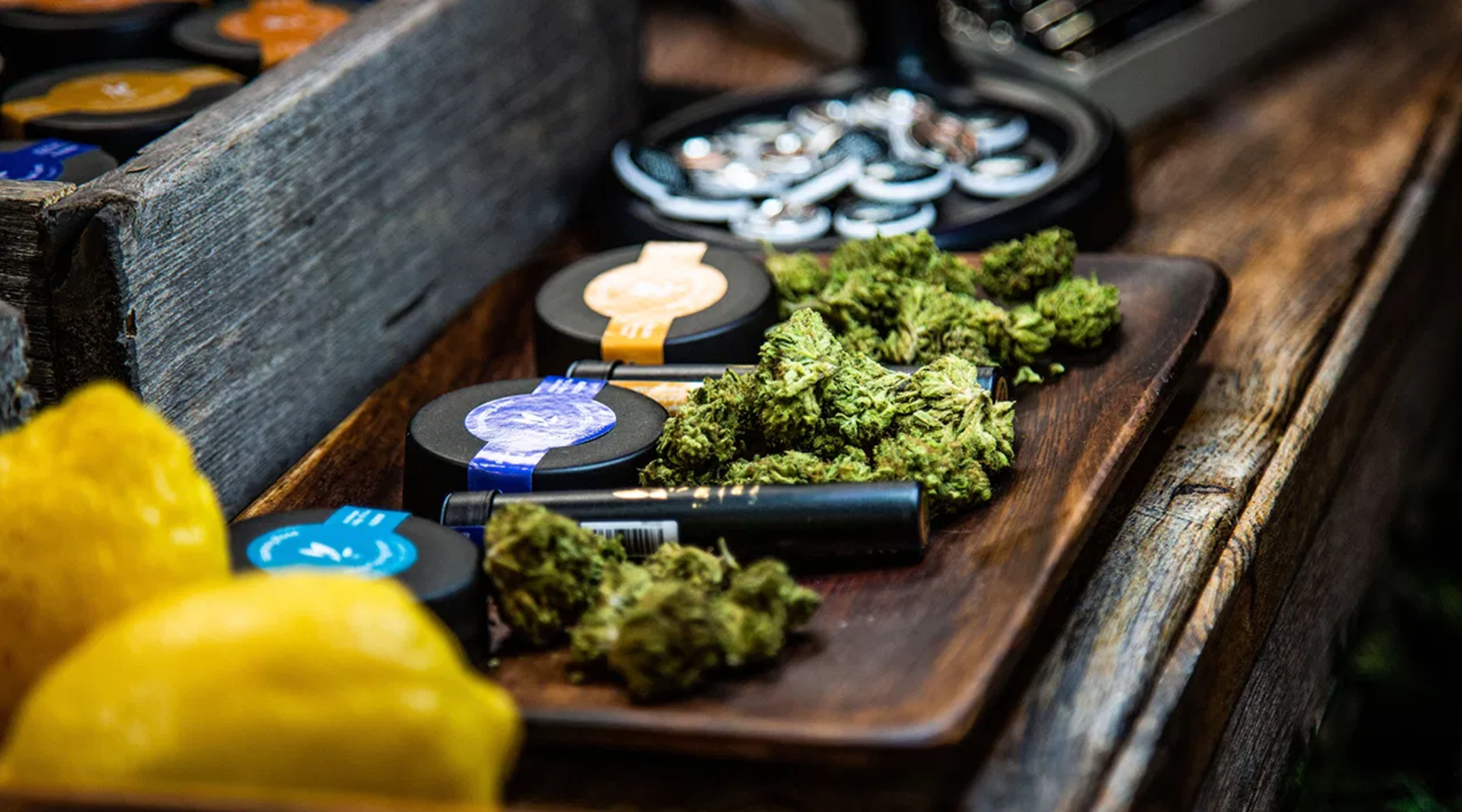 (J. The Jewish News of Northern California) — Michael Steinmetz was uncertain about inviting his grandmother to visit his marijuana factory in Mendocino County.

Masha Steinmetz is 89 and an observant Jew who cared for Holocaust victims as a nurse in Israel after the war. Originally from Romania, she lived most of her life in Venezuela, a predominantly Catholic country where cannabis is widely considered taboo.

For her visit to Mendocino, she brought enough kosher food to last her four days at the rural facility, off an unmarked road about 2.5 hours from San Francisco.

“I thought it was going to be a shock,” the younger Steinmetz said.

Steinmetz pulled out his smartphone to show me a photo of himself with Masha. They’re wearing white lab coats and holding giant bags of unprocessed cannabis flower. Both are grinning triumphantly.

“When I told her about the medical benefits and she saw the level of sophistication” at the facility, Steinmetz said, “she was pretty proud.” 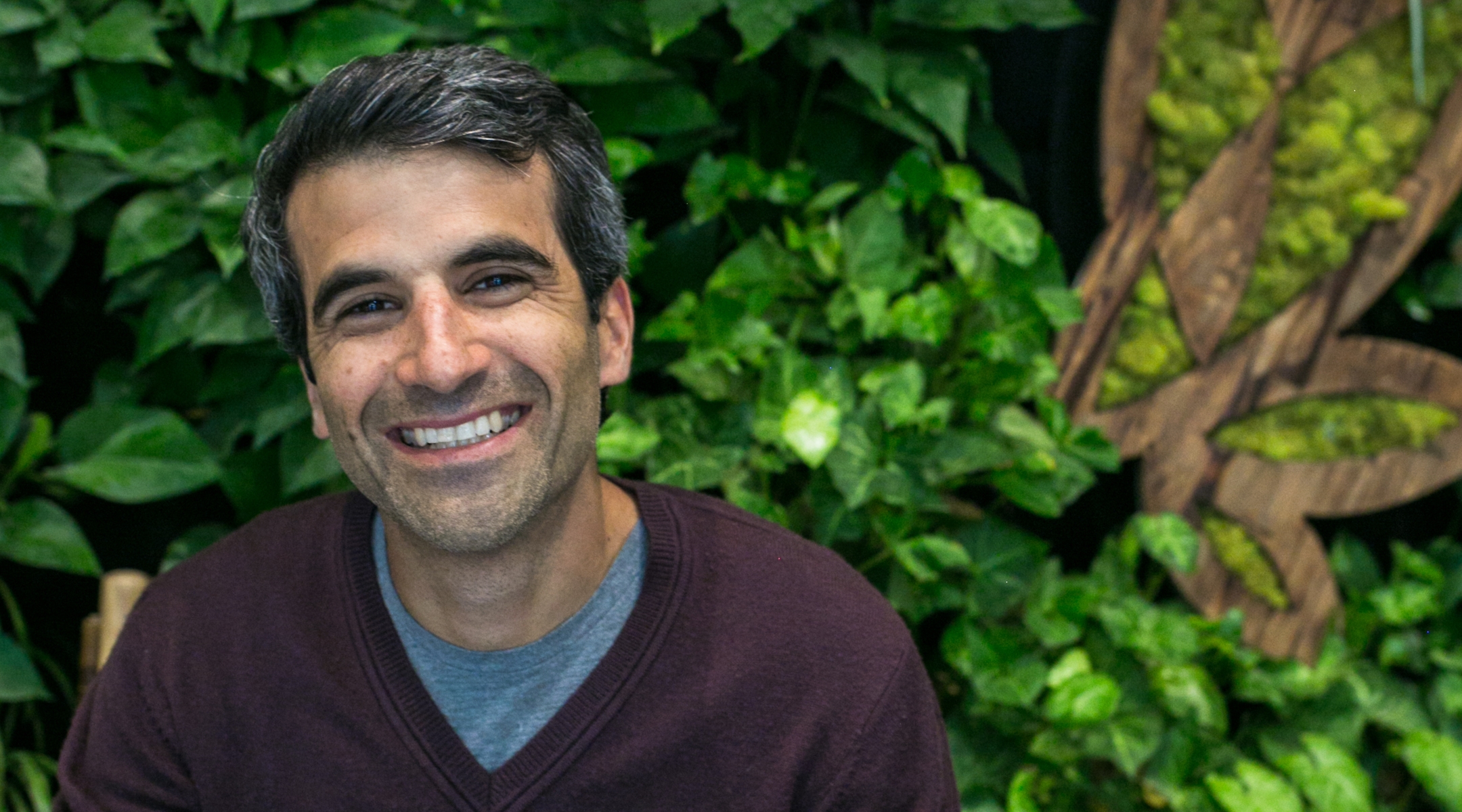 Michael Steinmetz is the Jewish entrepreneur behind Flow Kana and the Flow Cannabis Institute. (Courtesy of Flow Kana)

California’s king of cannabis is a nice Jewish boy from Caracas, Venezuela, with an engineering degree from Carnegie Mellon University. He’s worked at NASA’s Jet Propulsion Laboratory and was an investment banker for Merrill Lynch, though neither of those jobs quite suited him. Ultimately, he said, he wanted to engage his “entrepreneurial heart and spirit.”

Now 36, Steinmetz is the co-founder and CEO of Flow Kana, one of the hottest privately held cannabis companies in North America, and one of the largest in California. It has taken in $147.5 million in investment funding since its founding in 2014, according to startup tracker Crunchbase, though Steinmetz says the total is closer to $175 million when it includes early investment stages.

Though the company would not release revenue figures, its trademark opaque brown jars and hand-packed pre-rolled joints are ubiquitous at weed stores in the Bay Area and across California.

After recreational marijuana use was legalized in January 2018, Flow Kana became the top-selling cannabis flower brand in the state. (As opposed to oils, edibles, tinctures, lotions and vapes, cannabis flower is simply the marijuana plant after it’s been grown, harvested, cured and trimmed.)

“We’ve been called the Willy Wonka of weed,” Steinmetz told a “60 Minutes” correspondent who interviewed him at the factory for an October story. He’s also been featured in the New Yorker, Forbes and Men’s Journal, which crowned him “the new king of weed.”

Flow Kana does not actually grow marijuana. The company buys it from approximately 200 private farms in the historic epicenter of the once-illegal pot haven known as the Emerald Triangle — the sparsely populated region in the northwestern corner of the state covering Humboldt, Mendocino and Trinity counties. Flow Kana focuses on “craft” cannabis, which is grown outside on small farms, without pesticides, often by families who have been doing it for generations.

On the sprawling, rural campus that Steinmetz and his partners named “Flow Cannabis Institute,” employees ride around in what look like all-terrain golf carts, skipping from warehouses to construction sites to offices to residences, where a handful of executives live (most have second homes in the Bay Area).

With the help of investors, Steinmetz purchased the 300-acre property in 2017. The campus became Flow Kana’s processing hub, and Steinmetz and his wife, Flavia Cassani, a filmmaker, moved in the day after closing. (They also keep a home in San Francisco).

The cannabis is processed on a production floor at the center of the campus.  It looks at first like any factory floor, but instead of assembling furniture or packing jars of peanut butter, employees are sifting through containers of cured marijuana to pick out morsels appealing enough to sell outright. They assemble pre-rolled joints with the rest.

After the product is inspected, processed and packaged, employees load it on trucks to be shipped to distribution hubs in Sacramento, Los Angeles and Oakland.

Steinmetz’s house is a white colonial that employees refer to as the “White House.” It was about a week before Christmas, and stockings hung from the mantle and two 3-foot nutcrackers stood astride the fireplace. A small Hanukkah menorah poked out from behind the tinsel. 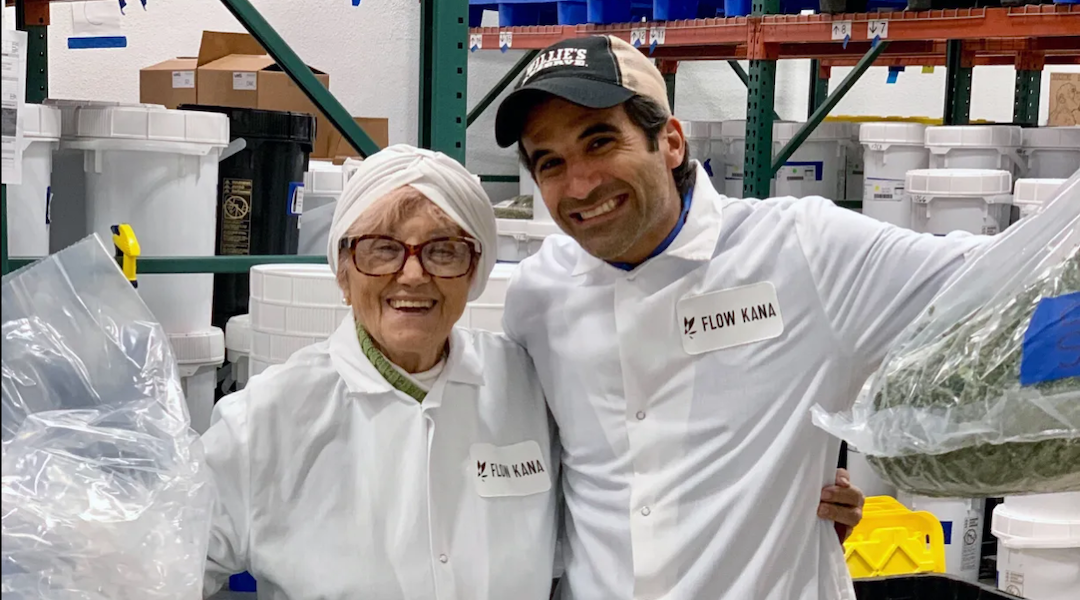 Michael Steinmetz and his grandmother Masha during her recent visit to the Flow Kana factory. (Courtesy of Flow Kana)

“We have both,” Steinmetz said with a laugh. “My parents are both Jewish, but Venezuela is a predominantly Catholic Christian country. So I was raised with both a hanukkiah [menorah] and a Christmas tree.”

He said he celebrated Shabbat dinners and Jewish holidays with his grandparents.

Steinmetz says that while Venezuela has a conservative attitude toward marijuana, things were different in his family. “My mom consumed cannabis for medical reasons,” he said. “I grew up in a cannabis-friendly home.” He was into cannabis culture long before he became involved in the business and still enjoys smoking weed.

Steinnmetz’s decision to enter the cannabis industry didn’t come via a lightbulb moment; it was more like a gradual awakening.

Between 2010 and 2012, he was running a distribution company in Venezuela that traded stevia, the plant-based sweetener, and he was working on a photo sharing app similar to Instagram that never materialized. He and his wife alternated between Caracas and Palo Alto, spending around three months there and three months here.

With his medicinal marijuana card, he visited the early patchwork of dispensaries operating in the Bay Area under Prop 215, the “Compassionate Use” law approved by voters in 1996 permitting medical use. Every time he returned to California from Caracas, he would see new developments in the industry. “New dispensaries, new products, new brands,” he said. “I just felt the growth and the momentum of it.”

When he realized California came close to legalizing recreational use under Prop 19 in 2010, it gave him an inkling of where the market might head. “I thought, wow, this is really going to happen in our lifetime.”

In 2013, he experienced just how much money could be made in the industry. He volunteered as an unpaid business consultant at a medical dispensary in the East Bay. It took in between $80,000 and $100,000 in sales every day.

“It was so unsophisticated, so mom-and-pop,” he said. “Inventory everywhere. It was a disaster.”

In 2014 he co-founded Flow Kana with two fellow Jews: Adam Steinberg and Diego Zimet, a Uruguayan who built the company’s first website. Steinmetz said he met Zimet through a network of Latino Jews in Palo Alto.

In many ways, California’s Gold Rush of the 19th century is now its green rush of the 21st. The Golden State is the top-grossing cannabis state in the country, with over $3 billion in legal sales in 2019. That’s $1 billion more than its nearest competitor, Colorado, and about three times more than all of Canada.

And yet, stringent regulations, burdensome taxes and prohibitive local laws still severely hamper the industry’s growth, Steinmetz and other cannabis business leaders say. In order to actually sell cannabis within a given municipality, it has to be approved by local officials. According to Marijuana Business Daily, about two-thirds of municipalities still prohibited retail sales as of last year. Marin and San Mateo counties, for example, prohibit marijuana storefronts.

Simply put, there are not nearly enough legal retailers in California to satisfy the state’s massive appetite for weed. As a result, the illegal market in California still takes in about $8.7 billion per year, more than twice as much as the legal market, according to the research firm BDS Analytics. Steinmetz called the situation a “disgrace.”

Investment in the industry reached a fever pitch in 2018 with more than $13 billion raised, according to Viridian Capital Advisors. But despite big promises, marijuana remains banned under federal law, and companies still can’t trade across state lines, let alone international borders. Traditional banks still refuse to cooperate with cannabis companies, no matter how lucrative they are.

As a result, growth has been disappointing. In November, Flow Kana had to lay off about 20 employees, most at the corporate office in Oakland. It joined a number of other cannabis companies in the state in a series of layoffs that left hundreds of workers jobless.

Still, there is good reason to be optimistic about the future of California weed — and Steinmetz certainly is. Californians spend more than $1 billion on marijuana each month, between legal and illicit sales. Over the next four years, legal sales in California are projected to more than double. 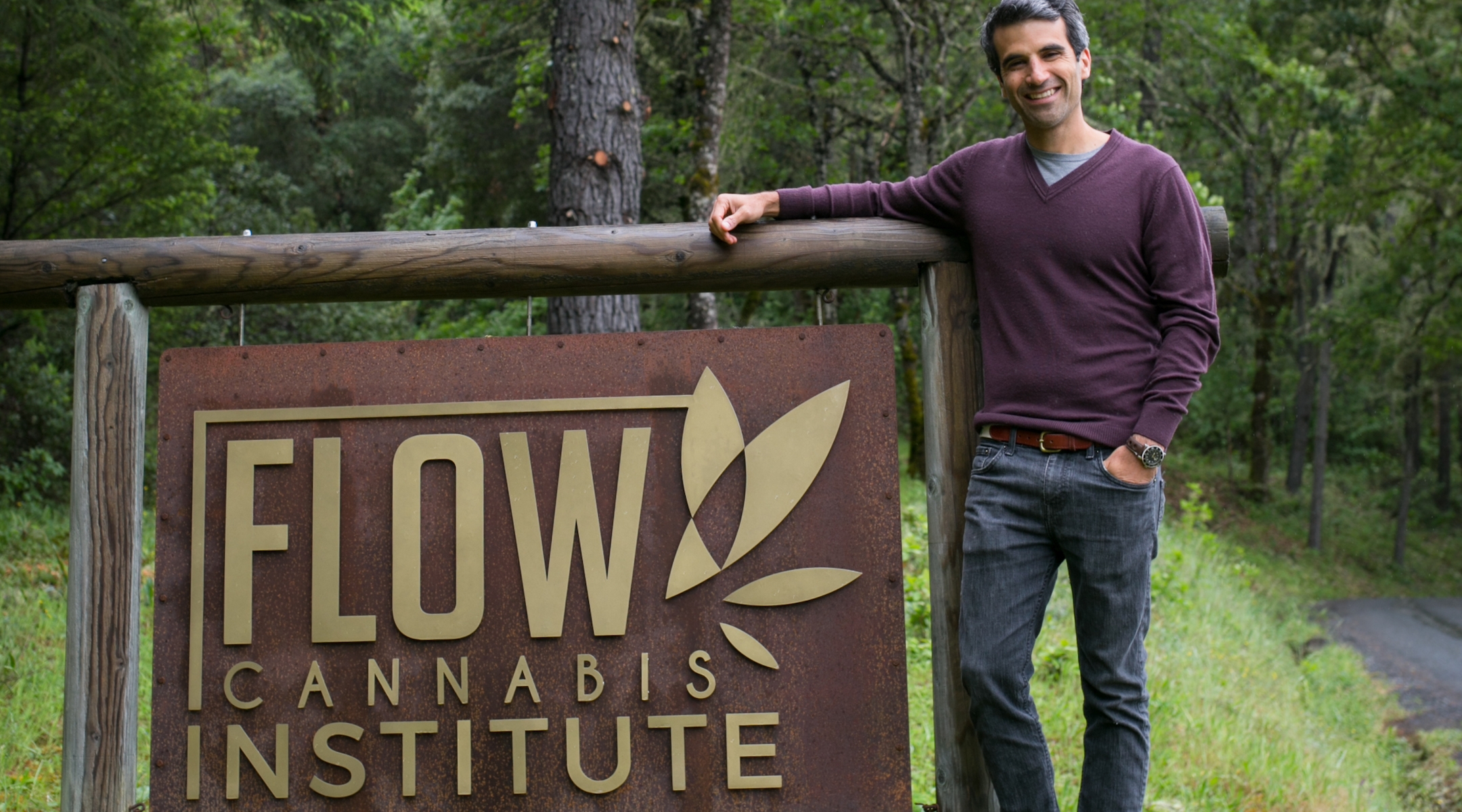 So what does Steinmetz envision for the future of his business? He says he does not make decisions thinking of a buyout. Instead he plays “the infinite game.” His sights are trained on tomorrow’s industry: the end of federal prohibition, the slackening of local regulations and the beginning of a new day for cannabis, when it will be treated like any other regulated substance.

“Our decisions are five, seven years out,” he said.

Almost everywhere you look at Flow Cannabis Institute, there is temporary fencing, dirt movers, laborers and the din of construction. The company is expanding beyond its core product, renovating an 18,000-square-foot warehouse to manufacture concentrated oils for use in popular products like vape pens and edibles. It is working on a 40,000-square-foot showroom the size of an airplane hangar and five stories high.

He envisions distributors and retailers from all over the world visiting Mendocino County to browse “just shy of a million pounds” of cannabis in the showroom, displaying “thousands and thousands of different strains” at “hundreds upon hundreds of different price points.” Ultimately, Steinmetz is placing a big bet on California.

“The long-term dream is to make it accessible for out-of-state, and from other countries, to be able to access the best cannabis in the world from the best growing region in California,” he said. “I think nobody’s going to care for Nebraska-grown cannabis, or Massachusetts-grown cannabis, or indoor-grown cannabis somewhere else.

“We want to put the Emerald Triangle on the map, globally.”