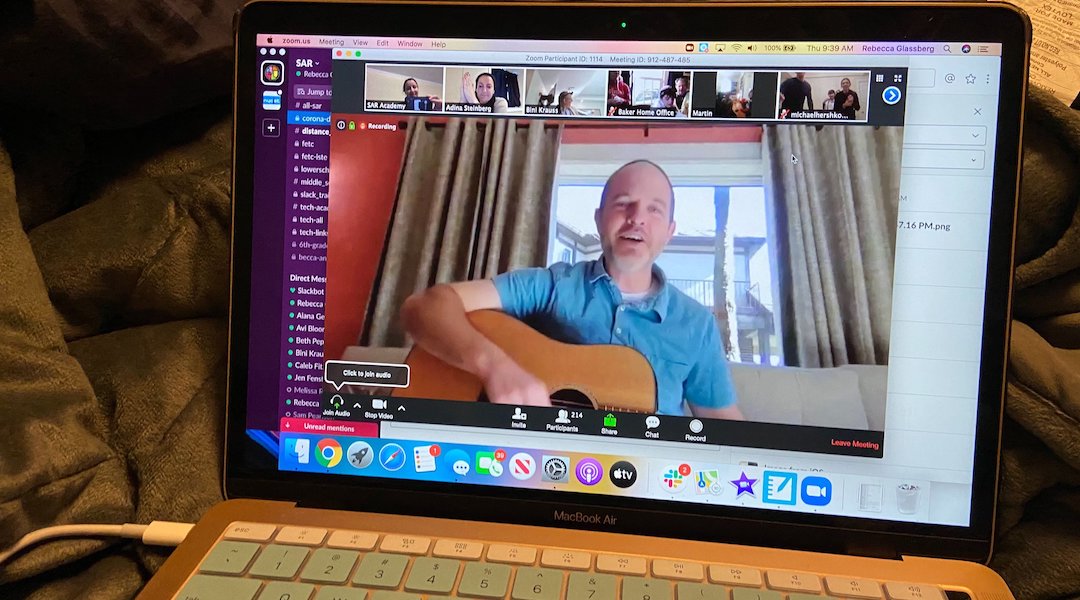 So it was a challenge for the two biology teachers — and married couple — when their Jewish high school was closed Tuesday and its students quarantined because some of their classmates have contracted the coronavirus. For now, students are attending class via videoconference, which means hands-on lessons are no longer a possibility.

Brandiss grabbed whatever she could at home to illustrate the lessons for which she would have had ample supplies at school. A stretched-out electric cord illustrated the length of a digestive system. A poster of an alligator with its mouth open stood in for the skulls in her classroom. And a six-inch plant held up to her computer’s video camera took the place of the classroom’s tall citron tree, which students can’t tend this week.

“I discovered that the lessons could really be taught interactively, not as lectures,” Brandriss said. “The kids responded, they asked their own questions, they responded to each other. It was wonderful how responsive they were.”

Brandiss, Goodman and their colleagues at SAR are among the many educators across the country whose schools are turning to online learning during the coronavirus epidemic. The Centers for Disease Control and Prevention has encouraged schools and districts to prepare for potentially extended interruptions to school attendance, a challenge that could be hard to meet even with ample planning.

For SAR, the interruptions came faster than anyone expected. The school has found itself at the center of the coronavirus outbreak in New York City, which has spread through more than a dozen people in and around the Orthodox community of Westchester County. Students and parents from the school, which is in the Riverdale neighborhood of the Bronx to Westchester’s south, are infected. The school is closed until at least March 11. Families are grappling with the same unknowns as the rest of the country, but find themselves physically much closer to those who have gotten sick.

Amid the uncertainty, SAR has tried to maintain structure by building an extensive remote learning operation in a matter of days. Much of the high school — four or five class periods per day, so far — is being run through the videoconference platform Zoom. Teachers are still giving lessons and students are still going to class. Except now it’s through their school-issued iPads while they sit at home.

“It’s remarkable how the dynamic was very natural, organic,” said Rabbi Tully Harcsztark, the school’s principal and a teacher of ninth-grade Talmud, including via video chat this week. “It was an eager energy on the part of the kids. … They don’t really have that much to do and there’s anxiety around what this all means, and having a schedule, being able to connect with their friends, it’s like, this is good. It’s normal.”

Planning for distance learning began last week at the school — during the coronavirus outbreak, but before it came to Westchester. When Rabbi Avi Bloom, the school’s director of technology, found out that the plans would have to go into action in a matter of days, he embarked on a whirlwind of educating the SAR teachers on a number of how-tos: managing a Zoom conference, sharing their screens, and having the students raise their hands virtually or enter a group chat, as well as break into smaller groups within the conference. Plus more.

“The online learning has been intense,” Bloom said. “It’s been kind of an insane few days of getting it up and running, and really inspiring. There is a tremendous amount of learning happening, of connecting happening.”

Prizmah, an umbrella group for Jewish schools, has received dozens of inquiries in recent days on how to deal with the coronavirus. It set up a detailed information page with examples of letters that schools have sent out, resources for online learning, guidance regarding planning (or canceling) school trips, maintaining child safety during online learning and more.

Rabbi Sam Berkovitz, who teaches Bible to 10th-graders at SAR, says he misses “the certain wonderfulness of what you don’t expect a kid to say that’s so insightful,” as well as walking around the classroom assisting students as they study text in pairs.

But some teachers also see the bright side of the online classes. Berkovitz cites the orderliness of videoconferencing.

“There’s a certain amount of control you have,” he said. “You can’t mute kids in real life. One student speaks at a time, so you can have a discussion.”

SAR isn’t only conducting classes via video chat. On Thursday, a middle schooler read Torah for his bar mitzvah while students tuned in via livestream. Another of the school’s families is sitting shiva, a time for collective communal comforting following a death that has been made impossible due to the quarantine. Instead, friends and family called and video chatted to share condolences with the mourners.

“SAR is a very strong community,” Harcsztark said. “People really connect with each other and support each other in deep ways. That’s been the feeling here.”

SAR Academy, the lower school, is also using videoconferencing for some classes: Rami Lapin, 11, did Mad Libs with his English class this week and yoga with classmates during a virtual physical education class. The students are also given activities to do themselves at home.

Rami’s mother, Ann, is a fitness trainer who has been able to be home with her kids during the school closure. Along with Rami, she has two daughters, 14 and 16, attending SAR High School. Aside from giving them an old-school bell to let her know if they need anything, she has let them sit in their rooms — and go to class.

“They’re all Zooming in, they’re almost all staying to the end of a session, even if they go over their time,” she said. “They don’t know how proud I am of how engaged they are.”