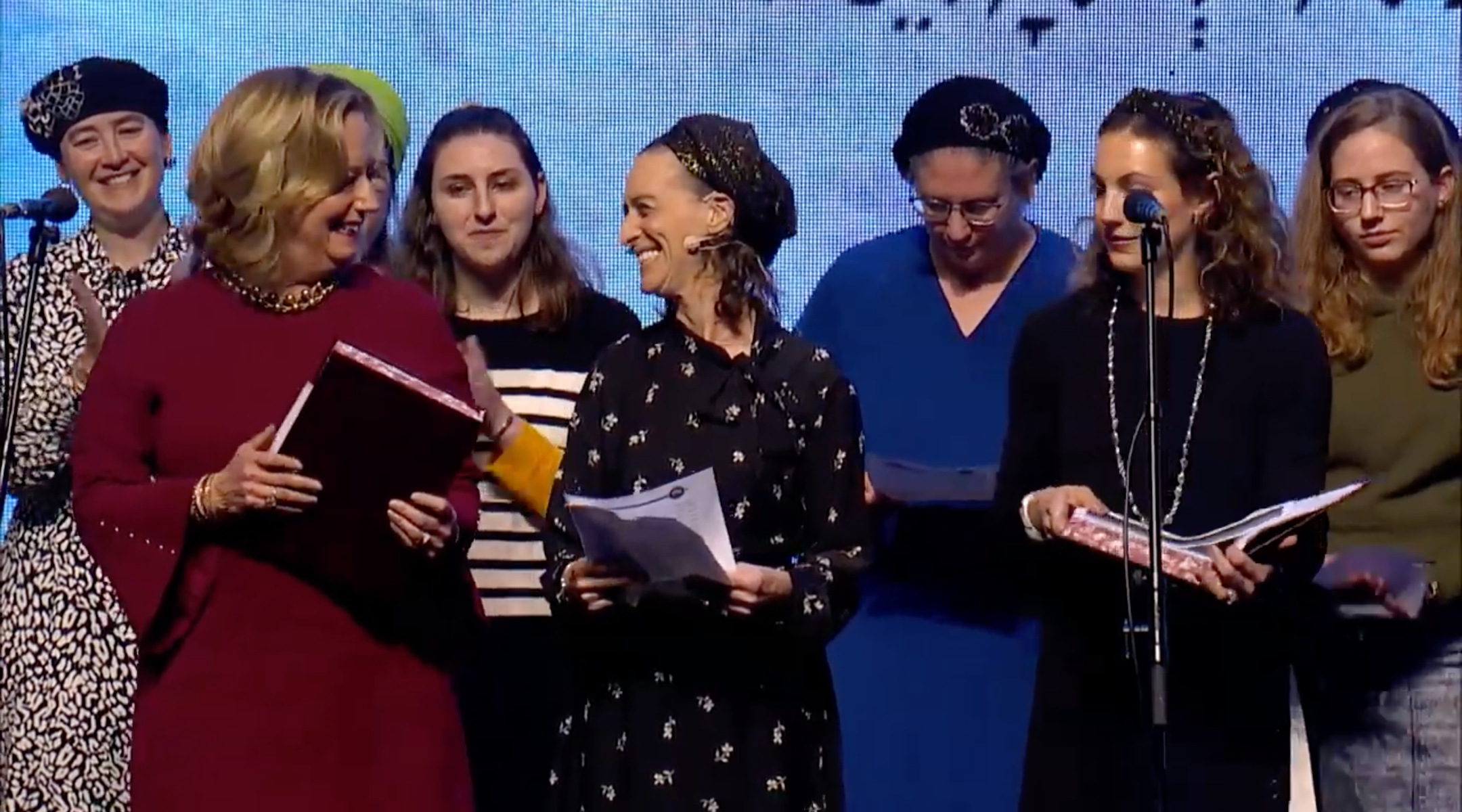 Women celebrate completing the 7 1/2-year cycle of Talmud study at a ceremony held by the organization Hadran in Jerusalem, January 2020. (Screenshot from YouTube)
Advertisement

(JTA) — In December, when she was given two to four years to live, Catherine Johnson decided to start studying a page of Talmud a day.

An expansive work of Jewish law and narrative written in Aramaic and Hebrew, the Talmud spans 2,711 double-sided pages. At a rate of one page studied each day, a practice called Daf Yomi (Aramaic for “daily page”), the whole thing takes 7 1/2 years to complete.

Johnson isn’t sure she’ll be able to finish it. But every page, every day, is a small victory.

“It just struck a chord with me,” said Johnson, who has ovarian cancer. “Time was a big deal for me. People were putting constraints on the amount of time I had and the idea of starting something that would take 7 1/2 years to complete — it felt like a statement of hope.”

Johnson’s cancer isn’t the only thing that sets apart her embrace of Talmud study. Traditionally, the Talmud has been mainly the domain of Orthodox men. Johnson is a non-Orthodox woman living in North Wales, in the western part of the United Kingdom, more than an hour’s drive from a synagogue.

And she’s not alone. The latest Daf Yomi cycle, which began in January, has drawn a much broader following than perhaps at any time during its century-long history.

Previously, only those with the fortitude to show up in person every day for a lesson in millennia-old Jewish law — or study it on their own or with a partner — could participate. But with the proliferation of online tools to study Talmud in translation, and Facebook groups to connect with others who have undertaken the daily commitment, a much wider spectrum of people seem to have taken it on.

For those who live far from other Jews, Daf Yomi has created a virtual community of fellow learners.

“On a personal level, it stopped the isolation that I felt and it personally supported me,” said Johnson, who now texts daily with other women studying Daf Yomi that she has met through Facebook. “It’s lovely to have other women who are intelligent and smart and they know things I don’t know and they have a background different from me.”

Part of what has enabled the broadening of Talmud study is the proliferation of online tools that make the text easily accessible to English speakers. Sefaria, the free online library of Jewish texts, offers a line-by-line translation of the entire Talmud. (Sefaria CEO Daniel Septimus is a board member of 70 Faces Media, JTA’s parent company.)

My Jewish Learning launched an email series in January featuring a daily teaching based on that day’s page. (Both My Jewish Learning and JTA are subsidiaries of 70 Faces Media.) And a range of podcasts, Facebook groups and other digital resources enable the study of the daily page from virtually anywhere.

“One of the reasons people were eager for it is times were tough emotionally, and people were looking for some kind of transcendental check-in, something that helps them rise above reacting to the right-now,” said Meszler, the spiritual leader at Temple Sinai in Sharon Massachusetts, a Reform synagogue. “I think everyone is looking for meaning and trying to make sense of our world.”

Online learning isn’t ideal for everyone. Garry Stein, a Canadian who lives in Hong Kong and does business in Ghana, appreciates the opportunity to access the Talmud from his phone across many time zones, but says it isn’t the same as studying in person with a partner, a traditional mode of learning known as “hevruta.”

“It is much harder to do it in a community when you’re traveling as much as I am,” he said. “I do wish I had someone I could talk to regularly while studying online. The posting [on Facebook groups] is useful to me, but to be honest, the quality of the posts is very uneven.”

“Some of the stuff, especially as a woman, is very difficult,” said Rene Rose, who lives in rural Vermont and began studying after reading “If All the Seas Were Ink,” a memoir by Ilana Kurshan about her experience studying Daf Yomi.

“We have to go back in history,” Rose said. “We can’t project a 21st century consciousness there. The Temple was destroyed, people were scattered, and the people talking here were trying to re-create something in a different format.”

Johnson and her texting group also puzzle at the Talmud’s stories about women — in particular, one about a rabbi who would sit outside a bathhouse and check to make sure the women immersed themselves properly. But she also took comfort in a rabbinic discussion of illness and whether it comes from God, something she’s grappling with in her own life.

“Sometimes the sages say, ‘It’s God’s punishment,’” Johnson said. “They’ve got a divine aspect to why the person is ill, and that can be really difficult to learn on those days, that can be tough. One of the things that gives me comfort is the sages are just the way we are today. We still don’t understand why some people get sick, and some people don’t, and they were just trying to understand where God was in that.”

And of course, each day of study is another day in Johnson’s fight with cancer. Seven-and-a-half years is a daunting timeline, but she’s determined to complete it.