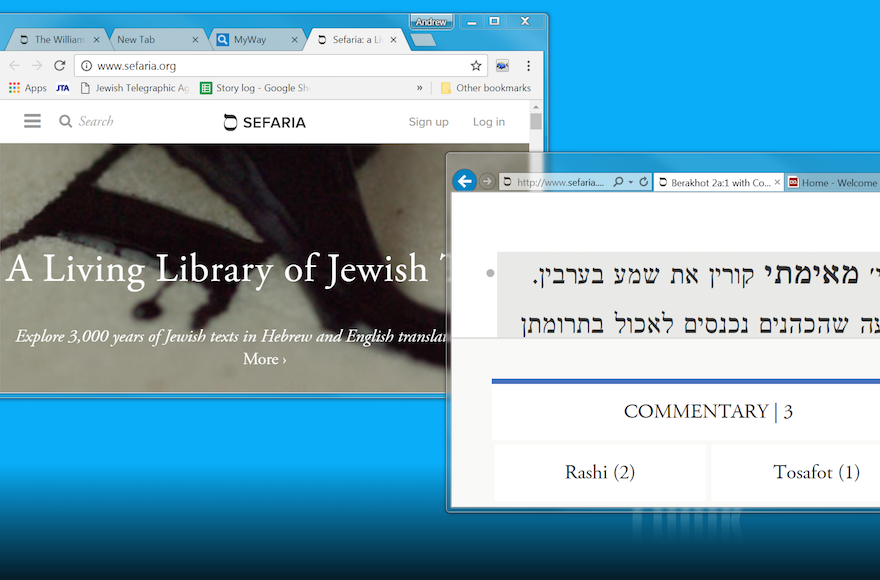 The interface of the Steinsaltz Talmud on Sefaria includes line-by-line translation, along with links to commentaries and references to a range of Jewish sources, which appear in a separate vertical. (Screenshot)
Advertisement

NEW YORK (JTA) — For centuries, studying a page of the Talmud has come with a bevy of barriers to entry.

Written mostly in Aramaic, the Talmud in its most commonly printed form also lacks punctuation or vowels, let alone translation. Its premier explanatory commentary, composed by the medieval sage Rashi, is usually printed in an obscure Hebrew typeface read almost exclusively by religious, learned Jews. Even then, scholars can still spend hours figuring out what the text means.

And that’s not to mention the Talmud’s size and cost: 37 full volumes, called tractates, that can take up an entire shelf of a library.

Helping students and readers crack these barriers and access what amounts to a library of Jewish law, ritual, folklore and moral guidance has been an ongoing endeavor. Milestones include the first (unfinished) attempt at an English translation by American publisher Michael Levi Rodkinson at the turn of the 20th century, an abridged version by Rabbi Chaim Tchernowitz in the 1920s, and “The Soncino Talmud on CD-ROM” from 1995.

Now, a website hopes to build on these earlier breakthroughs and break all the barriers at once.

Sefaria, a website founded in 2013 that aims to put the seemingly infinite Jewish canon online for free, has published an acclaimed translation of the Talmud in English. The translation, which includes explanatory notes in relatively plain language, was started by Rabbi Adin Steinsaltz in 1965 and is considered by many to be the best in its class.

The Steinsaltz edition of the Talmud has been in print for decades, in both modern Hebrew and English translation, and parts of it already exist on the internet. But this is the first time it’s being put online in its entirety for free. The online edition also opens up the copyright license, meaning that anyone is allowed to repurpose it for teaching, literature or anything else.

“Ninety percent of the world’s Jews speak Hebrew and English,” said Daniel Septimus, Sefaria’s executive director. “The Talmud is in Aramaic. It will now be online in Hebrew and English. From an accessibility point of view, it’s a game changer.”

(Septimus was formerly the CEO of MyJewishLearning, one of JTA’s partner sites, and sits on the board of 70 Faces Media, JTA’s parent company.)

Sefaria rolled out 22 tractates of the Steinsaltz English edition on Tuesday, and will be publishing the entire Hebrew translation over the course of 2017. The rest of the English edition, which is as yet unfinished, will be published online as it is completed. The translation’s publication was made possible by a multimillion-dollar deal with the Steinsaltz edition’s publishers, Milta and Koren Publishers Jerusalem, and financed by the William Davidson Foundation, a family charity. The edition will be known as The William Davidson Talmud.

Translations and explanations of the Talmud already exist online. A range of apps promises free translations that can be unreliable. ArtScroll, the Orthodox Jewish publishing giant, offers a digital version of its own complete English Talmud translation for $600. A comprehensive digital Jewish library published for decades by Israel’s Bar-Ilan University is also available for purchase, but not with English translation.

Besides its edition being free, Sefaria’s founders say its version of the Steinsaltz Talmud is better than competitors because it is untethered to the Talmud’s classic printed form. Since the mid-15th century, the Talmud has been published with unpunctuated text in a column in the middle of the page, its commentaries wrapping around it.

Like all of Sefaria’s texts, which range from the Bible to Hasidic texts and works of Jewish law, the Steinsaltz translation is published sentence by sentence in a mobile-friendly format, with the translation appearing below the original. The format also allows Sefaria to link between the Talmud’s text and the myriad Jewish sources it references, from the Bible to rabbinic literature. 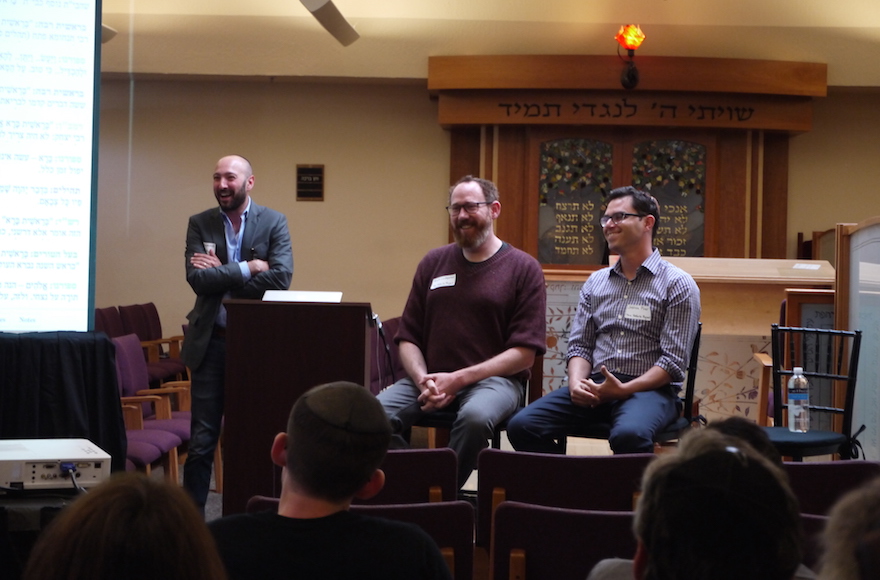 Click on a line of Aramaic, and a string of commentaries, verses or parallel rabbinic sources will pop up. An algorithm Sefaria uses, which just added 50,000 such links to the Talmud, is also reverse engineered: Click on a verse in the Bible and you will see where it’s quoted in the Talmud or other books.

“This entire web of connections opens up to you just by clicking and touching,” said Sefaria’s co-founder and CTO, Brett Lockspeiser. “It’s so clear that the structure of Jewish learning had this network-type experience. This sense of interconnectedness was already there and just needed to be brought out.” The other co-founder is the author Joshua Foer.

The project is the biggest step forward in Sefaria’s larger goal of democratizing Jewish religious scholarship by making it digitized, free and intelligible to everyone. The site also has a tool for Jewish educators to create source sheets, or short study aids with quotations from a range of Jewish books. Users have already created 50,000 such sheets.

“We have no idea what kind of devices people are going to be learning Torah on in 10 years, but we know those devices will be chomping on digital data,” Septimus said. “So having a database of these texts that’s open, flexible, free for use and reuse is a good thing.”

Another site which shares that goal, the Open Siddur Project, provides Jewish prayer text for free so people can put together their own prayer books. Its founder, Aharon Varady, said the modern-day emphasis on intellectual property  clashes with the Jewish tradition of sharing knowledge openly and freely.

“It’s the idea that Torah should be transferred without limitations,” Varady said. “Copyright is an innovation with fairly different interests than that of a living culture that is growing by educators sharing material, by teachers making source sheets with others.”

The site already offers thousands of books in open-source code, so anyone can use them, and hopes to add thousands more — the entirety of Judaic literature. Lockspeiser, a former Google software engineer, said that compared to indexing billions of web pages, the Jewish canon is no tall order.

“People can’t get into the Talmud because they don’t know it’s there,” Lockspeiser said. “If it’s not in English and you type in English words in the [online search] query, it’s not going to come up. We’re opening this up just in the sense that people will find it that didn’t even know they were looking for it.”