He wanted to encapsulate Beijing’s Jewish community in a Passover Haggadah. The coronavirus complicated that. 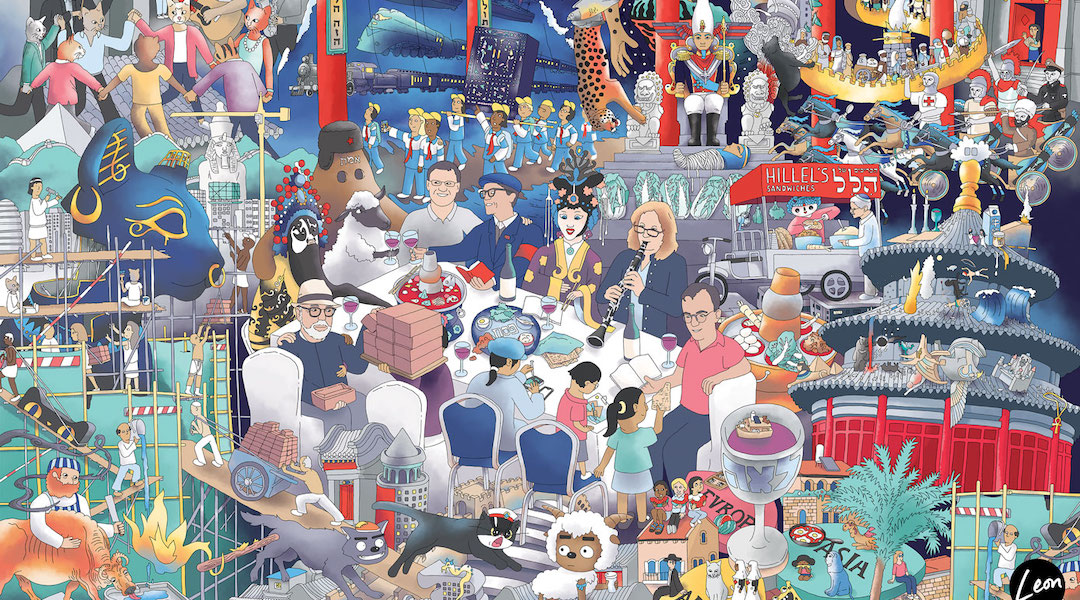 (JTA) — Unlike Shanghai or Hong Kong, which received Jews fleeing from World War II, Beijing does not have a robust Jewish history.

In the words of Joshua Kurtzig, former president of the Reform congregation there, the massive Chinese capital is a “very transient city,” especially for Jews — meaning that many pass through without putting down generations of roots.

Some 1,000 Jews now live in Beijing among its 20 million residents, and the congregation, Kehillat Beijing, has no permanent clergy.

“There are no Jewish tours here,” said Leon Fenster, 33, a London-born artist who is active in the Beijing Jewish community.

In an attempt to give the community some defining character — and intertwine it with the city’s millennia of rich history — Fenster has illustrated a Beijing-themed Haggadah in which the Exodus story takes place in the modern-day capital. The images are lush and full of meaning in both the Chinese and Jewish cultural contexts.

Fenster planned to inaugurate the Haggadah by using it to lead a massive seder in Beijing, but the rapid spread of the coronavirus, which is keeping all of China under a draconian lockdown, has complicated the effort.

After the outbreak picked up steam, Fenster traveled to Taiwan, which is seen as a safer territory because of its effectiveness so far in containing COVID-19. The Beijing community, according to Fenster, will not celebrate a physical seder this year and is holding virtual Shabbat services. 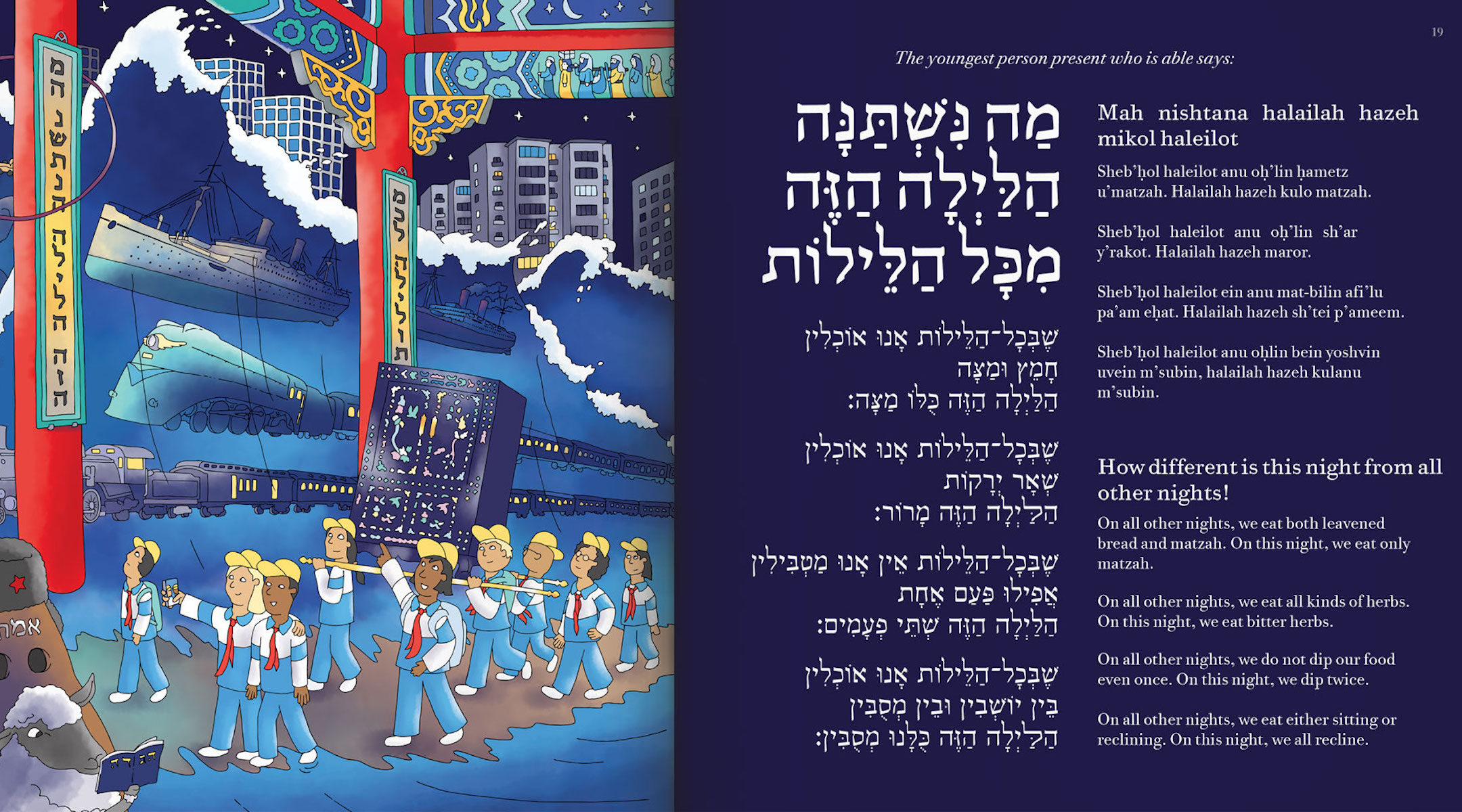 In this image from his Haggadah, Fenster depicts the Israelites as children dressed in Beijing school uniforms. “They are accompanied by the trains and ships that have carried Jews to safety in China, escaping European anti-Semitism,” he said. (Leon Fenster)

Fenster has been interested in illustrating the essence of the Jewish Diaspora since he was in college. Trained as an architect at University College London, he won a Presidential Medal Award given by the Royal Institute of British Architects in 2014 for his drawings on how synagogues should reflect the Jewish diasporic condition. In 2015 he moved to Beijing as a scholar in residence at Tsinghua University, where he drew his first non-architectural drawing: a Haggadah concept.

He laid this idea aside and continued painting hypertextual drawings depicting life in the city, eventually exhibiting works in galleries in Beijing, the United Kingdom and Israel. But the idea for a Beijing Haggadah returned as he came to experience the transient nature of the Beijing community firsthand.

“There is a Diaspora of Beijing Jews who moved out of the city and think of China as a place where they found their Judaism,” he said.

Kurtzig, now the president of Kehillat Shanghai, echoed that feeling. 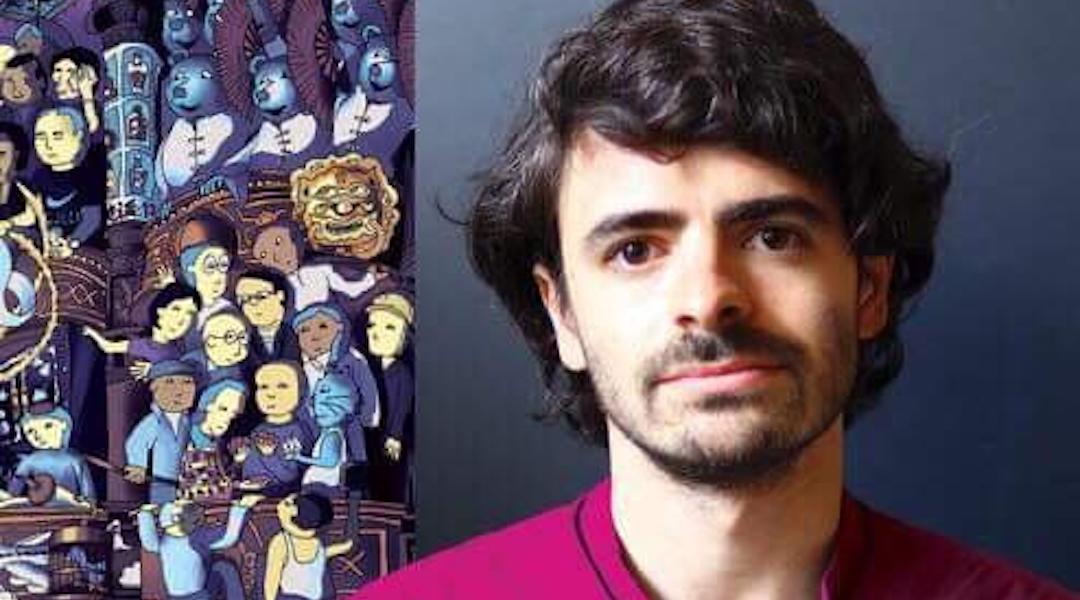 Leon Fenster, above, dedicated the Haggadah to his late friend, Michael H.K. Cohen. (Courtesy of Fenster)

The 180-page Haggadah is written in Hebrew, English and Chinese. According to Fenster, he needed to be careful not to incorporate too much Chinese because the government could see the project as proselytizing, which it does not permit.

The book situates landmarks and cultural markers of the city in the myth of the Exodus. Jews walking through the parted Red Sea are dressed like Beijing schoolchildren. The Four Children wear different Beijing opera masks — an ancient custom born in the city — that designate certain character types.

“The more you know Beijing, the more this will have an emotional meaning for you,” he said.

With 40 to 50 core members, Kehillat Beijing’s Reform community (Chabad only opened a branch in the city in 2001) is made up of expatriates from the United States, England, Australia, Canada, France and the United Kingdom. Members lead the prayer services.  Passover is one of the biggest events, Fenster said, drawing more than 80 participants to seder and taking place in the congregation’s main venue, a ballroom of a social club. 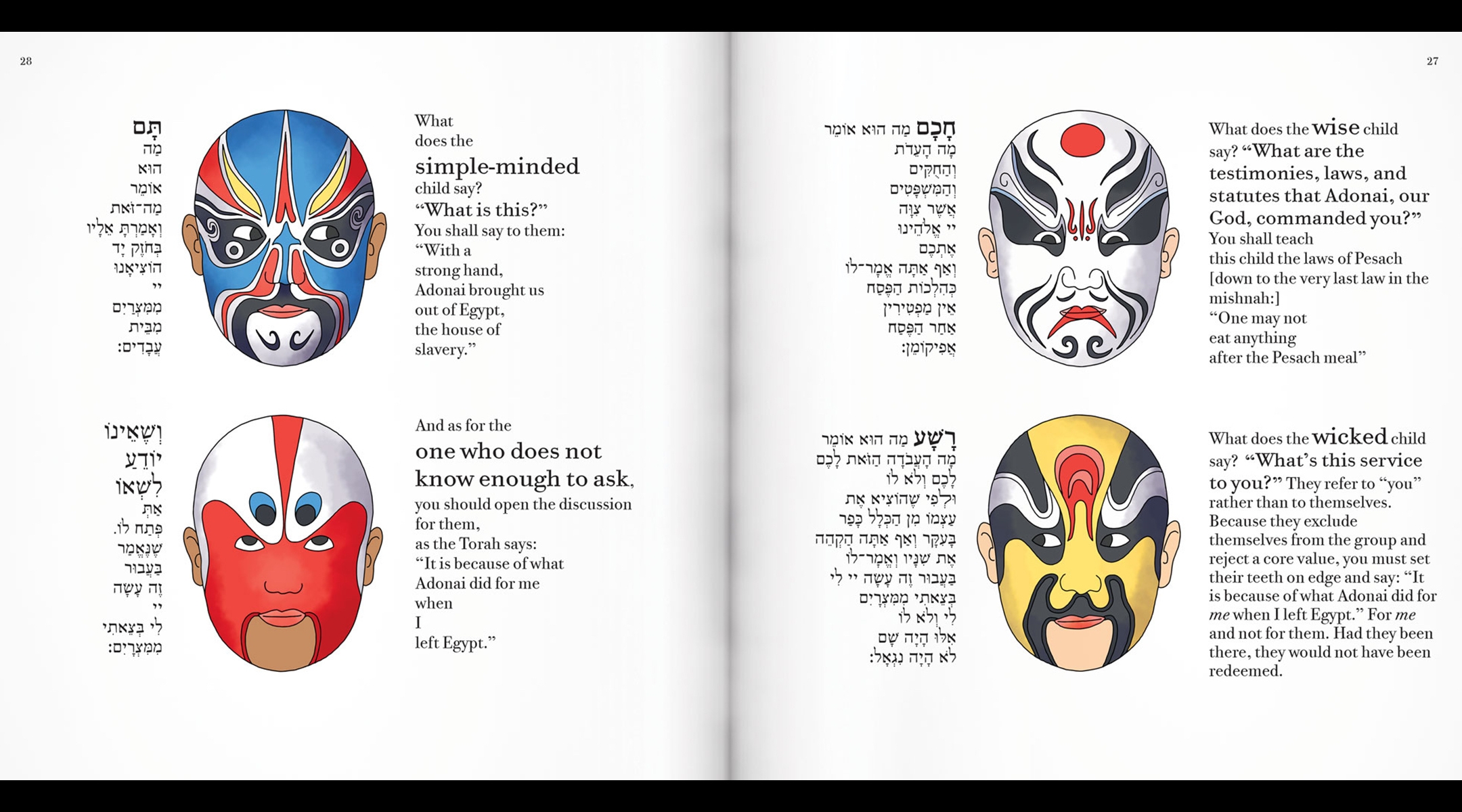 Kehillat Beijing was established by an American businesswoman, Roberta Lipson, who came to Beijing in 1979 with an MBA from Columbia University. She would go on to found the Chinese hospital company United Family Healthcare and become its CEO. She’s now married to Ted Plakfer, the Beijing bureau chief for The Economist.

One of the group’s first communal events was a Passover seder, Lipson has written, at the city’s Foreign Service International Club. Members had to teach the club’s kitchen staff how to make gefilte fish.

Over the years, Lipson has established a warm relationship with the more Orthodox Chabad community that has moved into the city.

“I appreciate that people now have a choice of how they want to approach Jewish observance and prayer. Kehillat Beijing exists for those who come from a liberal, conservative, reform, reconstructionist approach and for the many ‘mixed families,’” she wrote for the website of the Jerusalem Unity Prize. “On the other hand, there are now many people who live in or frequently visit our city who are more comfortable at Chabad services. We all celebrate the diversity we share and find it fulfilling that there are options.”

The Haggadah project was sponsored by Stephen M.L. Cohen and Carol Fishman Cohen in memory of their son, Michael H.K. Cohen, who was involved with Kehillat Beijing and the Beijing Moishe House but died of suicide upon his return to the United States. The news sent shockwaves across Beijing’s Jewish community, said Fenster.

In one of the Haggadah images, Fenster drew Michael seated with Roberta and other local leaders at a seder table.

Fenster originally wanted to print 600 copies of the book in Beijing. But now he will lead a seder in Taiwan and inaugurate the Haggadah in an online forum. He’ll wait for the seder next year to do a real celebratory launch in Beijing.

“This will be a soft inauguration,” he said. “I’m excited about the idea. It will be nice for people, wherever they are in the world.”