Saying Kaddish from balconies and fasting: How Hasidic Jews are responding to the coronavirus 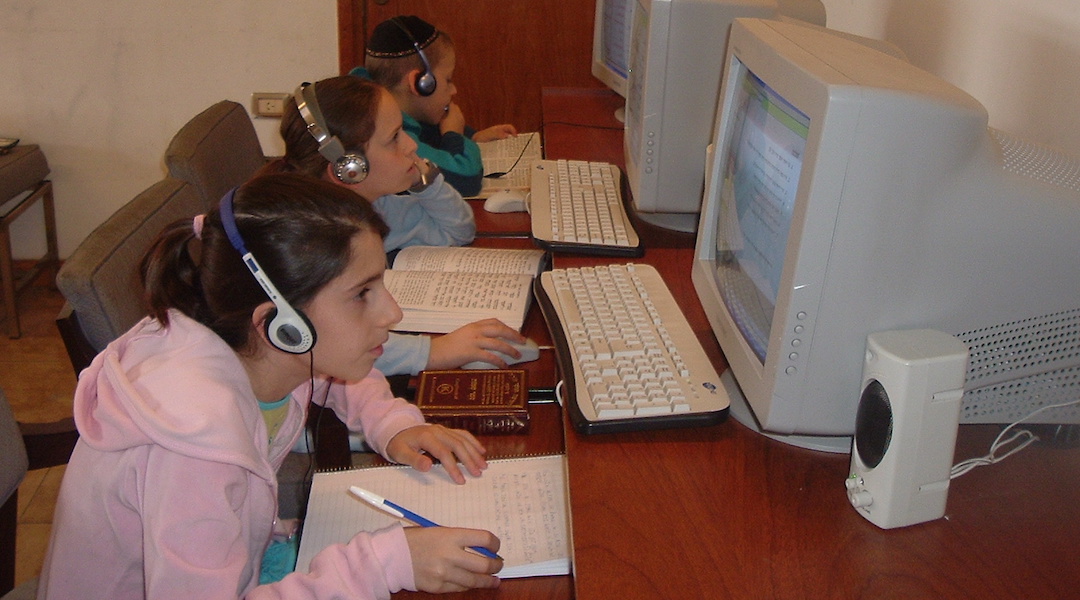 Chabad children in Argentina study in the movement's online school in 2007. During the new coronavirus outbreak, the school has offered guidance to other Jewish schools transitioning to remote learning. (Courtesy of the Nigri International Shluchim Online School)
Advertisement

NEW YORK (JTA) — One of Avi Webb’s favorite times of the week is Sunday morning, when he takes his children to morning prayers at his synagogue and stays for a lesson on Hasidic thought. His kids play at an arts and crafts table while he studies.

Webb is usually at synagogue three times a day for prayers. On Shabbat mornings, when more than 100 worshippers pile into the sanctuary to pray, he serves as gabbai, one of the volunteer organizers of the service.

That all stopped this week.

Instead of praying in synagogue, Webb stuck his head out a window to hear the Mourner’s Kaddish, shouting “amen” as the prayer echoed down the streets of the Brooklyn neighborhood of Crown Heights. Instead of a crowded Shabbat service, the synagogue limited the main morning prayers to just 40 people — one for each of the room’s long tables. And instead of his Sunday morning lesson at the synagogue, Webb tuned in via video chat as his kids played nearby.

Orthodox Jews normally consider themselves commanded by God to do all these things. But this week, Webb said, the commandment was not to do them.

“It’s the recognition that this is the mitzvah,” he said, using the Hebrew term for commandment. “I think that is, to me, very comforting. It’s not that I have to either lose out on it or drop it. This is the mitzvah today.”

As in much of the world, the coronavirus outbreak has disrupted patterns of life for Hasidic Jews. But Hasidic life is particularly communal, and social distancing has been an especially stark adjustment.

Many men pray in groups of at least 10 three times a day. Classes are always on offer. Weddings routinely draw hundreds of guests who dance arm in arm.

Reluctant to give up on such mainstays, many haredi (or ultra-Orthodox) communities in New York were slower to adopt new social distancing measures than the rest of the city. After news broke on Monday that 100 people in the heavily ultra-Orthodox Borough Park neighborhood had tested positive for the virus, haredi institutions began to close en masse.

The hub of the Chabad Hasidic community at 770 Eastern Parkway in Crown Heights closed only on Tuesday night. For many haredi children, Wednesday was the first day off from school — four days after New York City announced that it would shutter its public schools. As photos and video of large haredi social gatherings circulated online, the community’s leaders issued public pleas to stop.

On Wednesday, the Moetzes Gedolei HaTorah of America, a body of leading haredi rabbis, called on constituents not to leave home — including for prayers — and to conduct a half-day fast on Thursday and “to pray for mercy and favor for the entire Jewish nation and the entire world who are now in distress.”

Leaders of the Satmar Hasidic community in the New York state village of Kiryas Joel likewise announced on Thursday that all synagogues, schools and ritual baths would be closed — an unprecedented restriction. On Wednesday, leading Satmar rabbis from across New York declared that those over 60, and anyone with a health condition, are exempt from public prayer and immersing in ritual baths, or mikvahs. In New Square, a New York town populated by the Skverer Hasidic movement, a cantor took to a town public address system to lead daily prayers remotely.

CORONA LIFE HACK
This morning, in the Village of New Square: The synagogue remains shut, but a cantor has been granted entry to lead the morning prayers through a centrally-located sound system. Meanwhile, congregants pray along from the comfort of their own homes. pic.twitter.com/5oI9VSt6bU

In Israel, the Sephardic chief rabbi, Yitzchak Yosef, issued an order this week for followers to leave their phones on during Shabbat in order to receive test results or notifications regarding the coronavirus. Orthodox Jews are prohibited from using electronic devices on the Sabbath, though that restriction is waived in life-or-death situations.

“This is a tragedy for the Jewish nation,” said Rabbi Shea Ryback, an educator in the heavily haredi city of Lakewood, New Jersey. “This has got to be one of the first times in a long time that our children weren’t able to go to school. It’s a time that God is giving us a challenge to overcome.”

For some haredim, the closures of schools and synagogues recall historical traumas from Eastern Europe, when governments persecuted Jewish communities and shuttered their institutions, forcing them to practice Judaism clandestinely. The difference this time, of course, is that the closures are being done willingly.

“It’s surreal,” said Rabbi Berel Majesky, who lives in Crown Heights. “My grandparents are Russian and during communism, they would literally crawl out to go to a minyan. And here we’re doing the exact opposite. Here we’re living in the freest country in the world, where Jews have the greatest freedom in history, probably, and we’re choosing not to go to shul.”

Majesky is particularly concerned for the special needs children in his community. As directors of the local chapter of Friendship Circle, a Chabad-run organization that serves those with special needs, Majesky and his wife, Chani, coordinate 300 volunteers who visit the group’s clients once a week.

Now those visits are happening virtually, which Majesky says is no substitute for in-person interaction. He also worries that children with special needs who have been attending school will see their progress evaporate now that classes are canceled.

“That’s all going down the drain,” he said. “So the panic is not just kids being bored. Now it’s literally months and months of work of medical professionals, put into kids, that’s going down the drain. And the emotional toll it’s taking on families is tremendous.”

Remote education is also harder for some haredi communities that are wary of unfettered internet use. Torah Umesorah, an association of hundreds of mostly haredi schools, offered guidelines for teachers on how to conduct remote learning via telephone conference as well as internet video chat. A note from its board instructs “all those who use the internet to do so only with a filter in place.”

The Orthodox Union, an umbrella organization for American Orthodox Jews, has lobbied state governments to provide emergency funding for technology and remote learning for private as well as public school students during the current closures.

“We’ve heard from schools that never in their wildest dreams thought about doing remote learning that are now saying, ‘How do we get our kids laptops?’” said Maury Litwack, executive director of the O.U.’s Teach Coalition, which is pushing for the government funding.

One Hasidic school is ahead of the curve. The Nigri International Shluchim Online School, which was founded to provide remote education to children of Chabad emissaries in far-flung places, has been conducting classes online since 2006. It now has approximately 1,000 students — and has seen its student body grow 10 percent in recent days as other schools have closed.

Nigri is providing guidance to other schools that are now moving instruction online.

“The biggest concern is how to engage the students,” said Devora Leah Notik, the school’s associate director. “With the younger ones, how do they engage? How do you keep students involved in the lessons? One of the basic, basic things is encouraging the students to get up from the computer.”

Several people who spoke to the Jewish Telegraphic Agency noted that a touchstone of Hasidic thought is to keep a positive attitude in trying times. Voluntarily closing communal institutions may be unusual; persevering through tragedy is not.

“This is new for our lifetime, but this is not new for our history,” Webb said. “Jewish people have maintained not only dignity as people but this kind of focus that, come what may, we’re here for a specific reason, and here to serve our creator. And the way to do that is to serve each other and to help each other and to listen.”