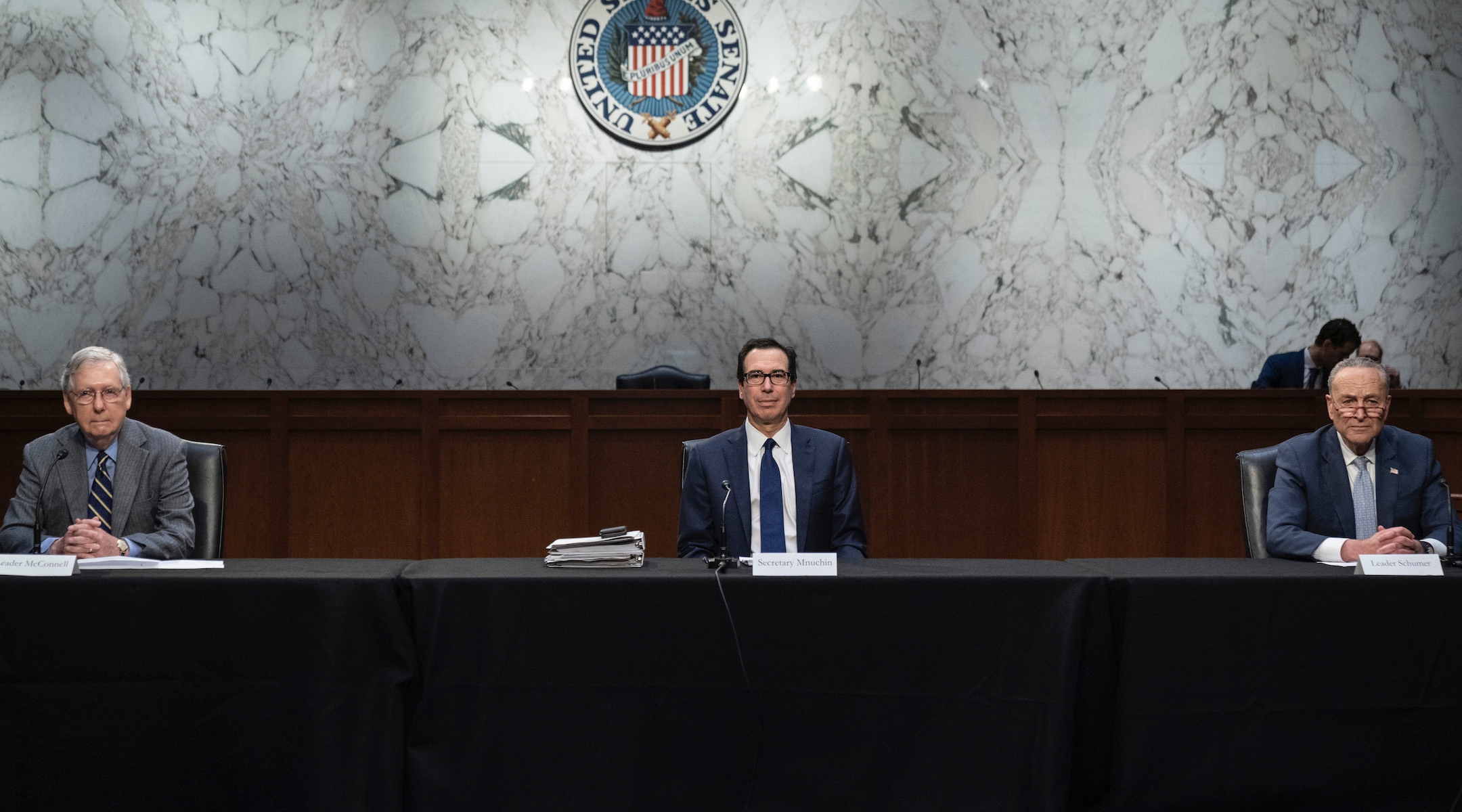 WASHINGTON (JTA) — The White House has come to an agreement with Democrats and Republicans on a $2 trillion stimulus package, the biggest in U.S. history, in response to the major economic downturn triggered by the coronavirus.

The Senate approved the package, 96-0, at midnight Wednesday. It could undergo changes before the U.S. House of Representatives vote expected Thursday.

But the broad outlines are known: Money will flow to workers suddenly unemployed, businesses large and small, and a medical infrastructure poised to be overwhelmed by the spread of COVID-19.

Jewish organizations are lobbying for a piece of the pie and to influence the bill’s final language.

The devil is in the details, and the Jewish Telegraphic Agency spoke to a range of Jewish community professionals who were scrambling to get their hands on copies of the measure and were speaking with its drafters.

Here’s a look at what they expect:

Jewish nonprofits already are feeling the crunch of the coronavirus-induced spending slowdown. The threat of an extended quarantine would inhibit philanthropic giving and also dry up sources of income like tuition for religious schools and camps, said Eric Fingerhut, the Jewish Federations of North America president, and Stephan Kline, the umbrella body’s associate vice president for public policy.

Jewish Federations has asked its members to press their local lawmakers for provisions that would assist nonprofits. Fingerhut and Kline said they welcomed news that funding for nonprofits would likely be included among the loans to businesses amounting to hundreds of billions of dollars, but they also expressed concern about two possible exemptions.

Under one, loans would not be available to agencies already eligible for assistance through Medicaid, the health care program for the impoverished that has been a critical revenue source for Jewish agencies that administer to the poor and the elderly.

Also, nonprofits employing more than 500 people will not be eligible for the loans under the bill language they had seen. That could exclude some of the larger Jewish community centers and camps, among others. Plus, they said, what constitutes an “employee” is not clearly defined, which could allow government officials to count seasonal workers or temporary workers.

“That would exclude JCCs that have lots of preschools and adjunct staff,” Fingerhut said.

Jewish Federations has joined with over 100 other nonprofits, including about half a dozen Jewish groups, in pressing for a dedicated $60 billion cash infusion into the nonprofit sector to preserve jobs, as the bill is said to direct to other sectors.

“Just as they have for airlines and other industries — it’s certainly as urgent as any of those major other industries,” Fingerhut said. (One estimate says airlines would get a $46 billion infusion, by comparison.)

Fingerhut said it was critical to have trained nonprofit professionals in place once the pandemic has passed in order to transition back to normalcy.

“If you lose your leadership teams and operating teams, and lose people maintaining facilities and they dissipate or can’t regroup, you lose your operating ability,” he said.

The nonprofits also are asking that taxpayers be allowed to deduct more charitable donations from their federal income tax burden, as they could until the 2017 reforms. The bill is set to restore the line item, but only up to $300.

The coalition is asking for the change to happen in time for 2019 tax filing, which has been extended to July 15.

“Tweaking it to include 2019 would encourage immediate contributions,” said Eric Fusfield, the director of legislative affairs at B’nai B’rith International. The group maintains a network of homes for the elderly.

Lobbying for the provisions will likely continue beyond the passage of the current stimulus. On Wednesday, Jewish Federations announced that it was working with seven other major Jewish organizations to coordinate pandemic policy. Among the four policy items was a unified advocacy and lobbying effort.

“We appreciate that the Jewish day schools in our community will be able to receive financial support in these very challenging times,” Diament said.

No funding for food security

MAZON: A Jewish Response to Hunger and the National Council of Jewish Women have joined in pressing Congress through petitions and lobbying to expand the Supplemental Nutrition Assistance Program, or SNAP, formerly known as food stamps.

Abby Leibman, MAZON’s president, said she understood from congressional contacts that the SNAP expansion did not make the final cut. She called it devastating.

Abortion and the Violence Against Women Act

The National Council of Jewish Women and other feminist organizations have been pushing for the 1994 Violence Against Women Act to be reinstated since it lapsed last year. The act dedicated funding to prosecuting and preventing domestic violence.

NCJW says violence is likely to intensify while families are confined to close quarters and unemployment increases.

“The current COVID-19 crisis is making it even more difficult for survivors of domestic violence to seek help,” an NCJW talking points sheet says.

Meanwhile, some right-wing lawmakers want to make sure stimulus spending does not go to pay for abortions. Those provisions likely won’t be included.

Ohio and Texas have classified abortions as “nonessential” medical procedures during the pandemic, which could delay abortions for women who need them immediately, said NCJW CEO Sheila Katz.

The organization’s state chapters are reporting that other Republican-dominated state governments are poising to do the same.

Support for voting by mail

Some state primaries have already been delayed because of the pandemic, and there are concerns about limitations on mail-in voting ahead of the Nov. 3 general elections. The Anti-Defamation League has joined with an alliance of civil rights groups asking for $2 billion to facilitate voting by mail and expand early voting and online registration.

Michael Lieberman, ADL’s Washington counsel, said it looks like the funding will be $400 million.

That’s “inadequate,” he said, “but an important recognition of the need and a start towards what is actually needed.”

“We’re not separate. There will be Jewish people who get fired, Jewish small businesses who will go under, Jewish elderly, Jewish people with disabilities,” Pesner said. “This is about the Jewish community and about the other. There’s no dichotomy.”

That accounts for RAC’s lengthy action alert to synagogues urging advocacy for relief for laid-off workers, protections for first responders and expanded screening for the virus, as well as funding for nonprofits.

Pesner recalled a Hasidic reading that said God dictated that the Israelites wander the desert for 40 years because the robust among them neglected the stragglers.

“We must empower governments and society to put the most vulnerable at the center,” he said.