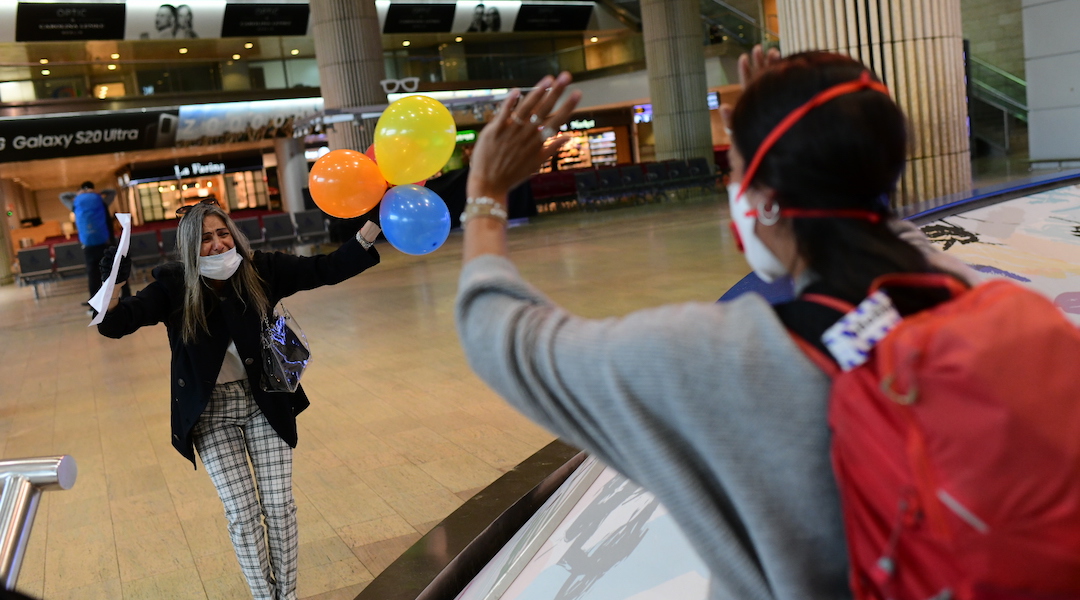 JERUSALEM (JTA) — Aviva Karoly, an attorney originally from Queens, New York, and her husband, Tzvi, were raised in religious Zionist homes and always dreamed of living in Israel.

In preparation, the couple had sent their 6-year old son Adi to a Hebrew-speaking preschool. They also put off purchasing a home in the United States with aliyah, or immigration to the Jewish state, on their minds.

After years of discussion and planning, they made the leap.

Unfortunately, their move coincided with the outbreak of the coronavirus.

“We didn’t know if the flight would go the day we were leaving,” Karoly said. “No one could tell us what to expect when we landed, if our insurance would be provided then, if transport would be provided from the airport. We were told to come up with backups and backups.”

The Karolys are far from alone.

According to the Jewish Agency, the nonprofit that encourages and promotes Diaspora ties and immigration to Israel, more than 800 new immigrants have arrived since the beginning of March, with another 200 expected before the start of the Passover holiday on April 8. The organization’s global call center has been fielding hundreds of calls a day, and while it is “operating in an emergency mode,” only about 100 new immigrants have canceled their plans, a spokesperson said.

As the novel coronavirus has spread across the globe, killing nearly 27,000 as of Friday, Israel has not been spared. Over the past several weeks, the government has imposed a series of increasingly severe social distancing regulations, culminating in a one-week ban on most Israelis traveling more than 100 meters — the length of a football field — away from their homes.

According to the Coronavirus National Information and Knowledge Center, a local consortium of researchers advising the Ministry of Health, 46.9% of Israelis who contracted the virus did so abroad. This reality has prompted the government to require all travelers entering the country to self-isolate for two weeks upon their return. That includes new immigrants like the Karolys.

“No one could tell us what to expect when we landed,” said Karoly, a 35-year old mother of two from New York’s heavily Jewish Crown Heights neighborhood. “I was freaked out. It was intimidating.” 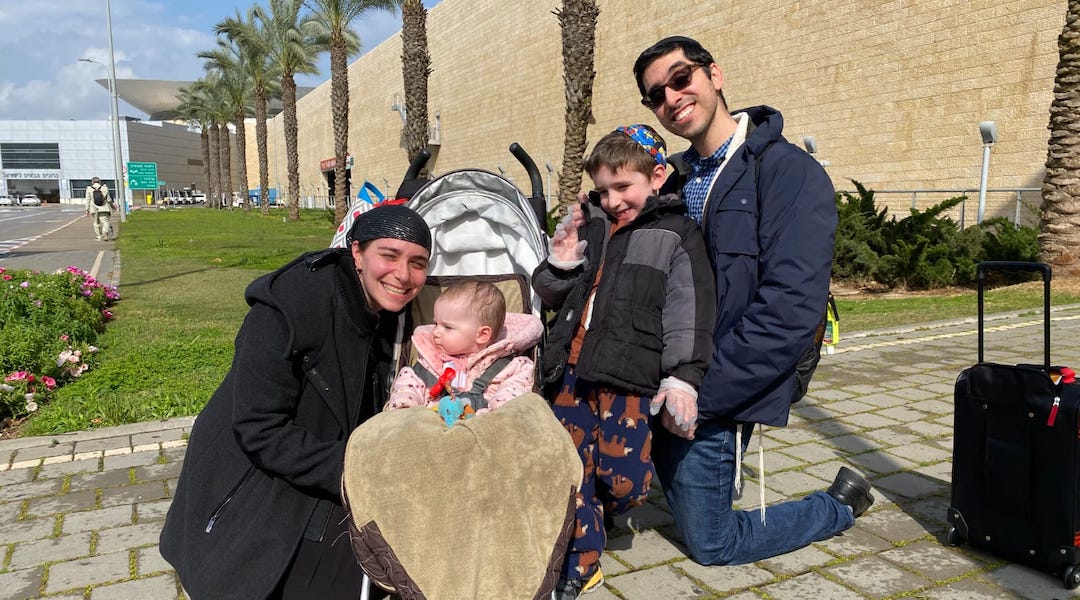 The Karoly family from New York City arrives in Israel. (Courtesy of the Karolys)

She was speaking Tuesday from quarantine in her new home in the central Israeli city of Modiin, where she was quickly escorted on arrival last week at Ben Gurion Airport near Tel Aviv.

“Aliyah has never been stopped under any emergency situation in the State of Israel,” the Jewish Agency spokesperson explained. “We’re not dissuading olim [immigrants] from coming now, but they need to know that the regulations are a bit different.”

In addition to the mandatory two-week self-quarantine, immigrants must sign a declaration that they have a place in which to isolate themselves.

Many newcomers who, like the Karolys, arrived through Nefesh B’Nefesh — an organization devoted to helping people immigrate to Israel and adjust to society there — already had apartments set up or relatives with whom to stay. Others, like a group of 72 Ethiopian immigrants who arrived on Tuesday, have been placed in a converted youth hostel outfitted for quarantine.

The Jewish Agency says that it checks on the isolated immigrants by phone on a daily basis. Likewise, Nefesh B’Nefesh, whose staff is now working remotely, has been checking up on its clients, making regular phone calls and even sending groceries to the homes of newcomers without a pre-existing support network.

“We are making sure everyone has their basic needs met,” said Nefesh B’Nefesh Executive Vice President Zev Gershinsky.

Nefesh B’Nefesh has placed its biggest focus on employment for the immigrants. As the government shuts down large segments of the Israeli economy, newcomers will find it more difficult to support themselves.

“We are doubling down on efforts to find more and more companies who are recruiting and push it out to our job board,” Gershinsky said.

While Karoly and her husband have been unable to receive their Israeli identification cards or open a bank account while in quarantine, their neighbors have been helpful in setting up their apartment. They are even doing grocery shopping for them, she said.

“Literal strangers helped with everything, even towels and hangers. Our every need has been taken care of,” Karoly said. “My son is so excited to be here. We’ve been blessed with a private garden and he’s been outdoors 80% of the day playing with toys people keep dropping off. We will all go stir crazy, but for now it’s an exciting experience.”

Miriam Yifrach, 23, a returning citizen who made aliyah from Boston last week after finishing a master’s degree, said her arrival in Israel was a surreal experience.

“I got to the airport and everyone was in masks and there were no lines,” she recalled.

Yifrach was unable to take care of most of the usual aliyah logistics that many immigrants handle at the airport with the help of groups like Nefesh B’Nefesh. Instead, she was sent straight from Ben Gurion to her temporary rental apartment in Jerusalem.

Her brother, who is currently serving in the Israeli army, sent her a spare SIM card and his credit card number so she could have internet access (she’s producing a vlog) and order food. Otherwise nothing is ready.

“I’m like this cat that wandered in. I have this passport but that’s it,” Yifrach said. “It’s a little crazy having groceries delivered and going between the same two rooms and a garden, but I have no regrets. Definitely not.” 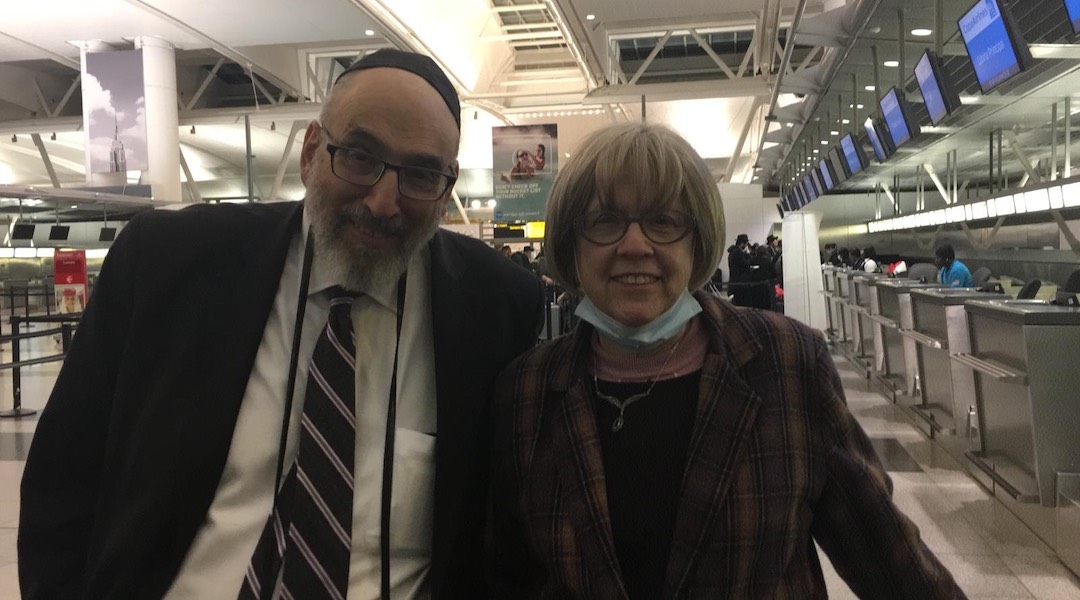 Joel and Tsipporah Adelman are shown before their flight to Israel, where they admit they are going a bit “stir crazy” in quarantine. (Courtesy of the Adelmans)

Another couple that made aliyah last week were Joel and Tsipporah Adelman of Huntington, New York, retirees who went straight into quarantine in the English-speaking Jerusalem suburb of Ramat Beit Shemesh Alef, where their son and his family reside.

“Things are bad worldwide, but this has been our goal and our dream for decades, so we came even though we knew that it wouldn’t be easy getting here. And it wasn’t,” said Joel Adelman, who spent years as a rabbi on Long Island. “There were questions if they would let us on the flight, and when we got to the airport it was deserted and nobody knew what to do.”

The couple acknowledge that they are going a bit “stir crazy,” but their son lives nearby and is bringing them groceries. Their daughter-in-law is cooking meals for them to be delivered as well.

To stave off boredom, Joel says he tries to learn Torah and Tsipporah says she has been reading a “never-ending supply of books.”

Despite the quarantine, Joel said, “we’re ecstatic to be here.”