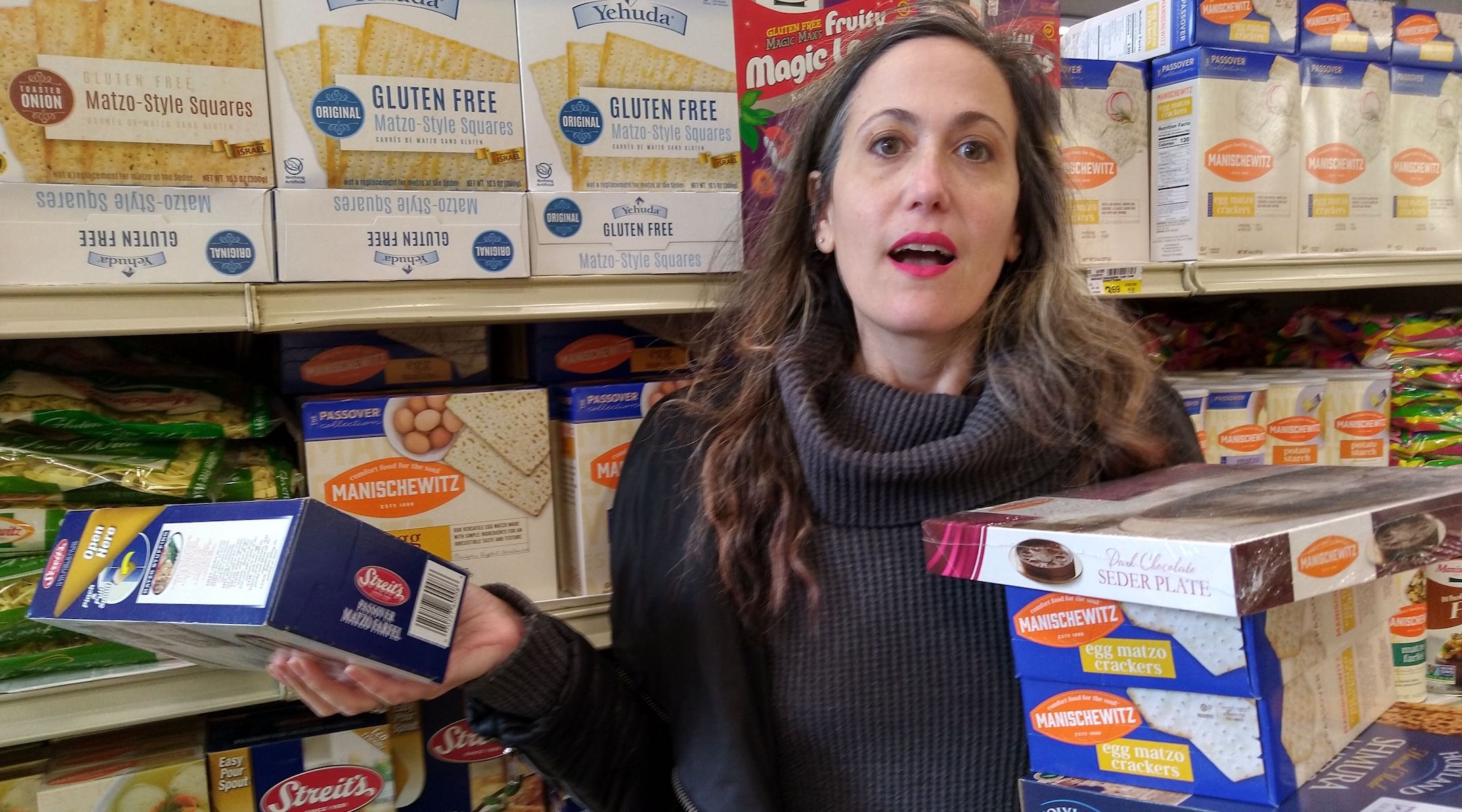 A very overwhelmed Maya Mirsky in the Passover aisle at the grocery store. (Nina Lukacs)
Advertisement

(J. The Jewish News of Northern California) — How long does a seder really have to be? “No, we can’t just say ‘They tried to kill us, we survived, let’s eat!” I tell my daughters. There’s some negotiation until I promise it’ll be 10 minutes. I can get the essentials done in 10 minutes, right?

We are wrangling because, for the first time in my life, I am organizing a seder. Yes, this Gen X Jew has been to a lot of seders, but always as a guest — at my aunt’s in Los Angeles as a kid, at my oldest friend’s in Alameda as an adult. And sure, I’ve skipped seders, too, while living in Budapest.

But I’ve never actually hosted one.

It’s only as our newsroom continues to report on coronavirus and canceled community events that it dawned on me: This affects me, too. I can’t go to Alameda. What will I do?

The answer, of course, is that I’ll host my own seder. It’ll be just the four of us, two adults and two kids (children who find the Haggadah appallingly dull, apparently). I’m messaging with J.’s online editor, David, and he recommends we include in our seder a special showing of “Prince of Egypt,” the 1998 DreamWorks film that tells the story of Moses and the Exodus.

He is appalled to realize that I have never seen it and begins to send me admonitory messages in all caps, upset at my ignorance. Apparently this is another thing I know nothing about!

I have to admit that I’m suddenly feeling out of my depth.

“What is this?” I’m looking at something described as a solid chocolate seder plate on the Passover end cap at my local Safeway and wondering who thought combining a shankbone with chocolate was a good idea.

Unlike the toilet paper section, the Passover shelves are fully stocked with matzah imported from Jerusalem, dubiously packaged macaroons and a plastic matzah dish described as an “affordable alternative to elegant silver,” which I seriously consider investing in. I go through the necessities in my head and start to worry. I’ve been freeloading for too long — do I have to make my own gefilte fish?

Not if I live in the Bay Area, apparently. I can pick up rock-and-black-cod gefilte at Market Hall, where I can even get a lamb shank labeled gluten and dairy-free. Oakland Kosher Foods, meanwhile, has more packaged Pesach foods than you can shake a sprig of karpas at.

But it’s not about the cooking — not really.

It’s not about the fact that I don’t own an afikomen cover or a seder plate. It’s that I suddenly feel responsible for something that I’ve always taken for granted. I can do Pesach with homemade charoset, store-bought gefilte fish and a bone from my local butcher, with Val Kilmer saying “Let my people go!”

The point is getting it done, somehow.

This year, I’ve suddenly become responsible for the transmission of our oral history to my children. So be it. If this is the year I have to step up and be in charge, then so be it. Even if it’s only for 10 minutes.