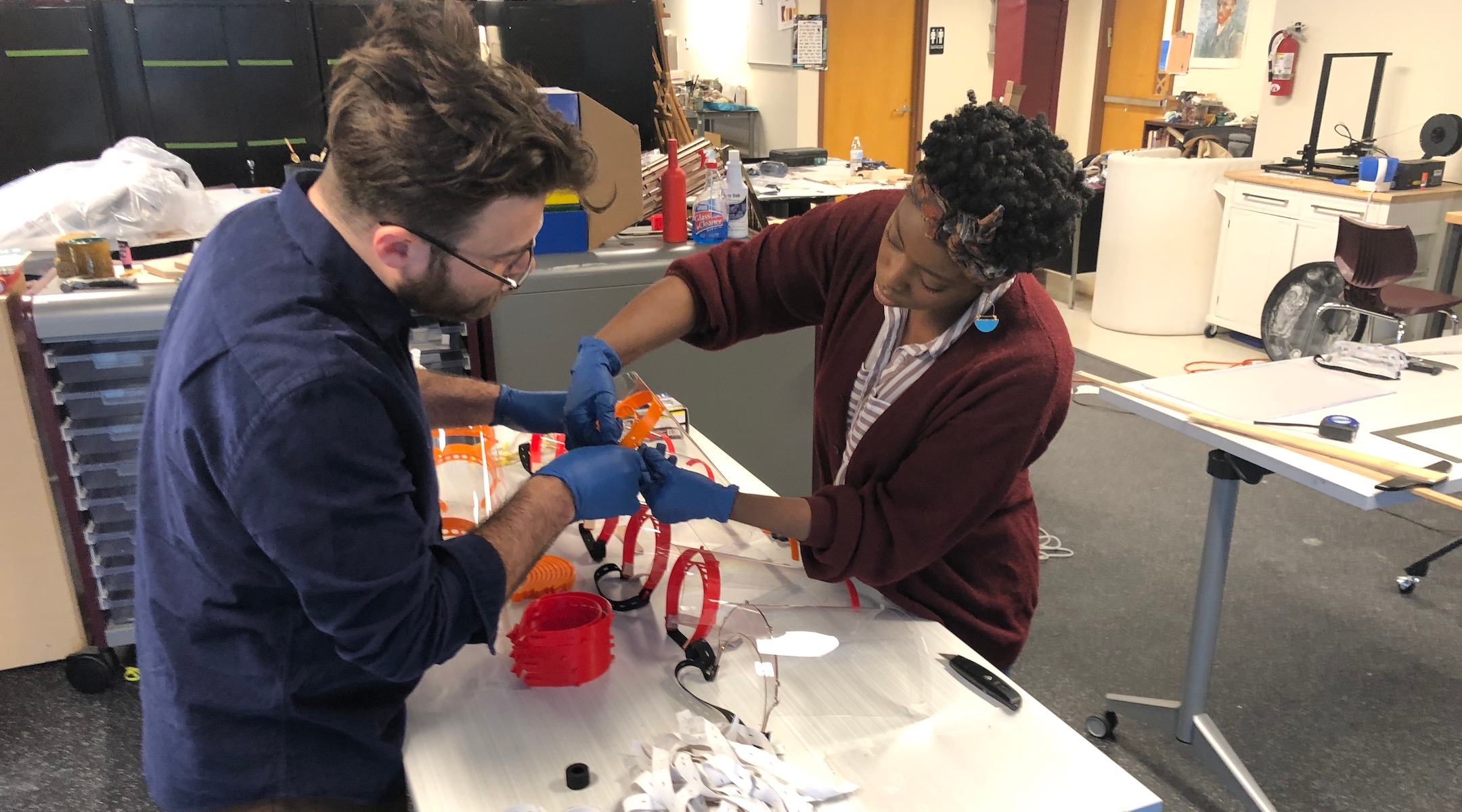 (JTA) — On a typical day, the art center at Kohelet Yeshiva High School in suburban Philadelphia is filled with students working on a range of projects — from making ceramic bowls on the pottery wheels to creating wooden sculptures. They use the 3-D printer and laser cutter to build parts for the robotics team.

But since the school went virtual more than two weeks ago, the 1,300-square-foot center has been used to make an entirely different project: face shields for medical professionals treating coronavirus patients.

Since starting production last week, the school in Merion Station has made about 200 shields for distribution to doctors and nurses in the community. Now it’s ramping up production to produce that many every day.

“The need is overwhelming. Every major hospital and minor hospital in this area has been reaching out,” said Rabbi Gil Perl, the head of the Modern Orthodox day school, which has 260 students.

A number of schools and other organizations across the country are attempting to alleviate the supply shortage. Some are sewing masks by hand or using sewing machines, while others, like Kohelet, are using more advanced technology.

A little over a week ago, Perl and the school’s art teacher, Daniel Ostrov, learned that other schools were using those same supplies to make lifesaving supplies. They quickly realized his school was well equipped to make face shields — a transparent acrylic that covers medical providers’ entire faces to protect against bacteria and viruses that can be present in droplets when patients cough or sneeze. The lab’s laser cutter could be used to cut the acrylic and 3-D printers could make straps to hold the shield together.

There was one problem: The shield required a certain type of elastic strip to go around the wearer’s head and local suppliers were running short. So Perl put out a call on social media. Within hours he had received responses from people who were offering up elastic they had at home — some went as far as cutting it out of their children’s clothing and cloth diapers.

“The response was stunning,” the rabbi said.

With all the materials in hand, Ostrov and wife Stephanie Cole, a graphic designer, were able to craft a prototype that was approved by a local hospital. On the night of March 24, Perl delivered the first batch of shields to parents of students who work as medical providers. The following day he dropped off shields at a local hospital. 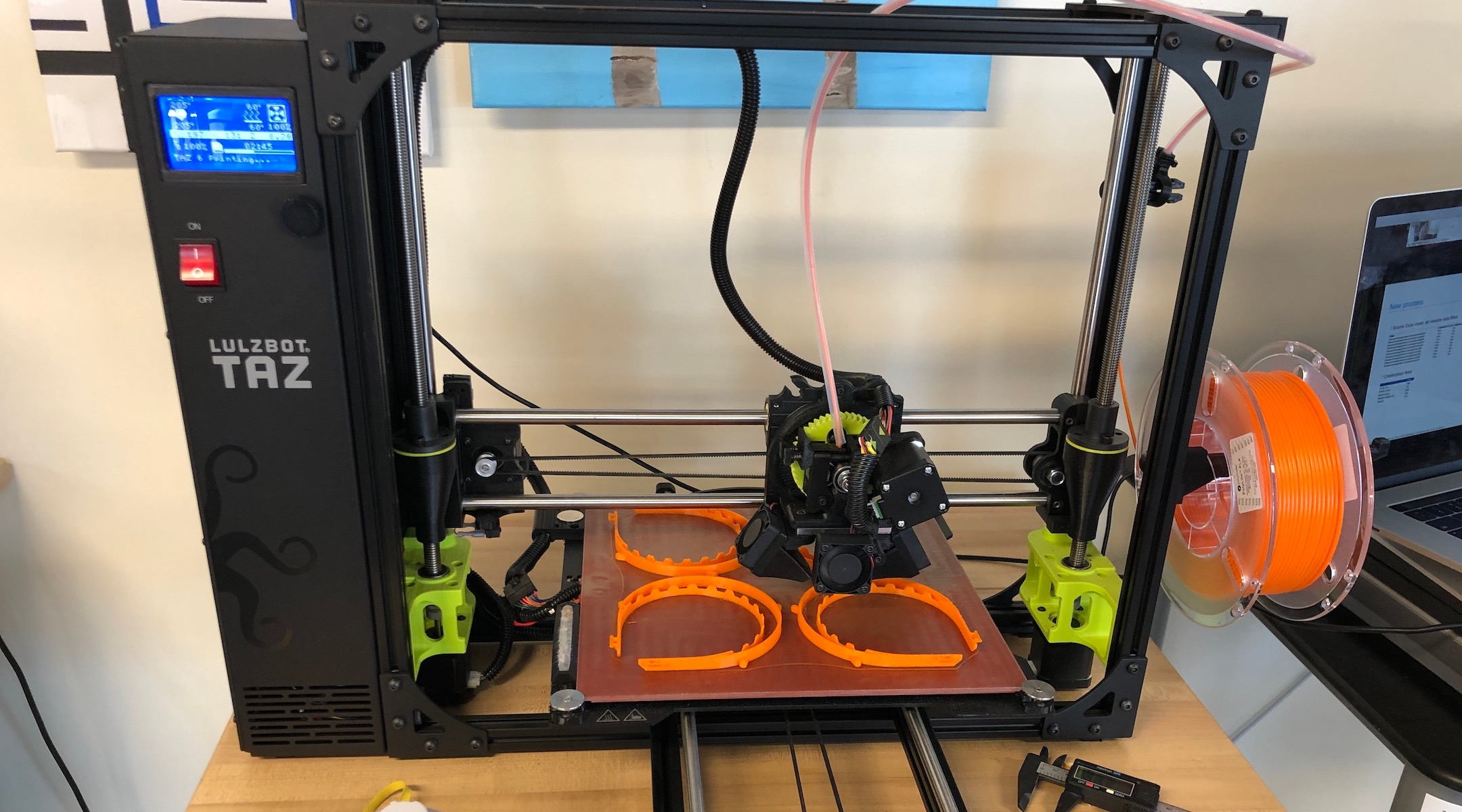 One of the school’s 3-D printers making straps for the face shields. (Kohelet Yeshiva High School)

The husband-wife duo, both of whom also work as artists, were able to make about 24 face shields a day using the method. But while the laser cutter could quickly trim the acrylic, production was being slowed down by using the 3-D printers, each of which takes six hours to print the straps for four shields. Ostrov and Cole realized that they could make the straps with a thicker acrylic that could be cut using the laser cutter.

On Friday, they started implementing the new production method, in addition to using the 3-D printers. After making some tweaks, Ostrov and Cole believe they will be able to make some 200 shields a day. 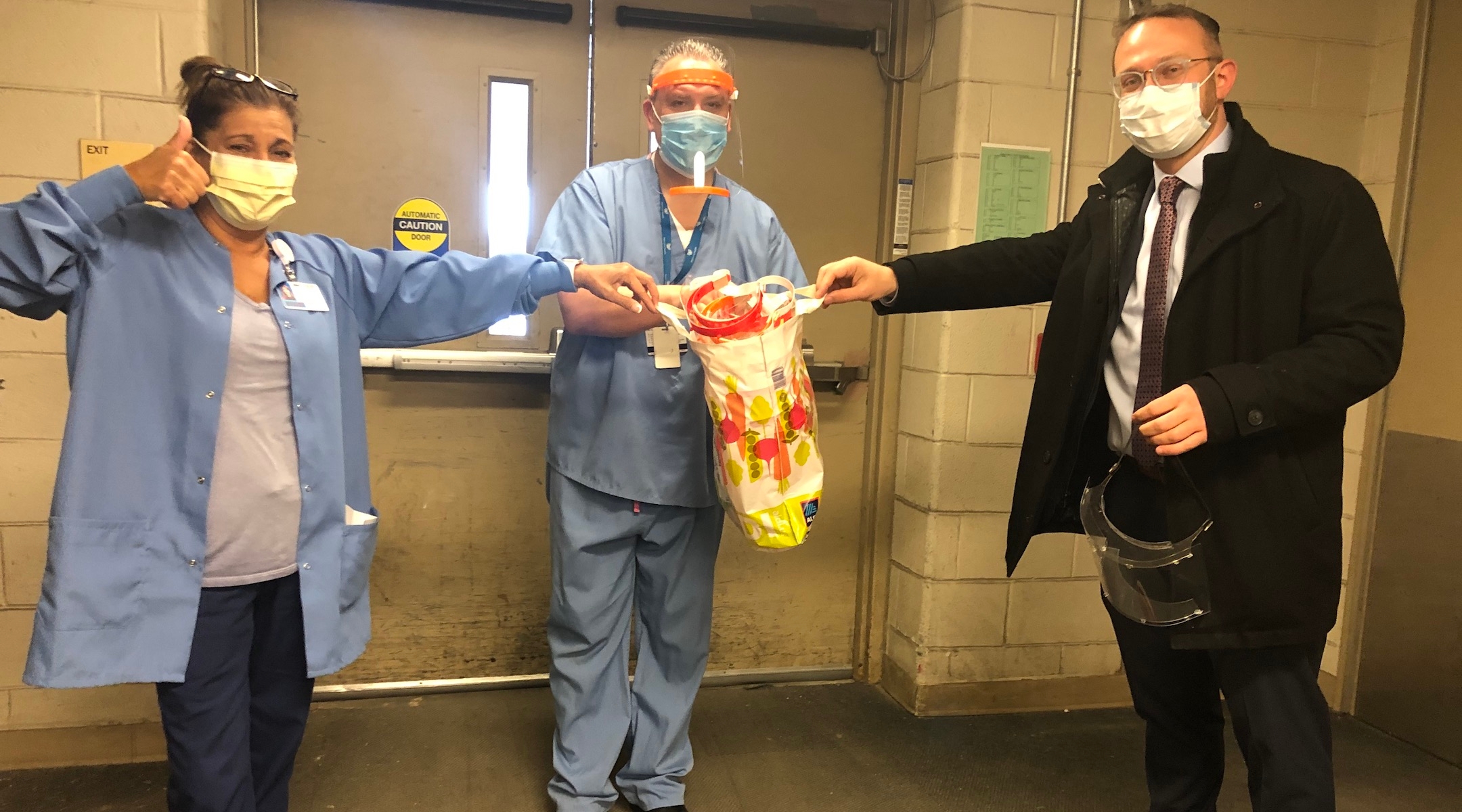 Rabbi Gil Perl delivers a batch of face shields to the Lankenau Medical Center in Wynnewood, Pa. (Courtesy of Kohelet)

The pair hasn’t taken a day off since they started on the project a little over a week ago. They’ve worked some days as much as 15 hours.

But they say seeing the responses from health care providers makes it all worth it.

“As tiring as our side is, what they’re doing is just so much beyond that because they’re really the ones putting their lives at danger,” Ostrov said.

The couple is constantly tweaking their design, which they are sharing online so others with similar tools can use it.

Kohelet Yeshiva has raised $10,000 online to fund the materials, which Perl says will be enough to make shields for another five weeks.

In speaking about his school’s work, the rabbi invoked the oft-cited Jewish teaching from the Mishnah: “You are not obligated to complete the work, but neither are you free to desist from it.”