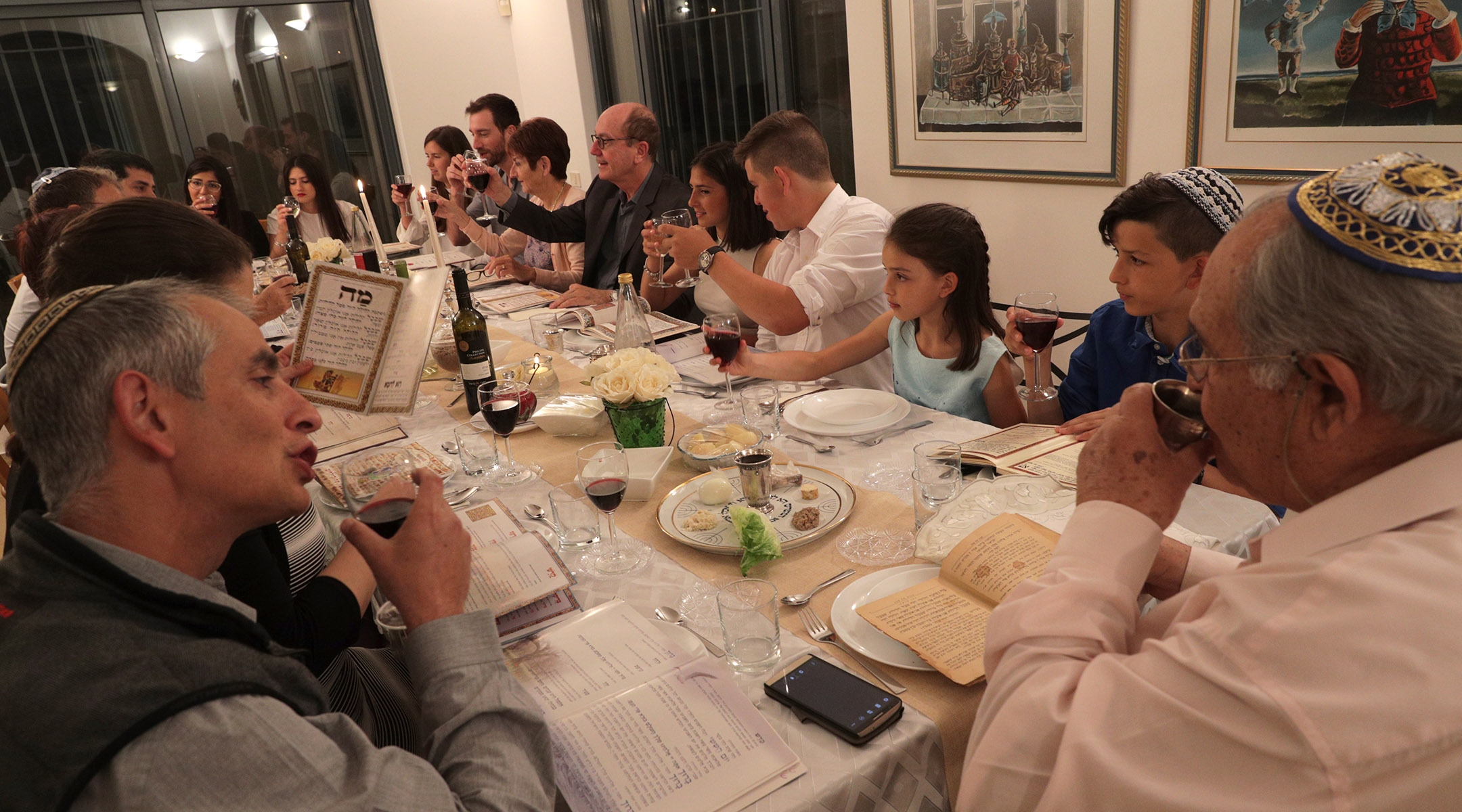 An Israeli family seen during the Passover seder on the first night of the eight-day holiday, April 10, 2017. (Nati Shohat/Flash 90)
Advertisement

“Everyone must plan to celebrate Pesach where they are currently,” reads the guidance issued Monday by a number of groups including the Orthodox Union. “Travel to other cities, or visits with family even within your city, should be cancelled. This applies to the entirety of Pesach.”

That marked a sharp change from the previous guidance, which said that Jews who would otherwise be alone for Passover meals could consider self-quarantining for two weeks before the holiday’s start, then joining a single local family for the festive meal if asymptomatic.

The reversal illuminates just how thoroughly the coronavirus has disrupted planning for Passover, the eight-day holiday that celebrates Jews’ exodus from slavery in ancient Egypt. The holiday begins with festive meals called seders that stretch into the night and are typically celebrated communally. But the pandemic has made that practice perilous, especially as the holiday coincides with a critical period for stopping the disease’s spread.

The new statement, which was signed by leaders of six groups — the Orthodox Union, the Agudath Israel of America, Igud HaRabbanim – Rabbinical Alliance of America, The Lakewood Vaad, National Council of Young Israel, Rabbinical Council of America — acknowledged the changing nature of the situation.

“We note that the situation continues to evolve, and under all circumstances nothing should be done that is not within the current guidance offered by local governments and health departments, as well as within the standards prescribed by communal rabbinic and medical leadership,” it read.

Indeed, public health experts say people should not leave their houses for seder — even if they quarantined for 14 days.

“It’s completely and utterly inappropriate for anyone to get together for Pesach,” said Dr. Joseph Vinetz, a professor of infectious diseases at Yale University. “Especially because certainly in New Rochelle and elsewhere it’s been the observant Jewish community doing its normal activity that seems to be the seed for spreading this throughout New York. The answer is absolutely not, no exceptions.”

Vinetz added that a two-week quarantine does not guarantee someone cannot transmit the virus.

“People have been shown to sometimes even be infectious for more than 14 days after exposure,” he said. 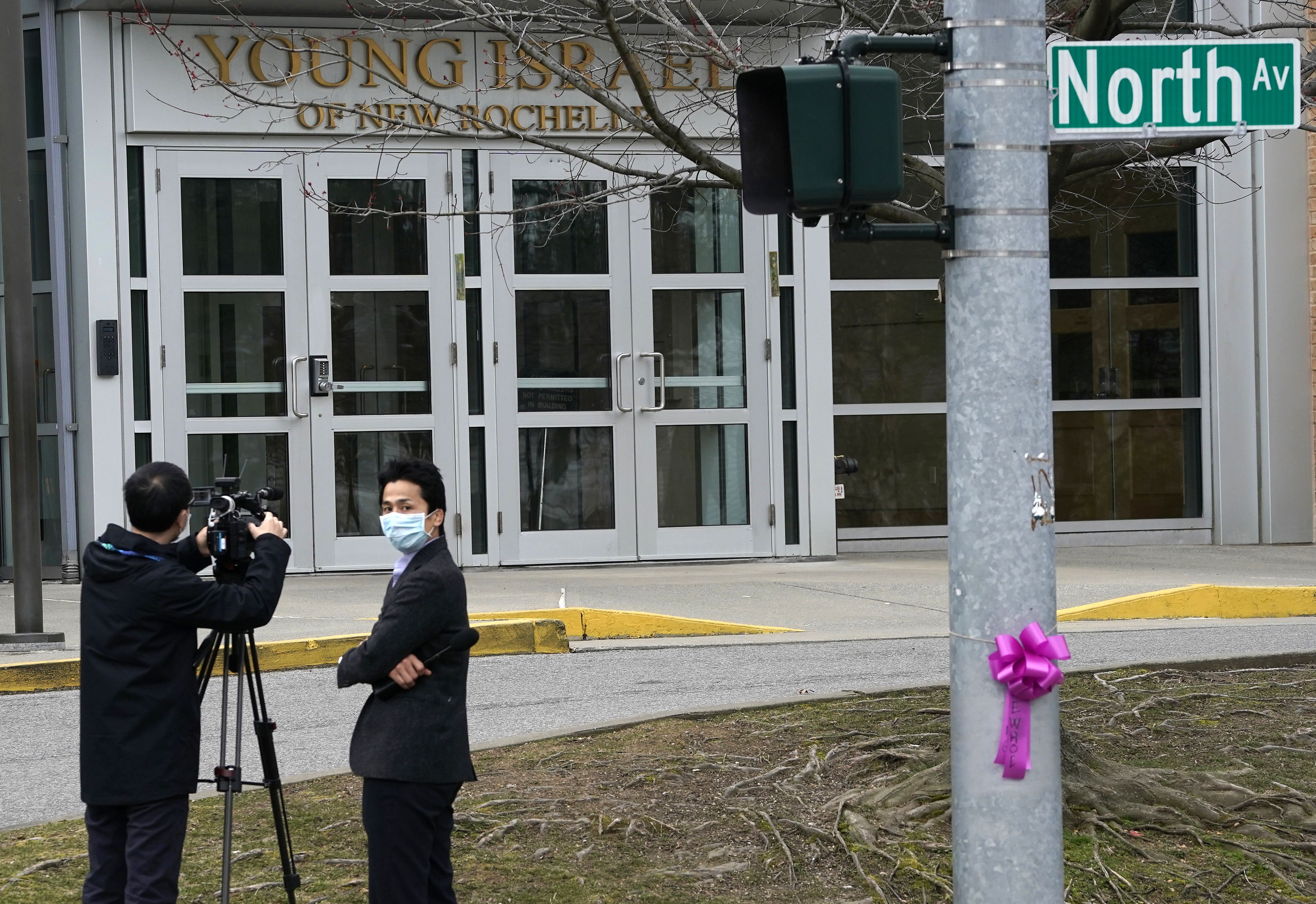 Members of the media wear protective masks film outside the Young Israel of New Rochelle, a suburban New York town at the center of a coronavirus outbreak in Westchester County, March 10, 2020. (Timothy A. Clary/AFP via Getty Images)

Caroline Morganti had the two-week time horizon in mind when she first started making her Passover plans. As soon as the coronavirus started spreading widely in the United States last month, the 25-year-old software engineer figured her seder dinners wouldn’t be the typical social gathering.

But until recently, Morganti, who lives alone, had considered going to a family close to her home in the Washington Heights neighborhood of Manhattan. To make that happen, she knew, she would have to isolate completely in her apartment for two weeks before the first night of the holiday.

Morganti ultimately set the idea aside. There were technical challenges: She couldn’t figure out how to gather food for both a two-week quarantine before the holiday, to ensure that she would not bring the virus to her hosts, and for the specialized diet that is required once Passover begins.

But perhaps more significantly, as more became known about the coronavirus, she decided she couldn’t accept even the limited risk of attending someone else’s seder.

“For a lot of people it’s very hard emotionally to think about spending Pesach, especially the seder alone, but I do think it’s still a risk,” Morganti said.

Even while the Orthodox groups’ guidance left open the possibility of some people joining others’ seders, many religious leaders had advised against the practice.

A letter signed by 10 Orthodox rabbis in Dallas says people should not be hosting seders for anyone not living in their house and goes as far as to say that those who pray together with other families, even if they adhere to social distancing, “will not be welcome in our shuls once we return to them, may it be soon.”

Forty-three Orthodox rabbis in the greater Washington, D.C., area signed a letter saying no one should have a seder with someone who does not live in their house, while a letter signed by four rabbis in Lakewood, New Jersey, urged community members to stay home.

The Agudath Israel of America, one of the signatories on the original statement, released a video last week that urged people to celebrate Passover at home.

Israel went the farthest of all on Monday night, issuing a lockdown order for the entire country that makes leaving one’s home on the first night of Passover a criminal offense.

For Orthodox Jews in America, not being able to join a seder means three days of solitude. They do not turn on and off electricity, cook or use their phones for the first and last two days of the Passover holiday. This year, the holiday starts just two days before Shabbat, which means that those prohibitions are extended for another day without break. (In Israel, the holiday and Shabbat are separated by a day when normal activity is permitted.)

A Yeshiva University student wears a face mask on the grounds of the university in New York City, on March 4, 2020. (David Dee Delgado/Getty Images)

For Elliot, another Washington Heights resident who asked to be identified only by his first name because he was concerned about how his plans would be perceived, spending his seder alone “was out of the question.”

The 24-year-old Orthodox Jew was initially supposed to travel to see his 62-year-old mother in Maryland but did not want to put her at risk. Instead he opted instead to visit his sister and her family in Tennessee. He arrived two weeks before Passover and is spending that time socially distancing from the family so they can be together for the seders.

“I feel like the psychological impact also needs to be taken into account,” he said. “Not just people who have clinical depression, but just in general it can be very hard for people to be on their own.”

Some Orthodox authorities have acknowledged that concern, instructing followers to use the phone if they believe their life is imperiled by prolonged isolation.

Stephen Buka, a professor of epidemiology at Brown University, said someone visiting family for a seder “would be incurring some risk” of contracting the coronavirus and should self-quarantine for another two weeks after attending the seder to ensure they do not subsequently spread the disease further.

Morganti said she understood why the Orthodox authorities sought to create a path for people who live alone, even though public health concerns ultimately made that path unadvisable.

“I realize that they were doing this because it’s minimizing the risk while still trying to balance people’s desire for community or need for community,” she said. “But it is still a risk.”