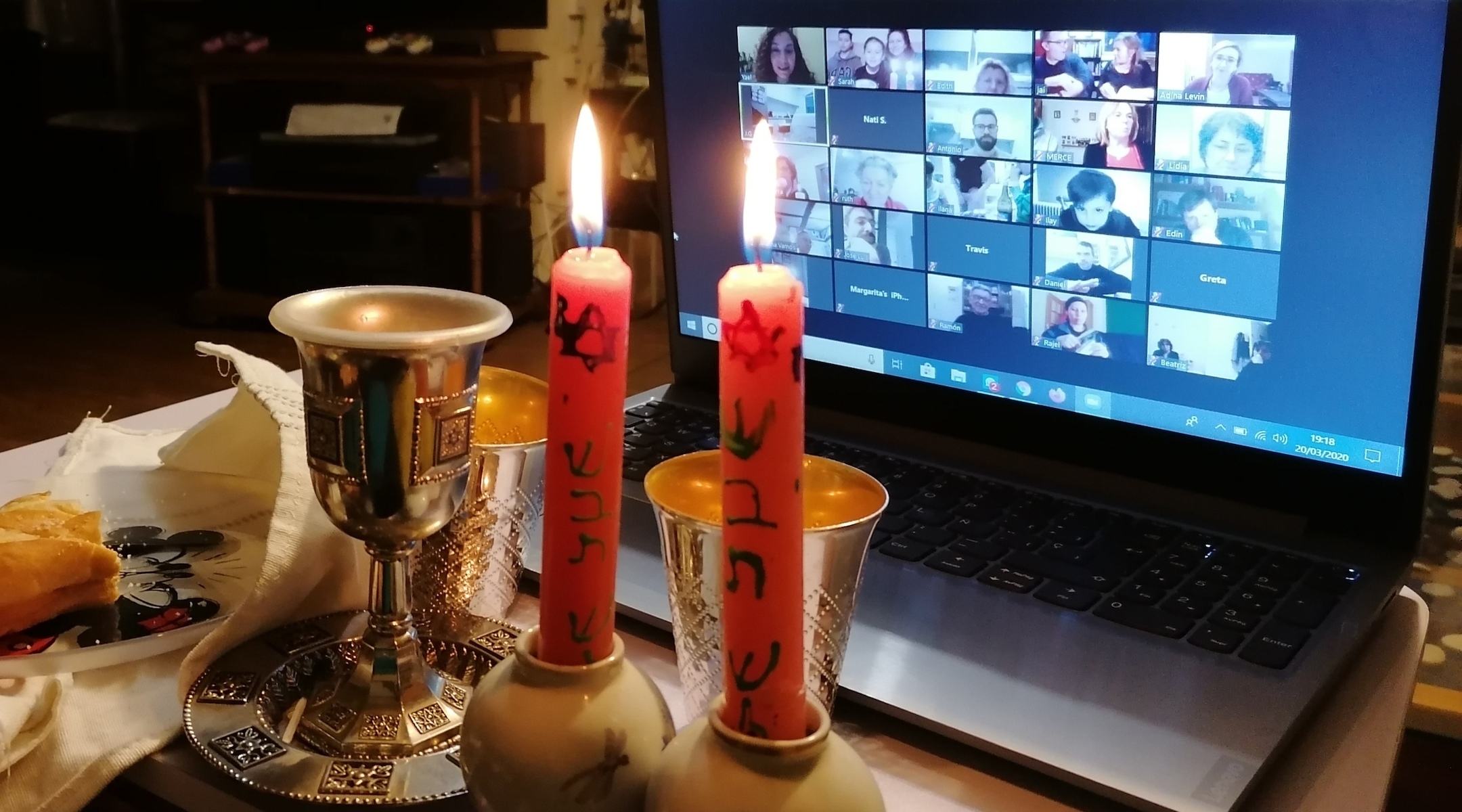 A Shabbat service featuring members of the Madrid and Barcelona Reform communities in April 2020, shortly after the onset of the COVID-19 pandemic. (Sarah I. Gonzalez)
Advertisement

(JTA) — Before the coronavirus crisis, Fridays were busy at the house of Yael Cobano, the founder and president of the Reform Jewish Community of Madrid.

She’d confirm the names of members who could light the candles for Friday night services, choose someone to say the kiddush and hamotzi, and prepare her own dish to share at the post-Kabbalat Shabbat potluck, which usually drew 10 to 20 people from the community of about 65.

These days, the preparation and services take place online — and in coordination with Barcelona’s Bet Shalom, Madrid’s sister congregation.

When the rapid spread of the COVID-19 pandemic through Spain forced a countrywide lockdown, the two largest Reform congregations in the country came together to create something they never envisioned — a large active virtual community.

“I didn’t think it possible to live your Jewish life only online,” Cobano said. “For me Judaism is face to face, the word ‘knesset’ means gathering – physical and not from behind the computer. However, through our joining together I was able to see the bonds, the good that a virtual community could offer during this pandemic.”

Jewish religious life is Spain is dominated by traditional Orthodox communities, and Cobano’s community dates back only to 2014. While many in the Orthodox world shun the combination of religion and technology, the Reform groups have embraced it.

Using a virtual conference platform, the two Reform communities first joined forces for Purim. Then they started doing Shabbat services together. Now they have a robust schedule of weekly programming that involves lectures, workshops and discussions led by past and current community members and international friends, including prominent rabbis, professors and more.

Cobano’s own COVID-19 symptoms had already started during Purim, in early March. She felt exhausted, achy, unable to sleep and was beginning to have trouble breathing.

“It was very difficult,” said Cobano, a 38-year-old civil servant. But together with Jai Anguita, the president of Barcelona’s Bet Shalom, they pressed ahead.

“A community leadership is a commitment,” said Anguita, a 59-year-old lawyer. “During difficult times, one has to move forward and lead with optimism and solidarity.”

Three other Madrid community members have had serious cases of COVID-19, one of them an ER doctor. Many others, like Cobano, have been ill and recovered at home. Madrid’s congregation has a special WhatsApp group dedicated to twice-daily prayers for the sick and for medical personnel. On Saturday nights, the two communities connect for the Havdalah prayer marking the end of Shabbat.

Holding programs online and together wasn’t an entirely foreign concept for the two communities. Before the start of the pandemic, they had already hosted some Israel-focused programming and a virtual book club together. But their efforts now are much larger.

“When the evening comes we have our Jewish time,” Cobano said. “To study, to sing, to exercise – whatever it is – and we see each other.” 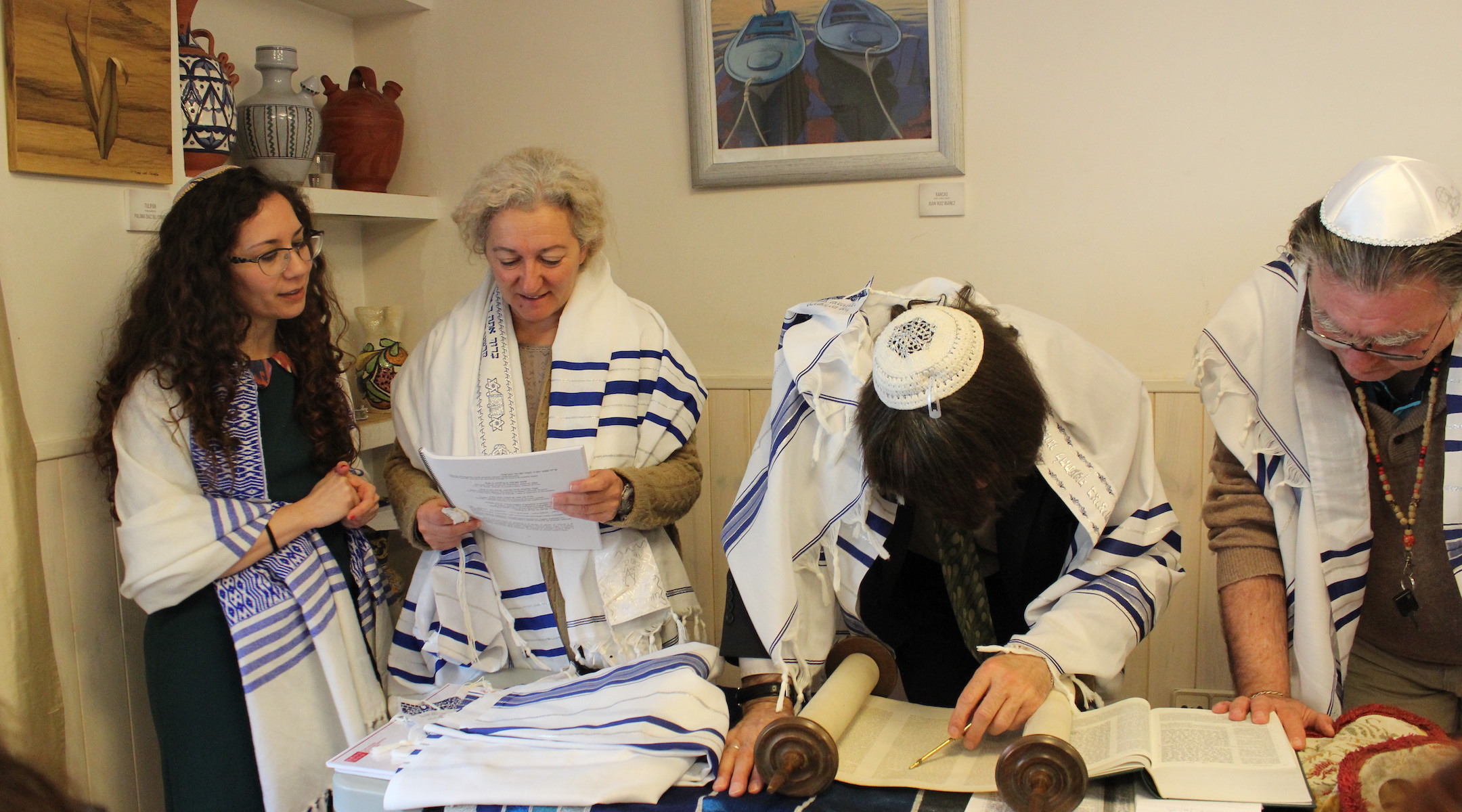 They’ve hosted discussions on the history of anti-Semitism, offered concerts of Jewish music and held classes of Jai Yoga. Susannah Heschel, the Eli Black Professor of Jewish Studies at Dartmouth College, spoke about how intimacy is presented in Jewish commentaries to address the longing many might feel for human contact during isolation.

The centuries-old question of “Why is God doing this to me?” was the focus of the discussion led by Rabbi Ariel Edery, a faculty member of the Iberoamerican Institute for Reform Rabbinical Formation and the rabbi at the Beth Shalom congregation of Wake County, North Carolina.

“These presentations help people confront and accept the situation they’re living,” Cobano said. “Accepting helps empower [them] for the future.”

That future is still unclear.

Spain has the second highest number of COVID-19 deaths and infections in Europe after Italy and recently tightened its national lockdown, ordering all non-essential workers to stay home for at least two more weeks. Anguita and Cobano plan with this grim reality in mind: They expect their online schedule to extend well into June and welcome help from the larger Jewish community.

“If someone out there can offer some kind of presentation or a mini-concert or a workshop, our doors and windows are open,” Anguita said.

For members of both congregations, the online activities spearheaded by Anguita and Cobano have been a relief.

“[They] make us feel close even though we’re distanced,” Sarah I. Gonzales of the Madrid community said in an email. “They [help] generate a place of unity and compassion so that the loneliness [is] more bearable and they give our children life and happiness.”

Edith Gladis Dueñas of the Barcelona community concurred, adding that it’s been helpful to fill her schedule with the Jewish-themed events.

“Cobano and Anguita’s efforts are extraordinary, [full] of ingenuity and imagination,” she said. “They help me pass the days with friends.”

For Passover, both congregations would normally host large communitywide seders. This week, however, the members will band together to help people celebrate on their own. Cobano gave a presentation on how to lead a seder; Maria Manzanares filmed a video on making homemade matzah; Romina Reisin, an Israel-based cantor, taught Passover-themed songs in a music workshop; and Sara Gardner, who edited “The Rosh Hashanah Seder Cookbook: Stories & Recipes From the Reform Jewish Community of Madrid,” shared Passover recipes.

While the endeavor to keep the virtual congregation active often transcends borders and timelines, the Madrid and Barcelona communities each also remain active locally. Members have joined relief efforts in their cities and towns – they deliver food to the homebound, volunteer to check in with seniors who live alone and contribute to a fund established for those who have lost their jobs.

A crisis management group has been organized by the wider Jewish community of Madrid, with mental health professionals offering their support.

“There has been a great brotherhood no matter the denomination,” Cobano said. “It makes my heart happy, it’s Klal Israel, we’re all one.”

Until the situation changes and the communities can again come together in their respective places of worship, logging in will be the next best thing.

“We start [every session] with ‘Estáis bien? Como lo lleváis’ – we check in with each other,” said Cobano, “and it’s like that kiss or hug you give someone at the door of the synagogue.”