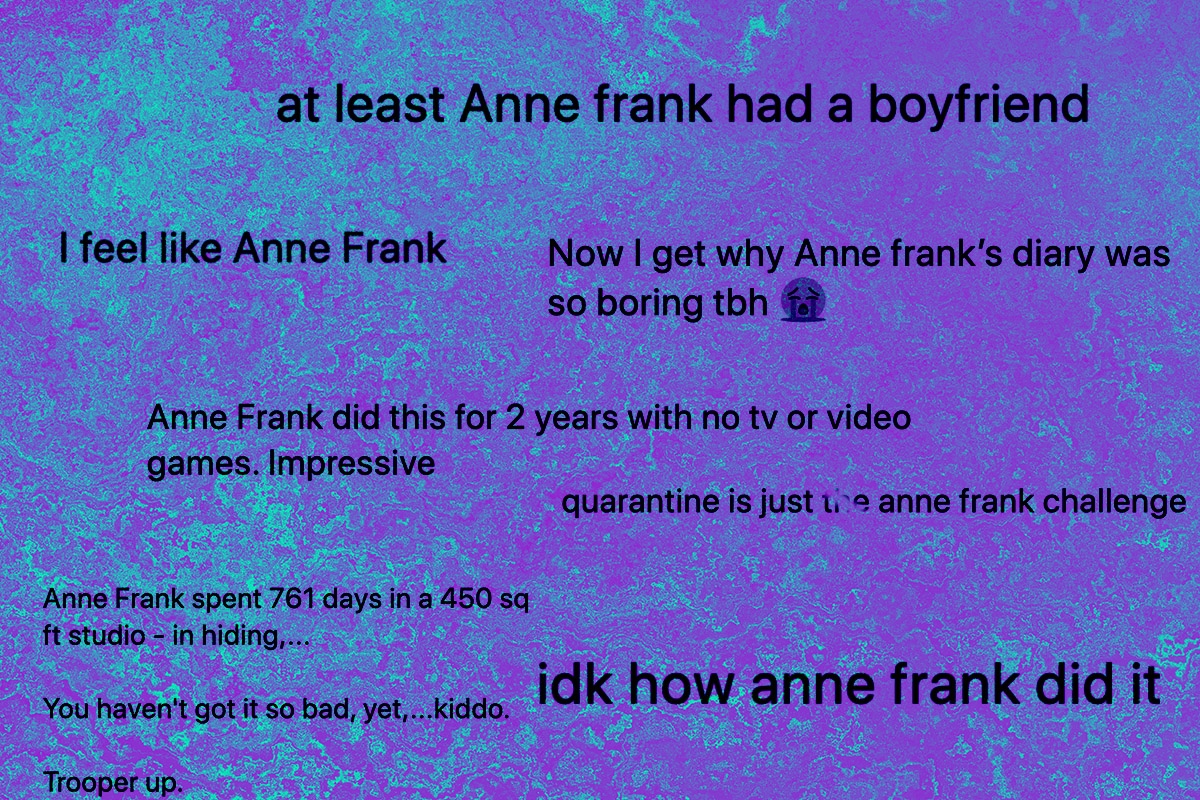 There are quite a few things I’ve been seeing all over my social media feeds ever since the spread of COVID-19 forced everyone to social distance. There are the jokes about no longer wearing a bra, comments about being confused over what day it is and comparisons to Anne Frank hiding in an attic.

One of these things is not like the other.

The U.S. government recommending individuals to practice social distancing in order to prevent the spread of a deadly virus is not at all similar to being forced into hiding to avoid the impending threat of a state-sponsored genocide. In fact, to make the comparison is egregiously offensive. So why do I keep seeing people doing just that?

On Twitter, if you search “Anne Frank” now, you will find an abundance of users tweeting about how they now know exactly how Anne Frank felt after a week in quarantine. Some of these even go as far as to say that Anne Frank had it much better than us right now. And I feel like I am losing my mind.

There are so many things wrong with this; let me count the ways.

First, timing. Anne Frank’s family was in hiding for a total of 25 months before they were discovered by the Gestapo in August 1944. Most of us are still in our first weeks or month of social distancing. Fourteen days versus 761 days. Not exactly the same.

Another variable are the spaces in which people are stuck. In the case of the Franks, eight people were stuck inside a small annex that had approximately 450 square feet of floor space. Anne herself wrote that it was relatively luxurious compared to where many other Jewish people were forced to hide. The eight people in this annex could not leave, and the only way for them to get food was through a few trusted non-Jews who could sneak in items. They also needed to keep the secret annex dark because light would attract attention, and it was silent because noise would do the same.

Americans in quarantine can still go grocery shopping and do other essential tasks. We can go for walks in non-crowded spaces. We can get some sun, listen to music. And social distancing does not mean that people cannot stay in contact with their friends and family. We have social media, FaceTime and Zoom calls to help.

Meanwhile, families like Anne Frank’s were forced to practically disappear from the world to avoid being caught and taken to a concentration camp. It pains me to have to say this, but these conditions are not remotely similar to each other.

Of course, it is also important to emphasize the incredibly differing circumstances of each event. The only similarity I can draw is that both situations are spreading a deadly illness. One is a literal sickness and the other is a figurative one: Nazism. However, that’s not the comparison I have seen people making — they are attempting to compare the isolation aspect. In the first scenario, people across the globe are isolating to avoid spreading COVID-19. In the second, the people were hiding to avoid Nazis who wanted to eliminate their entire race.

If I wanted to give people today the benefit of the doubt, I could say that some of the tweets I have seen were made out of ignorance. But many are so clearly offensive, there is no questioning that they are intentionally anti-Semitic.

Some of these tweets, like the one above, even imply that Anne Frank was lying. One can claim it’s just a “joke,” but with Holocaust denial rising steadily, tweets like these just encourage it.

Tweets like these are damaging to the Jewish and Romani communities, and are mocking the Holocaust and the current pandemic.

The murder of over 6 million Jews and 500,000 Romani people is continually minimized with every tweet. With every retweet and like, their genocide continues to be diminished.

It is already hard enough to deal with the tragedy and consequences of this pandemic. We need to stop worsening it by degrading the memory of Anne Frank to simply the girl in quarantine and stop minimizing the memory of the Holocaust by comparing it to what is going on now.