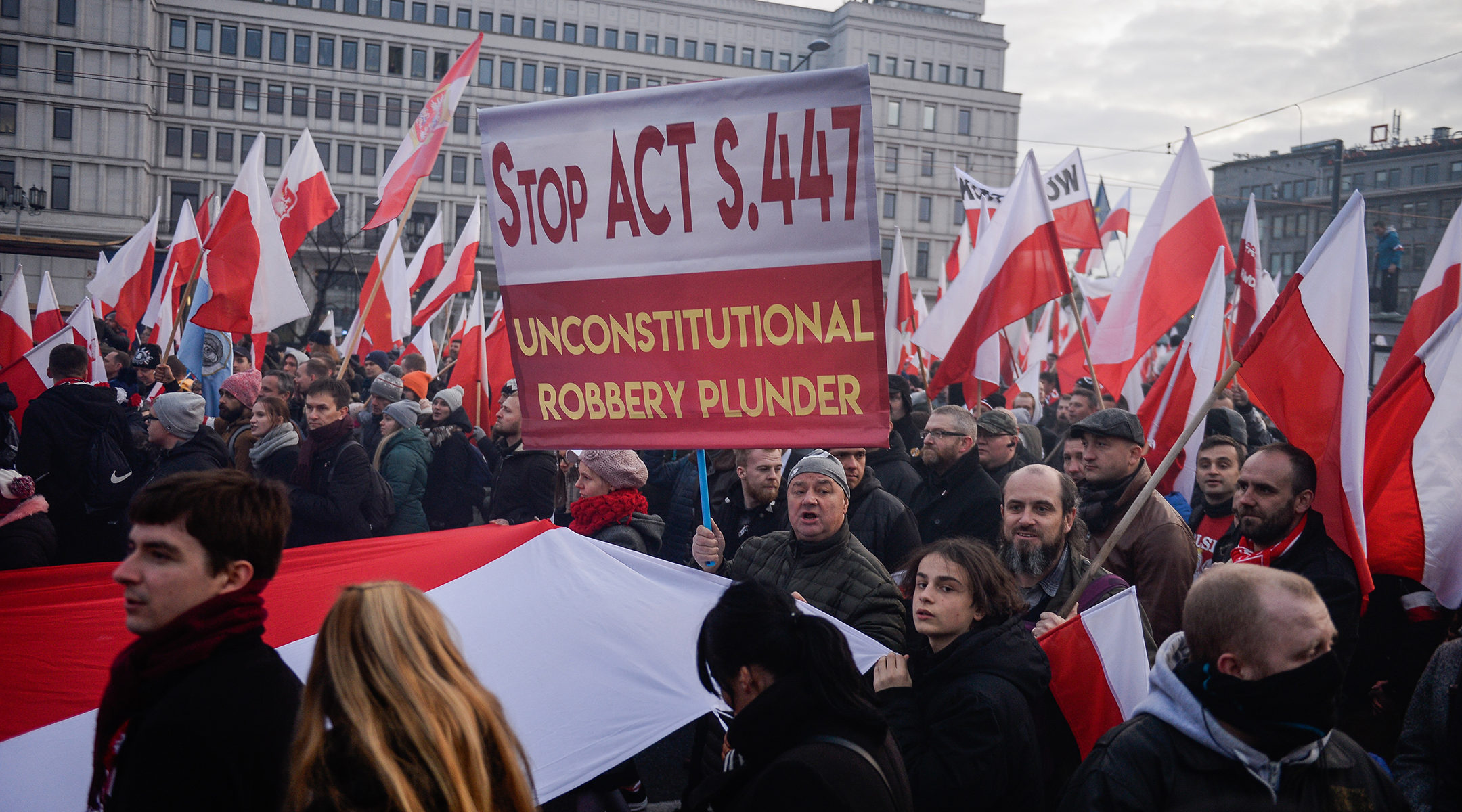 Demonstrators protest in Warsaw, Poland, against U.S. legislation that would require the return of property stolen from Jews in the Holocaust, Nov. 11, 2019. (Omar Marques/SOPA Images/LightRocket via Getty Images)
Advertisement

(JTA) — Poland’s ruling party took a stand on Wednesday against a far-right push to stop the restitution of property owned by Jews and others before the Holocaust.

Far-right activists had gathered enough signatures to present a draft resolution to the Sejm, the lower house of Polish parliament, that would prohibit the redistribution of “heirless property”— property that belonged to private individuals, many of them Jews, who were killed in the Holocaust and whose heirs, if they exist, never filed for restitution.

“It is forbidden to take any actions aimed at satisfying claims regarding heirless property, including negotiations, entering into settlements, recognizing claims and actions relating to heirless property, consenting to mediation, directing parties to mediation or payment of cash benefits,” the draft states. It also states that Nazi Germany, not Poland, is responsible for what happened in Poland when it was occupied by Germany.

Speaking for the right-wing ruling Law and Justice party, lawmaker Arkadiusz Mularczyk said the draft resolution was unnecessary, as “the problem of landless land in Poland does not really exist.”

Maciej Konieczny, a lawmaker for Left Together, called the draft anti-Semitic, adding it was “a scare campaign about Jews who are supposedly going to rob Poland.”

Why it matters: The draft underlined the significance that many from the Polish right-wing, including members of Law and Justice’s base, attach to resisting restitution.

Law and Justice has faced harsh condemnations by Israel, the United States and international Jewish groups over its passing in 2018 of a law that makes it illegal to blame Poland for Nazi crimes.

Reports in Poland about the draft’s reading did not indicate whether Wednesday’s resolution was brought up for a vote. But without Law and Justice’s support, the draft cannot pass.

The background: The draft is the latest development in a campaign designed to resist growing pressures on Poland to offer compensation for property lost during the Holocaust. The far-right petition garnered 200,000 signatures.

The campaign is in part a response to the U.S. Congress’ Justice for Uncompensated Survivors Today act, or JUST, passed in 2018. Also known as Law 447, it is a push to ensure that people who survived World War II or their heirs receive compensation for their losses.

The law requires countries holding Holocaust-era property to ensure “the return to the rightful owner of any property, including religious or communal property, that was wrongfully seized or transferred.”

Poland has given millions back in compensation for property that was owned by Jewish communities, but it is the only major country in the former Soviet bloc that has taken no action to return private property, according to the World Jewish Restitution Organization.