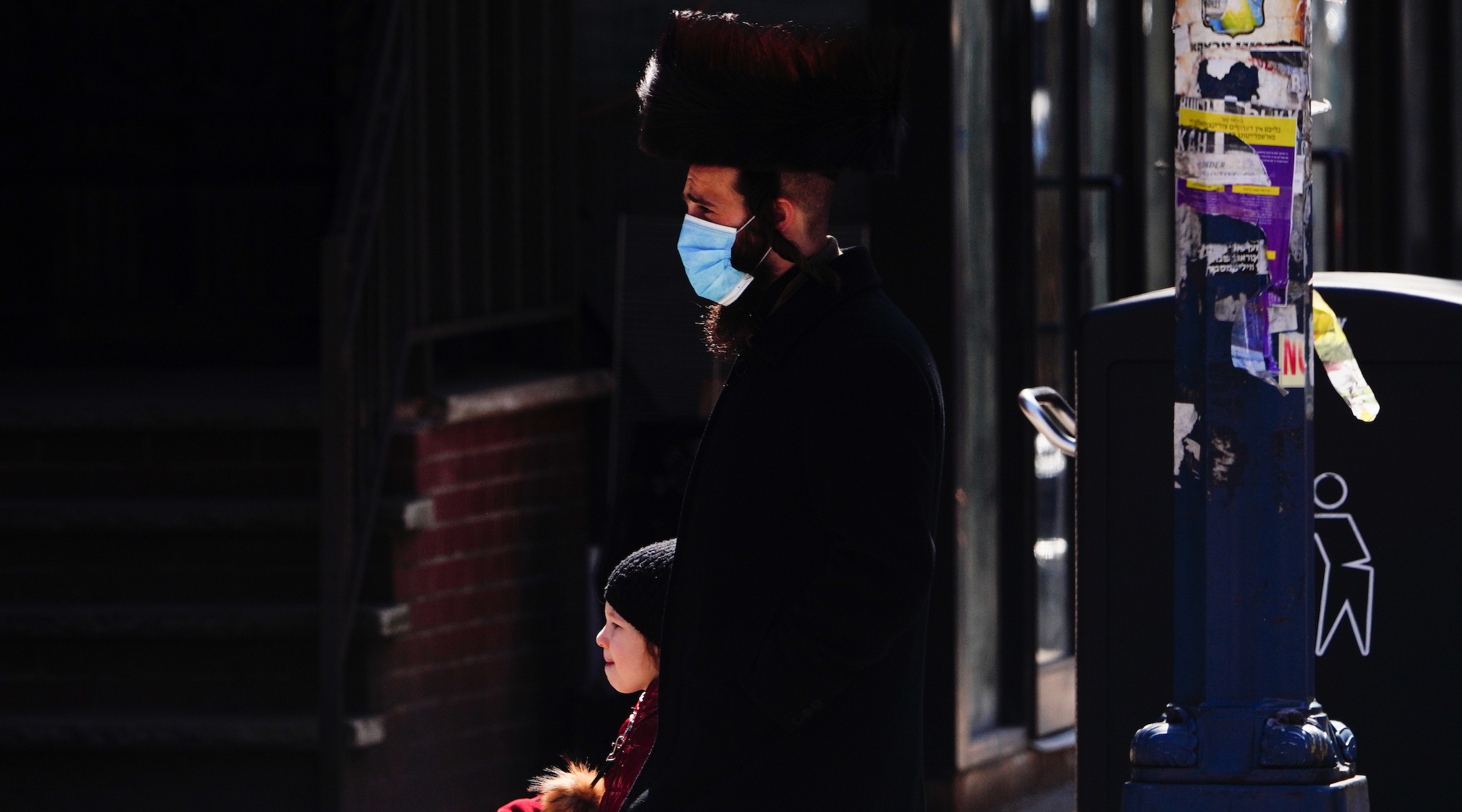 Orthodox Jews walk on the street in the Williamsburg section of Brooklyn, April 11, 2020. (John Nacion/NurPhoto via Getty Images)
Advertisement

NEW YORK (JTA) — Two Hasidic Brooklyn neighborhoods that have been hard hit in the coronavirus pandemic have seen a sharp rise in people dying at home, according to a new data analysis.

At-home deaths in Borough Park and Williamsburg in March and early April were more than 10 times higher than during the same period last year, the analysis of New York City data conducted by the news organization Gothamist concluded.

The analysis provides neighborhood-by-neighborhood insights about a disturbing citywide trend: In addition to the high death toll of confirmed coronavirus patients in this city’s hospitals, more New Yorkers are dying at home during the health crisis. Mayor Bill de Blasio had said it is reasonable to assume that most at-home deaths are attributable to COVID-19. Across the city, ProPublica found, at-home deaths have increased almost sixfold.

The city has not released Zip-code level data about those deaths, or any from COVID-19. But Gothamist used calls to the Fire Department for fatal cardiac arrests to shed light on where the at-home deaths are taking place.

That makes those neighborhoods, both home to large populations of Hasidic Orthodox Jews, two of the areas with the biggest increases in at-home deaths compared to last year. Other neighborhoods with high at-home death rates are Bedford-Stuyvesant in Brooklyn, Jamaica and Astoria in Queens, and Washington Heights in Manhattan.

Borough Park and Williamsburg, along with the Orthodox Brooklyn neighborhoods of Crown Heights and Midwood, have had among the highest rates of the new coronavirus across the five boroughs, according to the New York City Department of Health. As of April 17, Borough Park has had more than 1,900 positive tests for the coronavirus, the fourth-highest number of any of the city’s Zip codes.

Motty Brauner, a member of Borough Park’s Shomrim, a volunteer Hasidic security patrol, told the Jewish Telegraphic Agency that requests have soared in recent weeks from callers seeking wellness checks on isolated relatives and friends. He said the callers want to make sure their loved ones have everything they need. If the Shomrim believes that an individual needs medical assistance, the patrol contacts Hatzolah, a Jewish emergency medical service.

Brauner related a case from April 5 in which the Shomrim was unable to reach a 50-year-old man. Upon finally being let into his apartment, the volunteers discovered that the man was dead. Brauner does not know for sure if the man died from COVID-19.

“It’s troubling to think about it,” he said. “It was difficult because we had to wait a day and a half until we were able to track down a family member to open the door.”

Brauner said the coronavirus appears to have “slowed down” in the neighborhood as residents have obeyed social distancing regulations. But he’s worried about another spike following the Passover holiday, which ended Thursday and is celebrated traditionally in large family gatherings.

“I’m a little bit concerned about what’s going to be in a week or two,” he said.