As emergencies grow for Holocaust survivors amid pandemic, helpers try to keep up 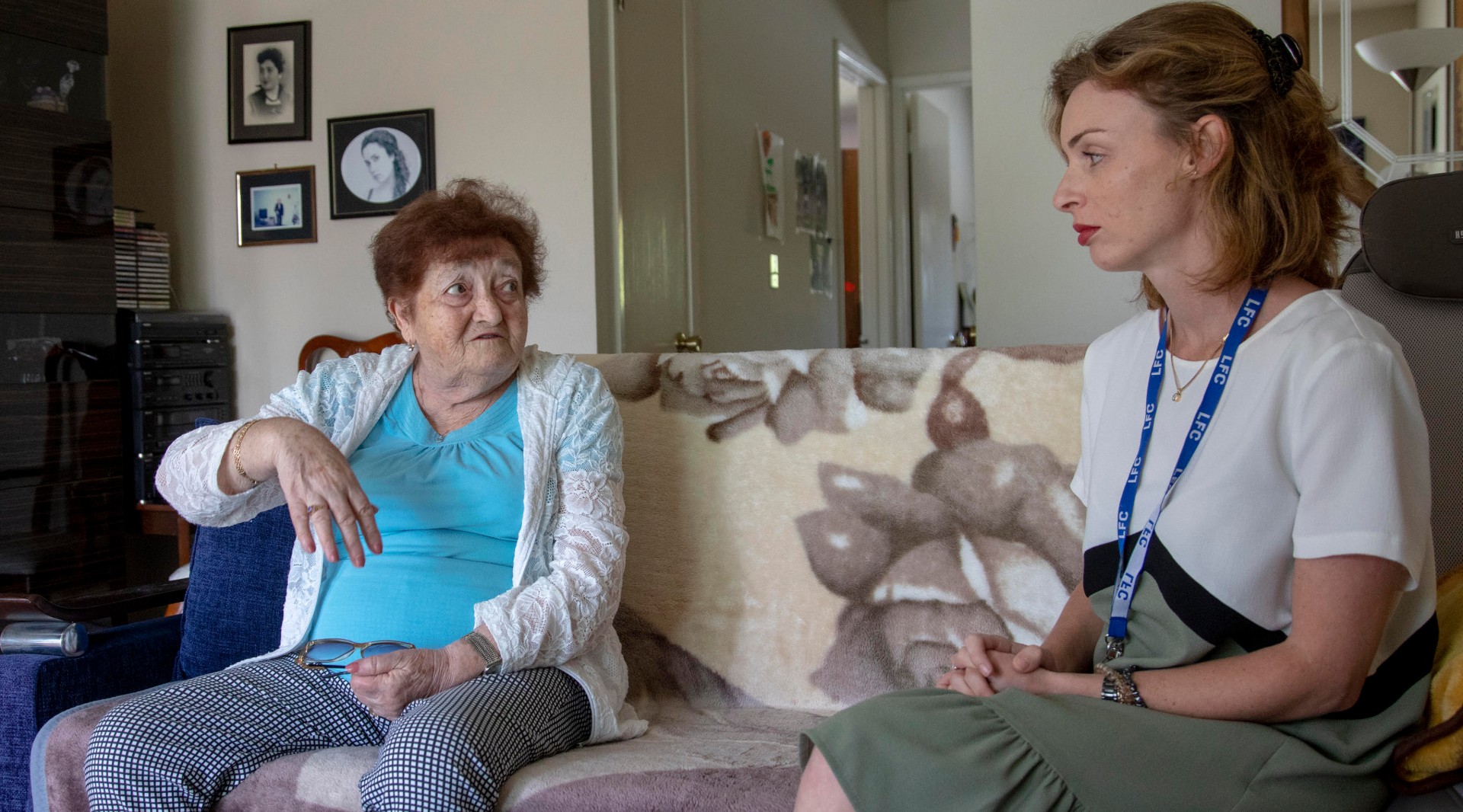 Louis was barely 2 years old in September 1939 when Nazi troops stormed into his Polish village near Krakow, rounded up the men and boys, gave them shovels, forced them to dig their own graves and shot them.

Louis was spared because his father, who was in another city, heard what was happening and quickly arranged for a Polish friend to hide him and his mother on a farm for the war’s duration.

After liberation by Russia’s Red Army in 1945, Louis ended up in a German DP camp. In 1950 he made his way to Vineland, New Jersey, where his father, along with hundreds of other survivors, went into the chicken farming business.

Now Louis, who asked that his last name not be used for privacy reasons, is trying to get by while under coronavirus lockdown in his Vineland home. Access to groceries and other basic household items remains limited. He credits local Jewish agencies with helping.

Even before coronavirus made headlines, Holocaust survivors already were struggling to make ends meet, according to Marcy Gringlas, co-founder of Seed the Dream Foundation. In March 2019, she and her husband, Joel Greenberg, forged their foundation’s partnership with the nonprofit Kavod, creating the Kavod Survivors of the Holocaust Emergency Fund (known as Kavod SHEF) to provide emergency aid to Holocaust survivors in need.

During the first six months of the program, Kavod SHEF received a little over 900 requests for help. In a dramatic sign of growing need, during just the first three months of this year more than 1,200 such requests have come in, according to Kavod’s executive director, Amy Israel Pregulman.

On the local level, new partnerships have been formed with Jewish federations and Jewish Family Service agencies through which locally raised funds for survivors are matched by national coalition dollars. All the money goes directly toward emergency needs. The goal is to raise $5 million, which will be distributed across more than 25 metro areas nationwide.

“The statistics are pretty heartbreaking,” Gringlas said. “More than a third of the 80,000 survivors in the U.S. live in poverty. Thousands are isolated and in great need — and now this pandemic has made them even more vulnerable. My greatest fear is that by the time we rally around this they may all be gone.”

Gringlas’ connection to the cause is deeply personal: Both her parents are survivors. Her Polish-born father, Joseph, 94, survived various concentration camps, including Auschwitz and Mittelbau-Dora in Germany, before immigrating to Detroit in 1950. Her mother, Reli, 81, was hidden in Slovakia’s Tatra Mountains and was brought to America after the war.

With the pandemic raging, the Kavod SHEF coalition is providing additional emergency aid grants to local communities for food, emergency home care and deliveries, Gringlas said. In another sign of growing needs, 71% of all requests to the coalition since Jan. 1 have been for food assistance, up from 45% in the previous six months, according to Israel Pregulman. 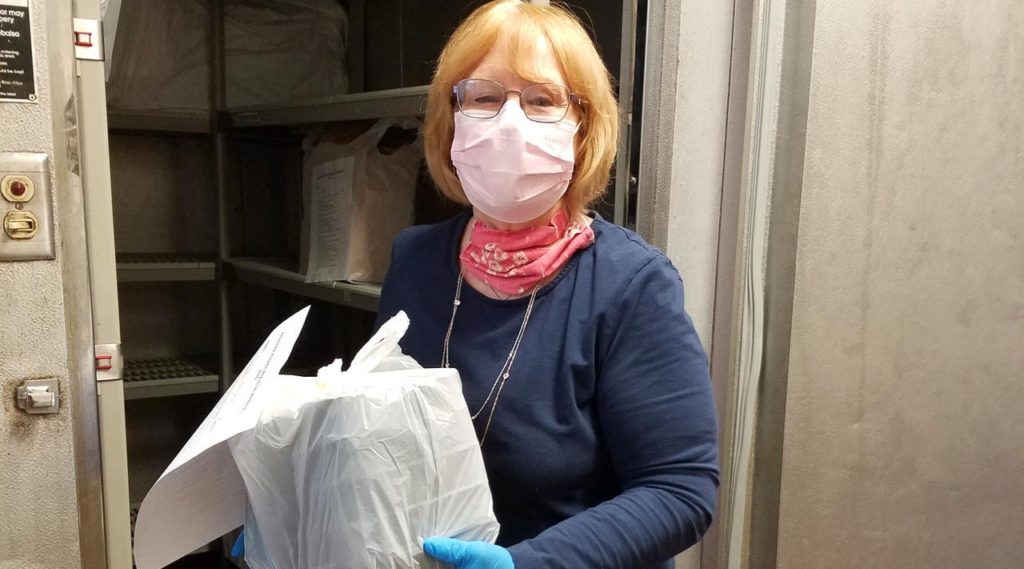 Aside from survivors’ physical needs during this pandemic, they also face greater psychological risks.

“The crisis is causing some of these survivors to relive their circumstances, depending on their experiences during the Shoah,” said Howard Horowitz, director of the Holocaust Survivor Assistance Program at the Ruth & Norman Rales Jewish Family Services in Boca Raton, Florida. “It’s a very big challenge for them to be locked down and isolated.”

Boca Raton joined Kavod SHEF in early 2020, giving survivors in the community access to additional funds. Among other things, that enabled the purchase of $400 gift cards to buy food for Passover for 400 or so survivors in that South Florida city.

In Cherry Hill, New Jersey, volunteers working in coordination with the local Jewish Family & Children’s Services distributed $7,000 worth of supermarket gift cards and over 200 bags of food to Holocaust survivors before Passover.

Lorraine, 86, of Vineland, is among the aging survivors there receiving assistance. She lives with her 95-year-old husband, Alfred, in the small house they bought 16 years ago, and has kosher food delivered to her home.

“Most of us are old now and cooking is a problem,” she said. “Unfortunately it’s very hard to go food shopping because of the virus.”

Gail Belfer, director of Holocaust survivor services and advocacy at the agency, said, “As they age and become frail, they require more emotional and physical support. A few still drive, but now they can’t even do that and we can’t be near them.”

In California, about 180 residents of Santa Clara County who survived or escaped the Holocaust receive kosher food, housing assistance, counseling and therapy from Kavod SHEF via Jewish Family Services of Silicon Valley in Los Gatos. Across the country, Kavod SHEF partner communities are submitting requests each day as access to food, medicine and emergency care becomes more challenging.

“Sadly, we know that the need for emergency services during this pandemic and beyond will continue to grow for this most vulnerable population,” Gringlas said. “It is our hope that together, through our shared efforts, we will be able to offer survivors the dignity they deserve.

“This really is our last chance. We can and must do this together. There is no time to waste.”

This article was sponsored by and produced in partnership with Seed the Dream, a private foundation that supports meaningful access to education and empowers Holocaust survivors to maintain their dignity during their later years of life. This story was produced by JTA's native content team.

More from Seed the Dream Foundation