The haredi Orthodox community has always shunned ‘mosers,’ or informers. Coronavirus is just the latest example. 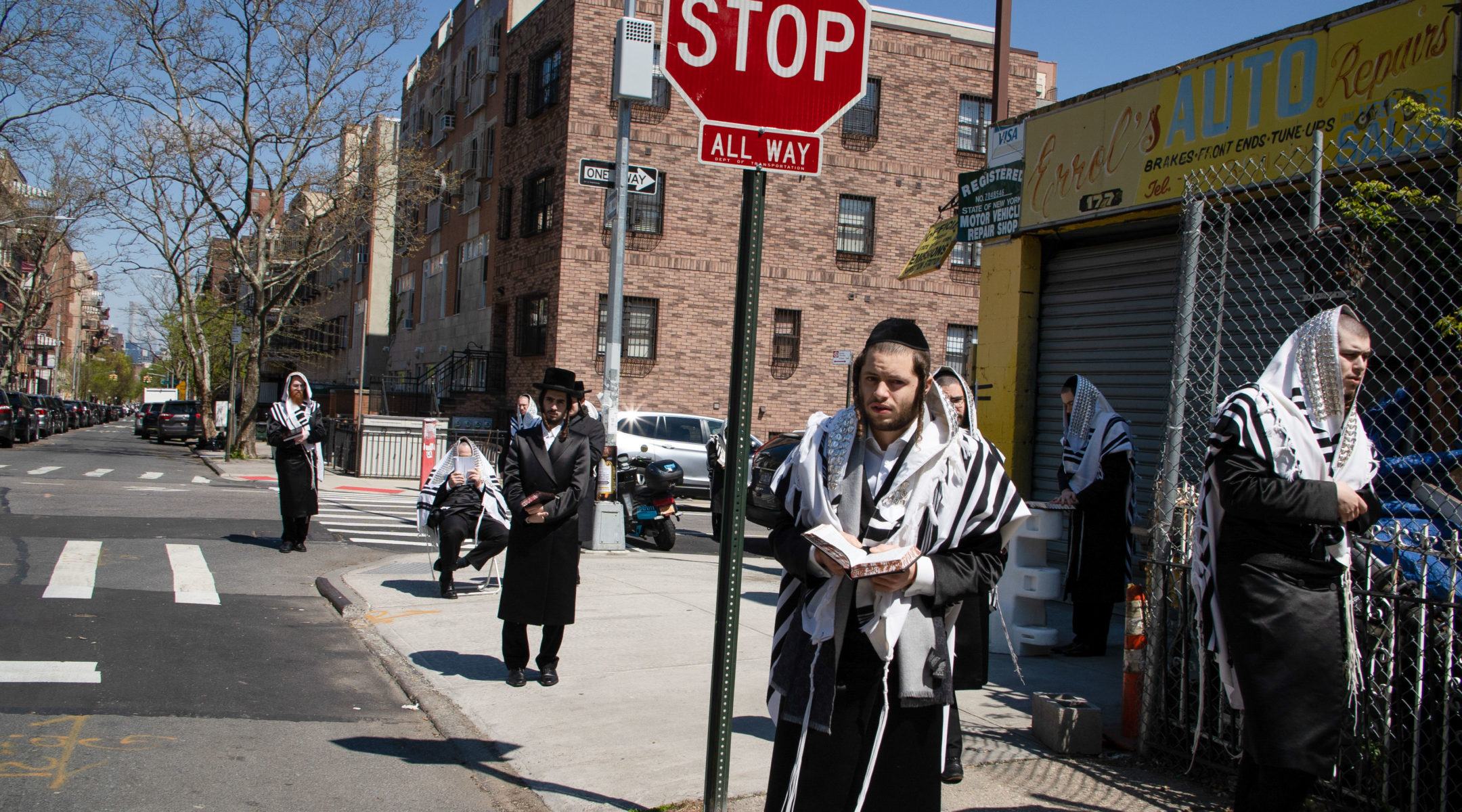 (JTA) – Jacob Kornbluh was walking past his synagogue in the Brooklyn neighborhood of Borough Park on Passover when he noticed a light on inside the building. Knowing that the synagogue had been closed as a result of the coronavirus pandemic, he looked inside and saw approximately 40 people praying.

“I said to myself this can’t be true,” said Kornbluh, a political reporter for Jewish Insider and a member of the Hasidic community. “I know for a fact that this shul was ordered to be closed and the main door was locked.”

After the holiday, Kornbluh filed a complaint with New York City’s social distancing complaint hotline and a few days later posted a video to Twitter (now deleted) of himself confronting a man leaving the same synagogue before Shabbat.

The video would land Kornbluh’s name and face on a “pashkevil,” a flyer commonly posted in haredi Orthodox neighborhoods to spread information. This particular pashkevil was posted online and labeled Kornbluh and two others “mosrim,” informers who betray fellow Jews to secular authorities. Some who shared the flyer on Twitter even quoted the medieval Jewish philosopher Maimonides, who wrote that it’s permissible to kill a moser.

While Kornbluh may not be in any physical danger from the pashkevil, which was created by an anonymous Twitter account with just a few hundred followers, it is emblematic of a wider effort to intimidate Hasidic Jews who speak out about problems in their communities.

Mesirah – literally “handing over” in Hebrew – is considered a serious infraction in haredi communities, which typically prefer to handle sensitive issues internally. (One who is guilty of mesirah is a moser.)  Whistleblowers who have sought to draw attention to the problem of sexual abuse in the haredi, or ultra-Orthodox, community, or to the lack of basic secular education, have been branded mosrim – a label that can lead to all manner of social ostracization.

“The origin of this situation is that in much of Jewish history, Jews weren’t treated fairly before the law,” said Moshe Krakowski, a professor at Yeshiva University who studies haredi Orthodox society.

“Ultra-Orthodox culture is a very learned culture, so everybody’s got exposure to the same texts. So you’ll have people who will accuse others of all sorts of things, including mesirah, on the basis of their understanding, but not necessarily sanctioned by any rabbinic authority.”

Mesirah has been used in the past to deter sexual abuse victims and their families from turning to the police for help – and to exact a social price from those who do.

In 2013, a Hasidic woman who testified against her abuser, Nechemya Weberman, walked out of her Brooklyn synagogue in the middle of Rosh Hashanah services after another congregant repeatedly called her a moser, shouting until she left, according to the New York Post.

“This idea of mesirah comes up all the time,” said Asher Lovy, an Orthodox activist who runs Za’akah, an organization advocating for sexual abuse victims in the Orthodox community.

“If you were molested and reported it to the police and your father has a job somewhere in the community, he could be fired, you could be thrown out of yeshiva,” he said. It’s as if “your personhood kind of ceases to exist in the minds of anybody in the community.”

In the case of the pashkevil targeting Kornbluh and two other men, Mordy Getz and Rabbi Yakov Horowitz, the consequences may not be as severe, as most community leaders have endorsed official guidelines on social gatherings. Virtually all synagogues and schools in New York’s haredi communities have been closed, and community leaders have repeatedly urged people not to assemble in secret minyanim, prayer quorums, in homes or synagogues.

After the Forward reported that some teachers at a school in Williamsburg were continuing to teach students secretly, the school sent out a robocall saying the practice was forbidden.

The issue with Kornbluh’s tweet was less the warning about violating social distancing guidelines but the use of social media to do it. Haredi often are averse to airing their community’s dirty laundry in public, and with reports suggesting that anti-Semitism is on the rise as a result of the coronavirus, there is particular sensitivity around taking community problems to social media.

“I don’t mind calling the police to report, I care about posting photos and videos from the handful of Jews who violate the regulations,” Eli Mendel, who reposted the pashkevil from his @HeimishNiyes Twitter account, told the Jewish Telegraphic Agency in a private message.

Getz and Horowitz, the other two men named as mosrim in the pashkevil, declined to comment for this story, but both had been outspoken in calling for Orthodox Jews to abide by social distancing guidelines.

On March 17, New York Times columnist Bari Weiss posted a picture of a massive wedding in Borough Park and cited Getz, a real estate developer and owner of a popular Jewish bookstore there, who said there were two other large weddings happening that day. The next day, Weiss posted a video by Getz imploring people to stay home to protect those with compromised immune systems – including cancer survivors like himself.

This photo was just sent to me by a Hasidic friend in Brooklyn with a 104 fever. He’s enraged. This was a wedding on Sunday of a key Satmar figure. Many yeshivas remain open today. “This is a Hillul Hashem,” he says. And it’s a betrayal of the primary Jewish value:
choose life! pic.twitter.com/bxjQ5JwzJS

“Today, and only after I consulted with dozens of community leaders … which admitted to me that they’re helpless in the face of vocal extremist leaders, I did what I felt is my obligation to raise my voice and wake up the community and show the world that we, the majority of Hasidim in New York, are not blind, selfish and careless,” Getz said in the video. “My work has borne fruit, and it seems that even the extremists were beaten into submission today.”

Getz later posted some of the private messages he received from those who were angry at his public actions.

“Shame you didn’t die from cancer,” one said.

Horowitz, the director of the Center for Jewish Family Life/Project YES, an organization that provides resources on parenting and abuse prevention, had been particularly outspoken on the issue of “house minyanim,” prayer services held in private homes after synagogues were closed. After the pashkevil was published, Horowitz alerted local police, who have opened an investigation.

“I’m not intimidated at all. It is unsettling, it might be a little frightening, too, but it’s certainly a fight worth fighting,” Horowitz said in a video posted to Twitter. “This is about social distancing, but it’s also about the right to speak your mind and not have terrorists try to intimidate.”

“Dear Friends: I took down the post about the flyer,” he wrote in a tweet Wednesday. “It was being weaponized by some as a blunt instrument against our entire community in a way that was deeply troubling.”