Throwing candy at the computer: What celebrating your bat mitzvah looks like in the time of the coronavirus 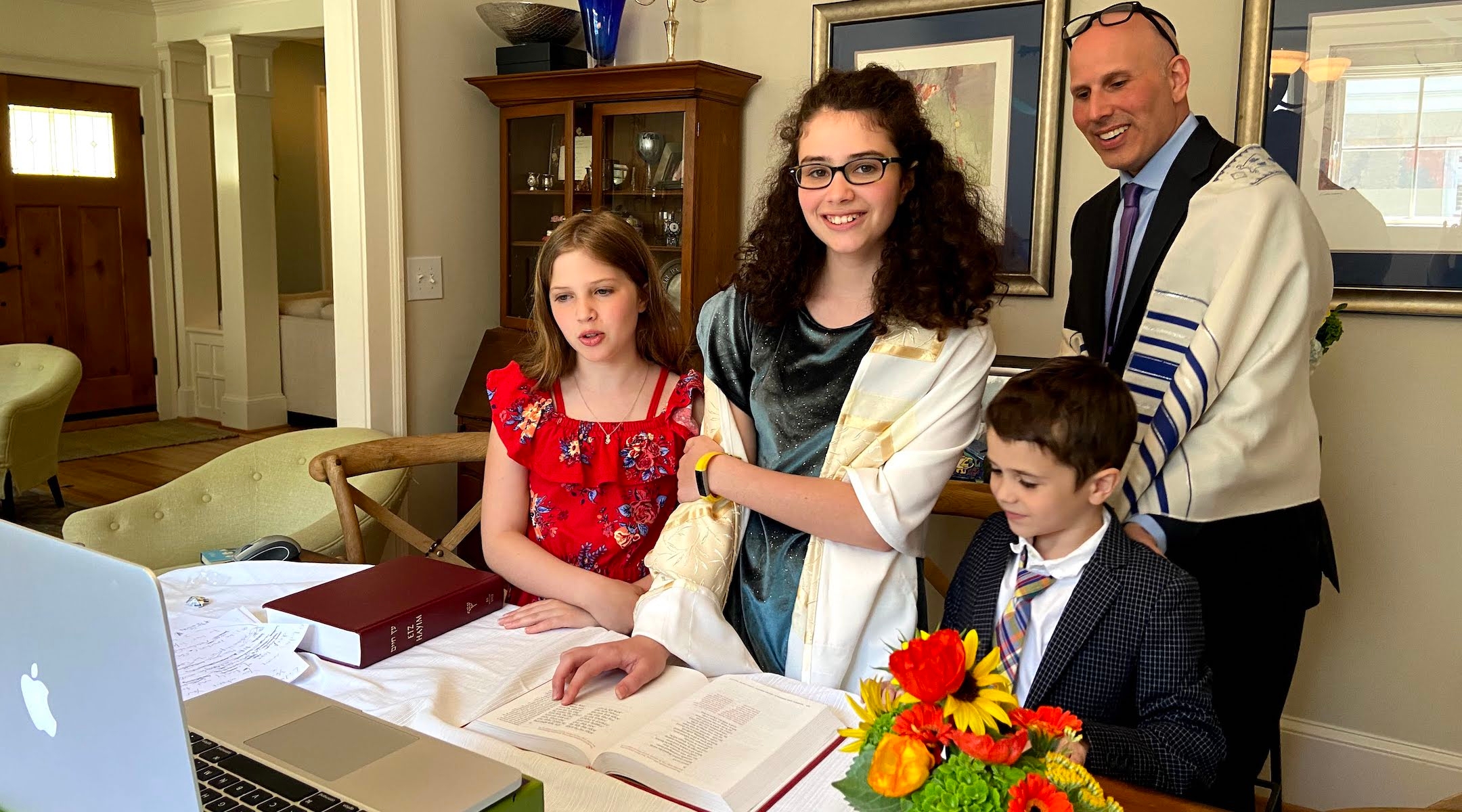 Lila Duke celebrated her bat mitzvah at home as more than 100 guests tuned in on Zoom. (Courtesy of the Duke family)
Advertisement

Minnie’s interruption was one of many ways that Lila’s coming-of-age ceremony was different from what she had expected.

While the 12-year-old still read her Torah portion in front of more than 100 people, still got to wear a pretty dress and still was showered with candy, she was at home with her parents, Susan and Jon, and younger siblings, Naomi and Ezra, not at her family’s Atlanta-area synagogue.

Lila addressed community members on Zoom rather than giving her sermon in a sanctuary. She read the Torah portion she had been practicing for a year from a book instead of a scroll and therefore wasn’t able to recite the blessings she had been practicing. And at one point, Minnie jumped up on the table where the family had perched a computer on top of several stacked puzzle boxes and her mom had to rush to get the animal out of the way.

Such is the bat mitzvah in the coronavirus era.

“It’s different right? Everyone has their bat mitzvah or whatever, but not everyone has had a Zoom bat mitzvah,” Lila said in a phone interview with the Jewish Telegraphic Agency a few days after the rite. “I was sad I didn’t get to have a party though.”

Lila’s family plans to have a party for her once it is deemed safe. But even though parties can be postponed, it is harder to delay the service itself. Most kids spend a year training to chant the Torah portion for their specific date, and choosing another date would mean they would have to learn a different reading.

So as with so many events these days, many families are opting instead to do the service virtually, sometimes with drive-by, socially distanced celebrations as well. (Orthodox synagogues do not allow livestreaming on Shabbat). One event planning company has even started offering virtual bar and bat mitzvah planning services, including helping to organize a virtual party complete with party favors and hora dancing. 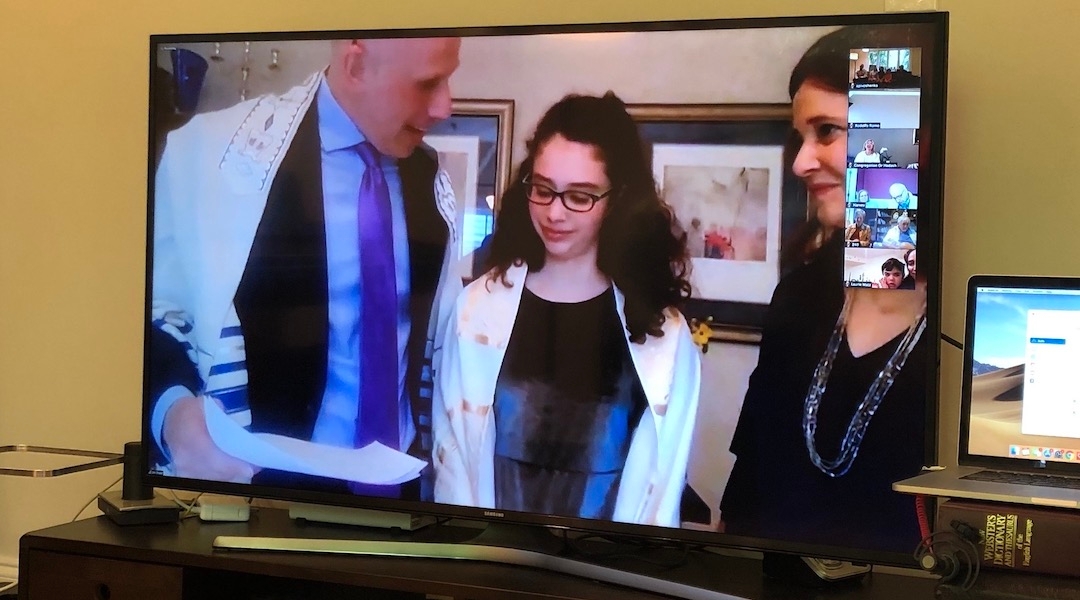 Lila participates in her bat mitzvah service with her parents, Jon and Susan. (Courtesy of the Dukes)

At a typical bat mitzvah, a number of family members are called to the Torah to say a blessing ahead of the scroll reading. Since Lila was reading from a book rather than a scroll, however, the Hebrew blessings could not be said. Instead, family members prepared short blessings in English to mimic the traditional order.

The Dukes set up two monitors in their living room, so they could watch both the service leader and the congregants tuning in. Susan Duke had decorated the room with orchids, peonies, tulips and roses from a local florist to make it look festive.

Guests typically shower the bat mitzvah with candy after she completes the haftarah reading. In Lila’s case, her parents and siblings threw Hershey’s kisses at her, while the congregants threw sweets at their computer screens and sent her candy emojis in the Zoom chat. Her parents also hoisted her up on a chair after the reading, as is customary during Jewish celebrations.

And just because the guests weren’t meeting in person didn’t mean they didn’t dress up, though the Duke family opted to go without shoes since they weren’t leaving the house and Lila wore a comfortable cotton dress rather than the long satin gown she had initially picked out.

Following the three-hour service, Lila’s family recited the kiddush and ate the French toast casserole that her mother had cooked as they video chatted with a smaller group of relatives.

Rabbi Analia Bortz, who with her husband, Rabbi Mario Karpuj, leads Congregation Or Hadash, the Conservative synagogue where the Dukes are members, had worried originally about whether there would be technical difficulties. But she left the service impressed by how well it worked out and how the community came together to celebrate Lila’s special day.

“In 30 years in the pulpit, many things have changed and have left a big hallmark in our lives, most of the time for good reasons, but this one was one of the highlights of our careers,” Bortz said. “It was very, very special.”

“We just thought we’d try it, and it was so much more intimate and personal and successful than I imagined it could be,” the bat mitzvah mom said.

One unexpected perk of doing the service on Zoom was that Lila, who had been anxious about doing her Torah reading in front of a large audience, felt less nervous.

“I didn’t have a bunch of people watching me doing scary stuff,” she said. “They were there but they were on the screen. I felt it wouldn’t be as big of a deal as if I was actually there in front of everyone.”

Meanwhile, Lila hopes she can serve as a model for other kids who will have to do their coming-of-age ceremonies virtually, too, as it becomes increasingly clear that limitations on large gatherings won’t be lifted imminently.

“People were watching me, other people who are going to probably do the same thing,” she said. “They wanted to know what it was like.”