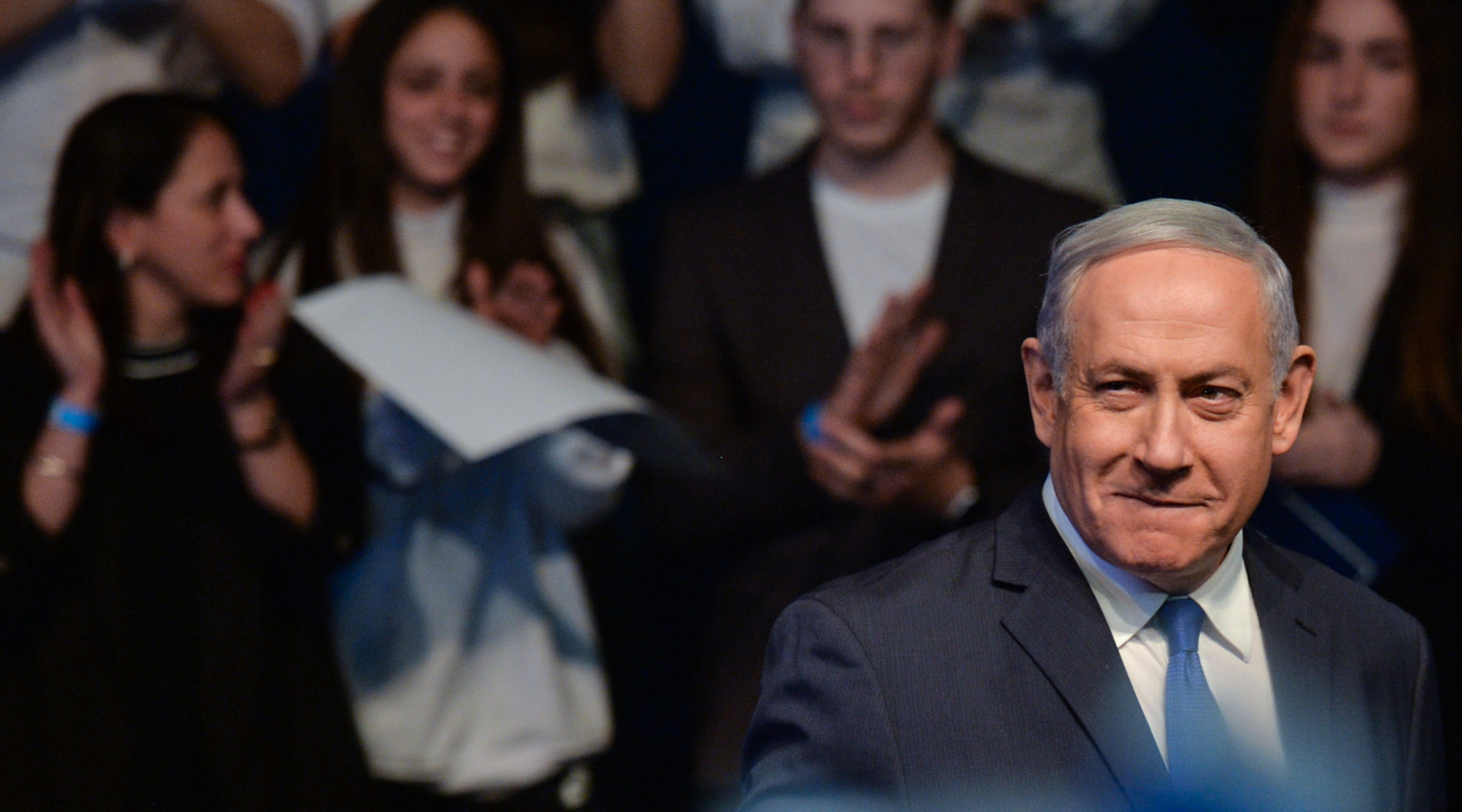 WASHINGTON (JTA) — After three Israeli elections in the course of 12 months, Prime Minister Benjamin Netanyahu and his rival Benny Gantz have finally signed a deal to create a unity government that could last 36 months.

From a substantive perspective, the deal has gotten Netanyahu all of the things he prioritized the most through a series of tangled loopholes. For Gantz, it is the opposite.

Netanyahu’s primary overarching goal — the shadow of which has fallen across nearly every action he has taken — has been to remain in office irrespective of his legal troubles. The agreement accomplishes this through multiple avenues. Short of having his trial canceled, Netanyahu could not have drawn up a better way to circumvent the consequences of his legal issues so thoroughly.

First, it allows Netanyahu to remain prime minister for the next 18 months as his trial on three separate indictments takes place, granting him the ability to maintain all of the privileges of his office despite the legal circus that will inevitably ensue. It also allows him to maintain the privileges of being the “alternate prime minister” after that — essentially the backup to Gantz, who will take over the role.

That status also will exempt Netanyahu from the requirement of resigning as a non-prime minister under indictment.

Netanyahu has also consistently raised the issue of West Bank annexation and applying Israeli sovereignty to settlements since he first pledged to do it days before the first election, in April 2019. By explicitly including the issue in the coalition pact with Gantz — and all the more so by setting a specific date for its consideration and initial implementation — Netanyahu has moved annexation much closer to becoming reality. It’s a policy that he will now be associated with in the history books.

Furthermore, by nesting its contours in the coalition agreement within the precise ones drawn up by the Trump administration, Netanyahu has provided the Trump team with near absolute power to implement whatever vision it desires.

Along with annexation, installing right-wing judges in order to limit the power of the judiciary relative to the Knesset has become as important to the Israeli right as the issue of confirming federal judges is to the American right. It’s the Israeli right’s goal to roll back the so-called constitutional revolution instituted by former Supreme Court President Aharon Barak. The deal agreed to by Netanyahu and Gantz guarantees that no justice will be appointed who does not meet a right-wing litmus test.

In addition, Netanyahu gets a veto over the appointments of the new state attorney and attorney general — not coincidentally, the two positions that had to recommend and approve the indictments against him.

Whereas Netanyahu is sacrificing some measure of political power (for now) in return for tangible policy wins, with this deal, Gantz gave up on every substantive issue that he has spoken about as critical over the past year and a half in return for political power — both real and perceived.

Gantz spoke about not legitimizing a prime minister under indictment and under no circumstances serving under one. He spoke about preventing any West Bank annexation not endorsed by the international community and/or done in coordination with Jordan and the Palestinian Authority. He spoke about protecting the judiciary from political influence or attempts to circumvent its authority. On every one of these issues, Gantz folded.

In return for all of this, Gantz becomes defense minister — no small prize, to be sure  — with the promise of becoming prime minister in 18 months, though it is noteworthy that only 31% of Israelis think the rotation will actually take place. Gantz’s Blue and White, which is now in tatters after Gantz’s shock compromise, also gets to chair the Defense Ministry, the Foreign Ministry, the Justice Ministry, the Knesset Foreign Affairs and Defense Committee and a host of other plum posts, all of which give it authority over a wide set of issues.

The flip side is that in many ways, these are Potemkin positions that appear powerful but actually are not. Gantz is defense minister, but Netanyahu is free to decide the ultimate fate of the West Bank on his own. Avi Nissenkorn will be justice minister, but anything he does can be hampered by the Constitution, Law and Justice Committee, which is chaired by Netanyahu’s Likud — not to mention the veto Netanyahu has over senior Justice Ministry appointments and the situation with the judges selection committee.

Assuming that Netanyahu honors the rotation agreement and yields to Gantz after 18 months, Gantz will take his new position with Israel’s longest serving – and arguably politically savviest – prime minister still enjoying the trappings of the office as alternate prime minister, and saddled with a Knesset majority that relies on more than twice as many Likud Knesset members as his own Blue and White.

The entire arrangement is reminiscent of 2013, when Netanyahu appointed Tzipi Livni to lead Israeli-Palestinian negotiations but made his personal attorney Yitzhak Molcho her minder who had a veto over anything she did or any decisions she made.

The deal is being portrayed as a mechanism for transitioning away from the Netanyahu era, when in reality it appears to set the stage for him to remain in power. This is all essentially a bid for time on the part of both Benjamins: time for Netanyahu to sort out his legal troubles while staying in power, and time for Gantz to figure out how to take his illusory gains and turn them into real ones.

We don’t know with certainty which one will use his time to better effect, but considering which of the two men got nearly everything he wanted out of this deal and which did not, I know where I would be placing my bets.

Michael Koplow
is Policy Director of the Israel Policy Forum.
The views and opinions expressed in this article are those of the author and do not necessarily reflect the views of JTA or its parent company, 70 Faces Media.