These are Biden’s Jews 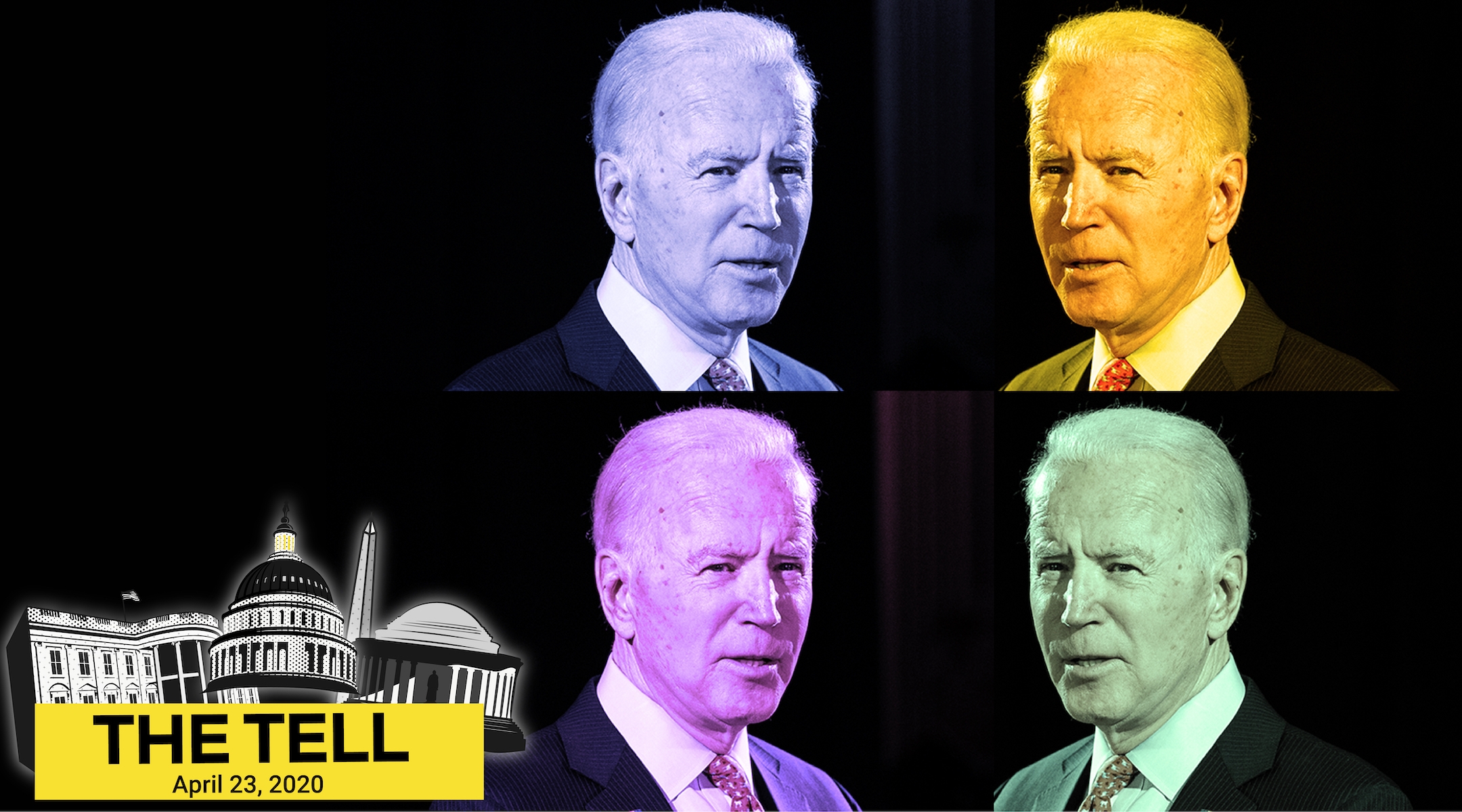 WASHINGTON (JTA) — We’ve been gone two Thursdays because of the Passover holiday. Lots to catch up on.

Sanders’ formal endorsement five days later made Biden the lone candidate standing earlier than any non-incumbent nominee since John Kerry, who dispatched the field in March 2004.

That gives Biden a head start in his bid to oust Donald Trump from the White House, but Trump has some major advantages, notably in media play and fundraising.

The president has the pulpit of his daily White House pandemic news conferences, which often veer into campaign-style rhetoric. Biden, meantime, is confined to delivering daily pep talks from his Delaware home, where he barely registers online. There is the occasional exception, like the bro session on April 13 when Sanders endorsed Biden. That earned millions of views.

As to fundraising, The New York Times reported this week that Biden was behind Trump by $187 million, meaning he would have to raise $1 million a day until the election just to catch up with where Trump is today.

Which leaves a stew of questions about Biden’s Jewish campaign: Who will he turn to for fundraising? What does it mean for his foreign policy?

The last time Biden ran for president, in 2008, his financial director was Michael Adler, a Miami developer who is ensconced in the Jewish establishment: For years he led the straight down the center National Jewish Democratic Council and he’s been active with AIPAC. Adler is back on board the Biden train, although not in a senior campaign position. He has held fundraisers at his South Florida home.

Call Adler Biden’s Jewish old guard. He’s joined in that respect by an array of other establishment figures, including Comcast senior executive vice president David Cohen, who also has hosted fundraisers for Biden, and Stu Eizenstat, the veteran Holocaust reparations negotiator who penned an op-ed for the Jewish Telegraphic Agency favoring Biden.

But there are new Jewish kids on the Biden block, too. They earned their Democratic cred without having come up through the traditional pro-Israel channels, like accruing influence through AIPAC activism and fundraising.

Examples: Penny Pritzker and Bill Singer are headlining a Chicago area fundraiser for Biden on April 27. Pritzker, the hotel chain heiress whose brother J.B. is the governor of Illinois, was an early backer of Barack Obama and was his Commerce secretary. Singer, a corporate lawyer, is the wunderkind you forgot about: In the 1960s and 1970s, when he was in his 20s and 30s, he joined the Rev. Jesse Jackson in leading left-wing insurgencies against the Democratic Party establishment. These days he’s on the board of J Street, the liberal Middle East lobby group that is AIPAC’s bete noir.

Notably missing from this array is Haim Saban, the entertainment mogul and major Democratic giver who is close to Israel’s political establishment. Saban, who has a notable antipathy to Sanders and others on the party’s left flank, said in March that he was waiting out the primaries but has yet to pronounce.

On the Jewish donor angle, one intriguing establishment vs. insurgent skirmish is who runs the party’s digital campaign. According to coverage in The Intercept and Politico, the outfit that Michael Bloomberg launched for his campaign, Hawkfish, is vying for the job.

The appeal: It’s up and running, it’s already been funded to a significant extent by the media mogul’s cash, and so it is bidding low.

The disadvantage: It’s Bloomberg. If there’s a victory that the party’s left can claim, it is booting the former New York mayor’s campaign to the street. Bloomberg was reviled for his corporatism and his record relating to the city’s minorities and as a boss relating to women. Rep. Alexandria Ocasio-Cortez, the first-term progressive from New York, has emphatically advised against using the group.

Biden has brought into the mix two Jewish Democratic groups that otherwise spent much of the primary season reviling one another: He has the endorsements of both the Democratic Majority for Israel, which is aligned with centrist pro-Israel policy, and J Street. Also in the offing this week is an endorsement from the centrist Jewish Democratic Council of America.

His acceptance of J Street’s endorsement was effusive, although short on specific areas of agreement. Biden, notably, has rejected J Street’s recent policy of leveraging U.S. aid to Israel to influence its policy.

Biden has told associates that his sharpest differences with Sanders are on foreign policy. So, naturally, much has been made of Biden’s reported readiness to accept Sanders advisers on his foreign policy team. It’s not clear yet whether that’s been the case, but it could be a red flag for the AIPAC crowd — Sanders boycotted the lobby’s conference this year and has said he would leverage aid to Israel.

On Israel, Biden has robustly favored a return to making the two-state solution the paramount outcome of Israeli-Palestinian negotiations; Trump has significantly retreated from that goal. The person most identified with Biden foreign policy is Colin Kahl, who was his national security adviser when he was vice president. Kahl, who is not Jewish, was on the team that shaped the 2015 Iran nuclear deal reviled by Israel and Trump has quit.

The Brookings Institution’s Thomas Wright says that the centrist Democrats who advised Obama — and are likely to shape Biden’s outlook — have retreated from wanting to engage in the Middle East. He says they “now favor a significant reduction in U.S. goals” there.

Last year, Biden highlighted what he called the echoes of bigotry in Trump’s governing style — citing Trump’s Charlottesville response, for example, in the center of his campaign rollout. Sanders has said that the same threat is a major part of the reason he is endorsing him, and has cited that threat in shushing former aides who will not back Biden. I’m hearing from Democrats that this will be the preeminent feature of the Jewish Biden campaign.

Biden has three children-in-law — all are Jewish. His Passover statement emphasized the loneliness that Jewish families would suffer during their pandemic Seders. His personal relationship with Jews, in his families and during a long political career, also will be highlighted in his campaign. A Delaware rabbi’s story of encountering Biden at a laundry room shiva has already featured multiple times on the campaign.

Putting her in her placebo: When I profiled Carolyn Goodman in 2016, the Las Vegas mayor made it clear that she preferred to be seen as the non-Trump, working quietly behind the scenes to clean up and attract tourism and commerce to her city. Her proposal this week to make that city a test case for reopening businesses and community life elicited a “what are you talking about?” reaction from the media. She had difficulty in an interview with CNN’s Anderson Cooper explaining why Las Vegans would be the “placebo” in her test.

The Case of the Kosher Signatures: A legal challenge in a Long Island congressional primary hinges on Shabbat observance. We couldn’t make up the bizarre details if we tried.

Jewish wins in Wisconsin: Despite the pandemic and a successful GOP block on Democratic moves to loosen mail-in voting rules, Democrats performed exceptionally well in the Midwest state this month. Jill Karofsky, who is Jewish, was elected to the state Supreme Court, and Katie Rosenberg, who is not Jewish (but doesn’t mind when anti-Semites think she is) was elected mayor of Wausau.

A feh on both your houses: The Republican Jewish Coalition said in March that it would back the opponent of Rep. Tom Massie, R-Ky., a notorious GOP gadfly who has infuriated party leaders with his libertarianism and was among a handful of Congress members who opposed funding for Holocaust education. A partisan Jewish group involving itself in a primary as opposed to a general election is rare. Last week, the RJC dropped support for his opponent, Todd McMurtry, when his racist tweets became an issue in the campaign. Jerome Segal, a Jewish philosopher who inspired the Palestinian declaration of independence, at the AIPAC policy conference, March 4, 2018. (Ron Kampeas/JTA)

On the left, the question of whether it is critical to overlook Biden’s centrism and perceived flaws to focus on ousting Trump features various Jewish voices. Sanders, as we noted above, talks about putting aside differences. Since Ralph Nader’s 2000 run for the Green Party, the capacity of the left to disrupt an election has not been an academic question. This time, the Greens and other small parties go to the default answer — they won’t blame themselves for the failure of Democrats to galvanize voters. The Philadelphia Inquirer’s Julia Terruso canvasses small parties — and one of them, Bread and Roses, a socialist party founded by Jerome Segal (an academic who helped bring about the Oslo peace process), is sitting out the election in swing states like Pennsylvania.

Sen. Mark Warner, D-Va., posted a quarantine video, as have many others, of his favorite isolation meal: A tuna salad sandwich, microwaved. Sen. Kamala Harris, D-Calif., says he needs to get in touch, stat.