Arab Israelis fear that Ramadan could bring a coronavirus surge 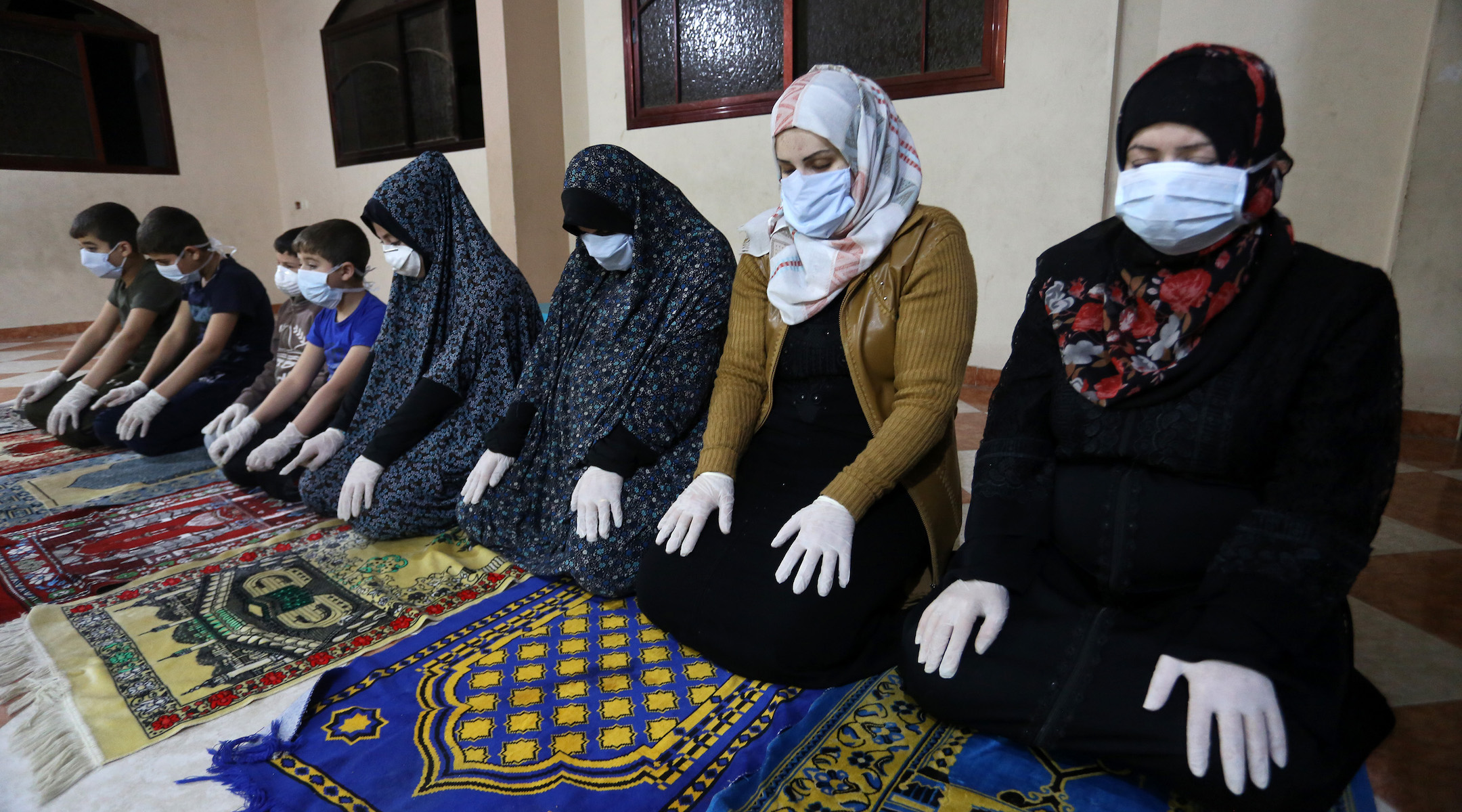 A Palestinian family in Gaza wearing protective masks prays on the first night of Ramadan in their home because of the closure of mosques due to coronavirus restrictions, April 23, 2020. (Abed Rahim Khatib/Flash90)
Advertisement

TEL AVIV (JTA) — On Friday, the first day of Ramadan, the Al-Aqsa Mosque in Jerusalem was virtually empty. A handful of masked worshippers kneeling on prayer rugs, distanced several feet apart from one another, listened to an imam who stood atop an 18-foot wooden pulpit.

“We ask God to have mercy on us and all of humanity and to save us from this lethal pandemic,” the imam said.

The ban on mass communal prayer in Israel and the Palestinian territories is among the sobering restrictions accompanying Islam’s holiest month, during which Muslims fast during daylight hours and typically pray, feast and socialize with extended families at night. Israel’s emergency coronavirus measures have closed mosques, shuttered shops and implemented nighttime curfews in many Muslim-majority cities.

But many of Israel’s 1.5 million Arab citizens say it’s nowhere near enough. Ahead of the monthlong holiday, a period during which families often celebrate together in the dozens or hundreds, most Arab-Israeli towns and villages fear a coronavirus peak is still ahead — and some are making an unprecedented plea for more government intervention.

“The Israeli government can’t leave our villages in a state of chaos,” said Mudar Yunes, who heads the local council in the northern Arab-Israeli town of Arara and chairs the association of Arab local councils.

Out of desperate worry that the coronavirus will ravage Arab towns over the next month, he has been asking for help from bodies normally regarded in his town with suspicion: the Israeli police and the army.

Yunes is petitioning for more patrol cars, more Home Front Command soldiers to deliver groceries to the elderly, and other forms of manpower to break up large and potentially dangerous Ramadan gatherings.

“We don’t want them coming in just when we have protests, with violence, but to come in and make order,” Yunes said. “There are lawbreakers, who need to be taken care of.”

The pandemic hit Arab-Israeli cities and towns some three weeks later than the rest of Israel, and it remains relatively contained there for now, according to government data. Israel in total has reported more than 15,400 cases of COVID-19 and 202 deaths. There are 809 confirmed cases among the Arab population, according to the emergency committee monitoring the coronavirus crisis in Israel’s Arab community — but that’s likely a modest number, as it does not include mixed Jewish-Arab cities or eastern Jerusalem, which is home to more than 350,000 Arabs.

The Purim holiday, which brings Jewish communities together for a night of feasting and partying, has been identified as a key spreader of the virus among Jews around the world. It took place in early March, just as the COVID-19 virus was picking up speed. 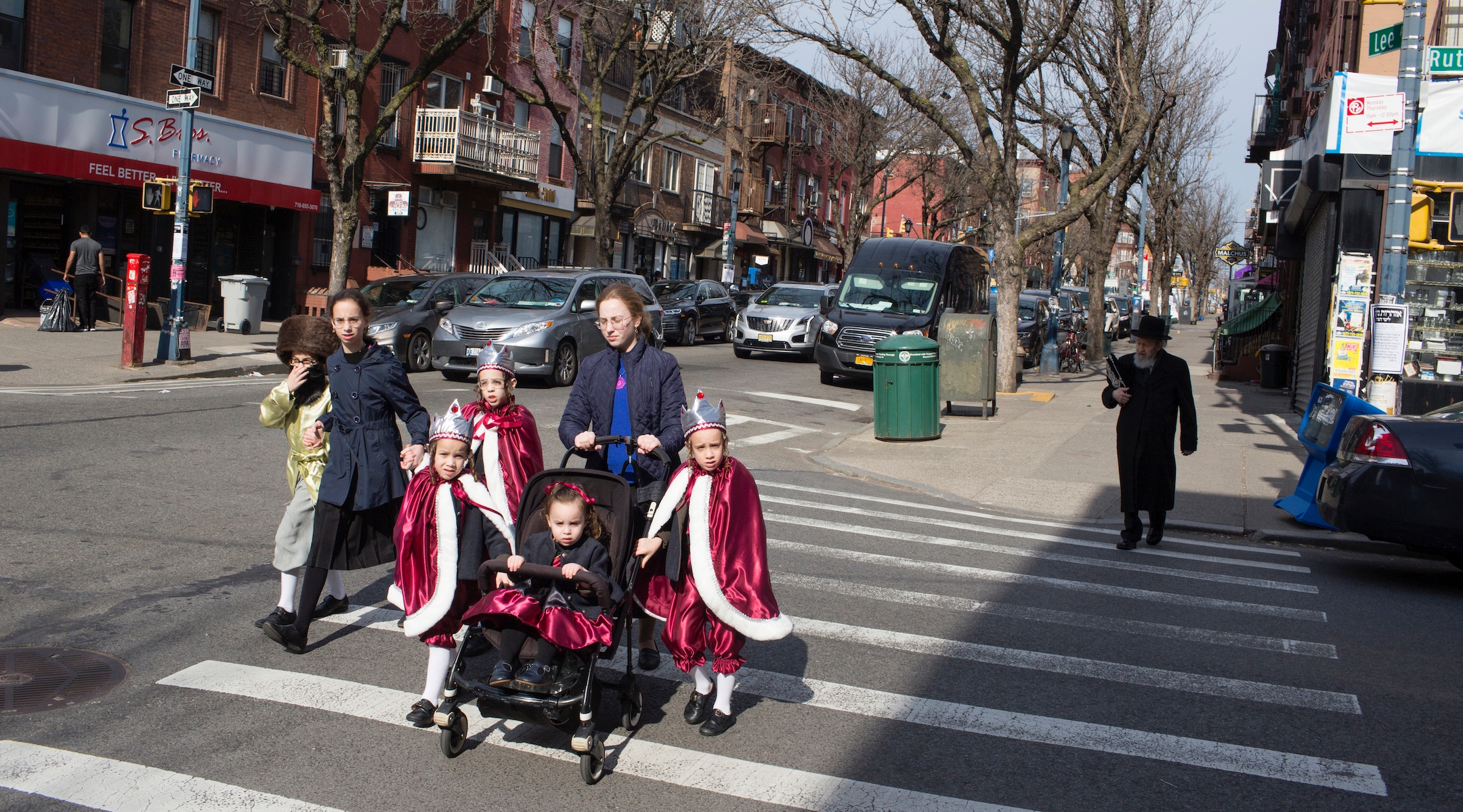 A Hasidic family is dressed up for Purim in the Brooklyn neighborhood of Williamsburg, March 10, 2020. (Andrew Lichtenstein/Getty Images)

Prime Minister Benjamin Netanyahu used that evidence as justification for locking down the country on the eve of Passover earlier this month.

“On Purim, the virus spread. I’m telling you now clearly, Pesach will be not be Purim. Every family will do Pesach with their immediate family,” Netanyahu said.

A “war room” in the northern Arab town of Shfaram hosts daily discussions between the Committee of Arab Mayors and Ayman Sayyaf, head of the Interior Ministry’s Coronavirus Directorate for the Arab population. Following a meeting of Netanyahu and municipal leaders from large Arab towns, the ministry announced on Thursday that Israel would distribute an emergency aid package of 55 million shekels (about $15.6 million, including 30 million shekels in food coupons) to 73 Arab local authorities.

“We want, first and foremost, to safeguard your lives,” Netanyahu said Friday in a Ramadan video tweet. “For the sake of saving your lives and for the sake of your loved ones, and for your and everyone’s future, celebrate with your nuclear family, and only with them.”

Testing, however, remains few and far between, with only a handful of mobile clinics dispersed throughout Arab areas.

“Our estimations show that we have fewer infections than in the Jewish sector, but I hope we’re not deluding ourselves,” Mamoun Abd Alhay, the mayor of the Arab town of Tira, told Channel 12 News in early April. “Either way, the number of tests needs to be significantly increased in order to find out what’s really going on.”

Since a reported leveling off of cases in recent days, Israel has launched an exit strategy. But as drive-thru testing sites are only arriving now in Arab towns, new epicenters of contagion are emerging.

Among them is Deir Alassad, an impoverished village in the Galilee. The first transmission there is believed to have come from a rabbi and kosher supervisor who worked alongside village residents in a local chicken slaughterhouse. The town’s first coronavirus-related death was reported on Sunday.

The likelihood of infection within an extended family is particularly acute among Arabs, who live alongside several generations within a single household, especially in traditional villages. A report by the Israeli Health Ministry found that in the northern cities of Umm al-Fahm and Jisr al-Zarqa, 78 percent of confirmed coronavirus cases were within the same family, while smaller communities like Bir al-Maksur and Maghar found 100 percent of the cases within the same family.

Thabet Abu Rass, a resident of the central village of Qalansuwa in central Israel and the co-executive director of Abraham Initiatives, an NGO that promotes Jewish-Arab partnerships, has applauded some government initiatives. In a Facebook campaign, he praised the official Israeli directive for all stores, except for pharmacies, in Muslim-majority towns to remain closed from 6 p.m. to 3 a.m. throughout the month of Ramadan.

But Abu Rass said that as Israel loosens its restrictions in the coming weeks, it could exacerbate an already simmering restlessness among Muslims who are entering their third month of lockdown.

There is also the economic angle: Studies show that about half of all Arab Israelis live under the poverty line and all have a lower life expectancy than their Jewish neighbors. Israel Border Police officers speak with a man at the Damascus Gate in Jerusalem’s Old City during the first day of Ramadan, April 24, 2020. (Yonatan Sindel/Flash90)

With the long-term risks in mind, Hanady Azoni, a bakery owner in the central Arab town of Jaljuliya, said that most of his neighbors are committed to social distancing over the holiday.

“The feelings this year are strange, there’s tons of disappointment and frustration,” Azoni said. “But the month of Ramadan is important to us as a month of worship and prayer and fasting, more than any business.”

“We are not ready to deal with this kind of crisis”

Muslim community and religious leaders have taken it upon themselves to intensify restrictions in the hope of discouraging people from congregating. Since March, the Muslim Islamic authorities have made the “painful” decision to keep the gates of the Al-Aqsa Mosque closed to worshippers, according to a statement by the Jerusalem Waqf, which oversees management of the compound. The Grand Mufti of Jerusalem and the Palestinian territories, Muhammad Hussein, advised against the public sighting of the crescent moon, which is used to estimate the start of the holy month.

Via WhatsApp groups, communities are rolling out piecemeal campaigns to get news updates and instructions, and organize food deliveries to those who must go into quarantine. But with often shoddy internet connections and mostly an internet-averse elderly population, the message isn’t always delivered.

On Friday, Abu Rass said that around a hundred people were gathered outside the local mosque in his village of Qalansawa. Among them was his 75-year-old neighbor, a retired teacher who has gone to the mosque five times a day on a regular basis and had not yet received updates about the ban on communal prayer during Ramadan.

“Jews, in large part, were in the army, they live an emergency life because of the wars,” Abu Rass said. “We are not serving in the army, we are not ready to deal with this kind of crisis, our local municipalities are not strong enough and don’t have the experience.”

Since the coronavirus lockdown began last month, domestic violence has risen in the Arab community and many children have also stopped receiving education, as a third of Arab-Israeli children don’t own the computers needed for remote learning.

Despite the challenges, Abu Rass thinks this time could lead to increased cooperation between Arabs and the Israeli government.

“Arabs are knocking on the doors of the country, struggling for equality and integration,” he said. “This is an opportunity to build trust.”