‘Keeping the Faith’ is 20 years old. Rabbis and priests look back at the interfaith romcom that was ahead of its time. 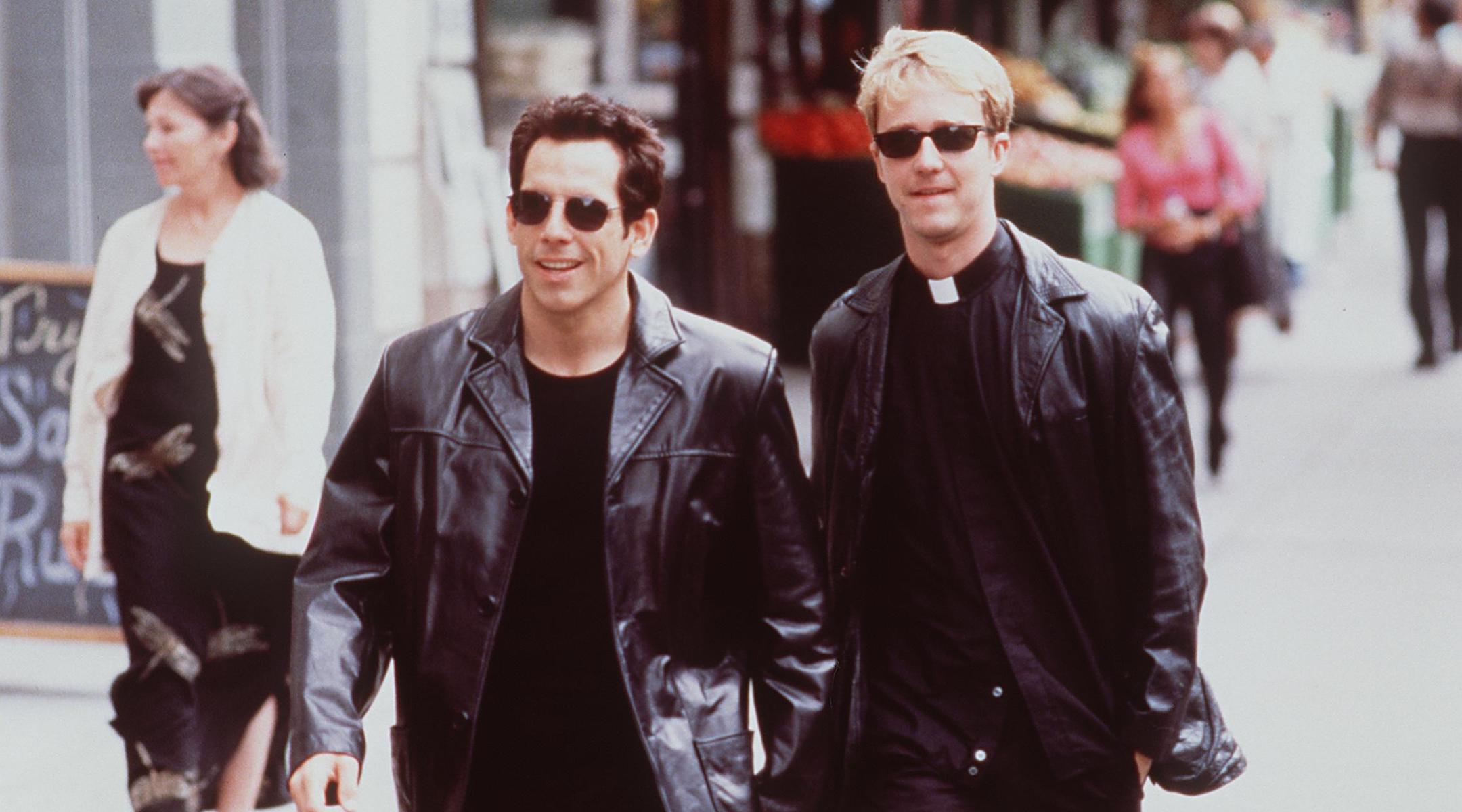 Ben Stiller and Edward Norton as rabbi and priest in "Keeping the Faith," which premiered in 2000. (Getty Images)
Advertisement

(JTA) — It sounds like an old joke, about a rabbi and a priest walking into a bar.

But “Keeping the Faith,” a romantic comedy released 20 years ago this month, stretched the premise into one of the more clever films of its genre, and the rare Hollywood movie that takes questions of religious faith and obligation seriously.

“Keeping the Faith” was the directorial debut of actor Edward Norton, from a screenplay by the Jewish writer Stuart Blumberg, who had been Norton’s roommate at Yale. Set on New York City’s heavily Jewish Upper West Side, the film stars Ben Stiller as Jake Schram, a young bachelor Conservative rabbi, and Norton as Father Brian Finn, a Catholic priest and Jake’s lifelong best friend.

When their childhood friend Anna Riley (Jenna Elfman) comes back to town for work, both clergymen develop feelings for her, which in both of their cases is forbidden — for Brian because of his priestly vow of celibacy, and for Jake because his synagogue would not approve of him dating a non-Jew. Nor would his mother (Anne Bancroft), who became estranged from her other son following his marriage to a gentile.

“Keeping the Faith” is smart enough to realize that these aren’t the sort of silly contrivances that keep couples apart in movies — they are serious questions involving vows, obligations and religious beliefs. Stiller’s rabbi character — a youngish guy whose bearing on the bimah often resembles that of a stand-up comedian — is a familiar one to many American Jews.

The film is also uniquely attuned to the specific anxieties of being an unmarried junior rabbi at a synagogue in New York City in the early 21st century (the synagogue scenes were filmed at B’nai Jeshurun). Rabbi Jake fights with the president of his board, he disagrees with the cantor over whether it’s right to have a gospel choir sing “Ein Keloheinu” and he’s constantly fighting off mothers seeking to set him up with their daughters.

Keren McGinity, a Jewish lecturer of American studies at Brandeis University, describes “Keeping the Faith” as one of her favorite romantic comedies. She has included the film on her class syllabus and discussed it in her book “Marrying Out: Jewish Men, Intermarriage, and Fatherhood.”

How true is “Keeping the Faith” to the reality of clerical life in America 20 years later?

We asked some real rabbis — and priests — about their thoughts on the matter. 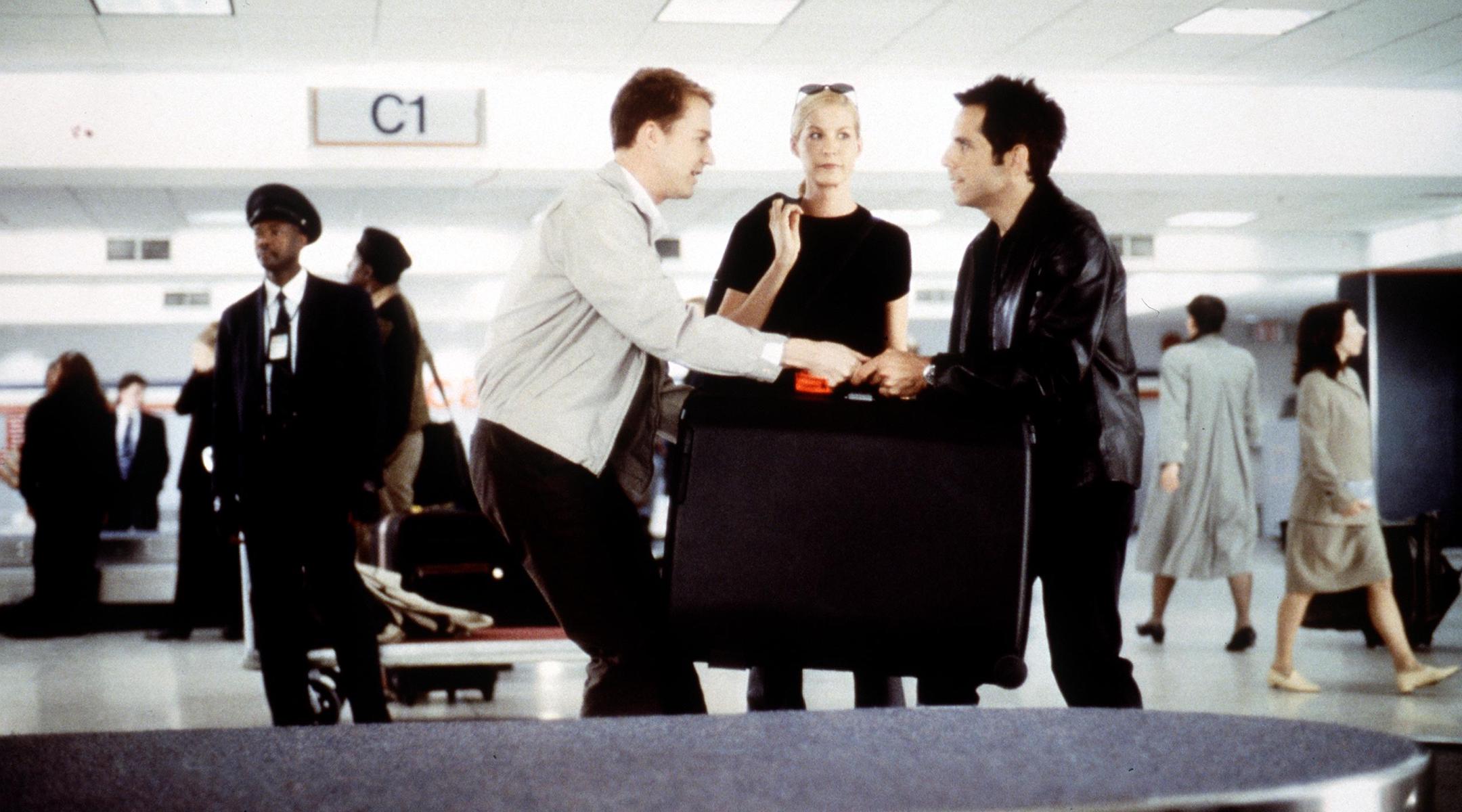 Rabbi Hillel Norry, Atlanta (who served as a rabbinic consultant for the movie): “I met with Ed Norton, and they asked if I would be their consultant.  … I said I do want to do it, but I need to see the script and I need to know that it’s not disrespectful to rabbis and Judaism. They sent me a script, and I signed on, and I actually really like the story.”

Rabbi Howard Jaffe, Temple Isaiah, Lexington, Massachusetts: “It was one of the most realistic presentations of a rabbi’s life I have ever seen. Having been single for the first 9 1/2 years of my rabbinate, I could absolutely relate to what it was like to be a single rabbi and to go through with what he dealt with. Fix-ups, pressure from the community, etc.”

Rabbi Marci Bellows, Congregation Beth Shalom Rodfe Zedek, Chester, Connecticut: “One of my favorite movies, and I felt it really represented much of what I was feeling early on as a young assistant rabbi in Manhattan. As a single woman rabbi, trying to date and feeling like you’re under a microscope was very real.”

Norry: “The priest and the rabbi — not only are they friends, but they’re very real people. They’re not like these saintly, gray old men who are very unrealistic. They’re also not criminals, or mobsters or pedophiles, or some other trope of the bad priest or the bad clergy. They’re just normal people who are flawed, and you see their flaws unfold in the context of their faith, their faithfulness and their friendship.”

Rabbi Rafi Cohen, Masorti Olami, New York: “I think what the movie really tries to do, it tries to capture Jewish life in Manhattan. Imagine Gen Xers in New York City — that’s what they were trying to do. They were trying to be hip and cool. The rabbi and priest were trying to conduct themselves and offer what would be compelling to Manhattanites and urbanites.”

Rabbi Joseph Black, Temple Emanuel, Denver: “If I was an assistant rabbi, and at the end of a service I said to the cantor, ‘Hold on a minute, change of plans … forget about the song YOU want to sing, I’ve got something better,’ I would be fired the next day.”

Norry: “One critique I’ve heard is that [the movie] seems to accept or tolerate interfaith relationships and casual sex relationships for rabbis. … You learn at the end that she’s thinking about converting to Judaism maybe, kinda, sorta. But for the most part, here’s a rabbi who’s involved deeply, and intimately, with a woman who’s not Jewish, and to whom he’s not married. My response to that has always been, ‘Who do you think we are? Who do you think rabbis are?’ Or these priests — who do you think they are? It’s just an honest portrayal about something and about somebody. Their failings are human failings. The non-Jewish thing? Of course it’s problematic. But that’s why it’s a good story.”

Rabbi Leah Berkowitz, Congregation Kol Ami, Elkins Park, Pennsylvania: “I liked how they had both a horrible Jewish date and a great Jewish date [early in the movie] to show that it wasn’t just that Jake didn’t like Jewish girls. That meant a lot to me as a Jewish girl. In a lot of interfaith romance story lines, the potential partner from the same ethnicity is a horrible caricature.”

Father Paul Garrity, Lexington Catholic Community, Lexington, Massachusetts: “Celibacy is a real challenge and I thought the movie did an OK job of dealing with it. The movie was a romantic comedy, so an in-depth look at celibacy was not my expectation.”

Rabbi Emeritus Elliot Gertel, Congregation Rodfei Zedek, Chicago (from his 2003 book “Over the Top Judaism,” reprinted with his permission): “[The film] depicts a rabbi who wants sex and companionship with a Gentile woman but is unwilling to give up his congregation. Schram is able to make the synagogue grow, but the implication at every turn is that the crowd is attracted and misled by superficiality and emptiness. The New Age innovations are praised here but come across as hollow, as does the relationship between the rabbi and his girlfriend.

“The film keeps insisting, even protesting, that Schram is doing a lot of good things, but it says nothing good about him and about his constituency. The synagogue members are either throwing their daughters at the rabbi or involved in trendy spirituality or in self-promotion. The senior rabbi, played by Eli Wallach, is a seasoned lackey with no real advice to offer.”

Bellows: “I especially love that Jenna Elfman’s character converts in the end.”

Jaffe: “In truth, most of my non-Jewish friends are Christian clergy.”

Rabbi Emeritus Norman Cohen, Bet Shalom Congregation, Minnetonka, Minnesota: “It reminded me of how blessed I have been to have so many close colleagues of other faiths, who remind me that we are all in this together. We often share stories of congregants and their issues and opportunities to play such a significant role in their lives at critical times. Can’t say we ever competed for the same women!”

Father James M. Hayes, SJ, associate chaplain for mission, College of the Holy Cross: “[Rabbi Norman Cohen] and I are dear friends but since are both 70, a woman is not going to get between us.”

Rafi Cohen: “If you look back on 20 years ago vs. today, I can certainly say within the rabbinate, establishing positive interreligious relations is very important. These relationships help any clergy person respond to acts against their faith community, whether it be anti-Semitism or graffiti on a mosque or church. When things aren’t so good — you want those relationships … You may not share sermon ideas, necessarily, but you have commonalities. We all have the same challenges and blessings, and issues that you work with.”

Garrity: “The rabbi friendship is very real. I can attest to that in my own life. The movie friendship antedates their professions, so that is a little different.”

Berkowitz: “It always seemed like a joke, a priest and a rabbi, but I have a daily check-in with a Jewish chaplain and two Episcopal priests, and that need for mutual understanding is very real.”