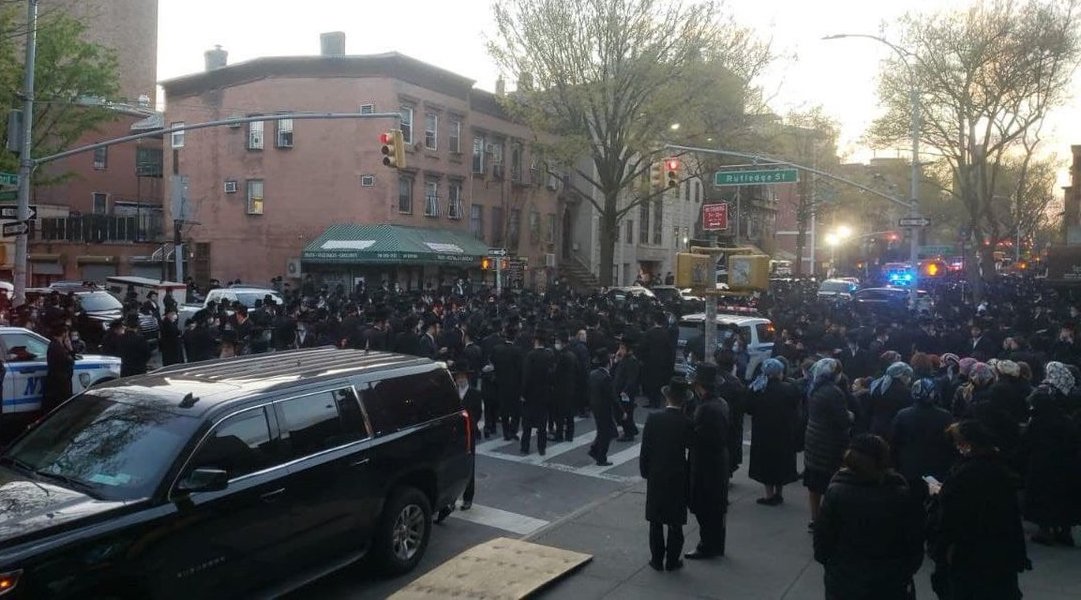 (JTA) – New York City Mayor Bill de Blasio drew fierce criticism late Tuesday after he singled out “the Jewish community” in a trio of tweets announcing that he had instructed his police department to fine or even arrest social distancing violators.

De Blasio was responding to a funeral that had drawn hundreds of Orthodox Jews to the streets of Williamsburg, Brooklyn, to mourn a rabbi who died of the coronavirus.

Pictures of the funeral procession, first shared by Reuven Blau, a reporter for The CITY, showed streets densely packed with mourners who were later dispersed by city police officers. The synagogue of the rabbi who died, Chaim Mertz, later released a statement saying it had expected mourners to follow social distancing rules and regretted that they had not.

RELATED: NY police helped coordinate the Brooklyn funeral that drew hundreds of Orthodox Jews — but they admit things got out of hand

“Something absolutely unacceptable happened in Williamsburg tonite: a large funeral gathering in the middle of this pandemic,” de Blasio tweeted. “When I heard, I went there myself to ensure the crowd was dispersed. And what I saw WILL NOT be tolerated so long as we are fighting the Coronavirus.”

A second tweet followed immediately afterward: “My message to the Jewish community, and all communities, is this simple: the time for warnings has passed. I have instructed the NYPD to proceed immediately to summons or even arrest those who gather in large groups. This is about stopping this disease and saving lives. Period.”

The second message drew swift criticism from Jews and others who said de Blasio had unfairly targeted New York Jews, the majority of whom are following distancing rules. Critics said de Blasio ran the risk of inflaming anti-Semitism just months after a spate of violent attacks on Jews in the city and at a time when the Orthodox community is mourning many of its own losses from the coronavirus pandemic.

“Mr. Mayor, your words are unacceptable,” tweeted Kalman Yeger, an Orthodox Jewish member of the New York City Council. “To condemn our entire community over one group of people is something you would not do to any other ethnic group, and I know you long enough to know that you know this.”

The head of the Anti-Defamation League sounded a similar note. “Hey @NYCMayor, there are 1mil+ Jewish people in #NYC,” CEO Jonathan Greenblatt tweeted. “The few who don’t social distance should be called out — but generalizing against the whole population is outrageous especially when so many are scapegoating Jews. This erodes the very unity our city needs now more than ever.”

Hey @NYCMayor, there are 1mil+ Jewish people in #NYC. The few who don’t social distance should be called out — but generalizing against the whole population is outrageous especially when so many are scapegoating Jews. This erodes the very unity our city needs now more than ever. https://t.co/jcYO9QQred

Some of de Blasio’s critics acknowledged that the large crowd at the funeral had been a mistake. David Hazony, a prominent Israeli-American writer, criticized the mayor but noted that “any rabbi who doesn’t ban gatherings in middle of a pandemic is not just a hilul hashem,” Hazony tweeted, using the Hebrew term for a desecration of God’s name. “He is physically endangering everyone else. Knowingly.”

Some noted that the mayor had not responded similarly earlier Tuesday when New Yorkers gathered in parks to watch military planes fly over the city in a show of support for city workers. Others pointed to the mayor’s own habit of walking in Brooklyn’s Prospect Park, where crowds sometimes gather on sunny days in spite of social distancing guidelines.

“The Blue Angels flyover in NY City today was beautiful, but I didn’t see any outrage over the lack of social distancing. That reaction is reserved for Jewish weddings & funerals,” tweeted Joel Petlin, who runs the school district in Kiryas Joel, a Hasidic town north of the city. “Two wrongs don’t make a right, but only one wrong makes the news and the condemnation of politicians.”

And some of de Blasio’s detractors on the political right used the tweet as an opportunity to score points against him. Texas Sen. Ted Cruz and FOX News commentator Laura Ingraham were among the national figures who criticized the progressive mayor’s message.

The episode comes as New York City’s Orthodox population reels from the coronavirus, which has ricocheted through Hasidic neighborhoods in Williamsburg, Crown Heights and Borough Park. Those neighborhoods have had high rates of infection and at-home deaths, and some prominent community leaders have fallen victim to the virus.

The synagogue of the rabbi being mourned, Kahal Tolath Yakov, issued a statement overnight saying that it regretted both what had happened at the funeral and afterwards, according to a Twitter account that distributes news about Hasidic Williamsburg.

“We understand Mayor Bill de Blasio’s frustration and his speaking out about the gathering,” said the synagogue’s secretary. “We thought that the procession will be in accordance with the rules, and we apologize that it turned out otherwise. It also hurts that this led to singling out the Jewish community, and for that we apologize to all Jewish people.”

Six minutes after the tweet that ignited the firestorm, de Blasio posted a final message about the night’s events, this one addressing social distancing violators broadly and explicitly not singling any population out.

“We have lost so many these last two months + I understand the instinct to gather to mourn. But large gatherings will only lead to more deaths + more families in mourning,” he wrote. “We will not allow this. I have instructed the NYPD to have one standard for this whole city: zero tolerance.”

As angry responses to the previous tweet continued to flow in, that message drew few reactions.