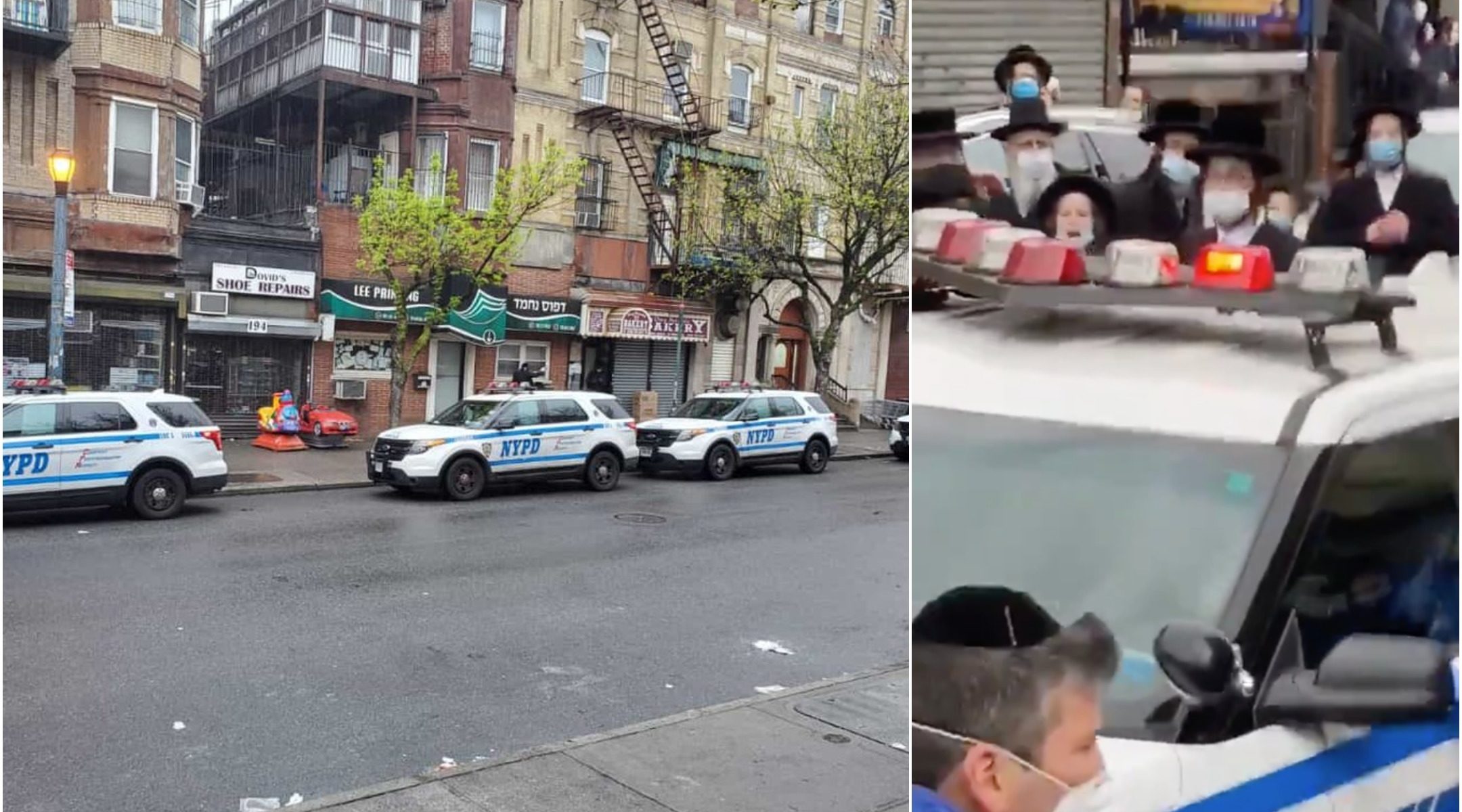 (JTA) – Two days after New York City’s mayor called out “the Jewish community” when vowing to crack down on gatherings, city police intervened in another funeral in a Jewish neighborhood, resulting in a tense scene and at least one arrest.

A video shared on Whatsapp showed a chaotic scene on a street corner in the heart of Borough Park, with a Judaica store visible on one corner of the street.

Dozens of police officers directed a large group of visibly Orthodox Jews away from the area, many of whom wore masks and stood in the street. Some were crowded together behind yellow police tape.

Someone off-camera can be heard in the video. “This is getting violent over here, they just arrested somebody,” he said.

Some of the videos of the Boro Park incident which were posted to Twitter on Thursday have since been made private. The account that posted them, @hasidic_1, tweeted Friday explaining that the posts were not intended to cause a desecration of God’s name and were therefore made private.

The episode comes two days after a funeral for a Hasidic rabbi in Williamsburg drew at least a thousand people to the streets in violation of social distancing rules imposed to stop the spread of the coronavirus, which has hit the city’s Orthodox Jewish population hard. Despite the New York Police Department’s knowledge of the funeral beforehand, the crowd grew unmanageable and ultimately was dispersed by police, who issued 12 summonses in the process.

The event also drew the censure of Mayor Bill de Blasio, who came to the scene to help disperse the crowds and later addressed “the Jewish community” on Twitter, saying that “the time for warnings has passed.” The mayor was widely criticized for singling out the Jewish community.

Reports from across Brooklyn on Thursday suggest that the city is making good on its promise and that, at least in part of the Orthodox community, the mayor’s warnings may not have had the intended effect.

In the Borough Park episode, the NYPD heard that a car carrying a body would be passing through the intersection so family members in the area could recite prayers, according to Yeshiva World News, an Orthodox news website. Concerned about possible large crowds, the NYPD dispatched officers to the area but, when they tried to limit the assembly to family only, chaos erupted. A spokeswoman for the NYPD confirmed that one 17-year-old boy was taken into custody and issued a summons for disorderly conduct.

Videos circulating on Twitter and Whatsapp on Thursday showed an increased police presence in two heavily Orthodox neighborhoods in Brooklyn, with Yeshiva World News reporting that as many as 75 tickets were issued to those walking outside without masks or violating social distancing guidelines.

Police also visited several Satmar Hasidic synagogues that were open in Williamsburg on Thursday. No summonses were issued in one study house where social distancing was being followed, the website reported.

But the NYPD issued 10 summonses at two synagogues in South Williamsburg, eight for chaining doors from the inside and three in regard to social distancing, according to an NYPD spokeswoman.

“What’s the matter? You need a mask?” one person asked a man being issued a ticket in one video, offering him a mask from his car.

Another video showed a group of nine police officers walking together on a Brooklyn sidewalk while a Hasidic man in a mask hurried past.

A New York State Senator, Simcha Felder, criticized the police intervention. “Terrorizing people by sending in armies of cops during such stressful times is not helpful at all,” Felder tweeted. “@NYCMayor — we need real leadership. Stop the chaos now.”

In a press conference on Wednesday, NYPD Commissioner Dermot Shea said future violations of social distancing would be met with “stern consequences.”

“Make no mistake, this large gathering … is putting members of my department at risk and it cannot happen and it will not happen,” Shea said.

Editor’s note: This story was updated on Friday, May 1.