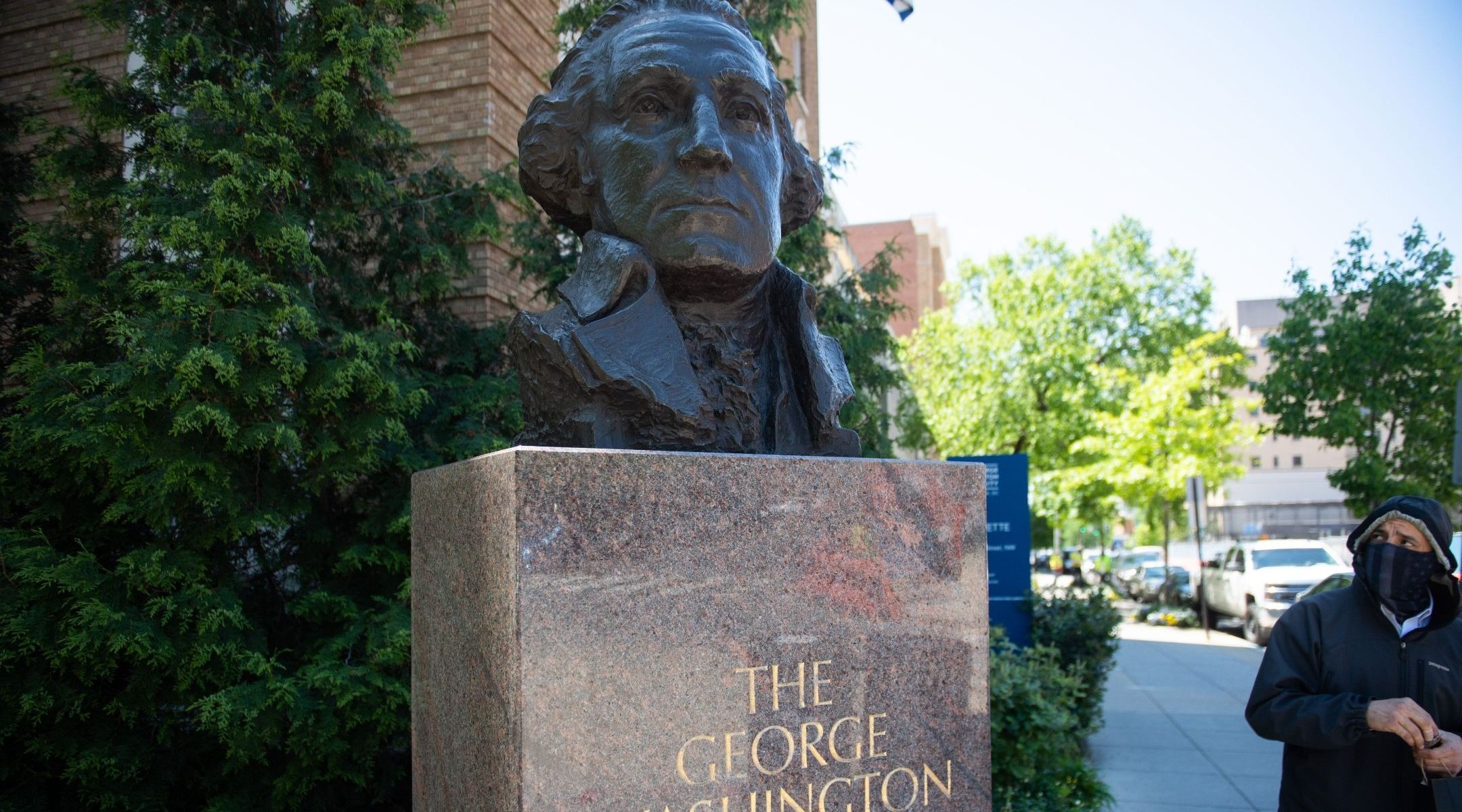 The campus of George Washington University is seen as classes were canceled due to the coronavirus pandemic, in Washington, DC, May 7, 2020. (SAUL LOEB/AFP via Getty Images)
Advertisement

WASHINGTON (JTA) — George Washington University is standing by an interim dean at its foreign policy school who has come under fire for past actions supporting the boycott Israel movement.

A campus group, GW for Israel, launched a petition this week calling for the university to reconsider its recent naming of Ilana Feldman as the interim dean of the Elliott School of International Affairs, the prestigious private Washington, D.C., university’s training school for diplomats and other foreign policy specialists.

Feldman, an anthropology scholar, is currently the school’s vice dean and will serve until a replacement is named. She has joined in calling on the American Anthropological Association to boycott Israeli academic institutions, most recently in 2018.

“Dr. Ilana Feldman has been an active faculty member at the Elliott School of International Affairs since 2007,” the University’s provost, Brian Blake, said Thursday in an email to the Jewish Telegraphic Agency. “As vice dean, Dr. Feldman has demonstrated her leadership ability and her respect for and commitment to all students, faculty and staff of the Elliott School community. Dr. Feldman’s appointment as interim dean was made based on strong support within the Elliott School, including from the current dean, the Dean’s Council, as well as a number of faculty.”

George Washington University is on the record as opposing the Boycott, Divestment and Sanctions movement against Israel, or BDS.

The GW for Israel group named a number of instances that Feldman has backed the boycott Israel movement and argued that her past involvement has the effect of isolating Israeli and pro-Israel students at the university.

“Dr. Feldman is a fervent supporter of the Boycott, Divestment, and Sanctions (BDS) movement and has a record of minimizing terrorism, delegitimizing the State of Israel, and advocating to suspend academic ties with Israeli institutions,” said the petition, which had over 1,200 signatures by Thursday afternoon. “We find it highly problematic that the university selected an individual who has worked to hinder international dialogue and exchange to head ESIA.”

The group did not name instances in which Feldman personally targeted students for being Israeli or pro-Israel, or whether she had created a hostile environment for the students.

Ezra Meyer, the student who initiated the call for Feldman’s removal, said the appointment culminates a year of anti-Semitic activity on campus, which includes an anti-Semitic Snapchat video filmed on campus and a swastika drawn on a Jewish student’s door.

Meyer said the administration’s condemnation of the Snapchat video was lacking, and it was not clear if the students involved faced repercussions. Meyer said the incident engendered a hostile environment on campus.

“It sets a precedent that there will be no consequence, and a month later a swastika was on the door,” he said.

The May 8 GWU news release announcing Feldman’s appointment cited among qualifications “her ‘meticulous research’ exploring the condition of Palestinians in the Middle East.”

The Zionist Organization of America has endorsed the call to remove Feldman.