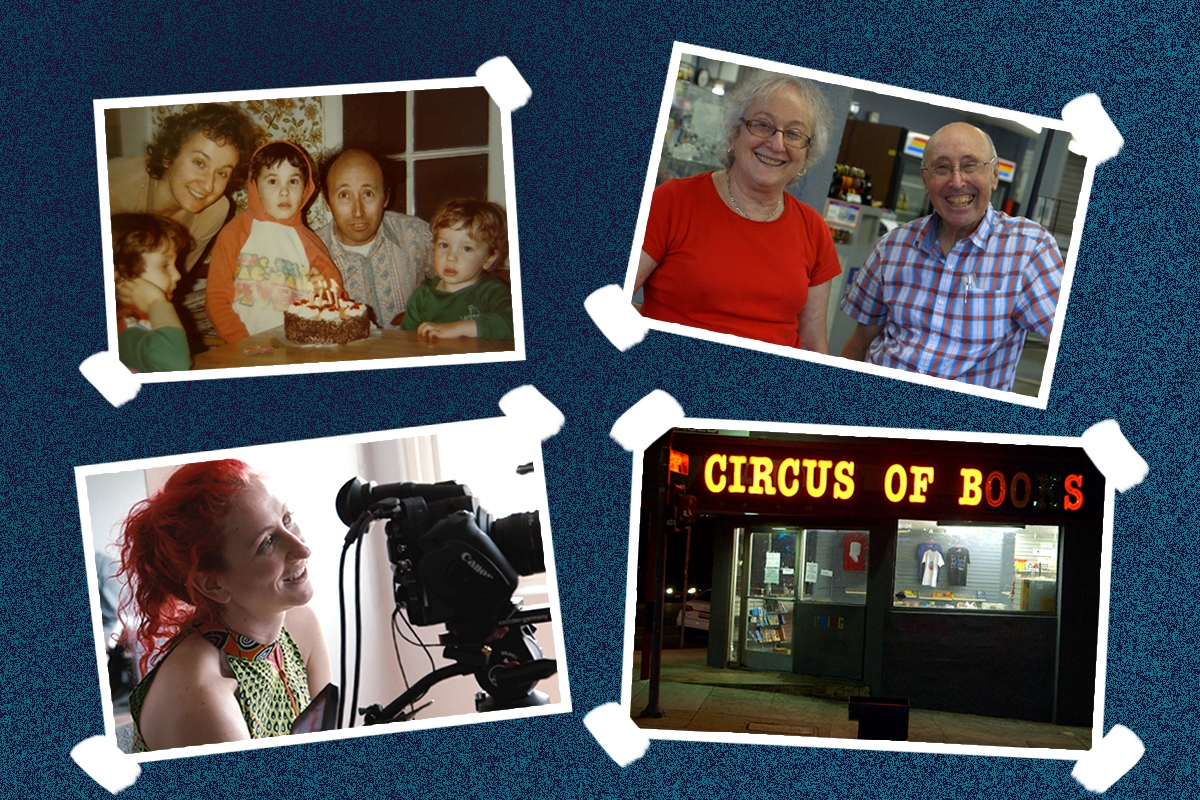 Blissfully unaware of the details of her parents’ controversial business, Rachel Mason and her brothers spun the dreidel and gambled with gelt. It was Hanukkah, after all, and they had no idea the family’s Circus of Books shop was under investigation, let alone what it was the store actually sold.

“My parents really just tried to downplay it, saying that it was just a bookstore, with an over-18 section,” Rachel tells me over email. “And the store itself had that as a cover — the name was in many ways the perfect red herring!”

The story of how Barry and Karen Mason kept the adult store under wraps, hiding things from their children and their synagogue, is the focus of their daughter Rachel’s debut Netflix documentary. In “Circus of Books,” the Masons’ fascinating tale unwinds, revealing a Jewish mom grappling with maintaining her conservative Jewish exterior and the salacious job that kept food on the Los Angeles family’s table.

For Rachel’s parents, “Circus of Books” was just a means to an end: keeping the family afloat. Though they produced pornography, they never watched it, nor did they really involve themselves in the content of their stock. An employee interviewed in the documentary said it best: “It’s like they’re selling apples in an apple cart.” It was just their job.

Throughout their 30 years of working in the adult film biz, the couple became known in the industry as “good, honest, trustworthy people,” which, in the height of the AIDS epidemic, made them a “rare bird.”

I chatted with Rachel Mason about what it was like to make a documentary about her parents’ biggest secret, her need to rebel against Judaism and the family’s “stuffy” synagogue, and how her mother’s constant criticism — “I don’t know why this is worth documenting” — propelled her forward.

Alma: Tell me about your family dynamic and your relationship with your parents. Did you feel like they harbored a secret from you, or were protecting you from X-rated content?

Mason: My mom was the authority figure in the family. She was very domineering and controlling and at the same time, she was looking out for us. I think my mom was protecting us but not necessarily from the X-rated content. I think she felt some nervousness that my brothers and I could become pariahs and excluded from school activities and playdates with friends if other people found out what they did.

What’s your relationship with Judaism? What does your Jewish identity mean to you?

I had a bat mitzvah and I went to services almost every weekend for a while when I was a kid, as well as Sunday School. Being Jewish and culturally conservative was the huge overarching story of my family life, which was totally controlled by my mom. I fought it endlessly, and I really resented the way the religion eclipsed many values that I felt on a personal level. Like the expectation that we were supposed to “marry Jewish” when we went to school with completely mixed kids, and almost none were Jewish. For a long time I resented this strict and unrealistic expectation that was placed on all of us, but now I have come to feel close to the Reform movement and I actually enjoy attending services and find them very healing and powerful because the Reform Movement in Judaism allowed me to find a place where the old traditions could align with my contemporary life.

In the movie, there’s a scene where you try to put a mic on your mom, and she says, “I’m not used to answering people.” She’s painted as an “alpha” who “wears the pants” in the family, and I’m wondering what it was like growing up with such a strong female presence.

I don’t know if it was a strong female presence, per se, that made things difficult, but rather an authoritarian presence, a my-way-or-the-highway style of parenting which made me want to rebel almost instinctively. I also feel like it made me stronger, on the other hand, and very ambitious.

Throughout filming, your mom undermines the documentary’s subject, always saying she didn’t know why you were taping her, and that you should focus on other, more interesting subjects. How did that constant criticism make you feel? When the movie was picked up by Netflix, did that change her attitude?

You have to remember, this is just a constant for me. My mom’s criticism is something that I am used to, and so in a way, it’s my little bit of revenge, I suppose you can say, to reveal just how ridiculous her unfounded criticism are, and how, if I weren’t such a dogged person myself, I could easily have been thrown off my course and not pursued this at all, which truly, she would have very likely preferred. That said, I do love my mother, but I have had to fight her my whole life, and this film was not anything different.

I think today it is so different. Back in the day there were scripts, sets, costumes, dialogue, narrative. Even if it was cheesy, there was some effort put into those movies, whereas today it is just a different, much more quickly produced content which feels more direct. Back then it was a certain kind of art form. And I think it is a different art [today], one that is more improvised.

“Circus of Books” opened during the AIDS epidemic, which many people are comparing to the COVID-19 pandemic we’re currently in. What sort of impact do you hope the documentary has during this strange time?

It is a strange twist that the film release is coming at this very moment, when we all are learning of the brutal realities of a mysterious virus. The film details the role my parents played in making a store that brought joy and pleasure at the most brutal time of the AIDS epidemic for the community that felt it the hardest. I hope this film does something to draw attention not just to my parents, but to all of the many, many unsung heroes in the struggle for LGBTQ rights.

So your friend spilled the beans that your parents ran a gay adult film store. How old were you when that happened? Did you immediately tell your brothers, or feel pressured to keep the secret? When did your parents reveal the whole story?

I was about 15, and I probably told them but I don’t remember. My parents really just tried to downplay it, saying that it was just a bookstore, with an over-18 section. And the store itself had that as a cover — the name was in many ways the perfect red herring!

In the scene when you talk to your brother Josh about coming out as gay, you became flooded with emotion. Talk to me about what you were thinking when he told you he was scared to come out to your parents.

I had always felt free to be who I was. Queer, bisexual… LGBTQ never even felt like enough for me, as I never liked any kind of labels, but I was all for all of it and have called myself almost every letter of the spectrum except T. The idea of “coming out” seemed boring and pointless to me, because I was already a rebel and waiving my freak flag with all of my friends, flaunting drag, dating anyone we wanted and everything else, and my parents didn’t seem to even notice or care, as long as I was coming home in one piece.

But then, I realized painfully that I must have been presenting Josh with a “too gay” version of gayness, which for him, wasn’t at all his vibe. Josh is a quiet, soft-spoken perfectionist who just wanted to be accepted and be “normal.” And I was so busy with my scene of artists and outsiders, that I had no time to even notice what he was going through and that possibly I was contributing to his feeling of alienation, because to be gay is not necessarily to be a wild child.

What was it like to hear about your mom’s reaction to Josh?

It was a revelation to really take in my mom’s homophobic and religious reaction to his coming out, with the condemning words of “God must be punishing me.” Being a boy added an additional layer of pressure that I don’t think women are faced with on a Biblical level, because the bible doesn’t actually come down on women outright for homosexuality.

In one of your Instagram posts I read that “Circus of Books” became way more personal than you intended it to be. Tell me about that journey, and what you set out to make versus the final product.

When I set out to make the film, I didn’t think I should even direct it myself. I worked in tandem with my producer Cynthia Childs to co-direct, but the process really forced all of our hands. The way that interviews would go, often the best lines would come when I was sitting behind the camera, and people like Larry Flynt and Jeff Stryker wanted to talk to only me, and tell me what my parents meant to them. It was very personal. I didn’t initially want to dive so much into my own family, but again, following the story… the story really directed itself. My job as the director was to just guide the ship — the ship being the film — and at many points it was guiding itself.

Have your parents retired? What do they do now?

Their big thing right now is PFLAG. They help other parents. They do specific outreach to other communities that are most in need. They don’t do a whole lot in the adult industry, except they are the owners of the building which housed the West Hollywood store, which became ChiChi LaRue’s, and that is another gay sex-oriented retailer, but a higher end one.