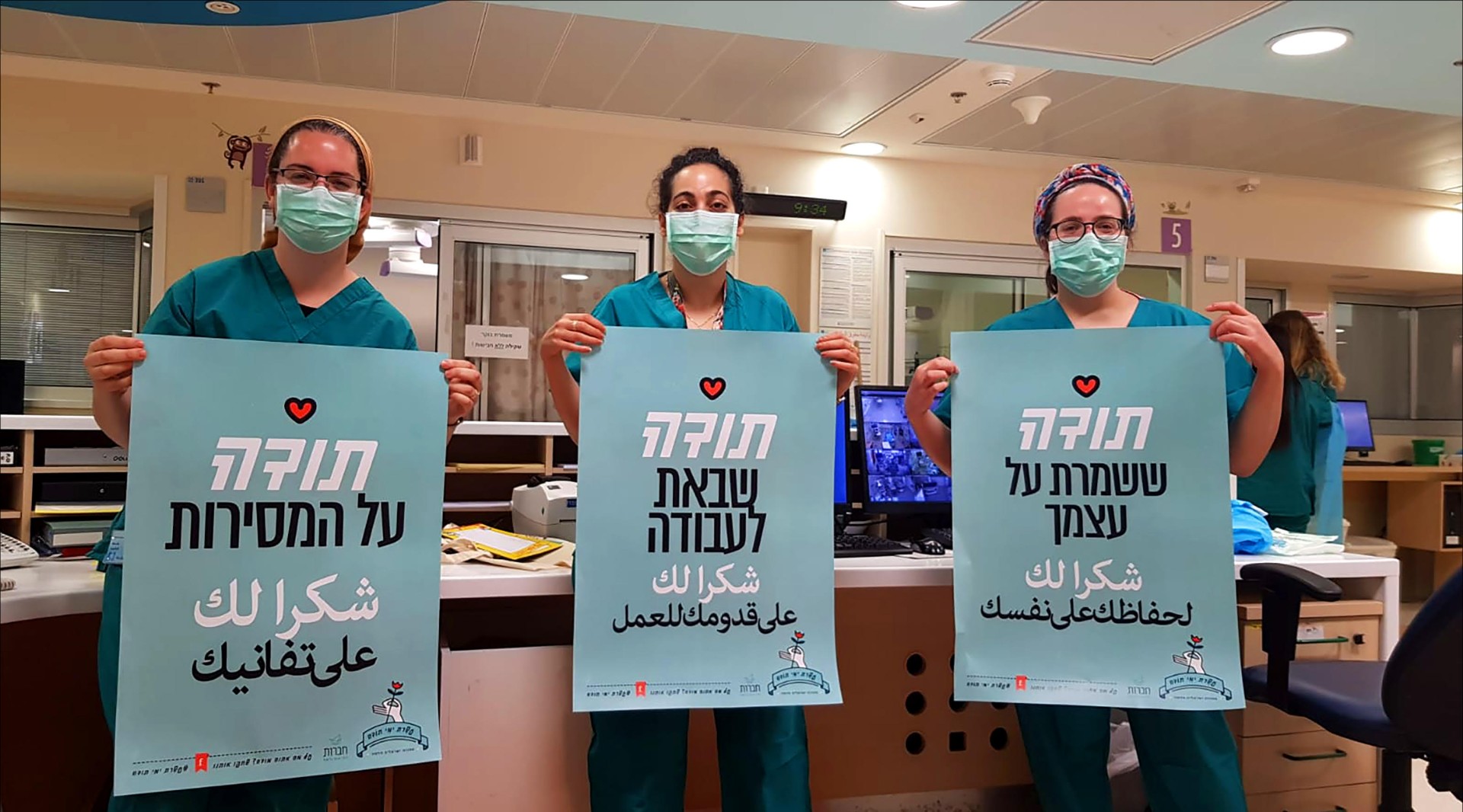 Health care staff at Jerusalem's Hadassah hospital participate in the Days of Gratitude project, holding up signs in Hebrew and Arabic reading "Thank you for taking care of yourself," "Thank you for coming to work" and Thank you for your dedication." (Courtesy of M2)
Advertisement

“One of the ways you find strength is to remember what is still good in your life,” Sandberg said.

During the coronavirus crisis, actress, scientist and author Mayim Bialik has turned to her Orthodox Jewish faith for comfort.

“Thriving in a time of crisis is not new for the Jewish people,” she said. “Many Jews say ‘Modeh Ani’ every morning — a prayer that says I’m grateful even just for the opportunity to wake up.”

Behavioral psychologist Tal Ben-Shahar says being grateful is the key to good health.

“Research tells us that expressing gratitude increases levels of well-being, strengthens our immune system, improves relationships and makes us more resilient,” he said. “We need this now more than ever.”

All three influential Jews are lending their voices to Days of Gratitude, an online project backed globally by M²: The Institute for Experiential Jewish Education. First created in 2012 by the Jerusalem-based nonprofit Beit Prat Leadership Institute, Days of Gratitude featured secular and religious Israelis writing on huge chalkboards what they are thankful for each day.

This year, the nine-day online initiative runs through May 30 and features a rotating menu of activities and prompts, along with daily emails and videos from prominent figures, to help Jewish communities, families, movements, schools and individuals share gratitude. It culminates on the Jewish festival of Shavuot, which will take place on Friday and Saturday.

It’s just one of many innovative ways that Jewish organizations, limited this year by COVID-19, are marking the holiday that celebrates the giving of the Torah on Mount Sinai.

It’s also a sign of how Jews continue to sustain and transform Jewish life even in the midst of a pandemic, and how innovative Jewish organizations are finding ways to adapt to the new circumstances.

“When coronavirus broke out, we realized that this is what the Jewish community needs right now,” said Shuki Taylor, CEO of M². “We are very much turning our attention now to how one can create a virtual, immersive Jewish experience that people can do from their screens. Days of Gratitude is one example of how to create meaningful tactile ideas for Jews, wherever they are.”

Another nonprofit, Moishe House, which supports a collection of homes around the world that serve as Jewish communal activity hubs for young people, also is using the coronavirus pandemic to broaden its influence beyond in-person programs to the online arena.

On Friday night, the organization will kick off a 25-hour marathon of Jewish learning called the Global Shavuot Learning Festival, and on Sunday the group will host Shavuot Night Live, a one-hour biblical comedy show.

“Without coronavirus, everyone would have done programs in their own cities,” said Moishe House CEO David Cygielman. “I don’t think we would have even thought of virtual programming otherwise. But I think it’ll now become a part of who we are, and we’ll push to invest more in the technology and ability to do virtual programming.”

At present, 118 Moishe Houses operate in 28 countries, two-thirds of them in the United States. All are now doing online programming, except for the three that can do in-person activities: in Shanghai, Beijing and Jerusalem.

“We’ve done Shavuot programming before, but the fact that it’s completely virtual this year is of course totally new,” said Rabbi Ana Bonnheim, the interim senior director of Jewish learning at Moishe House and director of the Open Dor Project. “We want to offer people ways to engage with the holiday, as well as opportunities for them to come up with their own programs and initiatives.”

In another initiative that aims to help Jews celebrate Shavuot under this year’s circumstances, Reboot, in association with the Jewish Emergent Network, is hosting Dawn: An All-Night Cultural Arts Festival Celebrating Shavuot, an all-night event from 10 p.m. Eastern time  Thursday to 9 a.m. Friday. Last held 10 years ago in San Francisco and billed as a “reimagining of the Ten Commandments in 2020,” Dawn will feature music, yoga, cooking classes, Torah study, meditation and more via Twitch.

The highlight of the evening will be a performance by guitarist John Schott of “Eight Hours ‘Round Midnight,” a 48-measure composition that invokes the Jewish practices of textual commentary, interpretation and midrash.

“Most Jews don’t celebrate Shavuot or really understand what it is,” said Reboot’s executive director, David Katznelson, who founded Dawn in 2004 along with Amy Tobin. “Given the time we’re in now, we thought what an amazing moment to bring it back and put it all online.”

Founded 18 years ago, Reboot now has 600 members. Its initiatives include the National Day of Unplugging, which since 2009 has encouraged hundreds of thousands of Jews to celebrate Shabbat by taking a respite from technology; 10Q, which offers a new High Holiday opportunity for reflection, gratitude and personal responsibility; and Sukkah City, an international architectural design competition launched in 2010 to coincide with the Jewish holiday of Sukkot.

“In celebration of our Chai year, we have launched a new strategic plan designed to take Reboot into the future. We are refining our focus, doubling down on supporting artists who encourage challenging questions, and reimagining Judaism,” Katznelson wrote in an email to supporters. “We will continue to do what we do best: own the Jewish R&D space by using the power of arts and culture to elevate the Jewish conversation and connect with Jews on the margins.”

Many of the new initiatives being launched amid the coronavirus project are leading to new collaborations and encountering soaring public interest.

More than 7,000 people have accessed this year’s Days of Gratitude project since it went live last Friday, and more than 170 Jewish organizations are among its partners, ranging from Be’chol Lashon, which deals with issues of racial and ethnic inclusivity, to Chabad, the Hasidic Orthodox outreach movement.

“We didn’t expect this to be easy — the idea of having a huge gratitude festival when people are really suffering,” said Taylor of M². “Yet we’ve already had a number of requests to create similar types of initiatives for specific audiences on specific holidays.”

“I think it has a lot to do with the fact that when times are confusing, people want to be rooted,” Cygielman said. “It’s also easier because when you reach people online, you have access to great teachers and you don’t have to go anywhere — but you still have a bit of that human interaction.”