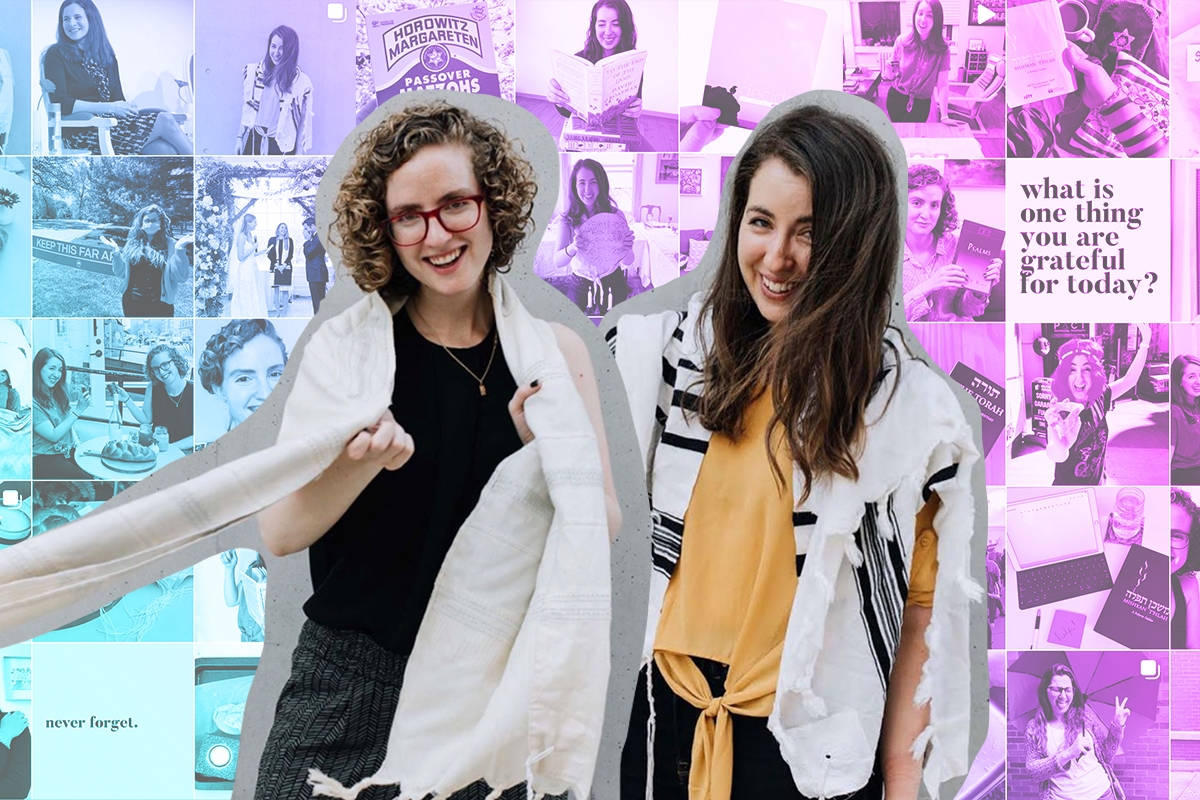 Rena and Samantha, “Sam,” are challenging stereotypes and calming anxieties around coronavirus along the way. When the two rabbinical school friends started the account in 2017, they had no idea that they were inadvertently preparing for prayer during a pandemic. After three years of developing a virtual presence, the duo — who named their platform “Modern Ritual” for accessible traditions of Judaism — is now well-equipped to meet the new need for virtual spiritual support. The two were in graduate school at the Hebrew Union College Jewish Institute of Religion in New York City when Rena had two realizations: 1) There was a need for engaging, beautiful Jewish content and 2) All of the pre-teens she mentored in Hebrew school were obsessed with Instagram.

She recruited her bestie and classmate Sam, and Modern Ritual was born. They run the account in addition to their full-time professional rabbinical roles. (Rena is the incoming rabbi at Temple Sholom in Chicago; Sam is the Rabbinic Fellow at Temple Micah in D.C.)

The pair decided that a main goal of the account would be to change common associations with Judaism.

“When you Google image the word ‘rabbi,’ you will get 600 pictures of Orthodox men,” Rena, 28, tells me over a group Google Hangout with Sam. “We want thousands of people to see images of a young woman wearing Jewish ritual objects and feeling proud.”

The page, with 14,000 followers, is achieving that kind of reach.

And though their initial target audience was teenagers, most of their followers are 25-34 years old, with almost 80% identifying as women, according to Instagram’s audience demographic breakdown.

Rena says she and Sam faced criticism in the early days. Skeptics would reproach their online Jewish content. “Isn’t that vapid, doesn’t that take away from the depth?” Rena says older Jewish adults would often ask.

But the account doesn’t just share stunning photographs of the two rabbis — each in a flowing tallis, or prayer shawl — frolicking in the streets of SoHo. 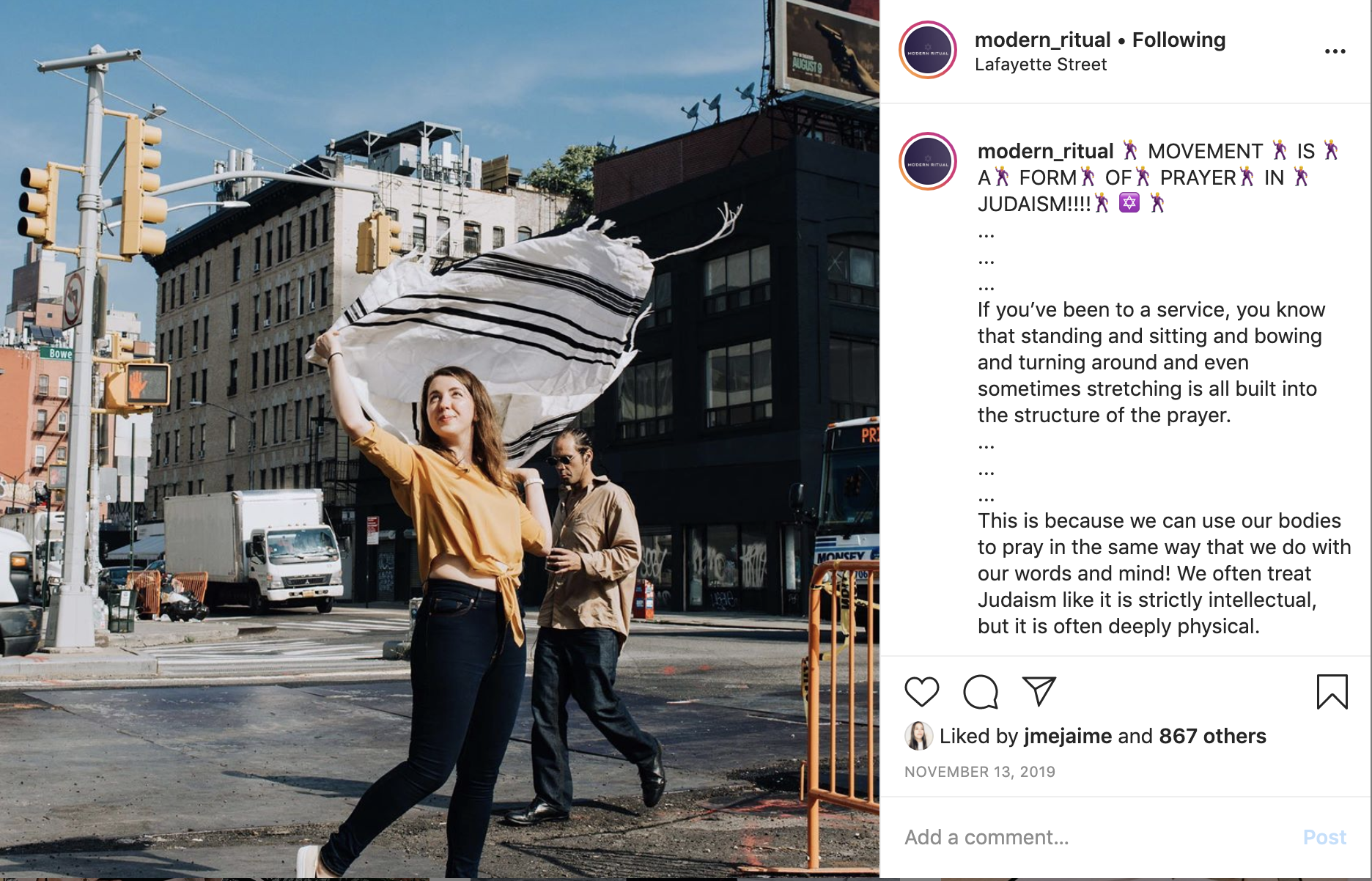 The aesthetically pleasing photos and layout (that grid!) draw viewers into educational captions, which are as varied as book suggestions, Jewish prayers for sickness, and historical explainers of Jewish holidays.

For Sam, the imagery is as important to living Jewishly as the text. She draws inspiration from an often-overlooked part of the Hebrew Bible, the Book of Leviticus.

“There’s a really intense, specific dedication to aesthetics throughout,” Sam, 30, tells me. “Ideas around God include the concepts of splendor and beauty and uphold those values alongside our ability to exercise good judgment and to be compassionate.”

For Modern Ritual, that beauty is celebrated through visually satisfying spirals of tefillin (phylacteries) and shiny egg-washed challahs. “We can take photos that represent Judaism, and then that can be the jumping off point to a caption that’s similarly inspiring and inviting us to consider inner beauty and resonance,” Sam says. And in a pandemic, the invitation to reflect is all the more crucial for spiritual nourishment. While most organizations, businesses, and synagogues have had to find their footing in a transition to virtual engagement, the two-woman show has continued to do what they do best: provide pastoral and emotional support.

For Rena and Sam, Passover became a timely opportunity to soothe people forced to have their seders alone and ease the fears of those who were especially disturbed by coronavirus’ disruption to tradition.

“There’s just been such an intensity to this time, and sadness and grief,” Sam says. “As everyone’s Passover plans had to change, I think people really needed to be seen and heard in their sadness and frustration.”

To offer a sounding board and space for collaboration, Modern Ritual asked people to share their creative Seder plates and saw a flood of comments.

“Realized I had a chicken wing bone in the house this afternoon waiting for garbage day! So I dug it out and boiled it. Yay for zero waste shank bones!” one Instagram user replied.

Having a space to share experiences of unconventional workarounds normalized the ingenuity and breach of tradition many Jews were forced into this year. The comments on the page connect people who, under ordinary circumstances, might not have ever had a dialogue, like a 35-year-old Hasidic mother in Williamsburg and a 28-year-old recent convert in Prospect Heights.

But perhaps one of the biggest perks of being a Modern Ritual follower (other than the feeling of solidarity in craving carbs — did I mention the challah pics?) is an awareness of Shabbat. Working from home can limit our sense of time. Days bleed into nights, weekdays into weekends; there is no defined start or end to the day, but Shabbat helps mark the end of the week. “Shabbat reminds us that each day is not melding into the next, that time is actually passing in a meaningful way,” Sam says.

It also offers an opportunity to rest, to forget about productivity, and to unplug.

“SHABBAT SHALOM FROM US TO YOU,” read one caption, bookended by pink flower emojis. “What can you do tonight/tomorrow to make Shabbat feel a little different from the rest of the week?”

And though the duo wants their viewers to be safe and informed, they hope Modern Ritual posts bring joy and lightness to a heavy and unrelenting news cycle.

“People are totally consumed by hard and difficult information right now. And we want what we’re putting forth to be relevant and real and authentic, but it doesn’t all need to be sad,” Rena says.