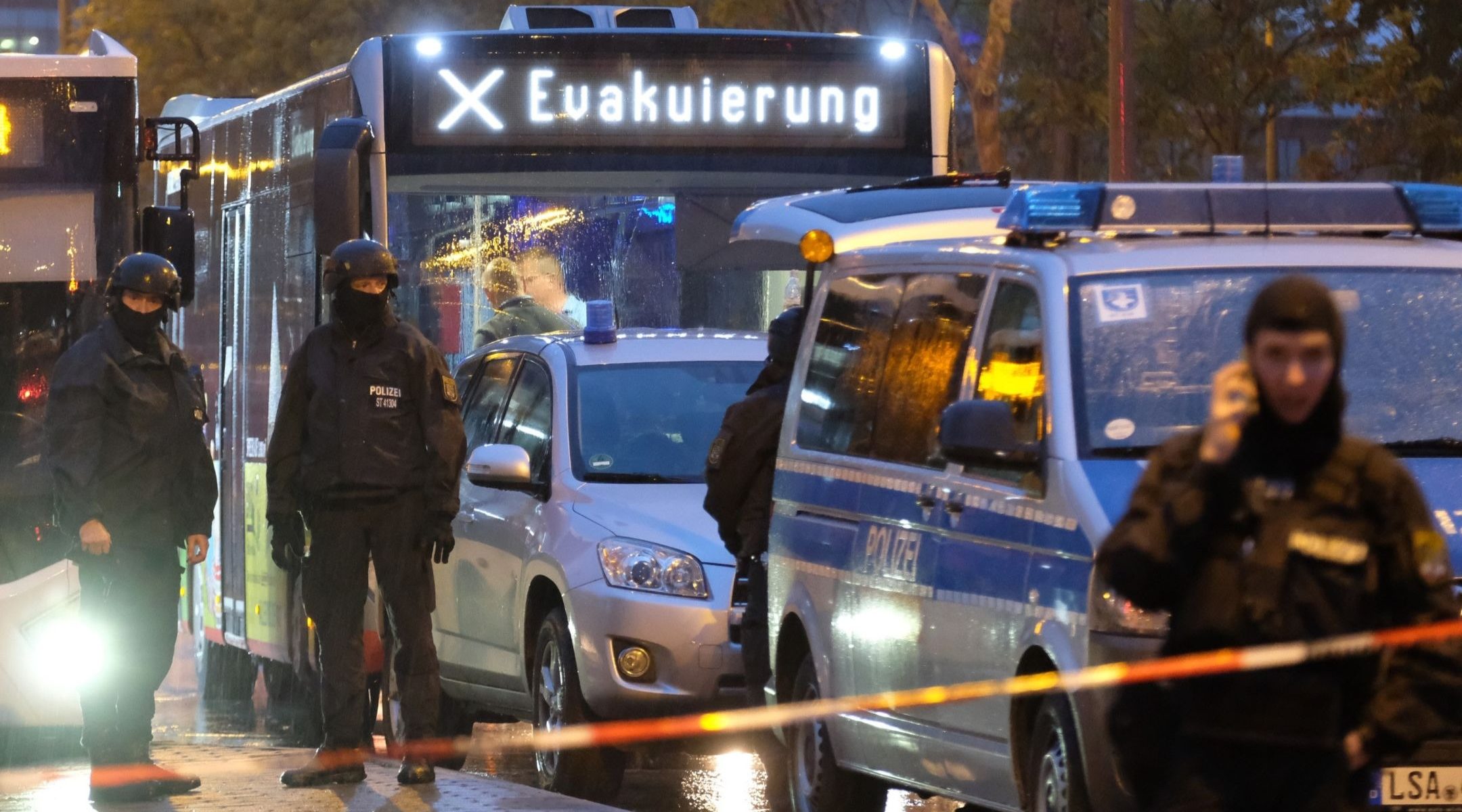 The scene where a shooter killed two passersby near a synagogue in Halle, Germany, Oct. 9, 2019. (Sebastian Willnow/dpa-Zentralbild/dpa/picture alliance via Getty Images)
Advertisement

Police registered 2,032 anti-Semitic crimes, including two killings, in 2019, according to newly released figures published in the German news media. The total is up 13% from 2018.

The vast majority of the anti-Jewish crimes reported, 93.4%, were ascribed to far-right wing perpetrators, though there also was an increase in such crimes from the far left. The crimes range from propaganda incidents such as denying the Holocaust and displaying banned Nazi symbols, to vandalism to murder.

The most violent was the Yom Kippur attack on the Halle synagogue on Oct. 9. The perpetrator, a far-right extremist, shot and killed two passersby after being unable to shoot his way into the synagogue.

Interior Minister Horst Seehofer and Holger Munch, head of the Federal Criminal Police Office, presented the statistics on Wednesday in the annual report on politically motivated crimes, a category launched in 2001. In all, there were slightly more than 41,000 crimes reported, an increase of 14.2% over the 36,000 in 2018.

The report came out on the first anniversary of the politically motivated murder by neo-Nazis of politician Walter Lübcke, district head of the city of Kassel.

Given the likelihood that many anti-Semitic crimes go unreported, “the picture is gloomy,” Josef Schuster, head of the Central Council of Jews in Germany, said Wednesday. He said anti-Semitism on the internet, on the streets and in schools “has become commonplace for Jews in Germany.”

“Unfortunately, the corona crisis has had a reinforcing effect on this,” Schuster added. “Supporters of conspiracy myths and opponents of measures against the pandemic do not even shy away from relativizing the Holocaust.”

Charlotte Knobloch, a former Central Council president, said Wednesday that the May 20 verbal attack on Maccabi athletic trainer Max Brym in a Munich park showed how the pandemic is “providing a new surface for projection of anti-Jewish hate.”

Brym, wearing a blue Maccabi jacket with a Star of David logo, was verbally assaulted by a coronavirus denier and anti-vaccine activist who shouted, “You Jewish pigs are to blame! You Jews did this with Corona! You Jewish bastard!” The attacker then rode off on his bicycle and has not been apprehended.

Annette Seidel-Arpaci, head of the Bavarian branch of RIAS (Anti-Semitism Research and Information Centre), said the assault showed how conspiracy theories are not just visible at public demonstrations against coronavirus prevention measures but are “also directed against people in everyday life.”