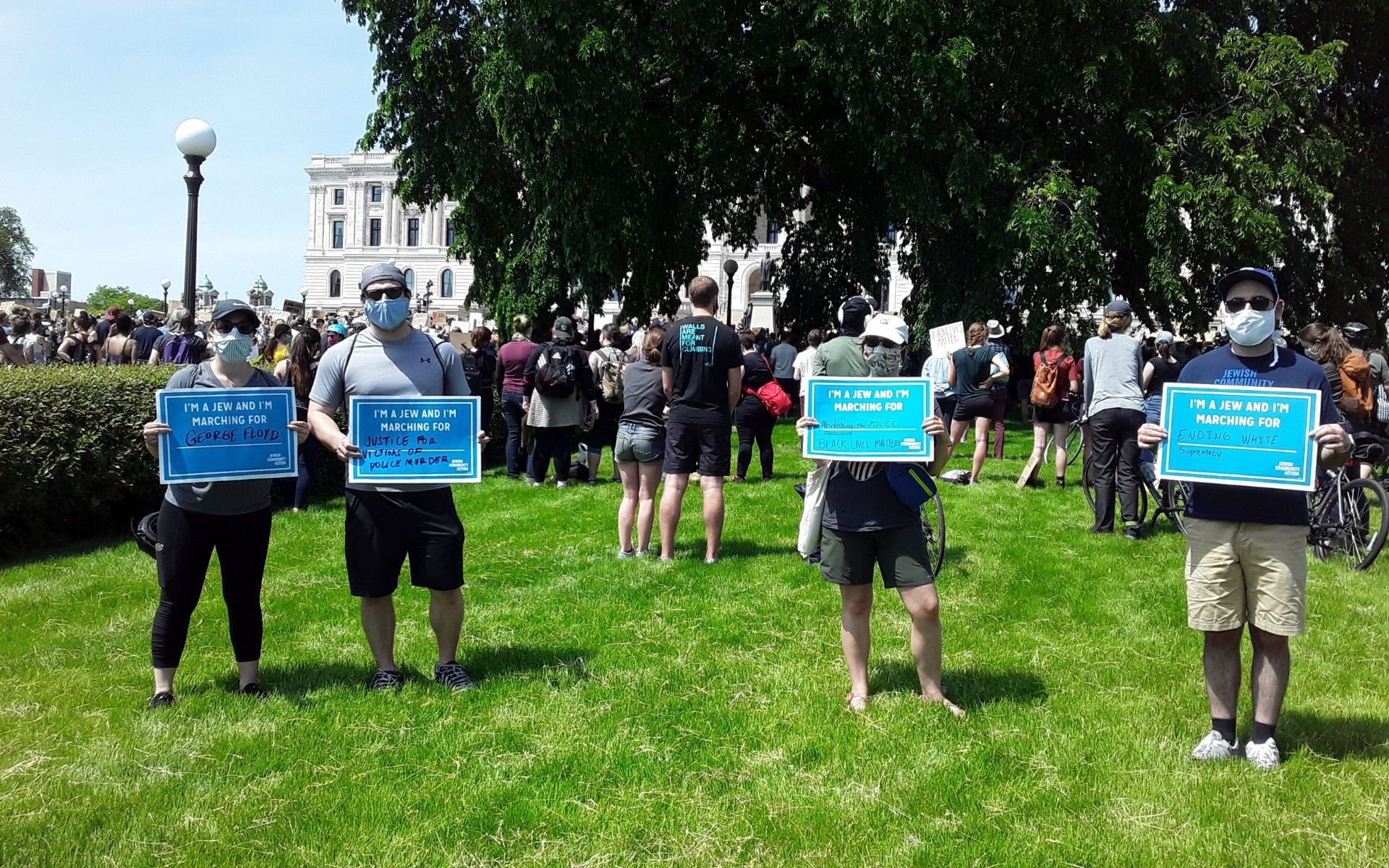 (JTA) – Jewish Community Action, the leading Jewish social justice organization in Minneapolis, was supposed to be closed last Friday for the Jewish holiday of Shavuot.

Instead, its staff started organizing individually as protests broke out all over the city in response to the killing of George Floyd in police custody.

Drawing on relationships the group has built over decades, the staffers worked with other community organizers to protect black-owned businesses from arsonists, help get medical care to injured protesters and feed people in neighborhoods where grocery stores were burned down or looted.

By Saturday night, the organization was back online for a community Zoom Havdalah with reflections from local Jews of color. Now Jewish Community Action, or JCA, is shifting its staff’s entire focus to supporting the protests and protecting black communities.

Executive Director Carin Mrotz said her organization plans to “direct our resources and members to the crisis at hand” at least for the next several weeks.

JCA has long been active on issues of racial justice and policing in Minneapolis, a leader in training local Jews in direct action tactics and advocating for policy change.

Founded in 1995, JCA now has a staff of nine and a budget of about $750,000. One of its founders, Frank Hornstein, is now a member of the state House of Representatives.

“We have a 25-year history of doing deep organizing in the community,” said David Snyder, the organization’s director of organizing. “When you build those relationships, you’re able to move fluidly in a crisis.”

After the 2015 death of Jamar Clark, a 24-year-old black man who was shot in the head by a Minneapolis police officer, JCA responded immediately. Drawing on relationships built through its work on affordable housing, the group brought dozens of members to the protests that followed, which included the occupation of a local police precinct, and helped organize white members of faith communities to form a barrier between black protesters and the police.

After the 2016 death of Philando Castile, another black man killed by police in Minnesota, JCA was involved again in the local protests.

Its decision to focus entirely on responding to the George Floyd protests is a new phase for JCA, which has long dealt with a range of issues, from affordable housing to immigration. For now, all of JCA’s staff is dedicating its time to responding to the protests in Minneapolis.

Mrotz says she sees a shift in the way Minneapolis Jews have responded to the recent protests, which she attributes in part to the involvement of Jewish activists in the protests around the deaths of Clark and Castile.

“It’s horrible that this is happening enough in Minnesota that we can get better about it,” Mrotz said. “Now with George Floyd, I think it’s part of our muscle memory to be showing up.”

A U.S. Department of Homeland Security memo warned this week that anarchists and militia groups could use the riots to commit acts of violence, referencing a white supremacist channel on the messaging app Telegram in which users suggested shooting into crowds of protesters to frame them for the violence, according to Politico.

“Many of the people causing damage were either not from here or were particularly trying to wreak havoc,” said Rabbi Michael Latz of Shir Tikvah, a synagogue on Minneapolis’ south side.

Latz, who is outspoken on issues of social justice and is involved with JCA, spent his Sunday morning with his neighbors cleaning a street that had been covered in ash from the burning buildings in the area before helping out at a food drive where several JCA members and members of his congregation were volunteering.

To Latz, the neighborly spirit that brought Minneapolis residents into the street with brooms on Sunday morning is the same spirit that gets people involved in JCA’s work.

“People in the Midwest in general, and the Twin Cities in particular, are joiners,” he said.